On the Representation Number of Bipartite Graphs 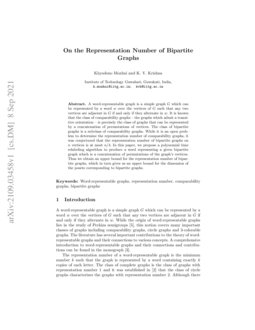 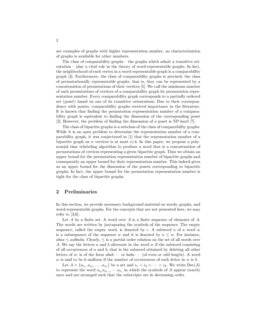 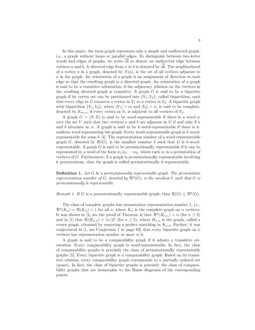 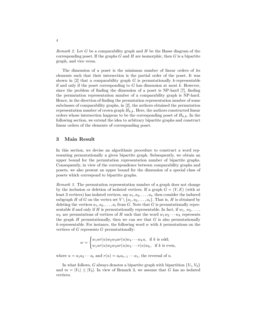 In this section, we provide necessary background material on words, graphs, and word-representable graphs. For the concepts that are not presented here, we may refer to [3, 6].

Let A be a finite set. A word over A is a finite sequence of elements of A. The words are written by juxtaposing the symbols of the sequence. The empty sequence, called the empty word, is denoted by ε. A subword u of a word w is a subsequence of the sequence w and it is denoted by u≤w. For instance, abaa≤aabbaba. Clearly, ≤ is a partial order relation on the set of all words over A. We say the letters a and b alternate in the word w if the subword consisting of all occurrences of a and b, that is the subword obtained by deleting all other letters of w, is of the form abab⋯ or baba⋯

(of even or odd length). A word

w is said to be k-uniform if the number of occurrences of each letter in w is k.

Let A={ai1,ai2,…,aik} be a set and i1<i2<⋯<ik. We write Dec(A) to represent the word aikaik−1⋯ai1 in which the symbols of A appear exactly once and are arranged such that the subscripts are in decreasing order.

In this paper, the term graph represents only a simple and undirected graph, i.e., a graph without loops or parallel edges. To distinguish between two-letter words and edges of graphs, we write ¯¯¯¯¯ab to denote an undirected edge between vertices a and b. A directed edge from a to b is denoted by →ab. The neighborhood of a vertex a in a graph, denoted by N(a), is the set of all vertices adjacent to a in the graph. An orientation of a graph is an assignment of direction to each edge so that the resulting graph is a directed graph. An orientation of a graph is said to be a transitive orientation, if the adjacency relation on the vertices in the resulting directed graph is transitive. A graph G is said to be a bipartite graph if its vertex set can be partitioned into {V1,V2}, called bipartition, such that every edge in G connects a vertex in V1 to a vertex in V2. A bipartite graph with bipartition {V1,V2}, where |V1|=m and |V2|=n, is said to be complete, denoted by Km,n, if every vertex in V1 is adjacent to all vertices of V2.

The class of complete graphs has permutation representation number 1, i.e., Rp(Kn)=R(Kn)=1 for all n, where Kn is the complete graph on n vertices. It was shown in [2, see the proof of Theorem 4] that Rp(Hn,n)=n (for n≥2) and in [1] that R(Hn,n)=⌈n/2⌉ (for n≥5), where Hn,n is the graph, called a crown graph, obtained by removing a perfect matching in Kn,n. Further, it was conjectured in [1, see Conjecture 1 in page 93] that every bipartite graph on n vertices has representation number at most n/4.

Let G be a comparability graph and H be the Hasse diagram of the corresponding poset. If the graphs G and H are isomorphic, then G is a bipartite graph, and vice versa.

The dimension of a poset is the minimum number of linear orders of its elements such that their intersection is the partial order of the poset. It was shown in [2] that a comparability graph G is permutationally k-representable if and only if the poset corresponding to G has dimension at most k. However, since the problem of finding the dimension of a poset is NP-hard [7], finding the permutation representation number of a comparability graph is NP-hard. Hence, in the direction of finding the permutation representation number of some subclasses of comparability graphs, in [2], the authors obtained the permutation representation number of crown graph Hk,k. Here, the authors constructed linear orders whose intersection happens to be the corresponding poset of Hk,k. In the following section, we extend the idea to arbitrary bipartite graphs and construct linear orders of the elements of corresponding poset.

In what follows, G always denotes a bipartite graph with bipartition {V1,V2} and m=|V1|≤|V2|. In view of Remark 3, we assume that G has no isolated vertices.

We demonstrate the relabeling algorithm on the bipartite graph G given in Figure 2. Although the selection of vertices can be arbitrary, here we implemented the algorithm based on their degrees. Accordingly, the vertices of V1, viz., a1,a2,a3,a4 are relabeled, respectively, as c4,c2,c3,c1. Further, the vertices of V2, viz., b1,b2,b3,b4,b5 are relabeled as c7,c9,c8,c6,c5, respectively. The relabeled graph G′ is presented in Figure 2. As per the algorithm, the permutations w1,w2,w3,w4 and w5 of vertices of G′ are produced below. Note that, as N(c3)=N(c4)=V2, w3=w4=ε and further w5 will be nonempty.

Concatenating all these permutations we get

which represents G′. Relabeling the vertices in w′ with their original labels we get

3.2 Correctness of the algorithm

In the following theorem we establish the correctness of the relabeling algorithm.

Conversely, suppose ¯¯¯¯¯ab is not an edge in G′. We deal with this part in three cases, as the case b∈V1 and a∈V2 is symmetric to Case 2. In each case we identify two permutations produced by the algorithm: that one with the subword ab and the other with the subword ba.

Hence, a and b do not alternate in w′. This completes the proof.

Since Rp(Hn,n)=n (for n≥2), the upper bound obtained in Corollary 1 is tight for the permutation representation number of the class of bipartite graphs.

The dimension of a poset corresponding to a bipartite graph is bounded above by m.

Considering the possibility of occurrence of the empty word ε in Step 6(b) of the relabeling algorithm, the upper bound given in Corollary 1 can be improved for a special type of bipartite graphs as per the following corollary.

Let {ai1,…,aik}⊆V1 be the set of vertices each of which is adjacent to all vertices of V2 in a bipartite graph G, then Rp(G)≤m−k+1.

In this paper, we obtained a word w that is a concatenation of permutations of the vertices of a given bipartite graph G through a polynomial time algorithm such that w represent G. Accordingly, we obtain a tight upper bound for the permutation representation number of bipartite graphs and hence an upper bound for the representation number of bipartite graphs. We believe that the relabeling algorithm introduced in this paper has a scope to extend to a larger class of comparability graphs.

We are thankful to the referees for their comments which improved the presentation of the paper. The first author is thankful to the Council of Scientific and Industrial Research (CSIR), Government of India, for awarding the research fellowship for pursuing Ph.D. at IIT Guwahati.