On the Rényi Cross-Entropy

The Rényi cross-entropy measure between two distributions, a generalization of the Shannon cross-entropy, was recently used as a loss function for the improved design of deep learning generative adversarial networks. In this work, we examine the properties of this measure and derive closed-form expressions for it when one of the distributions is fixed and when both distributions belong to the exponential family. We also analytically determine a formula for the cross-entropy rate for stationary Gaussian processes and for finite-alphabet Markov sources. 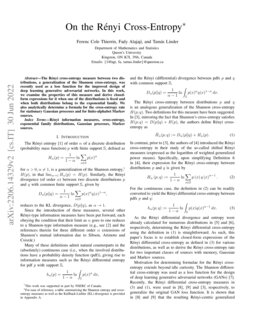 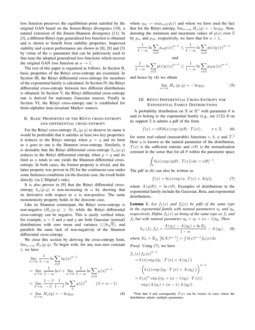 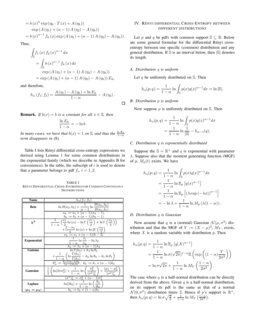 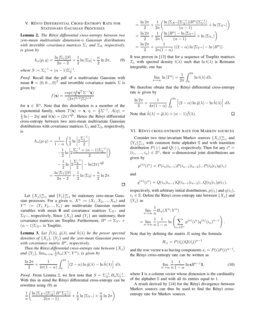 Rényi Cross-Entropy Measures for Common Distributions and Processes with Memory

In this paper, we propose to quantitatively compare loss functions based...
Thibaud Brochet, et al. ∙

The softmax function combined with a cross-entropy loss is a principled ...
Atish Agarwala, et al. ∙

for α>0,α≠1, is a generalization of the Shannon entropy,111For ease of reference, a table summarising the Shannon entropy and cross-entropy measures as well as the Kullback-Liebler (KL) divergence is provided in Appendix A. H(p), in that limα→1Hα(p)=H(p). Similarly, the Rényi divergence (of order α) between two discrete distributions p and q with common finite support S, given by

Many of these definitions admit natural counterparts in the (absolutely) continuous case (i.e., when the involved distributions have a probability density function (pdf)), giving rise to information measures such as the Rényi differential entropy for pdf

and the Rényi (differential) divergence between pdfs p and q with common support S,

In contrast, prior to [12], the authors of [15] introduced the Rényi cross-entropy in their study of the so-called shifted Rényi measures (expressed as the logarithm of weighted generalized power means). Specifically, upon simplifying Definition 6 in [15], their expression for the Rényi cross-entropy between distributions p and q is given by

For the continuous case, the definition in (2) can be readily converted to yield the Rényi differential cross-entropy between pdfs p and q:

It is also proven in [2] that the Rényi differential cross-entropy hα(p;q) is non-increasing in α by showing that its derivative with respect to α is non-positive. The same monotonicity property holds in the disrcrete case.

Like its Shannon counterpart, the Rényi cross-entropy is non-negative (Hα(p;q)≥0); while the Rényi differential cross-entropy can be negative. This is easily verified when, for example, α=2 and p and q

are both Gaussian (normal) distributions with zero mean and variance

1/(8√π), and parallels the same lack of non-negativity of the Shannon differential cross-entropy.

We close this section by deriving the cross-entropy limit, limα→∞Hα(p;q). To begin with, for any non-zero constant ~c, we have

where qM:=maxx∈Sq(x) and where we have used the fact that for the Rényi entropy, limα→∞Hα(q)=−lnqM. Now, denoting the minimum and maximum values of p(x) over S by pm and pM, respectively, we have that for α>1,

A probability distribution on

R or Rn with parameter θ is said to belong to the exponential family (e.g., see [3]) if on its support S it admits a pdf of the form

for some real-valued (measurable) functions c, b, η and T.222Note that θ and consequently T(x)

can be vectors in cases where the distribution admits multiple parameters.

Here η is known as the natural parameter of the distribution, T(x) is the sufficient statistic and c(θ) is the normalization constant in the sense that for all θ within the parameter space

The pdf in (6) can also be written as

Table I lists Rényi differential cross-entropy expressions we derived using Lemma 1 for some common distributions in the exponential family (which we describe in Appendix B for convenience). In the table, the subscript of i is used to denote that a parameter belongs to pdf fi, i=1,2.

Let p and q be pdfs with common support S⊆R. Below are some general formulae for the differential Rényi cross-entropy between one specific (common) distribution and any general distribution. If S is an interval below, then |S| denotes its length.

be uniformly distributed on

Now suppose p is uniformly distributed on S. Then

Suppose the S=R+ and q is exponential with parameter λ

. Suppose also that the moment generating function (MGF) of

is a random variable with distribution

The Rényi differential cross-entropy between two zero-mean multivariate dimension-nGaussian distributions with invertible covariance matrices Σ1 and Σ2, respectively, is given by

Recall that the pdf of a multivariate Gaussian with mean 0=(0,0...,0)T and invertible covariance matrix Σ is given by:

for x∈Rn. Note that this distribution is a member of the exponential family, where T(x)=x, η=12Σ−1, A(η)=12ln|−2η| and b(x)=(2π)−n2. Hence the Rényi differential cross-entropy between two zero-mean multivariate Gaussian distributions with covariance matrices Σ1 and Σ2, respectively, is

Let {Xj}∞j=1 and {Yj}∞j=1 be stationary zero-mean Gaussian processes. For a given n, Xn:=(X1,X2,...,Xn) and Yn:=(Y1,Y2,...,Yn) are multivariate Gaussian random variables with mean 0 and covariance matrices ΣXn and ΣYn, respectively. Since {Xj} and {Yj} are stationary, their covariance matrices are Toeplitz. Furthermore, Bn:=ΣYn+(α−1)ΣXn is Toeplitz.

Let ~f(λ), ~g(λ) and ~h(λ) be the power spectral densities of {Xj}, {Yj} and the zero-mean Gaussian process with covariance matrix Bn, respectively.

Then the Rényi differential cross-entropy rate between {Xj} and {Yj}, limn→∞1nhα(Xn;Yn), is given by

From Lemma 2, we first note that S=Σ−1XnBnΣ−1Yn. With this in mind the Rényi differential cross-entropy can be rewritten using (9) as

It was proven in [7] that for a sequence of Toeplitz matrices Tn with spectral density t(λ) such that lnt(λ) is Reimann integrable, one has

Consider two time-invariant Markov sources {Xj}∞j=1 and {Yj}∞j=1 with common finite alphabet S and with transition distribution P(⋅|⋅) and Q(⋅|⋅), respectively. Then for any in=(i1,…,in)∈Sn, their n

-dimensional joint distributions are given by

respectively, with arbitrary initial distributions, p(i1) and q(i1), i1∈S. Define the Rényi cross-entropy rate between {Xj} and {Yj} as

Note that by defining the matrix R using the formula

and the row vector s as having components si=P(i)P(i)α−1, the Rényi cross-entropy rate can be written as

where 1 is a column vector whose dimension is the cardinatliy of the alphabet S and with all its entries equal to 1.

Let P, Q, s and R be defined as above. If R is irreducible, then

is the largest positive eigenvalue of

Since the non-negative matrix R is irreducible, by the Frobenius theorem (e.g., cf. [13, 4]), it has a largest positive eigenvalue λ

b. Let bm and bM be the minimum and maximum elements, respectively, of b. Then due to the non-negativity of s,

where ⋅ denotes the Euclidean inner product. Similarly, λn−1s⋅b≥sRn−11bm. As a result,

Note that for all n, s⋅bbM is a constant. Thus

Another technique can be borrowed from [10] to generalize Lemma 4 to the case where R is reducible. First R is rewritten in the canonical form detailed in Proposition 1 of [10]. Let λk be the largest positive eigenvalue of each self-communicating sub-matrix of R. For each inessential class Ci let λj be the largest positive eigenvalue of each class that is reachable from Ci. Define λ=max{λk,λj}. Then (11) holds.

Appendix B: Distributions listed in Table I