We derive a lower and upper bound on the reliability function of discrete memoryless multiple-access channel (MAC) with noiseless feedback and variable-length codes (VLCs). The bounds are similar to the one for point-to-point channels, increasing linearly with respect to an appropriate distance between the rate pair and the capacity boundary. For the lower bound on the error exponent, we adapt Yamamoto and Itoh's coding scheme consisting of a data and a confirmation stage. In the data stage we use arbitrary feedback capacity-achieving codes. In the confirmation stage, each transmitter sends one bit of information to the receiver using a pair of codebooks of size two, one for each transmitter. The codewords at this stage are selected randomly according to an appropriately optimized joint probability distribution. For the upper bound on the error exponent, we adopt the proof techniques of Burnashev for the reliability function of the point-to-point case. The upper bound is derived by studying the rate of decrease of appropriate message entropies. 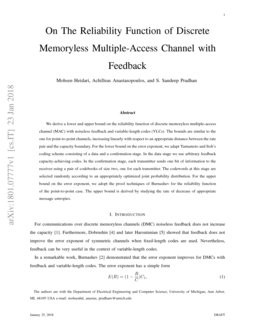 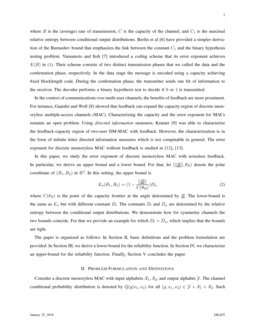 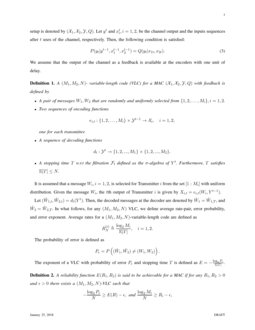 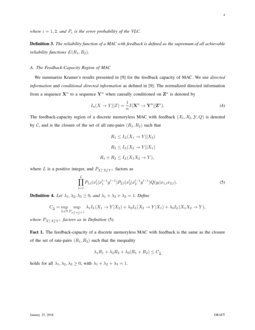 Noiseless feedback does not increase the capacity for communications over discrete memoryless channels (DMC) [1]. Furthermore, Dobrushin [4] and later Haroutunian [5] showed that feedback does not improve the error exponent of symmetric channels when fixed-length codes are used. Nevertheless, feedback can be very useful in the context of variable-length codes.

where R is the (average) rate of transmission, C is the capacity of the channel, and C1 is the maximal relative entropy between conditional output distributions. Berlin et al [6] have provided a simpler derivation of the Burnashev bound that emphasizes the link between the constant C1 and the binary hypothesis testing problem. Yamamoto and Itoh [7] introduced a coding scheme that its error exponent achieves E(R) in (1). Their scheme consists of two distinct transmission phases that we called the data and the confirmation phase, respectively. In the data stage the message is encoded using a capacity achieving fixed blocklength code. During the confirmation phase, the transmitter sends one bit of information to the receiver. The decoder performs a binary hypothesis test to decide if 0 or 1 is transmitted.

In the context of communications over multi-user channels, the benefits of feedback are more prominent. For instance, Gaarder and Wolf [8] showed that feedback can expand the capacity region of discrete memoryless multiple-access channels (MAC). Willems [9] derived the feedback-capacity region for a class of MACs. Characterizing the capacity region and the error exponent for general MACs remains an open problem. Using directed information measures, Kramer [10] was able to characterize the feedback-capacity region of two-user MAC with feedback. However, the characterization is in the form of infinite letter directed information measures which is not computable in general. The error exponent for discrete memoryless MAC without feedback is studied in [13, 14].

In this paper, we study the error exponent of discrete memoryless MAC with noiseless feedback. In particular, we derive an upper-bound and a lower-bound. For that, let (||R––||,θR) denote the polar coordinate of (R1,R2) in R2. In this setting, the upper-bound is

where C(θR) is the point of the capacity frontier at the angle determined by R––. The lower-bound is the same as Eu but with different constant Dl. The constants Dl and Du are determined by the relative entropy between the conditional output distributions. We show that for a class of MACs the two bounds coincide.

. The channel conditional probability distribution is denoted by

We assume that the output of the channel as a feedback is available at the encoders with one unit of delay.

The probability of error is defined as

The error exponent of a VLC with probability of error Pe and stopping time T is defined as E≜−log2PeE[T].

where i=1,2, and Pe is the error probability of the VLC.

Ii-a The Feedback-Capacity Region of MAC

The feedback-capacity region of a discrete memoryless MAC with feedback (X1,X2,Y,Q) is denoted by C, and is the closure of the set of all rate-pairs (R1,R2) such that

where L is a positive integer, and PXL1XL2YL factors as

The feedback-capacity of a discrete memoryless MAC with feedback is the same as the closure of the set of rate-pairs (R1,R2) such that the inequality

The Kullback–Leibler divergence for the MAC with transition probability matrix

Q is defined as

Iii A Lower-Bound for the Reliability Function

For the first stage, we use any coding scheme that achieves the feedback-capacity of the MAC. The length of this coding scheme is at most n(1−γ). Let ^W1,^W2

denote the decoder’s estimation of the messages at the end of the first stage. Define the following random variables:

Because of the feedback, ^W1 and ^W2 are known at each transmitter. Therefore, at the end of the first stage, transmitter i has access to Wi,^W1,^W2, and Hi, where i=1,2.

Upon receiving the channel output, the receiver estimates H1,H2. Denote this estimation by ^H1,^H2. If (^H1,^H2)=(0,0), then the hypothesis ^Θ=Θ0 is declared. Otherwise, ^Θ=Θ1 is declared. Because of the feedback, ^Θ is also available at each encoders. If ^Θ=Θ0, then transmission stops and a new data packet is transmitted at the next block. Otherwise, the message is transmitted again at the next block. The process continues until ^Θ=Θ0 occurs.

The confirmation stage in the proposed scheme can be viewed as a decentralized binary hypothesis problem in which a binary hypothesis {Θ0,Θ1} is observed partially by two distributed agents and the objective is to convey the true hypothesis to a central receiver. This problem is qualitatively different from the sequential binary hypothesis testing problem as identified in [6] for ptp channel. Note also that in the confirmation stage we use a different coding strategy than the one used in Yamamoto-Itoh scheme [7]. Here, all four codewords have a joint-type Pn. It can be shown that repetition codes, and more generally, constant composition codes are strictly suboptimal in this problem.

The following is a lower-bound for the reliability function of any discrete memoryless MAC:

and the supremum is taken over all probability distributions PX1X2Z1Z2 defined over X1×X2×X1×X2.

The proof is given in Appendix A. ∎

Iv An Upper-bound for the Reliability Function

In this part of the paper, we establish an upper-bound for the reliability function of any discrete memoryless MAC. Define

For any (N,M1,M2) VLC with probability of error Pe, and any ϵ>0, there exists a function δ such that the following is an upper-bound for the reliability function of the VLC

where (R1,R2) is the rate pair of the VLC and δ satisfies

From Theorem 2, the following is an upper-bound for the error exponent of a MAC:

The proof is given in Appendix E. ∎

Iv-a Proof of the Upper-Bound

Consider any (N,M1,M2) VLC with probability of error Pe, and stopping time T. Suppose the message at Encoder 2, W2, is made available to all terminals. For the new setup, as W2 is available at the Decoder, the average probability of error is P1e≜P{^W1≠W1}. Note that Pe≥P1e. We refer to such setup as W2-assisted MAC. For a maximum a posteriori decoder, after n uses of the channel and assuming the realization Yn=yn and W2=w2, define

where δ>0 is a fixed real number. Also, let τ1≜min{T,Tδ1}. Note that τ1 is a stopping time w.r.t the filtration {FW2×Ft}t>0. The following lemma provides a lower-bound on the probability of error for such setup.

The probability of error, Pe, for a hypothesis testing over a W2-assisted MAC and variable length codes satisfies the following inequality

where {H,Hc} are the two hypothesizes and T is the stopping time of the variable length code.

For a given MAC with finite D3 the following holds

The above lemmas are extensions of Lemma 1 and Proposition 2 in [6] for MAC. The proofs follow from similar arguments and are omitted.

Given a MAC with D3<∞, and for any (N,M1,M2) VLC with probability of error Pe the following holds

Suppose the VLC is used for a W2-assisted MAC. As discussed before, Pe≥P1e. We modify the encoding and the decoding functions of the VLC used for the MAC. Let H1⊆M1 be a subset of the message set M1. The subset H1 is to be determined at time τ1. The new decoding function, at time T, decides whether the message belongs to H1. The new encoding functions are the same as the original one until the time τ1. Then, after τ1, the transmitters perform a VLC to resolve the binary hypothesis {W1∈H1} and {W1∉H1}. This hypothesis problem is performed from τ1 to T. With these modifications, the error probability of this binary hypothesis problem is a lower-bound on Pe. In what follows, we present a construction for H1. Then, we apply Lemma 1 to complete the proof.

Note that by the above construction, for each case, P(H1)∈[ζδ,1−ζδ]. Thus, from Lemma 1 and the argument above, the inequality

holds almost surely. Next, we take the expectation of the above expression. The lemma follows by the convexity of e−x and Jensen’s inequality.

Next, we apply the same argument for the case where W1 is available at all the terminals. For that define

and let τ2≜min{T,Tδ2}. By symmetry, Lemma 3 holds for this case and we obtain

Next, define the following stopping times:

Also, let τ3=min{T,Tδ3}. using a similar argument as in the above, we can show that

For that, after time τ3, we formulate a binary hypothesis problem in which the transmitters determine whether (W1,W2)∈H3 or not. Here, H3 is a subset which is constructed using a similar method as for H1 in the proof of Lemma 3. We further allow the transmitters to communicate with each other after τ3. The maximum of the right-hand sides of (13), (14) and (15) gives a lower-bound on Pe. The lower-bound depends on the expectation of the stopping times τi,i=1,2,3. In what follows, we provide a lower-bound on E[τi]. Define the following random processes.

Given a (M1,M2,N)-VLC, for any ϵ>0 there exist L and a probability distribution PXL1XL2YL that factors as in (5) such that the following inequalities hold almost surely for 1≤t≤N

The proof is provided in Appendix B. ∎

We need the following lemma to proceed. The lemma is a result of Lemma 4 in [2], and we omit its proof.

The following inequality holds for each i=1,2,3

We prove the lemma for the case i=1. The proof for i=2,3 follows from a similar argument. For i=1, we obtain

As a result of the above argument, the right-hand side of (17) does not exceed the following

From Fano’s inequality we obtain

The proof is complete from the above inequality. ∎

As a result of the above lemma and (16), the inequality E[τi]≥logMiIiL+ϵ−hb(δ)IiL+ϵ holds. Finally, combining this inequality with (13)-(15) completes the proof of the theorem.

Iv-B An Alternative Proof for the Upper-Bound

In this part of the paper, we provide a series of Lemmas that are used to prove the Theorem. Define the following random processes.

For an (M1,M2,N)-VLC with probability of error Pe the following inequality holds

The proof follows from Fano’s Lemma as in [2]. ∎

There exists ϵ>0 such that, if Hit≤ϵ, then

The proof is given in Appendix C. ∎

Suppose W2=m for some m∈[1:M2]. Given this event and using the same argument as in the proof of Theorem 1 in [2] we can show that Z(i)t|W2=m is a submartingale for all m. More precisely, the inequality

holds almost surely w.r.t FW1×FW2. Taking the expectation of the both sides in the above inequality gives

The Theorem follows from the above lemma, and the proof is given in Appendix D.

V The Shape of the Lower and Upper Bounds

In this Section, we point out a few remarks on Eu(R1,R2) and the lower-bound El(R1,R2) defined in Theorem 1. Furthermore, we provide an alternative representation for the bounds and show that the lower and upper-bounds match for a class of MACs.

We first compare the lower bound in (9) and the upper-bound in Corollary 1. For a given arbitrary rate pair (R1,R2) inside the feedback-capacity of a given MAC, consider a sequence of VLCs with rates (R1,R2) and with average probability of error approaching zero. Then, the following holds: