On the Rademacher Complexity of Linear Hypothesis Sets

Linear predictors form a rich class of hypotheses used in a variety of learning algorithms. We present a tight analysis of the empirical Rademacher complexity of the family of linear hypothesis classes with weight vectors bounded in ℓ_p-norm for any p ≥ 1. This provides a tight analysis of generalization using these hypothesis sets and helps derive sharp data-dependent learning guarantees. We give both upper and lower bounds on the Rademacher complexity of these families and show that our bounds improve upon or match existing bounds, which are known only for 1 ≤ p ≤ 2. 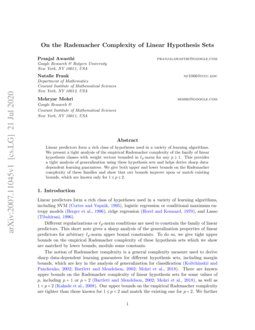 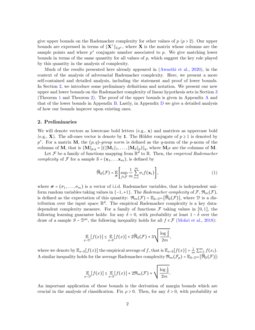 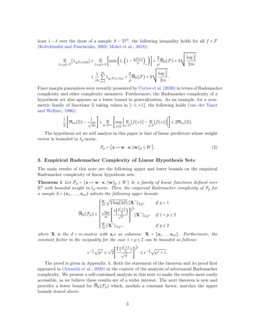 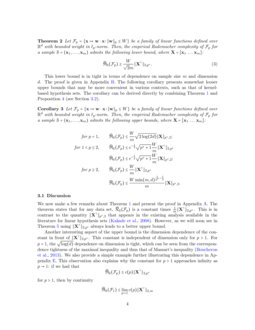 Linear predictors form a rich class of hypotheses used in a variety of learning algorithms, including SVM (Cortes and Vapnik, 1995)

Different regularizations or ℓp-norm conditions are used to constrain the family of linear predictors. This short note gives a sharp analysis of the generalization properties of linear predictors for arbitrary ℓp-norm upper bound constraints. To do so, we give tight upper bounds on the empirical Rademacher complexity of these hypothesis sets which we show are matched by lower bounds, modulo some constants.

Much of the results presented here already appeared in (Awasthi et al., 2020), in the context of the analysis of adversarial Rademacher complexity. Here, we present a more self-contained and detailed analysis, including the statement and proof of lower bounds. In Section 2, we introduce some preliminary definitions and notation. We present our new upper and lower bounds on the Rademacher complexity of linear hypothesis sets in Section 3 (Theorem 3 and Theorem 3). The proof of the upper bounds is given in Appendix A and that of the lower bounds in Appendix B. Lastly, in Appendix D we give a detailed analysis of how our bounds improve upon existing ones.

We will denote vectors as lowercase bold letters (e.g., x) and matrices as uppercase bold (e.g., X). The all-ones vector is denote by 1. The Hölder conjugate of p≥1 is denoted by p∗. For a matrix M, the (p,q)-group norm is defined as the q-norm of the p-norm of the columns of M, that is ∥M∥p,q=∥(∥M1∥1,…,∥Md∥p)∥q, where Mis are the columns of M.

Let F be a family of functions mapping from R to R. Then, the empirical Rademacher complexity of F for a sample S=(x1,…xm), is defined by

is a vector of i.i.d. Rademacher variables, that is independent uniform random variables taking values in

{−1,+1}. The Rademacher complexity of F, Rm(F), is defined as the expectation of this quantity: Rm(F)=ES∼Dm[ˆRS(F)], where D is a distribution over the input space R. The empirical Rademacher complexity is a key data-dependent complexity measure. For a family of functions F taking values in [0,1], the following learning guarantee holds: for any δ>0

, with probability at least

where we denote by Ex∼S[f(x)] the empirical average of f, that is Ex∼S[f(x)]=1m∑mi=1f(xi). A similar inequality holds for the average Rademacher complexity Rm(Fp)=ES∼Dm[ˆRS(F)]:

An important application of these bounds is the derivation of margin bounds which are crucial in the analysis of classification. Fix ρ>0. Then, for any δ>0, with probability at least 1−δ over the draw of a sample S∼Dm, the following inequality holds for all f∈F (Koltchinskii and Panchenko, 2002; Mohri et al., 2018):

Finer margin guarantees were recently presented by Cortes et al. (2020) in terms of Rademacher complexity and other complexity measures. Furthermore, the Rademacher complexity of a hypothesis set also appears as a lower bound in generalization. As an example, for a symmetric family of functions G taking values in [−1,+1], the following holds (van der Vaart and Wellner, 1996):

The hypothesis set we will analyze in this paper is that of linear predictors whose weight vector is bounded in ℓp-norm:

where X is the d×m-matrix with xis as columns: X=[x1…xm]. Furthermore, the constant factor in the inequality for the case 1<p≤2 can be bounded as follows:

The proof is given in Appendix A. Both the statement of the theorem and its proof first appeared in (Awasthi et al., 2020) in the context of the analysis of adversarial Rademacher complexity. We present a self-contained analysis in this note to make the results more easily accessible, as we believe these results are of a wider interest. The next theorem is new and provides a lower bound for ˆRS(Fp) which, modulo a constant factor, matches the upper bounds stated above.

[] Let Fp={x↦w⋅x:∥w∥p≤W} be a family of linear functions defined over R with bounded weight in ℓp-norm. Then, the empirical Rademacher complexity of Fp for a sample S=(x1,…,xm) admits the following lower bound, where X=[x1…xm]:

This lower bound is in tight in terms of dependence on sample size m and dimension d. The proof is given in Appendix B. The following corollary presents somewhat looser upper bounds that may be more convenient in various contexts, such as that of kernel-based hypothesis sets. The corollary can be derived directly by combining Theorem 3 and Proposition 1 (see Section 3.2).

Let Fp={x↦w⋅x:∥w∥p≤W} be a family of linear functions defined over R with bounded weight in ℓp-norm. Then, the empirical Rademacher complexity of Fp for a sample S=(x1,…,xm) admits the following upper bounds, where X=[x1…xm]:

We now make a few remarks about Theorem 3 and present the proof in Appendix A. The theorem states that for any data set, ˆRS(Fp) is a constant times 1m∥X⊤∥2,p∗. This is in contrast to the quantity ∥X⊤∥p∗,2 that appears in the existing analysis available in the literature for linear hypothesis sets (Kakade et al., 2008). However, as we will soon see in Theorem 2 using ∥X⊤∥2,p∗ always leads to a better upper bound.

Another interesting aspect of the upper bound is the dimension dependence of the constant in front of ∥X⊤∥2,p∗. This constant is independent of dimension only for p>1. For p=1, the √log(d) dependence on dimension is tight, which can be seen from the correspondence tightness of the maximal inequality and thus that of Massart’s inequality (Boucheron et al., 2013). We also provide a simple example further illustrating this dependence in Appendix E. This observation also explains why the constant for p>1 approaches infinity as p→1: if we had that

for p>1, then by continuity

We are not aware of any existing bound for the empirical Rademacher complexity of linear hypothesis sets for p>2 before this work. For other values of p, the best existing upper bounds were given by Kakade et al. (2008) for 1<p≤2 and by Bartlett and Mendelson (2001) (see also (Mohri et al., 2018)) for p=1:

Our new upper bound coincides with (4) when p=2 and is strictly tighter otherwise. Readers familiar with Rademacher complexity bounds for linear hypothesis sets will notice that our bound in this case depends on the norm ∥X⊤∥2,p∗. In contrast, the previously known bounds depend on ∥X∥p∗,2. In fact, one can show that the ∥X⊤∥2,p∗ is always smaller than ∥X∥p∗,2 for p∈(1,2], that is p∗≥2, as shown by the last inequality of (5) in the following proposition.

These bounds are tight. The proof is presented in Appendix C. To visualize the ratio between these two norms, we plot the two norms for various values of p∗ in figure 1.

Proposition 1 and the inequality c2(p)≤c1(p) imply the following result.

[] For p≤2, the following inequality holds:

Appendix A Proof of Theorem 3

In this section, we present the proof of Theorem 3.

The bound on the Rademacher complexity for p=1 was previously known but we reproduce the proof of this theorem for completeness. We closely follow the proof given in (Mohri et al., 2018). For any i∈[m], xij denotes the jth component of xi.

which concludes the proof.

Here again, we use the shorthand uσ=∑mi=1σixi. By definition of the dual norm, we can write:

Next, by Khintchine’s inequality (Haagerup, 1981), the following holds:

for p∈[2,+∞). This yields the following bound on the Rademacher complexity:

a.3 Bounding the Constant

We start with the upper bound. If we apply the right-hand side inequality of (7) to Γ(q+12) we get the following bound on f2(q):

It is easy to verify that,

We will establish that (e−12q(log2−1)√1+1q)≥1, which will complete the proof of the lower bound. We prove this statement by showing that

By applying some elementary inequalities

The last inequality follows since (log(2)−1−log(2)q) increases with q, and is positive at q=2.

Appendix B Proof of Theorem 3

In this section, we prove the lower bound of Theorem 3.

For any vector u, let |u| denote the vector derived from u by taking the absolute value of each of its components. Starting as in the proof of Theorem 3, using the dual norm property, we can write:

In this section, we prove Proposition 1. This result implies that for p∈(1,2), the group norm ∥X⊤∥2,p∗, is always a lower bound on the term ∥X∥p∗,2 that appears in existing upper bounds. We first present a simple lemma helpful for the proof.

We prove that, if p≥r∗, then the following equality holds:

and otherwise that the following holds:

Note that equality holds at the vector 1d1p1, and this implies that the inequality in the line above is an equality. Now for p≤r∗, ∥w∥p≥∥w∥∗r, implying that sup∥w∥p≤1∥w∥r∗≤1. Here, equality is achieved at a unit vector e1.

We now present the proof of Proposition 1.

However, now p and q are swapped in comparison to (6). Now after swapping them again, for p≤q,

The rest of this proof will be devoted to showing (5).

Next, if p=q, then ∥M∥q,p=∥M⊤∥p,q. For the rest of the proof, we will assume that q<p. Specifically, q<+∞ which allows us to consider fractions like pq.

We will use the shorthand r=pq>1. By definition of the group norm and using the notation Uij=|Mij|p, we can write

To show that this inequality is tight, note that equality holds for an all-ones matrix. Next, we prove the inequality

Both Theorem 3 and equation (4) present upper bounds on ˆRS(Fp) for 1<p≤2. Both of these bounds are of the form a constant times a matrix norm of X. In Appendix C, we compared the two matrix norms and proved the inequality ∥X⊤∥2,p∗≤∥X∥p∗,2 in the relevant region (Lemma C). Here, we compare the two constants and show that the constant associated with Theorem 3 is smaller than the one appearing in (4) (Lemma D). These lemmas combined directly prove Theorem 2.

In this section, we study the constants in the two known bounds on the Rademacher complexity of linear classes for 1<p≤2. Specifically,

The rest of this proof is devoted to showing that ddqf1(q)≥ddqf2(q). Upon differentiating we get that f′1(q)=12√q−1. Next, we will differentiate f2. To start, we state a useful inequality (see Equation 2.2 in Alzer (1997)) bounding the digamma function, ψ(x).

Recall that the digamma function is the logarithmic derivative of the gamma function, ψ(x)=ddx(logΓ(x))=Γ′(x)Γ(x). Now we differentiate lnf2:

Here, we provide an example showing that the dimension dependence of √log(d) in our upper bound on the Rademacher complexity of linear functions bounded in ℓ1 norm is tight.

Consider a data set with d=2m. Then the data matrix X has 2m rows. We pick the data {xi} so that the rows of X are the set {−1,+1}m. This means that ∥X⊤∥2,p∗=√m and we can compute the Rademacher complexity as