Artificial intelligence and medicine have a longstanding and proficuous relationship. In the present work we develop a brief assessment of this relationship with specific focus on machine learning, in which we highlight some critical points which may hinder the use of machine learning techniques for clinical diagnosis and therapy advice in practice. We then suggest a conceptual framework to build successful systems to aid clinical diagnosis and therapy advice, grounded on a novel concept we have coined drifting domains. We focus on oncology to build our arguments, as this area of medicine furnishes strong evidence for the critical points we take into account here. 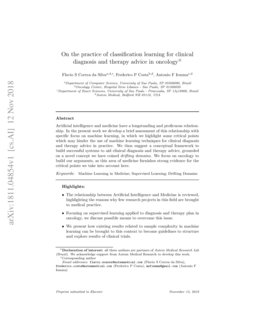 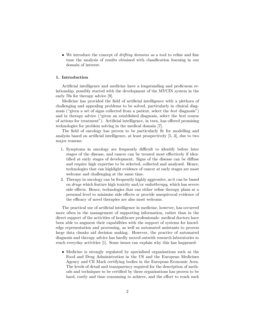 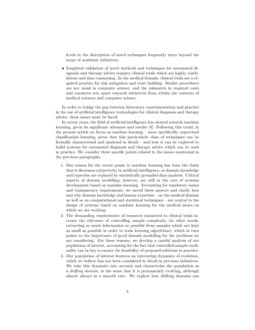 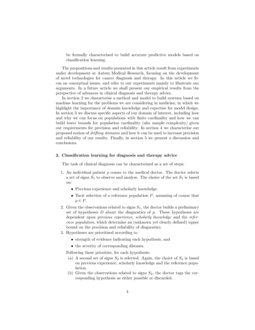 Artificial intelligence and medicine have a longstanding and proficuous relationship, possibly started with the development of the MYCIN system in the early 70s for therapy advice Shortliffe et al. (1973).

Medicine has provided the field of artificial intelligence with a plethora of challenging and appealing problems to be solved, particularly in clinical diagnosis (“given a set of signs collected from a patient, select the best diagnosis”) and in therapy advice (“given an established diagnosis, select the best course of actions for treatment”). Artificial intelligence, in turn, has offered promising technologies for problem solving in the medical domain (Peek et al., 2015).

The field of oncology has proven to be particularly fit for modelling and analysis based on artificial intelligence, at least prospectively (Kourou et al., 2015; Kaplan et al., 2018), due to two major reasons:

The practical use of artificial intelligence in medicine, however, has occurred more often in the management of supporting information, rather than in the direct support of the activities of healthcare professionals: medical doctors have been able to augment their capabilities with the support of systems for knowledge representation and processing, as well as automated assistants to process large data chunks aid decision making. However, the practice of automated diagnosis and therapy advice has hardly moved outwith research laboratories to reach everyday activities (Chen and Asch, 2017). Some issues can explain why this has happened:

In order to bridge the gap between laboratory experimentation and practice in the use of artificial intelligence technologies for clinical diagnosis and therapy advice, these issues must be faced.

In recent years, the field of artificial intelligence has steered towards machine learning, given its significant advances and results (Kononenko, 2001). Following this trend, in the present article we focus on machine learning – more specifically, supervised classification learning, given that this particularly class of techniques can be formally characterised and analysed in detail – and how it can be explored to build systems for automated diagnosis and therapy advice which can be used in practice. We consider three specific points related to the issues mentioned in the previous paragraphs:

The propositions and results presented in this article result from experiments under development at Autem Medical Research, focusing on the development of novel technologies for cancer diagnosis and therapy. In this article we focus on conceptual issues, and refer to our experiments mainly to illustrate our arguments. In a future article we shall present our empirical results from the perspective of advances in clinical diagnosis and therapy advice.

In section 2 we characterise a method and model to build systems based on machine learning for the problems we are considering in medicine, in which we highlight the importance of domain knowledge and expertise for model design. In section 3 we discuss specific aspects of our domain of interest, including how and why we can focus on populations with finite cardinality and how we can build lower bounds for population cardinality (aka sample complexity) given our requirements for precision and reliability. In section 4 we characterise our proposed notion of drifting domains and how it can be used to increase precision and reliability of our results. Finally, in section 5 we present a discussion and conclusions.

The task of clinical diagnosis can be characterised as a set of steps:

We have focused on the automation of steps 1 to 3 in clinical diagnoses as outlined in the previous paragraphs. These steps inherently depend upon expert knowledge, regardless of the computational techniques that can be employed for automation.

Required general steps to automate this procedure using supervised classification learning can be characterised as follows:

Similarly, the task of therapy advice can be characterised as a set of steps:

General steps to automate this procedure can be characterised as follows:

These limitations are imposed upon the best possible decision procedures for patients in the population P. Additionally,

Explicit account of these limitations and their reasons are useful to clarify that:

In the following sections we discuss in detail the lower bounds for the cardinality of samples ^P⊆P to estimate decision procedures, as well as the dynamics of the reference populations P.

The initial problem we consider, as characterised in the previous sections, is as follows: given a reference population P of patients featuring sufficiently high homogeneity with respect to the correlation between observable signs ∈S and corresponding diagnoses ∈D, we wish to determine a minimal cardinality N for oracles ^P of the form ^P={⟨→v1,di⟩,…,⟨→vN,dN⟩} such that for the indices 1,…N we have that p1,…pN∈P, each →vi is a tuple of values of signs ∈S corresponding to observations about patient pi, and di∈{⊤,⊥} is a confirmed diagnostics for patient pi with respect to a disease d∈D, in which ⊤ indicates confirmed disease and ⊥ indicates refuted disease.

We assume a high correlation between values of signs →vi and diagnostics di. We do not assume, however, that this correlation is perfect (which would correspond to a fully deterministic power, at least in a theoretical limit in which information about all patients in P is available, to diagnose disease di given observed values of signs →vi). The set {⟨→v1,d1⟩,…,⟨→v|P|,d|P|} of all pairs ⟨signs, diagnostics⟩∈P can, therefore, be partially inconsistent, amounting for an (unknown yet determined) upper bound on the precision of diagnoses as well as definition of therapy plans. This upper bound determines the best available classifiers. Our task is to build empirical classifiers based on oracles ^P which are provably sufficiently similar to the best available classifiers.

The theory of Probably Approximately Correct Learning (Valiant, 1984), as further extended to cope with partial inconsistencies (Haussler, 1992; Mohri et al., 2012), can provide us with lower bounds for the cardinality of →P as a function of:

The same lower bound applies for diagnosis and for therapy advice, if we use, for example,

As an example, assuming |→V|≈150, we will have ln|→V|≈5. This is a realistic assumption, considering the number of parameters and corresponding values which are usually considered by a medical doctor for the tasks under consideration here.

Employing this value, estimates can be obtained for |→P| given values for ϵ and δ as presented in Table 1.

As a concrete illustration, according to Table 1, if we wish to have a probability below 20% that a classifier will be built with disagreement above 10% with respect to the best available classifier, then we need to have access to a reference population with at least 100 patients.

These results bring existing methods and techniques to the context of clinical diagnosis and therapy advice, and provide medical doctors with concrete parameters and specifications to allow the development of systems based on classification learning for direct support of their activities. They are based, however, on an implicit assumption that any reference population and corresponding oracles for any disease under consideration are static. This assumption is not observed in practice:

For these reasons, it is reasonable to assume that the reference population undergoes small updates all the time. In order to take into account these updates, we introduce in the next section the concept of drifting domains and show how it can be employed to build more refined and precise estimates for clinical diagnosis and therapy advice.

Some implicit assumptions about our domain have been used in the previous sections:

We challenge the second assumption, given our previous consideration that our domain of interest undergoes permanent updates. We assume that these updates are gradual and smooth, as we believe that this assumption is realistic and it simplifies our analyses.

Given these assumptions, and considering that an undetermined time interval occurs between data is collected to build oracles, and that oracles are used for classification of patients, then one reasonable strategy to build more accurate oracles is to assume that, for each value of each sign collected from a patient, the actual present value of that sign can be a different value “around” the observed value.

), within two standard deviations below and above the observed value.

Given |S| as the cardinality of the set of signs, and given one specific observation about one patient belonging to an oracle, reasoning based on extremes of a surrounding interval for the value of each sign builds 2|S| alternative “versions” of that observation. Assuming that the cardinality of a sample is |^P|, we then have a collection of “possible worlds” W whose cardinality is defined as:

If we build one empirical classifier for each possible world, we can test the observations of a new patient with respect to |W| different classifiers. Two possibilities can occur:

In this article we have built considerations on how to close the gap between laboratory experimentation and medical practice on using classification learning for clinical diagnosis and therapy advice, with a specific focus on oncology.

More specifically, we have provided an explicit and detailed account of how systems for classification learning can be inserted into the activities workflow of a medical doctor to support diagnosis and therapy advice. Given that an important barrier to the application of machine learning techniques in medicine can be the requirements of large volumes of data, which can point to the necessity of building and running prohibitively costly clinical trials, we have also developed an analysis of sample complexity estimates to build oracles to train systems based on supervised learning, and suggested a pathway to build oracles based on clinical trials of viable dimensions. Finally, we have considered the dynamics of populations from which samples can be taken, and proposed a strategy to refine the analysis of classification results that take into account this dynamics, based on a proposed notion of drifting domains.

The considerations we have built here are based on actual experiments under development at Autem Medical Research, where we have worked on novel, lesser aggressive therapies for certain types of cancer and on novel, non-invasive, speedy and low cost technologies for early diagnosis of cancer. Following the guidelines presented here, we have been able to build classifiers to make diagnosis with error rates below 25% based on oracles such that |^P|≤90. These classifiers are, at present, undergoing scrutinous analysis and shall be described in a specific article in the near future.