On the Performance of Quickest Detection Spectrum Sensing: The Case of Cumulative Sum

Quickest change detection (QCD) is a fundamental problem in many applications. Given a sequence of measurements that exhibits two different distributions around a certain flipping point, the goal is to detect the change in distribution around the flipping point as quickly as possible. The QCD problem appears in many practical applications, e.g., quality control, power system line outage detection, spectrum reuse, and resource allocation and scheduling. In this paper, we focus on spectrum sensing as our application since it is a critical process for proper functionality of cognitive radio networks. Relying on the cumulative sum (CUSUM), we derive the probability of detection and the probability of false alarm of CUSUM based spectrum sensing. We show the correctness of our derivations using numerical simulations. 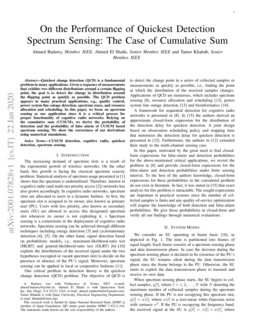 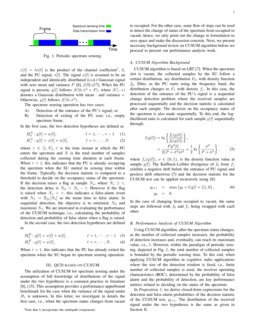 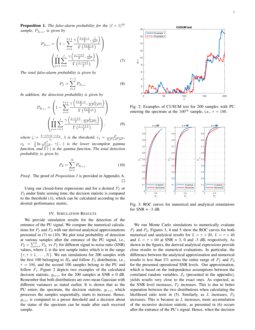 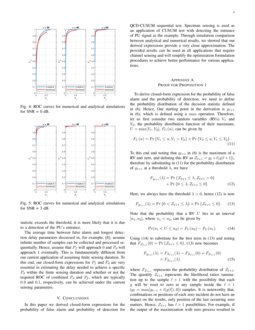 Spectrum Management for Cognitive Radio based on Genetics Algorithm

Spectrum scarceness is one of the major challenges that the present worl...
Santosh Kumar Singh, et al. ∙

The increasing demand of spectrum slots is a result of the exponential growth of wireless networks. On the other hand, this growth is facing the classical spectrum scarcity problem. Statistical analysis of spectrum usage presented in [Haykin] shows that the spectrum is underutilized. Therefore, interest in cognitive radio (and multi-tier priority access [kazi2019next]) networks has also grown accordingly. In cognitive radio networks, spectrum slots are allocated to users in a dynamic fashion. At first, the spectrum slot is assigned to its owner, also known as primary user (PU). Users with less priority, also known as secondary users (SU) are allowed to access this designated spectrum slot whenever its owner is not exploiting it. s Spectrum sensing is a cornerstone in the deployment of cognitive radio networks. Spectrum sensing can be achieved through different techniques including energy detection [8070358] and cyclostationary detection [8746083, 6951976]. On the other hand, signal detection based on probabilistic models, i.e., maximum-likelihood-ratio test (MLRT) and general-likelihood-ratio test (GLRT) [Kay, poorbook, Poor1, PoorJournal, 7565143] exploits the distributions of the received signal under the two hypotheses (occupied or vacant spectrum slot) to decide on the presence or absence of the PU’s signal. Moreover, spectrum sensing can be applied in local or cooperative fashions [7247243].

One critical problem in detection theory is the quickest change detection (QCD) problem. The objective of QCD is to detect the change point in a series of collected samples or measurements as quickly as possible, i.e., finding the point at which the distribution of the received samples changes. Applications of QCD are numerous, which includes spectrum sensing [Poor1], resource allocation and scheduling [ren2017quickest], power system line outage detection [7041234] and bioinformatics [muggeo2010efficient].

A framework for sequential detection for cognitive radio networks is presented in [Poor1]. In [7355347] the authors derived an approximate closed-form expression for the distribution of the detection delay for quickest detection. A joint design based on observation scheduling policy and stopping time that minimizes the detection delay for quickest detection is presented in [ren2017quickest]. Furthermore, the authors in [ren2017quickest] extended their study to the multi-channel sensing case.

is a zero-mean white Gaussian noise with variance

σ2. If the PU is occupying the frequency band, the received signal at the SU is y[ℓ]=x[ℓ]+w[ℓ], where x[ℓ]=hs[ℓ] is the product of the channel coefficient111Note that h incorporates the multipath components., h, and the PU signal, s[ℓ]. The signal x[ℓ] is assumed to be an independent and identically distributed (i.i.d.) Gaussian signal with zero mean and variance P [7355347, Ying-Chang08, LULU12, Poor1]. When the PU signal is present, y[ℓ] follows N(0,σ2+P), where N(⋅,∗)

denotes a Gaussian distribution with mean

Detection of the entrance of the PU’s signal; or

In the first case, the two detection hypotheses are defined as

where τ∈[1,N], τ is the time instant at which the PU enters the spectrum and N is the total number of samples collected during the sensing time duration at each frame. When τ=1, this indicates that the PU is already occupying the spectrum when the SU started its sensing time within the frame. Typically, the decision statistic is compared to a threshold to decide on the occupancy status of the spectrum. If the decision raises a flag at sample Ns, where Ns≥τ, the detection delay is Nd=Ns−τ. However if the flag is raised when Ns<τ, this indicates a false-alarm event with Nf=Ef0[Ns] as the mean time to false alarm. In sequential detection, the objective is to minimize Nd and maximize Nf. We are interested in evaluating the performance of the CUSUM technique, i.e., calculating the probability of detection and probability of false alarm when a flag is raised.

In the second case, the two detection hypotheses are defined as

When τ=1, this indicates that the PU has already exited the spectrum when the SU began its spectrum sensing operation.

Iii QCD based on CUSUM

The utilization of CUSUM for spectrum sensing under the assumption of full knowledge of distributions of the signal under the two hypotheses is a common practice in literature [Poor1, 7355347]. This assumption provides a performance upperbound benchmark for the case when the variance of the signal under H1 is unknown. In this letter, we investigate in details the first case, i.e., when the spectrum status changes from vacant to occupied. For the other case, same flow of steps can be used to detect the change of status of the spectrum from occupied to vacant; hence, we only point out the change in formulation to save space and make the discussion concrete. Next, we present necessary background review on CUSUM algorithm before we proceed to present our performance analysis work.

CUSUM algorithm is based on LRT [poorbook]. When the spectrum slot is vacant, the collected samples by the SU follow a certain distribution, say distribution F0, with density function f0. Ditto, as the PU starts using the frequency band, the distribution changes to F1 with density f1. In this case, the detection of the entrance of the PU’s signal is a sequential change detection problem where the received samples are processed sequentially and the decision statistic is calculated after each sample. The decision on the occupancy status of the spectrum is also made sequentially. To this end, the log-likelihood ratio is calculated for each sample y[ℓ] sequentially through:

. The Kullback-Leibler divergence of

f0 from f1 exhibits a negative drift before the entrance of PU signal and positive drift otherwise [poorbook] and the decision statistic for the CUSUM test can be applied recursively using [Poor1]:

In the case of changing from occupied to vacant, the same steps are followed with f0 and f1 being swapped with each other.

In Proposition 1, we derive closed-form expressions for the detection and false-alarm probabilities of the decision statistic of the CUSUM test, gℓ+1. The distribution of the received signal under the two hypotheses is the same as given in Section II.

The false-alarm probability for the (ℓ+1)th sample, Pfℓ+1, is given by

The total false-alarm probability is given by

In addition, the detection probability is given by

The proof of Proposition 1 is provided in Appendix A. ∎

Using our closed-form expressions and for a desired Pf or Pd under finite sensing time, the decision statistic is compared to the threshold (λ), which can be calculated according to the desired performance metric.

for different signal to noise ratio (SNR) values, where

L is the test sample index which is in the range {τ,τ+1,⋯,N}. We run simulations for 200 samples with the first 100 belonging to H0 and follow F0 distribution, i.e., τ=100, and the second 100 samples belong to the PU and follow F1. Figure 2 depicts two examples of the calculated decision statistic, gℓ+1, for the 200 samples at SNR = 0 dB. Remember that both distributions are zero mean Gaussian with different variances as stated earlier. It is shown that as the PU enters the spectrum, the decision statistic, gℓ+1, which processes the samples sequentially, starts to increase. Hence, gℓ+1 is compared to a preset threshold and a decision about the status of the spectrum can be made after each received sample.

We run Monte Carlo simulations to numerically evaluate Pf and Pd. Figures 3, 4 and 5 show the ROC curves for both numerical and analytical results for L=τ+20, L=τ+40 and L=τ+60 at SNR = 3, 0 and -3 dB, respectively. As shown in the figures, the derived analytical expressions provide close results to the numerical evaluations. In particular, the difference between the analytical approximation and numerical results is less than 5% across the entire range of Pf and Pd for the presented operational SNR levels.

Our approximation, which is based on the independence assumptions between the correlated random variables,

Zℓ (presented in the appendix), yields results very close to the exact ones. As expected, as the SNR level increases, Pd increases. This is due to better separation between the two distributions when calculating the likelihood ratio term in (5). Similarly, as L increases, Pd increases. This is because as L increases, more accumulation of the recursive decision statistic, as presented in (6) occurs after the entrance of the PU’s signal. Hence, when the decision statistic exceeds the threshold, it is more likely that it is due to a detection of the PU’s entrance.

The average time between false alarm and longest detection delay parameters discussed in, for example, [Poor1], assume infinite number of samples can be collected and processed sequentially. Hence, assume that Pf will approach 0 and Pd will approach 1 eventually. This is fundamentally different from our current application of assuming finite sensing duration. To this end, our closed-form expressions for Pf and Pd

Pd within the finite sensing duration and whether or not the required ROC of combined Pd and Pf, which are typically 0.9 and 0.1, respectively, can be achieved under the current sensing parameters.

In this paper we derived closed-form expressions for the probability of false alarm and probability of detection for QCD-CUSUM sequential test. Spectrum sensing is used as an application of CUSUM test with detecting the entrance of PU signal as the example. Through simulation comparison between analytical and numerical results, we showed that our derived expressions provide a very close approximation. The provided results can be used in all applications that require channel sensing and will simplify the optimization formulation procedures to achieve better performance for various applications.

Appendix A Proof for Proposition 1

6). Hence, Our starting point in the derivation is gℓ+1 in (6), which is defined using a max operation. Therefore, let us first consider two random variables (RVs) V1 and V2, the probability distribution function of their maximum, U=max[V1,V2], FU(u), can be given by

To this end and noting that gℓ+1 in (6) is the maximum of a RV and zero, and defining this RV as Zℓ+1=gℓ+l(y[ℓ+1]), therefore by substituting in (11) for the probability distribution of gℓ+1 at a threshold λ, we have

Note that the probability that a RV U lies in an interval [u1,u2], where u1<u2, can be given by

where FZℓ+1 represents the probability distribution of Zℓ+1. The quantity Zℓ+1 represents the likelihood ratios summation up to the sample ℓ+1 with the possibility that each g will be reset to zero at any sample inside the ℓ+1 (gℓ=max[gℓ−1+l(y[ℓ]),0]) samples. It is noteworthy that, combinations or positions of each zero incident do not have an impact on the results, only position of the last occurring zero matters. Hence, Zℓ+1 has ℓ+1 possibilities. For example, if the output of the maximization with zero process resulted in no zero, Zℓ+1=∑ℓ+1j=1l(y[j]). If a zero occurred at the first sample, Zℓ+1=∑ℓ+1j=2l(y[j]) and so on. We have

Note that the joint distribution of two independent random variables

Moreover, the distribution of the RV V=max[V1,V2,…,Vn], where V1 and V2 to Vn are independent RVs, is given by

The probability of detection for the (ℓ+1)th sample where ℓ∈[τ:N−1], is given by

It must be noted that Zℓ are correlated RVs, nevertheless, we assume independence as an approximation to make the closed-form expressions derivations feasible. Due to the recursive nature of Zℓ’s, deriving a closed-form expression with dependence assumption might be infeasible, as also stated in [7355347]. Nevertheless, we will show that the independence approximation provides very close results.