On the Performance of NOMA with Hybrid ARQ

In this paper, we investigate the outage performance of hybrid automatic repeat request with chase combining (HARQ-CC) assisted downlink non-orthogonal multiple access (NOMA) systems. A closed-form expression of the individual outage probability and the diversity gain are obtained firstly. Based on the developed analytical outage probability, a tradeoff between the minimum number of retransmissions and the transmit power allocation coefficient is then provided for a given target rate. The provided simulation results demonstrate the accuracy of the developed analytical results. Moreover, it is shown that NOMA combined with the HARQ-CC can achieve a significant advantage when only average channel state information is known at the transmitter. Particularly, the performance of the user with less transmit power in NOMA systems can be efficiently improved by utilizing HARQ-CC. 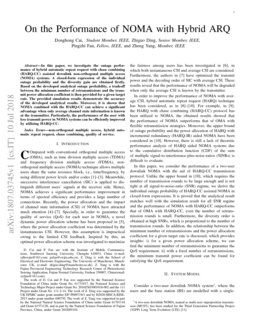 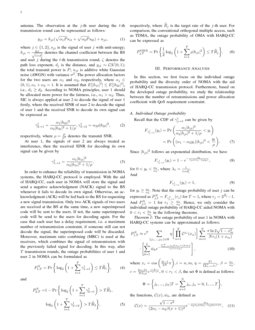 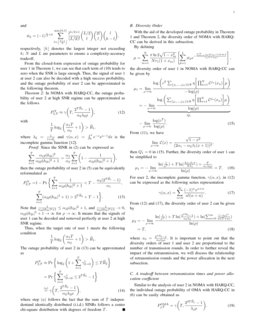 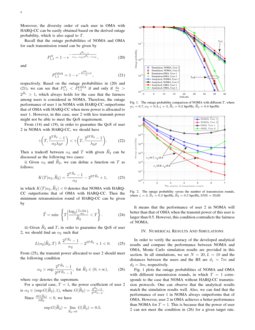 Compared with conventional orthogonal multiple access (OMA), such as time division multiple access (TDMA) and frequency division multiple access (FDMA), non-orthogonal multiple access (NOMA) technique allows multiple users share the same resource block, i.e., time/frequency, by using different power levels and/or codes[1, 2, 3]. Meanwhile, successive interference cancellation (SIC) is applied to distinguish different users’ signals at the receiver side. Hence, NOMA achieves a significant performance improvement in terms of spectral efficiency and provides a large number of connections. Recently, the power allocation and the impact of channel state information (CSI) of NOMA have attracted much attention [4, 5, 6, 7]. Specially, in order to guarantee the quality of service (QoS) for each user in NOMA, a novel dynamic power allocation scheme has been proposed in [5], where the power allocation coefficient was determined by the instantaneous CSI. However, this assumption is impractical owing to the limited CSI feedback. Inspired by this, an optimal power allocation scheme was investigated to maximize the fairness among users has been investigated in [6], in which both instantaneous CSI and average CSI are considered. Furthermore, the authors in [7] have optimized the transmit power and the decoding order of SIC with average CSI. These results reveal that the performance of NOMA will be degraded when only the average CSI is known by the transmitter.

In order to improve the performamce of NOMA with average CSI, hybrid automatic repeat request (HARQ) technique has been considered, as in [8, 9, 10]. For example, in [9], the HARQ with chase combining (HARQ-CC) protocol has been utilized to NOMA, the obtained results showed that the performance of NOMA outperforms that of OMA with flexible retransmission strategies. Moreover, the upper bound of outage probability and the power allocation of HARQ with incremental redundancy (HARQ-IR) aided NOMA have been considered in [10]

. However, there is still a lack of theoretic performance analysis of HARQ aided NOMA systems due to the cumulative distribution function (CDF) of the sum of multiple signal-to-interference-plus-noise-ratios (SINRs) is difficult to evaluate.

Consider a two-user downlink NOMA system111A two-user downlink NOMA, named as multi-user superposition transmission (MUST), has been studied for the Third Generation Partnership Project (3GPP) Long Term Evolution (LTE)[11]., where the users and the base station (BS) are modelled with a single-antenna. The observation at the j-th user during the t-th transmission round can be represented as follows:

where j∈{1,2},sjt is the signal of user j with unit-energy; hjt=gjt√1+dζj denotes the channel coefficient between the BS and user j during the t-th transmission round, ζ denotes the path loss exponent, dj is the distance, and gjt∼CN(0,1); the total transmit power is P; njt

σ2. The power allocation factors for the two users are α1 and α2, respectively, where αj∈(0,1),α1+α2=1. It is assumed that E[|h1t|2]≤E[|h2t|2], i.e., d1≥d2. According to NOMA principles, user 1 should be allocated more power for the fairness, i.e., α1>α2. Thus, SIC is always applied at user 2 to decode the signal of user 1 firstly, where the received SINR of user 2 to decode the signal of user 1 and the received SNR to decode its own signal can be expressed as

At user 1, the signals of user 2 are always treated as interference, then the received SINR for decoding its own signal can be given by

In order to enhance the reliability of transmission in NOMA systems, the HARQ-CC protocol is employed. With the aid of HARQ-CC, each user in NOMA will store the signal and send a negative acknowledgment (NACK) signal to the BS whenever it fails to decode its own signal. Otherwise, an acknowledgment (ACK) will be fed back to the BS for requesting a new signal transmission. Only two ACK signals of two users are received at the BS at the same time, a new superimposed code will be sent to the users. If not, the same superimposed code will be send to the users for decoding again. For the case that each user has a delay requirement, i.e. a maximum number of retransmission constraint, if someone still can not decode the signal, the superimposed code will be discarded. Moreover, maximum ratio combining (MRC) is used at the receivers, which combines the signal of retransmission with the previously failed signal for decoding. In this way, after T transmission rounds, the outage probabilities of user 1 and user 2 in NOMA can be formulated as

respectively, where ˆRj is the target rate of the j-th user. For comparison, the conventional orthogonal multiple access, such as TDMA, the outage probability of OMA with HARQ-CC can be expressed as

In this section, we first focus on the individual outage probability and the diversity order of NOMA with the aid of HARQ-CC transmission protocol. Furthermore, based on the developed outage probability, we study the relationship between the number of retransmissions and power allocation coefficient with QoS requirement constraint.

Recall that the CDF of γtj→1 can be given by

follows an exponential distribution, we have

The outage probability of user 1 in NOMA with HARQ-CC systems can be approximated as follows:

the functions, C(x),^wk, are defined as

respectively, ⌊k⌋ denotes the largest integer not exceeding k; N and L are parameters to ensure a complexity-accuracy tradeoff.

From the closed-form expression of outage probability for user 1 in Theorem 1, we can see that each term of (1) tends to zero when the SNR is large enough. Thus, the signal of user 1 at user 2 can also be decoded with a high success probability, and the outage probability of user 2 can be approximated in the following theorem.

In NOMA with HARQ-CC, the outage probability of user 2 at high SNR regime can be approximated as the follows

Since the SINR in (2) can be expressed as

Thus, when the target rate of user 1 meets the following condition

where step (a) follows the fact that the sum of T

With the aid of the developed outage probability in Theorem 1 and Theorem 2, the diversity order of NOMA with HARQ-CC can be derived in this subsection.

then Q1=0 in (III-B). Further, the diversity order of user 1 can be simplified to

For user 2, the incomplete gamma function, γ(α,x), in (12) can be expressed as the following series representation

where x0=2TˆR2−1α2λ2ρ. It is important to point out that the diversity orders of user 1 and user 2 are proportional to the number of transmission rounds. In order to further reveal the impact of the retransmission, we will discuss the relationship of retransmission rounds and the power allocation in the next subsection.

Iii-C A tradeoff between retransmission times and power allocation coefficient

Moreover, the diversity order of each user in OMA with HARQ-CC can be easily obtained based on the derived outage probability, which is also equal to T.

respectively. Based on the outage probabilities in (20) and (21), we can see that PN1,1<POMA1,1 if and only if α1α2>2ˆR1>1, which always holds for the case that the fairness among users is considered in NOMA. Therefore, the outage performance of user 1 in NOMA with HARQ-CC outperforms that of OMA with HARQ-CC when more power is allocated to user 1. However, in this case, user 2 with less transmit power might not be able to meet the QoS requirement.

Then a tradeoff between α2 and T with given ˆR2 can be discussed as the following two cases:

i) Given α2 and ˆR2, we can define a function on T as follows:

in which K(T|α2,ˆR2)<0 denotes that NOMA with HARQ-CC outperforms that of OMA with HARQ-CC. Then the minimum retransmission round of HARQ-CC can be given by

ii) Given ˆR2 and T, in order to guarantee the QoS of user 2, we should find an α2 such that

From (25), the transmit power allocated to user 2 should meet the following condition

where sup denotes the supremum.

It means that the performance of user 2 in NOMA will better than that of OMA when the transmit power of this user is larger than 0.5. However, this condition contradicts the fairness of NOMA.

In order to verify the accuracy of the developed analytical results and compare the performance between NOMA and OMA, Monte Carlo simulation results are provided in this section. In all simulations, we set N=20,L=10 and the distances between the users and the BS are d1=7m and d2=3m, respectively.

Fig. 1 plots the outage probabilities of NOMA and OMA with different transmission rounds, in which T=1 corresponds to the case that NOMA without HARQ-CC transmission protocols. One can observe that the analytical results match the simulation results well. Also, we can find that the performance of user 1 in NOMA always outperforms that of OMA. However, user 2 in OMA achieves a better performance than NOMA for T=1. This is because that the power of user 2 can not meet the condition in (26) for a given target rate. Moreover, it can be seen that the performance of NOMA can be improved by using HARQ-CC with flexible retransmission rounds.

In Fig. 3, the values of L(α2|ˆR2,T) are shown as a function of α2 with given transmission round and target rate, where L(α2|ˆR2,T)<0 denotes that the outage performance of NOMA outperforms that of OMA. Meanwhile, the minimum powers of user 2 are given in Table I for different transmission rounds, which guarantees the QoS requirement of this user. We can find that the power of user 2 decreases when the number of transmission rounds becomes large.

In this paper, the closed-form expression of individual outage probability for downlink NOMA combined with HARQ-CC transmission protocol has been derived. Furthermore, a tradeoff between the minimum transmission round and the power allocation scheme is discussed based on developed outage probability. The developed analytical results and simulations have shown the superior outage performance of NOMA in the present of HARQ-CC, which can be used to guide the design of systems with delay and reliability requirements.

Appendix A The Proof of Theorem 1

From (3), the SINR of user 1 in NOMA with HARQ-CC after T rounds, can be expressed as

where γt1→1≜yt. Because the SINRs of different transmission rounds are independent, by defining fY(y)≜f(y1,y2,...,yT), the joint PDF of Y can be given by

Applying Laplace transform to (28), we have

), the probability distribution function (PDF) of

yt can be expressed as

Then, the Laplace transform of Y in (A) can be equivalently reformulated as

By applying Gaussian-Chebyshev quadrature, (32) can be simplified as follows:

and N is a parameter to ensure a complexity-accuracy tradeoff.

Submitting (33) into (A), the Laplace transform of Y can be approximated as follows:

and the set Φ is defined as

By using the inverse Laplace transform of [L(s)]T in (A), the PDF of Y can be obtained

Therefore, the outage probability of user 1 can be approximated as

Substituting (37) into (A) completes the proof.