On the Parameterized Complexity of k-Edge Colouring

For every fixed integer k ≥ 1, we prove that k-Edge Colouring is fixed-parameter-tractable when parameterized by the number of vertices of maximum degree. 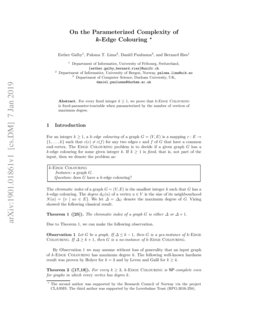 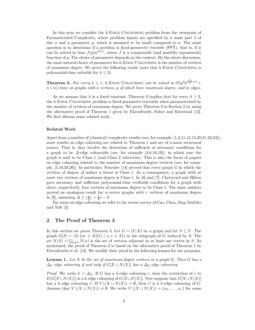 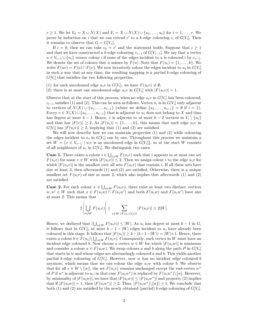 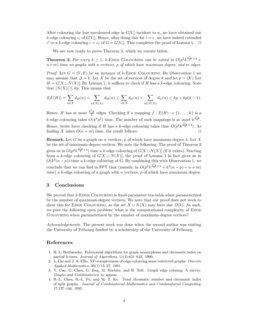 For an integer k≥1, a k-edge colouring of a graph G=(V,E) is a mapping c:E→{1,…,k} such that c(e)≠c(f) for any two edges e and f of G that have a common end-vertex. The Edge Colouring problem is to decide if a given graph G has a k-edge colouring for some given integer k. If k≥1 is fixed, that is, not part of the input, then we denote the problem as:

The chromatic index of a graph G=(V,E) is the smallest integer k such that G has a k-edge colouring. The degree dG(u) of a vertex u∈V is the size of its neighbourhood N(u)={v|uv∈E}. We let Δ=ΔG denote the maximum degree of G. Vizing showed the following classical result.

The chromatic index of a graph G is either Δ or Δ+1.

Due to Theorem 1.1, we can make the following observation.

By Observation 1 we may assume without loss of generality that an input graph of k-Edge Colouring has maximum degree k. The following well-known hardness result was proven by Holyer for k=3 and by Leven and Galil for k≥4.

For every k≥3, k-Edge Colouring is NP-complete even for graphs in which every vertex has degree k.

In this note we consider the k-Edge Colouring problem from the viewpoint of Parameterized Complexity, where problem inputs are specified by a main part I of size n and a parameter p, which is assumed to be small compared to n. The main question is to determine if a problem is fixed-parameter tractabe (FPT), that is, if it can be solved in time f(p)nO(1), where f is a computable (and possibly exponential) function of p. The choice of parameter depends on the context. By the above discussion, the most natural choice of parameter for k-Edge Colouring is the number of vertices of maximum degree. We prove the following result (note that k-Edge Colouring is polynomial-time solvable for k≤2).

As we assume that k is a fixed constant, Theorem 1.3 implies that for every k≥3, the k-Edge Colouring problem is fixed-parameter tractable when parameterized by the number of vertices of maximum degree. We prove Theorem 1.3 in Section 2 by using the alternative proof of Theorem 1.1 given by Ehrenfeucht, Faber and Kierstead [13]. We first discuss some related work.

Apart from a number of (classical) complexity results (e.g. [1, 2, 11, 12, 15, 21, 22, 23, 26]), most results on edge colouring are related to Theorem 1.1 and are of a more structural nature. That is, they involve the derivation of sufficient or necessary conditions for a graph to be Δ-edge colourable (see, for example [4, 8, 16, 19]), in which case the graph is said to be Class 1 (and Class 2 otherwise). This is also the focus of papers on edge colouring related to the number of maximum-degree vertices (see, for example, [5, 10, 25, 28]). In particular, Fournier [14] proved that every graph G in which the vertices of degree Δ induce a forest is Class 1. As a consequence, a graph with at most two vertices of maximum degree is Class 1. In [6] and [7], Chetwynd and Hilton gave necessary and sufficient polynomial-time verifiable conditions for a graph with three, respectively, four vertices of maximum degree to be Class 1. The same authors proved an analogous result for n-vertex graphs with r vertices of maximum degree in [9], assuming Δ≥⌊n2⌋+72r−3.

For more on edge colouring we refer to the recent survey of Cao, Chen, Jing, Stiebitz and Toft [3].

Thus suppose that i≥1 and suppose that we already have a k-edge colouring ci−1 of G[Vi−1] (note that at the start of the procedure, when i=1, this is indeed the case, as we have c0). We say that a vertex u∈Vi−1∪{ui} misses colour ℓ if none of the edges incident to u is coloured ℓ by ci−1. We denote the set of colours that u misses by F(u). Note that F(ui)={1,…,k}. We write F(uv)=F(u)∩F(v). We now iteratively colour the edges incident to ui in G[Vi] in such a way that at any time, the resulting mapping is a partial k-edge colouring of G[Vi] that satisfies the two following properties:

We will now describe how we can maintain properties (1) and (2) while colouring the edges incident to ui in G[Vi] one by one. Throughout this process we maintain a set W={v∈Vi−1 | uiv is an uncoloured edge in G[Vi]}, so at the start W consists of all neighbours of ui in G[Vi]. We distinguish two cases.

Case 1. There exists a colour ℓ∈⋃v∈WF(uiv) such that ℓ appears in at most one set F(uiv) for some v∈W with |F(uiv)|≤2. Then we assign colour ℓ to the edge uiv for which |F(uiv)| is the smallest over all sets F(uiv) that contain ℓ. If all these sets have size at least 3, then afterwards (1) and (2) are satisfied. Otherwise, there is a unique smallest set F(uiv) of size at most 2, which also implies that afterwards (1) and (2) are satisfied.

Case 2. For each colour x∈⋃v∈WF(uiv), there exists at least two distinct vertices w,w′∈W such that x∈F(uiw)∩F(uiw′) and both F(uiw) and F(uiw′) have size at most 2. This means that

Hence, we deduce that |⋃v∈WF(uiv)|≤|W|. As ui has degree at most k−1 in G, it follows that in G[Vi], at most k−1−|W| edges incident to ui have already been coloured in this stage. It follows that |F(ui)|≥k−(k−1−|W|)=|W|+1. Hence, there exists a colour b∈F(ui)∖⋃v∈WF(uiv). Consequently, each vertex in W must have an incident edge coloured b. Now choose a vertex w∈W for which |F(uiw)| is minimum and consider a colour a∈F(uiw). We swap colours a and b along the path P in G[Vi] that starts in w and whose edges are alternatingly coloured a and b. This yields another partial k-edge colouring of G[Vi]. However, now w has no incident edge coloured b anymore, which means that we can colour the edge uiw with colour b. We observe that for all v∈W∖{w}, the set F(uiv) remains unchanged except the end-vertex w∗ of P if w∗ is adjacent to ui; in that case F(uiw∗) is replaced by F(uiw∗)∖{a}. However, by minimality of |F(uiw)|, we have that |F(uiw)|≤|F(uiw∗)| and property (2) implies that if |F(uiw)|=1, then |F(uiw∗)|≥2. Thus, |F(uiw∗)∖{a}|≥1. We conclude that both (1) and (2) are satisfied by the newly obtained (partial) k-edge colouring of G[Vi].

Finally note that since q≥p, the algorithm has at most n−p extension steps and as each takes O(k2) time, the total running time is O(k2(n−p)). This completes the proof of Lemma 1. ∎

We are now ready to prove Theorem 1.3, which we restate below.

Let G=(V,E) be an instance of k-Edge Colouring. We first compute the maximum degree Δ of G and the corresponding set X of vertices of degree Δ in O(n+m) time (so p=|X|). Let H=G[X∪N(X)] denote the semi-core of G. By Theorem 2.1, it suffices to check if H has a k-edge colouring. Note that we may assume Δ≤k by Observation 1, hence |N(X)|≤Δp≤kp. This means that

Acknowledgements. We thank Leandro Zatesko for bringing paper [20] to our attention.