Chen and Lio (Computational Statistics and Data Analysis 54: 1581-1591, 2010) proposed five methods for estimating the parameters of generalized exponential distribution under progressive type-I interval censoring scheme. Unfortunately, among them, the proposed EM algorithm is incorrect. Here, we propose the correct EM algorithm and compare its performance with the maximum likelihood estimators and that proposed by Chen and Lio (2010) in a simulation study. 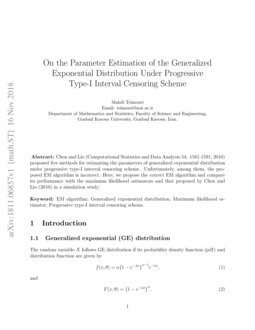 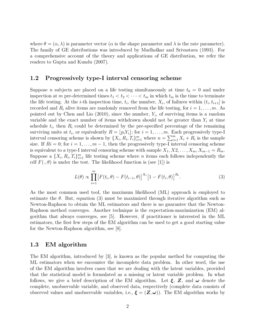 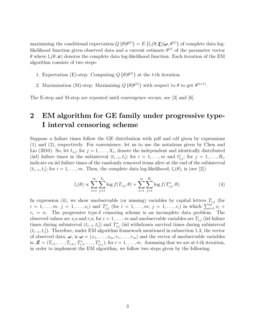 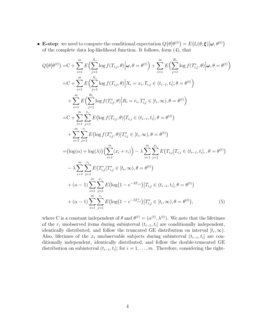 α is the shape parameter and λ is the rate parameter). The family of GE distributions was introduced by Mudholkar and Srivastava (1993). For a comprehensive account of the theory and applications of GE distribution, we refer the readers to Gupta and Kundu (2007).

Suppose n subjects are placed on a life testing simultaneously at time t0=0 and under inspection at m pre-determined times t1<t2<⋯<tm in which tm is the time to terminate the life testing. At the i-th inspection time, ti, the number, Xi, of failures within (ti,ti+1] is recorded and Ri alive items are randomly removed from the life testing, for i=1,…,m. As pointed out by Chen and Lio (2010), since the number, Yi, of surviving items is a random variable and the exact number of items withdrawn should not be greater than Yi at time schedule ti, then Ri could be determined by the pre-specified percentage of the remaining surviving units at ti, or equivalently R=⌊piYi⌋; for i=1,…,m. Each progressively type-I interval censoring scheme is shown by {Xi,Ri,Ti}mi=1 where n=∑mi=1Xi+Ri is the sample size. If Ri=0; for i=1,…,m−1, then the progressively type-I interval censoring scheme is equivalent to a type-I interval censoring scheme with sample X1,X2,…,Xm,Xm−1=Rm. Suppose a {Xi,Ri,Ti}mi=1 life testing scheme where n items each follows independently the cdf F(.,θ) is under the test. The likelihood function is (see [1]) is

As the most common used tool, the maximum likelihood (ML) approach is employed to estimate the θ. But, equation (3

) must be maximized through iterative algorithm such as Newton-Raphson to obtain the ML estimators and there is no guarantee that the Newton-Raphson method converges. Another technique is the expectation-maximization (EM) algorithm that always converges, see

[5]. However, if practitioner is interested in the ML estimators, the first few steps of the EM algorithm can be used to get a good starting value for the Newton-Raphson algorithm, see [8].

The E-step and M-step are repeated until convergence occurs, see [3] and [6].

Suppose n failure times follow the GE distribution with pdf and cdf given by expressions (1) and (2), respectively. For convenience, let us to use the notations given by Chen and Lio (2010). So, let ti,j; for j=1,…,Xi, denote the independent and identically distributed (iid) failure times in the subinterval (ti−1,ti]; for i=1,…,m and t∗I,j; for j=1,…,Ri, indicate on iid failure times of the randomly removed items alive at the end of the subinterval (ti−1,ti]; for i=1,…,m. Then, the complete data log-likelihood, lc(θ), is (see [2])

In expression (4), we show unobservable (or missing) variables by capital letters Ti,j (for i=1,…,m, j=1,…,xi) and T∗i,j (for i=1,…,m; j=1,…,ri) in which ∑mi=1xi+ri=n. The progressive type-I censoring scheme is an incomplete data problem. The observed values are xis and ris; for i=1,…,m and unobservable variables are Ti,j (iid failure times during subinterval (ti−1,ti]) and T∗i,j (iid withdrawn survival times during subinterval (ti−1,ti]). Therefore, under EM algorithm framework mentioned in subsection 1.3, the vector of observed data, ω, is ω=(x1,…,xm,r1,…,rm) and the vector of unobservable variables is, Z=(Ti,1,…,Ti,xi,T∗i,1,…,T∗i,ri); for i=1,…,m. Assuming that we are at t-th iteration, in order to implement the EM algorithm, we follow two steps given by the following.

We mention that the EM algorithm proposed by Chen and Lio (2010) is incorrect since they took expectation form the complete data log-likelihood function after differentiating it with respect to parameters which in not usual in the EM framework. Using the starting values as θ(0)=(α(0),λ(0)) and repeating the E-step and M-step described as above the EM estimators are obtained. Compare the updated shape and rate parameters at t-th iteration given in (12) and (13) with those given by Chen and Lio (2010). It is known that the updated shape parameters are the same but there is a significant difference between updated rate parameter given here and that given in Chen and Lio (2010). Although, difference between rate parameters is theoretically significant, however we perform a simulation study in the next section to observe the differences visually.

Here, we perform a simulation study to compare the performance of three estimators including: EM algorithm, ML, and EM algorithm proposed by Chen and Lio (2010) for estimating the parameters of GE distribution when items lie under progressive type-I censoring scheme. For simulating a {Xi,Ri,Ti}mi=1 scheme we use the algorithm proposed by Chen and Lio (2010). We consider four scenarios as:

and p(4)=(0.25,0,0,0,0,0,0,0,1). Under each of above four scenarios, we simulate n=112 observations from GE distribution with shape parameter α=1.5 and rate parameter λ=0.06 and m=9 pre-specified inspection times including: t1=5.5, t2=10.5, t3=15.5, t4=20.5, t5=25.5, t6=30.5, t7=40.5, t8=50.5, and termination time is t9=60.5. These settings was used by Chen and Lio (2010). We run simulations for 1000 times when the ML method, proposed EM algorithm in this paper (called here EM), and proposed EM algorithm by Chen and Lio (2010) (called here EM-Chen) take part in the competition. We note that the starting values for implementing both of EM and EM-Chen algorithms are α(0)=1 and λ(0)=0.5. The stopping criterion for both algorithms is max{∣∣α(t+1)−α(t)∣∣,∣∣λ(t+1)−λ(t)∣∣}≤0.000001; for t=0,…,100. The time series plots of the estimators are displayed in Figures (1)-(2). The summary statistics including bias and mean of squared errors (MSE) of estimators are given in Table 1. Recall that the EM and EM-Chen algorithms give the same estimators for the shape parameter and hence time series plot of ^αEM−Chen disappeared in left-hand side subfigures of Figures (1)-(2). As it is seen from Table 1, proposed EM algorithm outperforms EM-Chen algorithm under the first, second, and fourth scenarios in terms of bias, and it outperforms the EM-Chen algorithm in all four scenarios in the sense of MSE. Also, the EM algorithm shows better performance than the ML approach under the first scenario in the sense of both bias and MSE criteria.