On the optimal rates of convergence of Gegenbauer projections 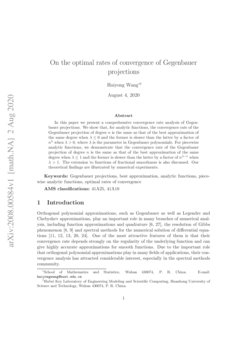 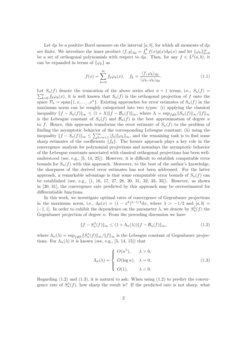 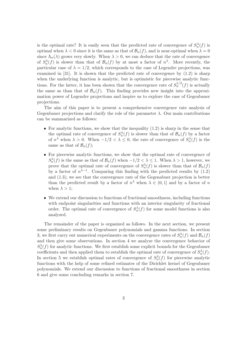 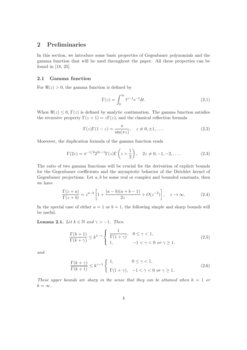 How fast does the best polynomial approximation converge than Legendre projection?

On the quadrature exactness in hyperinterpolation

This paper investigates the role of quadrature exactness in the approxim...
Congpei An, et al. ∙

Orthogonal polynomial approximations, such as Gegenbauer as well as Legendre and Chebyshev approximations, play an important role in many branches of numerical analysis, including function approximations and quadrature [6, 27], the resolution of Gibbs phenomenon [8, 9] and spectral methods for the numerical solution of differential equations [11, 12, 13, 20, 24]. One of the most attractive features of them is that their convergence rate depends strongly on the regularity of the underlying function and can give highly accurate approximations for smooth functions. Due to the important role that orthogonal polynomial approximations play in many fields of applications, their convergence analysis has attracted considerable interest, especially in the spectral methods community.

Let dμ be a positive Borel measure on the interval [a,b]

, for which all moments of

dμ are finite. We introduce the inner product ⟨f,g⟩dμ=∫baf(x)g(x)dμ(x) and let {φk}∞k=0 be a set of orthogonal polynomials with respect to dμ. Then, for any f∈L2(a,b), it can be expanded in terms of {φk} as

Let Sn(f) denote the truncation of the above series after n+1 terms, i.e., Sn(f)=∑nk=0fkφk(x), it is well known that Sn(f) is the orthogonal projection of f onto the space Pn=span{1,x,…,xn}

. Existing approaches for error estimates of

Sn(f) in the maximum norm can be roughly categorized into two types: (i) applying the classical inequality ∥f−Sn(f)∥∞≤(1+Λ)∥f−Bn(f)∥∞, where Λ=supf≢0∥Sn(f)∥∞/∥f∥∞ is the Lebesgue constant of Sn(f) and Bn(f) is the best approximation of degree n to f. Hence, this approach transforms the error estimate of Sn(f) to the problem of finding the asymptotic behavior of the corresponding Lebesgue constant; (ii) using the inequality ∥f−Sn(f)∥∞≤∑∞k=n+1|fk|∥φk∥∞, and the remaining task is to find some sharp estimates of the coefficients {fk}. The former approach plays a key role in the convergence analysis for polynomial projections and nowadays the asymptotic behavior of the Lebesgue constants associated with classical orthogonal projections has been well-understood (see, e.g., [5, 14, 25]). However, it is difficult to establish computable error bounds for Sn(f) with this approach. Moreover, to the best of the author’s knowledge, the sharpness of the derived error estimates has not been addressed. For the latter approach, a remarkable advantage is that some computable error bounds of Sn(f) can be established (see, e.g., [1, 16, 17, 27, 28, 30, 31, 32, 33, 35]). However, as shown in [30, 31], the convergence rate predicted by this approach may be overestimated for differentiable functions.

In this work, we investigate optimal rates of convergence of Gegenbauer projections in the maximum norm, i.e., dμ(x)=(1−x2)λ−1/2dx, where λ>−1/2 and [a,b]=[−1,1]. In order to exhibit the dependence on the parameter λ, we denote by Sλn(f) the Gegenbauer projection of degree n. From the preceding discussion we have

Regarding (1.2) and (1.3), it is natural to ask: When using (1.2) to predict the convergence rate of Sλn(f), how sharp the result is? If the predicted rate is not sharp, what is the optimal rate? It is easily seen that the predicted rate of convergence of Sλn(f) is optimal when λ<0 since it is the same as that of Bn(f), and is near-optimal when λ=0 since Λn(λ) grows very slowly. When λ>0, we can deduce that the rate of convergence of Sλn(f) is slower than that of Bn(f) by at most a factor of nλ. More recently, the particular case of λ=1/2, which corresponds to the case of Legendre projections, was examined in [31]. It is shown that the predicted rate of convergence by (1.2) is sharp when the underlying function is analytic, but is optimistic for piecewise analytic functions. For the latter, it has been shown that the convergence rate of S1/2n(f) is actually the same as than that of Bn(f). This finding provides new insight into the approximation power of Legendre projections and inspire us to explore the case of Gegenbauer projections.

The aim of this paper is to present a comprehensive convergence rate analysis of Gegenbauer projections and clarify the role of the parameter λ. Our main contributions can be summarized as follows:

The remainder of the paper is organized as follows. In the next section, we present some preliminary results on Gegenbauer polynomials and gamma functions. In section 3, we first carry out numerical experiments on the convergence rates of Sλn(f) and Bn(f) and then give some observations. In section 4 we analyze the convergence behavior of Sλn(f) for analytic functions. We first establish some explicit bounds for the Gegenbauer coefficients and then applied them to establish the optimal rate of convergence of Sλn(f). In section 5 we establish optimal rates of convergence of Sλn(f) for piecewise analytic functions with the help of some refined estimates of the Dirichlet kernel of Gegenbauer polynomials. We extend our discussion to functions of fractional smoothness in section 6 and give some concluding remarks in section 7.

In this section, we introduce some basic properties of Gegenbauer polynomials and the gamma function that will be used throughout the paper. All these properties can be found in [18, 25].

For R(z)>0, the gamma function is defined by

When R(z)≤0, Γ(z) is defined by analytic continuation. The gamma function satisfies the recursive property Γ(z+1)=zΓ(z), and the classical reflection formula

Moreover, the duplication formula of the gamma function reads

The ratio of two gamma functions will be crucial for the derivation of explicit bounds for the Gegenbauer coefficients and the asymptotic behavior of the Dirichlet kernel of Gegenbauer projections. Let a,b be some real or complex and bounded constants, then we have

In the special case of either a=1 or b=1, the following simple and sharp bounds will be useful.

These upper bounds are sharp in the sense that they can be attained when k=1 or k=∞.

In view of the recursive property of Γ(z), we obtain

Let n≥0 be an integer, the Gegenbauer (or ultraspherical) polynomial of degree n is defined by

where 2F1(⋅) is the Gauss hypergeometric function defined by

Since ωλ(x) is even, it follows that Cλn(x) satisfy the following symmetry relation

and an odd function for odd

where Cλ is a positive constant independent of n. The Rodrigues formula of Gegenbauer polynomials reads

which plays an important role in asymptotic analysis of the Gegenbauer coefficients.

Gegebauer polynomials include some important polynomials such as Legendre and Chebyshev polynomials as special cases. More specifically, we have

where Tn(x) is the Chebyshev polynomial of the first kind of degree n.

In this section we present some experimental observations on the convergence behavior of Gegenbauer projections. First, from the orthogonality (2.8) we have

In order to quantify the difference between the rates of convergence of Bn(f) and Sλn(f), we introduce the quantity

Throughout the rest of the paper, we may use Sλn(f,x) instead of Sλn(f) when computing Sλn(f) at the point x. In addition, we compute Bn(f) using the barycentric-Remez algorithm in [21] and its implementation is available in Chebfun with the minimax command (see [7]).

It is clear that the first function is analytic in the whole complex plane and the last two functions are analytic in a neighborhood of the interval [−1,1]. We divide the choice of the parameter λ into two ranges: λ∈(−1/2,0] and λ>0.

In summary, the above observations suggest the following conclusions:

We consider the following test functions

where (x)k+ is the truncated power function defined by

It is clear that these three functions are all piecewise analytic functions, whose definition will be given in section 5. In our numerical tests, we divide the choice of the parameter λ into ranges: λ∈(−1/2,1] and λ>1.

In summary, the above observations suggest the following conclusions:

4 Optimal rate of convergence of Gegenbauer projections for analytic functions

In this section we study the optimal rate of convergence of Gegenbauer projections for analytic functions. Let Eρ denote the Bernstein ellipse

The starting point of our analysis is the contour integral expression of the Gegenbauer coefficients.

Suppose that f is analytic in the region bounded by the ellipse Eρ for some ρ>1, then for each k≥0 and λ>−1/2 and λ≠0,

With a different normalization condition on {Cλk(x)}, (4.2) was first derived by Cantero and Iserles in [3] for developing some fast algorithms. The idea is to express aλk as a linear combination of {f(j)(0)} and then as an integral transform with a Gauss hypergeometric function as its kernel. Due to the slow convergence of the Taylor series of the kernel, a hypergeometric transformation was used to replace the original kernel with a new one that converges much more rapidly, which gives (4.2). An alternative and simpler approach for the derivation of (4.2) was proposed in [29] and the idea is to rearrange the Chebyshev coefficients of the second kind. We refer the interested readers to [3, 29] for more details. ∎

Under the assumptions of Lemma 4.1. Then, for λ≠0,

where Dλ(ρ) is defined by

The remaining task is to bound the constant ck,λ and these hypergeometric functions on the right hand side of (4.6). For the former, it is easy to see that |ck,λ|=1 when k=0. For k≥1, using Lemma 2.1 we obtain

With the above preparation, we now derive error estimates of Gegenbauer projections in the maximum norm. Compared to the results in [29, Thm. 4.8], our new results are more concise and informative. Throughout the paper, ⌊x⌋ denotes the integer part of x.

Suppose that f is analytic in the region bounded by the ellipse Eρ for some ρ>1.

Up to constant factors, these bounds on the right hand side are optimal in the sense that they can not be improved in any negative powers of n further.

Combining these bounds together with Theorem 4.2 gives

For the sum inside the bracket, note that kλ/ρk is strictly decreasing with respect to k for k≥λ/lnρ, we obtain that

We now turn to prove the optimality of (4.10) and (4.11). Here we only prove the former since the latter can be proved by a similar argument. Suppose by contradiction that there exist constants γ,c>0 independent of n such that

We consider the function f(x)=(x−ω)−1 with ω+√ω2−1>1+λ−1. It is easily seen that this function has a simple pole at x=ω and therefore ρ≤ω+√ω2−1−ϵ, where ϵ>0 may be taken arbitrary small. Using Lemma 4.1 and the residue theorem, we can write the Gegenbauer coefficients of f(x) as

Clearly, we see that aλk<0 for all k≥0. Moreover, by considering the ratio aλk+1/aλk, it is not difficult to verify that the sequence {aλk}∞k=0 is strictly increasing. We now consider the error of Sλn(f) at the point x=1. In view of (2.10), we obtain that

Combining this with (4.13) we deduce that

In this section we study optimal rate of convergence of Gegenbauer projections for piecewise analytic functions. Throughout this section, we denote by K a generic positive constant independent of n which may take different values at different places.

We first introduce the definition of piecewise analytic functions.

where Dλn(⋅,⋅) is the Dirichlet kernel of Gegenbauer projection defined by

and the last equation follows from the Christoffel-Darboux formula of Gegenbauer polynomials.

The following refined estimates for the Dirichlet kernel will be useful.