On the number of edges of separated multigraphs

We prove that the number of edges of a multigraph G with n vertices is at most O(n^2log n), provided that any two edges cross at most once, parallel edges are noncrossing, and the lens enclosed by every pair of parallel edges in G contains at least one vertex. As a consequence, we prove the following extension of the Crossing Lemma of Ajtai, Chvátal, Newborn, Szemerédi and Leighton, if G has e ≥ 4n edges, in any drawing of G with the above property, the number of crossings is Ω(e^3/n^2log(e/n)). This answers a question of Kaufmann et al. and is tight up to the logarithmic factor. 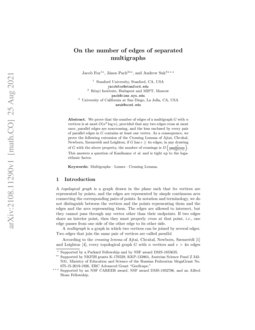 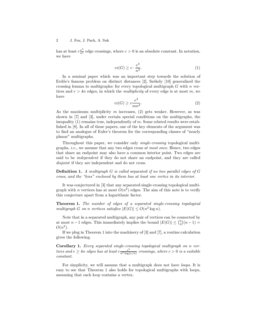 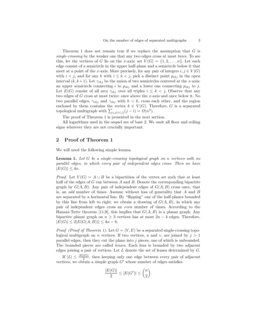 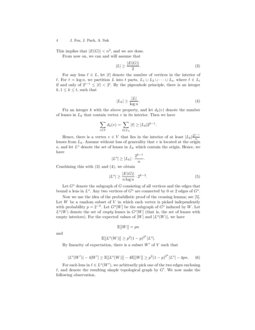 A topological graph is a graph drawn in the plane such that its vertices are represented by points, and the edges are represented by simple continuous arcs connecting the corresponding pairs of points. In notation and terminology, we do not distinguish between the vertices and the points representing them and the edges and the arcs representing them. The edges are allowed to intersect, but they cannot pass through any vertex other than their endpoints. If two edges share an interior point, then they must properly cross at that point, i.e., one edge passes from one side of the other edge to its other side.

A multigraph is a graph in which two vertices can be joined by several edges. Two edges that join the same pair of vertices are called parallel.

According to the crossing lemma of Ajtai, Chvátal, Newborn, Szemerédi [1] and Leighton [4], every topological graph G with n vertices and e>4n edges has at least ce3n2 edge crossings, where c>0 is an absolute constant. In notation, we have

In a seminal paper which was an important step towards the solution of Erdős’s famous problem on distinct distances [2], Székely [10] generalized the crossing lemma to multigraphs: for every topological multigraph G with n vertices and e>4n edges, in which the multiplicity of every edge is at most m, we have

As the maximum multiplicity m increases, (2) gets weaker. However, as was shown in [7] and [3], under certain special conditions on the multigraphs, the inequality (1) remains true, independently of m. Some related results were established in [8]. In all of these papers, one of the key elements of the argument was to find an analogue of Euler’s theorem for the corresponding classes of “nearly planar” multigraphs.

A multigraph G is called separated if no two parallel edges of G cross, and the “lens” enclosed by them has at least one vertex in its interior.

It was conjectured in [3] that any separated single-crossing topological multigraph with n vertices has at most O(n2) edges. The aim of this note is to verify this conjecture apart from a logarithmic factor.

The number of edges of a separated single-crossing topological multigraph G on n vertices satisfies |E(G)|≤O(n2logn).

Note that in a separated multigraph, any pair of vertices can be connected by at most n−1 edges. This immediately implies the bound |E(G)|≤(n2)(n−1)=O(n3).

If we plug in Theorem 1.1 into the machinery of [3] and [7], a routine calculation gives the following.

Every separated single-crossing topological multigraph on n vertices and e≥4n edges has at least ce3n2log(e/n) crossings, where c>0 is a suitable constant.

For simplicity, we will assume that a multigraph does not have loops. It is easy to see that Theorem 1 also holds for topological multigraphs with loops, assuming that each loop contains a vertex.

Theorem 1.1 does not remain true if we replace the assumption that G is single-crossing by the weaker one that any two edges cross at most twice. To see this, let the vertices of G lie on the x-axis: set V(G)={1,2,…,n}. Let each edge consist of a semicircle in the upper half-plane and a semicircle below it that meet at a point of the x-axis. More precisely, for any pair of integers i,j∈V(G) with i<j, and for any k with i≤k<j, pick a distinct point pikj in the open interval (k,k+1). Let γikj be the union of two semicircles centered at the x-axis: an upper semicircle connecting i to pikj and a lower one connecting pikj to j. Let E(G) consist of all arcs γikj over all triples i≤k<j. Observe that any two edges of G cross at most twice: once above the x-axis and once below it. No two parallel edges, γihj and γikj with h<k, cross each other, and the region enclosed by them contains the vertex k∈V(G). Therefore, G is a separated topological multigraph with ∑i,j(i<j)(j−i)=Ω(n3).

The proof of Theorem 1.1 is presented in the next section.

All logarithms used in the sequel are of base 2. We omit all floor and ceiling signs wherever they are not crucially important.

We will need the following simple lemma.

Let G be a single-crossing topological graph on n vertices with no parallel edges, in which every pair of independent edges cross. Then we have |E(G)|≤4n.

Let V(G)=A∪B be a bipartition of the vertex set such that at least half of the edges of G run between A and B. Denote the corresponding bipartite graph by G(A,B). Any pair of independent edges of G(A,B) cross once, that is, an odd number of times. Assume without loss of generality that A and B are separated by a horizontal line. By “flipping” one of the half-planes bounded by this line from left to right, we obtain a drawing of G(A,B), in which any pair of independent edges cross an even number of times. According to the Hanani-Tutte theorem [11, 9], this implies that G(A,B) is a planar graph. Any bipartite planar graph on n≥3 vertices has at most 2n−4 edges. Therefore, |E(G)|≤2|E(G(A,B))|≤4n−8.

Let G=(V,E) be a separated single-crossing topological multigraph on n vertices. If two vertices, u and v, are joined by j>1 parallel edges, then they cut the plane into j pieces, one of which is unbounded. The bounded pieces are called lenses. Each lens is bounded by two adjacent edges joining a pair of vertices. Let L denote the set of lenses determined by G.

If |L|≤|E(G)|2, then keeping only one edge between every pair of adjacent vertices, we obtain a simple graph G′ whose number of edges satisfies

From now on, we can and will assume that

For any lens ℓ∈L, let |ℓ| denote the number of vertices in the interior of ℓ. For t=logn, we partition L into t parts, L1∪L2∪⋯∪Lt, where ℓ∈Li if and only of 2i−1≤|ℓ|<2i. By the pigeonhole principle, there is an integer k,1≤k≤t, such that

Fix an integer k with the above property, and let dk(v) denote the number of lenses in Lk that contain vertex v in its interior. Then we have

Hence, there is a vertex v∈V that lies in the interior of at least |Lk|2k−1n lenses from Lk. Assume without loss of generality that v is located at the origin o, and let Lo denote the set of lenses in Lk which contain the origin. Hence, we have

Let Go denote the subgraph of G consisting of all vertices and the edges that bound a lens in Lo. Any two vertices of Go are connected by 0 or 2 edges of Go.

Now we use the idea of the probabilistic proof of the crossing lemma; see [5]. Let W be a random subset of V

in which each vertex is picked independently with probability

p=2−k. Let Go[W] be the subgraph of Go induced by W. Let Lo(W) denote the set of empty lenses in Go[W] (that is, the set of lenses with empty interiors). For the expected values of |W| and |Lo(W)|, we have

By linearity of expectation, there is a subset W′ of V such that

For each lens in ℓ∈Lo(W′), we arbitrarily pick one of the two edges enclosing ℓ, and denote the resulting simple topological graph by G′. We now make the following observation.

Any two independent edges of G′ cross each other.

Suppose, for contradiction, that G′ has two independent edges, e and e′, which do not cross. Let ℓ and ℓ′ be the corresponding empty lenses in Go[W′]. Since the interiors of ℓ and ℓ′ are empty, neither of them can contain an endpoint of the other. Both of these lenses contain the origin o, which implies that they cannot be disjoint. Therefore, both sides of ℓ must cross both sides of ℓ′, contradicting the choice of e and e′. Here, we used the assumption that G and, hence, G′ are single-crossing.

Comparing this with (5), we conclude that

This completes the proof of Theorem 1.1.