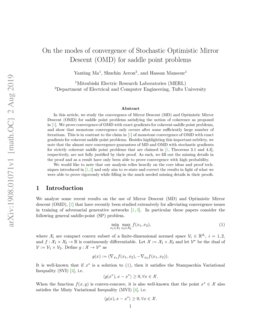 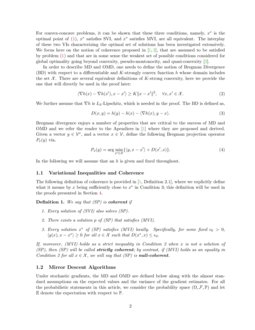 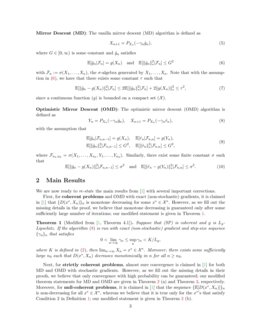 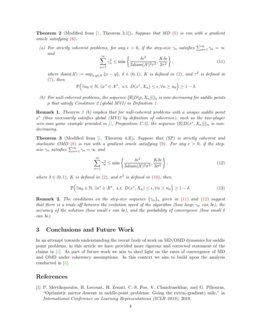 We analyze some recent results on the use of Mirror Descent (MD) and Optimistic Mirror descent (OMD), [1] that have recently been studied extensively for alleviating convergence issues in training of adversarial generative networks [3, 1]. In particular these papers consider the following general saddle-point (SP) problem.

where Xi are compact convex subset of a finite-dimensional normed space Vi∈Rdi, i=1,2, and f:X1×X2→R is continuously differentiable. Let X:=X1×X2 and let V∗ be the dual of V:=V1×V2. Define g:X→V∗ as

It is well-known that if x∗ is a solution to (1), then it satisfies the Stampacchia Variational Inequality (SVI) [4], i.e.

When the function f(x,y) is convex-concave, it is also well-known that the point x∗∈X also satisfies the Minty Variational Inequality (MVI) [4], i.e.

For convex-concave problems, it can be shown that these three conditions, namely, x∗ is the optimal point of (1), x∗ satisfies SVI, and x∗ satisfies MVI, are all equivalent. The interplay of these two VIs characterizing the optimal set of solutions has been investigated extensively. We focus here on the notion of coherence proposed in [2, 1], that are assumed to be satisfied by problem (1) and that are in some sense the weakest set of possible conditions considered for global optimality going beyond convexity, pseudo-montonocity, and quasi-convexity [2].

In order to describe MD and OMD, one needs to define the notion of Bregman Divergence (BD) with respect to a differentiable and K-strongly convex function h whose domain includes the set X. There are several equivalent definitions of K-strong convexity, here we provide the one that will directly be used in the proof later:

We further assume that ∇h is Lh-Lipschitz, which is needed in the proof. The BD is defined as,

where they are proposed and derived. Given a vector

y∈V∗, and a vector x∈V, define the following Bregman projection operator Px(y) via,

In the following we will assume that an h is given and fixed throughout.

The following definition of coherence is provided in [1, Definition 2.1], where we explicitly define what it means by x being sufficiently close to x∗ in Condition 3; this definition will be used in the proofs presented in Section 4.

We say that (SP) is coherent if

Under stochastic gradients, the MD and OMD are defined below along with the almost standard assumptions on the expected values and the variance of the gradient estimates. For all the probabilistic statements in this article, we consider the probability space

(Ω,F,P) and let E denote the expectation with respect to P.

where G∈[0,∞) is some constant and ^gn satisfies

with Fn:=σ(X1,…,Xn), the σ-algebra generated by X1,…,Xn. Note that with the assumption in (6), we have that there exists some constant τ such that

since a continuous function (g) is bounded on a compact set (X).

with the assumption that

We are now ready to re-state the main results from [1] with several important corrections.

First, for coherent problems and OMD with exact (non-stochastic) gradients, it is claimed in [1] that {D(x∗,Xn)}n is monotone decreasing for some x∗∈X∗. However, as we fill out the missing details in the proof, we believe that monotone decreasing is guaranteed only after some sufficiently large number of iterations; our modified statement is given in Theorem 1.

Suppose that (SP) is coherent and g is Lg-Lipschitz. If the algorithm (8) is run with exact (non-stochastic) gradient and step-size sequence {γn}n that satisfies

where K is defined in (2), then limn→∞Xn=x∗∈X∗. Moreover, there exists some sufficiently large n0 such that D(x∗,Xn) decreases monotonically in n for all n≥n0.

Next, for strictly coherent problems, almost sure convergence is claimed in [1] for both MD and OMD with stochastic gradients. However, as we fill out the missing details in their proofs, we believe that only convergence with high probability can be guaranteed; our modified theorem statements for MD and OMD are given in Theorem 2 (a) and Theorem 3, respectively. Moreover, for null-coherent problems, it is claimed in [1] that the sequence {E[D(x∗,Xn)]}n is non-decreasing for all x∗∈X∗, whereas we believe that it is true only for the x∗’s that satisfy Condition 2 in Definition 1; our modified statement is given in Theorem 2 (b).

Suppose that MD (5) is run with a gradient oracle satisfying (6).

Theorem 2 (b) implies that for null-coherent problems with a unique saddle point x∗ (thus necessarily satisfies global (MVI) by definition of coherence), such as the two-player zero-sum game example provided in [1, Proposition C.3], the sequence {E[D(x∗,Xn)]}n is non-decreasing.

Suppose that (SP) is strictly coherent and stochastic OMD (8) is run with a gradient oracle satisfying (9). For any ϵ>0, if the step-size γn satisfies ∑∞n=1γn=∞ and

The conditions on the step-size sequence {γn}n given in (11) and (12) suggest that there is a trade-off between the evolution speed of the algorithm (how large γn can be), the accuracy of the solution (how small ϵ can be), and the probability of convergence (how small δ can be).

In an attempt towards understanding the recent body of work on MD/OMD dynamics for saddle point problems, in this article we have provided more rigorous and corrected statement of the claims in [1]. As part of future work we aim to shed light on the rates of convergence of MD and OMD under coherency assumptions. In this context we aim to build upon the analysis conducted in [5].

Suppose that (SP) is coherent and g is L-Lipschitz. For any saddle point x∗∈X∗, the iterates of (OMD) with exact gradient satisfy

If moreover, p∈X∗ is (one of) the special saddle points that satisfy (MVI) globally, then

Note that the LHS of the above is low bounded by

by strong convexity of h. The RHS of the above is upper bounded by

by Cauchy-Schwarz and Lipschitz property of ∇h. Combining the two, we have

We are now ready to prove Theorem 1.

Let p be a saddle point of (SP) and satisfies (MVI) globally. Such p exists by definition of coherence. By (15) in Lemma 1, we have

Telescoping the above, we have

Rearranging the above, we have

where the last inequality follows by positivity of Bregman divergence. Taking the limit as n→∞ on both sides of the above inequality, we have limn→∞∑nk=1∥Yk−Xk∥2<∞, which implies that limn→∞∥Yn−Xn∥=0.

Next by compactness of X, we have that {Xn}n has a convergent subsequence {Xnk}k such that limk→∞Xnk=^x∈X. We show in the following that, in fact, ^x∈X∗. First notice that

Moreover, suppose that limnγn=γ, and so limk→∞γnk=γ as well. Then

Telescoping the above, we have

First we show that for all n≥n0,

Now starting with n=n0, we have

We first include a result from [1, Proposition B.4(b)], which will be used frequently in the proof of the theorem.

We are now ready to prove the theorem. The proof contains three steps:

We now show (i). Let p be one of the special saddle points that satisfy global (MVI). Define

where the last inequality follows by (MVI). Telescoping the above, we have