A hole in a graph is an induced cycle of length at least 4, and an antihole is the complement of an induced cycle of length at least 4. A hole or antihole is long if its length is at least 5. For an integer k, the k-prism is the graph consisting of two cliques of size k joined by a matching. The complexity of Maximum (Weight) Independent Set (MWIS) in long-hole-free graphs remains an important open problem. In this paper we give a polynomial time algorithm to solve MWIS in long-hole-free graphs with no k-prism (for any fixed integer k), and a subexponential algorithm for MWIS in long-hole-free graphs in general. As a special case this gives a polynomial time algorithm to find a maximum weight clique in perfect graphs with no long antihole, and no hole of length 6. The algorithms use the framework of minimal chordal completions and potential maximal cliques. 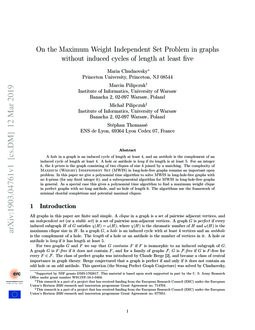 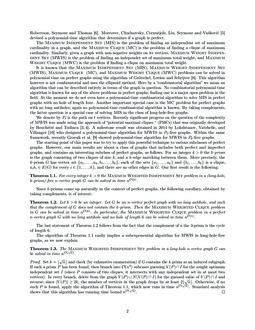 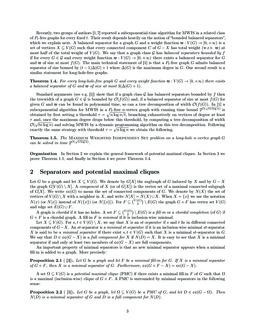 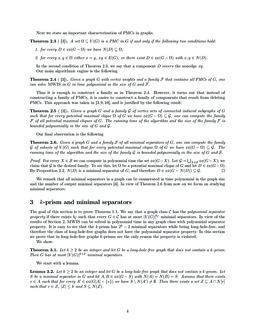 All graphs in this paper are finite and simple. A clique in a graph is a set of pairwise adjacent vertices, and an independent set (or a stable set) is a set of pairwise non-adjacent vertices. A graph G is perfect if every induced subgraph H of G satisfies χ(H)=ω(H), where χ(H) is the chromatic number of H and ω(H) is the maximum clique size in H. In a graph G, a hole is an induced cycle with at least 4 vertices and an antihole is the complement of a hole. The length of a hole or an antihole is the number of vertices in it. A hole or antihole is long if it has length at least 5.

For two graphs G and F we say that G contains F if F is isomorphic to an induced subgraph of G. A graph G is F-free if it does not contain F, and for a family of graphs F, G is F-free if G is F-free for every F∈F. The class of perfect graphs was introduced by Claude Berge [2]

, and became a class of central importance in graph theory. Berge conjectured that a graph is perfect if and only if it does not contain an odd hole or an odd antihole. This question (the Strong Perfect Graph Conjecture) was solved by Chudnovsky, Robertson, Seymour and Thomas

[6]. Moreover, Chudnovsky, Cornuéjols, Liu, Seymour and Vušković [5] devised a polynomial-time algorithm that determines if a graph is perfect.

We denote by Pt is the path on t vertices. Recently significant progress on the question of the complexity of MWIS was made using the approach of “potential maximal cliques “ (PMCs) that was originally developed by Bouchitté and Todinca [3, 4]. A milestone result was obtained in 2014 by Lokshtanov, Vatshelle, and Villanger [10] who designed a polynomial-time algorithm for MWIS in P5-free graphs. Within the same framework, recently Grzesik et al. [9] showed polynomial-time algorithm for MWIS in P6-free graphs.

The starting point of this paper was to try to apply this powerful technique to various subclasses of perfect graphs. However, our main results are about a class of graphs that includes both perfect and imperfect graphs, and contains an interesting subclass of perfect graphs, as follows. For an integer k>0 the k-prism is the graph consisting of two cliques of size k, and a k-edge matching between them. More precisely, the k-prism G has vertex set {a1,…,ak,b1,…,bk}; each of the sets {a1,…,ak} and {b1,…,bk} is a clique, aibi∈E(G) for every i∈{1,…,k}, and there are no other edges in G. Our first result is the following:

For every integer k>0 the Maximum Weighted Independent Set problem in a (long-hole, k-prism)-free n-vertex graph G can be solved in time nO(k).

Since k-prisms come up naturally in the context of perfect graphs, the following corollary, obtained by taking complements, is of interest:

The last statement of Theorem 1.2 follows from the fact that the complement of a the 3-prism is the cycle of length 6.

The algorithm of Theorem 1.1 easily implies a subexponential algorithm for MWIS in long-hole-free graphs, as we now explain.

The Maximum Weighted Independent Set problem in a long-hole n-vertex graph G can be solved in time nO(√n).

Set k=⌊√n⌋ and check (by exhaustive enumeration) if G contains the k-prism as an induced subgraph. If such a prism P has been found, then branch into O(n2) subcases guessing V(P)∩I for the sought optimum independent set I (since P consists of two cliques, it intersects with any independent set in at most two vertices). In every branch, delete from the graph V(P)∪N(V(P)∩I) for the guessed value of V(P)∩I and recurse; since |V(P)|≥2k, the number of vertices in the graph drops by at least 2⌊√n⌋. Otherwise, if no such P is found, apply the algorithm of Theorem 1.1, which now runs in time nO(√n). Standard analysis shows that this algorithm has running time bound nO(√n). ∎

For every long-hole-free graph G and every weight function w:V(G)→[0,+∞) there exists a balanced separator of G and w of size at most 3(Δ(G)+1).

Standard arguments (see e.g. [1]) show that if a graph class G has balanced separators bounded by f then the treewidth of a graph G∈G is bounded by O(f(G)) and, if a balanced separator of size at most f(G) for given G and w can be found in polynomial time, so can a tree decomposition of width O(f(G)). In [1] a subexponential algorithm for MWIS in a Pt-free n-vertex graph with running time bound 2O(√tnlogn) is obtained by first setting a threshold τ=√nlogn/t, branching exhaustively on vertices of degree at least τ and, once the maximum degree drops below this threshold, by computing a tree decomposition of width O(√tnlogn) and solving MWIS by a dynamic programming algorithm on this tree decomposition. Following exactly the same strategy with threshold τ=√nlogn we obtain the following.

The Maximum Weighted Independent Set problem on a long-hole n-vertex graph G can be solved in time 2O(√nlogn).

A graph is chordal if it has no holes. A set F⊆(V(G)2)∖E(G) is a fill-in or a chordal completion (of G) if G+F is a chordal graph. A fill-in F is minimal if it is inclusion-wise minimal.

A set Ω⊆V(G) is a potential maximal clique (PMC) if there exists a minimal fill-in F of G such that Ω is a maximal (inclusion-wise) clique of G+F. A PMC is surrounded by minimal separators in the following sense:

Next we state an important characterization of PMCs in graphs.

A set Ω⊆V(G) is a PMC in G if and only if the following two conditions hold:

In the second condition of Theorem 2.3, we say that a component D covers the nonedge xy.

Our main algorithmic engine is the following.

Given a graph G with vertex weights and a family F that contains all PMCs of G, one can solve MWIS in G in time polynomial in the size of G and F.

Our final observation is the following

Given a graph G and a family S of all minimal separators of G, one can compute the family G of subsets of V(G) such that for every potential maximal clique Ω of G we have cc(G−Ω)⊆G. The running time of the algorithm and the size of the family G is bounded polynomially in the size of G and S.

For every X∈S we can compute in polynomial time the set cc(G−X). Let G=⋃X∈Scc(G−X); we claim that G is the desired family. To see this, let Ω be a potential maximal clique of G and let D∈cc(G−Ω). By Proposition 2.2, N(D) is a minimal separator of G, and therefore D∈cc(G−N(D))⊆G. ∎

Let k≥2 be an integer and let G be a long-hole-free graph that does not contain a k-prism. Then G has at most |V(G)|k+2 minimal separators.

We start with a lemma.

The statement is straightforward for |V(G)|≤2.

Let S⊆V(G) be such that ζG(S)>0, that is, S is a minimal separator in G. We consider two cases.

We say that S is special if

If S is special, then by Lemma 3.2 there exists Z⊆A of size at most k such that S⊆NG(Z). Thus, every connected component B∈cc(G−S) distinct from A with NG(B)=S is a connected component of G−N[Z]. Since there are at most |V(G)|k choices for Z, we infer that the contribution to the sum ∑S∈V(G)ζG(S) from the sets S that are special is at most |V(G)|k+1.

4 Dominating a PMC with three vertices

In this section we prove Theorem 1.4. To this end, we show that in a long-hole-free graph G every PMC is contained in a neighborhood of at most three vertices of G. This is done by a sequence of structural lemmas that follows next.

Let G be a long-hole-free graph, let S be a minimal separator in G, and let A∈cc(G−S) satisfy N(A)=S. Then for every independent set M⊆S there exist a vertex a∈A with M⊆N(a).

For every a∈A let f(a)=N(a)∩M. Suppose that M∖f(a)≠∅ for every a∈A. Then there are two vertices u,v in A with f(u)≠f(v) and such that both f(u) and f(v) are maximal (inclusion-wise). Choose a,a′∈A with the following properties:

By the definition of Z0, (4) implies S∖N[x]⊆N(a)∪N(b). This finishes the proof of the lemma. ∎

Suppose that Ω⊈N[v] but there is no component D as in the statement of the lemma. Let A⊆Ω∖N[v] be inclusion-wise minimal such that there is no component D∈cc(G−Ω) with A∪{v}⊆N(D). Observe that A is non-empty, because there is at least one non-edge within Ω with one endpoint v, so in particular there is at least one component D∈cc(G−Ω) satisfying v∈N(D). If A is an independent set, then so is A∪{v}, and then Lemma 4.3 contradicts the choice of A. Hence, there exists an edge xy∈E(G[A]). By the minimality of A, there exist a component Dx∈cc(G−Ω) with (A∖{y})∪{v}⊆N(Dx) and a component Dy∈cc(G−Ω) with (A∖{x})∪{v}⊆N(Dy). By the choice of A, we have y∉N(Dx) and x∉N(Dy). Let Px be a shortest path from x to v via Dx and similarly define Py in Dy. But then x−Px−v−Py−y−x is a long hole in G, a contradiction. ∎

We can now deduce the following:

For every long-hole-free graph G and for every potential maximal clique Ω in G there exists a set Z⊆V(G) of size at most 3 such that Ω⊆N[Z].

Let G and w be as in the statement of the theorem. By Theorem 4.6, it suffices to show that there is a potential maximal clique in G that is a balanced separator with respect to w. To this end, let F be a minimal chordal completion of G. A folklore result (see e.g. [9]) is that G+F admits a tree decomposition where the bags are exactly the maximal cliques of G+F. Let T be the tree of the decomposition. For every edge e∈E(T), let Te1 and Te2 be the two components of T−{e} and for i=1,2 let Vei be the union of all the bags of Tei. Orient the edge e from the endpoint in Tei with smaller weight of Vei to the one with the larger weight, breaking ties arbitrarily. Let t∈V(T) be a node of zero outdegree. Then it can be easily checked that the bag at t is a balanced separator and we are done. ∎