On the Longest Spanning Tree with Neighborhoods

We study a maximization problem for geometric network design. Given a set of n compact neighborhoods in R^d, select a point in each neighborhood, so that the longest spanning tree on these points (as vertices) has maximum length. Here we give an approximation algorithm with ratio 0.511, which represents the first, albeit small, improvement beyond 1/2. While we suspect that the problem is NP-hard already in the plane, this issue remains open. 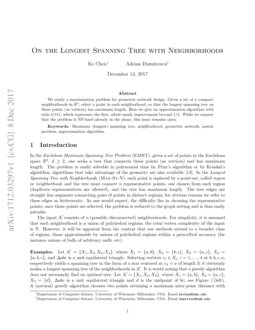 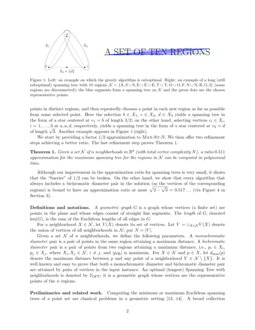 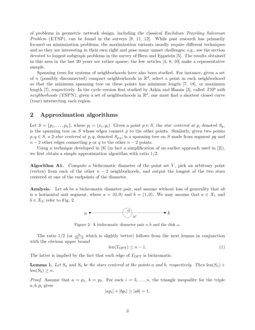 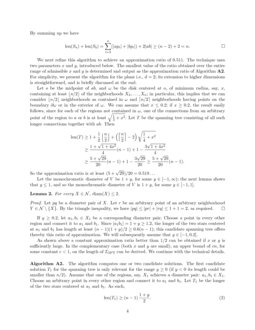 In the Euclidean Maximum Spanning Tree Problem (EMST), given a set of points in the Euclidean space Rd, d≥2, one seeks a tree that connects these points (as vertices) and has maximum length. The problem is easily solvable in polynomial time by Prim’s algorithm or by Kruskal’s algorithm; algorithms that take advantage of the geometry are also available [13]. In the Longest Spanning Tree with Neighborhoods (Max-St-N), each point is replaced by a point-set, called region or neighborhood, and the tree must connect n representative points, one chosen from each region (duplicate representatives are allowed), and the tree has maximum length. The tree edges are straight line segments connecting pairs of points in distinct regions; for obvious reasons we refer to these edges as bichromatic. As one would expect, the difficulty lies in choosing the representative points; once these points are selected, the problem is reduced to the graph setting and is thus easily solvable.

The input N consists of n (possibly disconnected) neighborhoods. For simplicity, it is assumed that each neighborhood is a union of polyhedral regions; the total vertex complexity of the input is N. However, it will be apparent from the context that our methods extend to a broader class of regions, those approximable by unions of polyhedral regions within a prescribed accuracy (for instance unions of balls of arbitrary radii, etc).

We start by providing a factor 1/2 approximation to Max-St-N. We then offer two refinement steps achieving a better ratio. The last refinement step proves Theorem 1.

Given a set N of n neighborhoods in Rd (with total vertex complexity N), a ratio 0.511 approximation for the maximum spanning tree for the regions in N can be computed in polynomial time.

Although our improvement in the approximation ratio for spanning trees is very small, it shows that the “barrier” of 1/2 can be broken. On the other hand, we show that every algorithm that always includes a bichromatic diameter pair in the solution (as the vertices of the corresponding regions) is bound to have an approximation ratio at most √2−√3=0.517… (via Figure 4 in Section 3).

A geometric graph G is a graph whose vertices (a finite set) are points in the plane and whose edges consist of straight line segments. The length of G, denoted len(G), is the sum of the Euclidean lengths of all edges in G.

Computing the minimum or maximum Euclidean spanning trees of a point set are classical problems in a geometric setting [13, 14]. A broad collection of problems in geometric network design, including the classical Euclidean Traveling Salesman Problem (ETSP), can be found in the surveys [9, 11, 12]. While past research has primarily focused on minimization problems, the maximization variants usually require different techniques and so they are interesting in their own right and pose many unmet challenges; e.g., see the section devoted to longest subgraph problems in the survey of Bern and Eppstein [5]. The results obtained in this area in the last 20 years are rather sparse; the few articles [4, 8, 10] make a representative sample.

Using a technique developed in [8] (in fact a simplification of an earlier approach used in [2]), we first obtain a simple approximation algorithm with ratio 1/2.

Compute a bichromatic diameter of the point set V, pick an arbitrary point (vertex) from each of the other n−2 neighborhoods, and output the longest of the two stars centered at one of the endpoints of the diameter.

Let ab be a bichromatic diameter pair, and assume without loss of generality that ab is a horizontal unit segment, where a=(0,0) and b=(1,0). We may assume that a∈X1 and b∈X2; refer to Fig. 2.

The latter is implied by the fact that each edge of TOPT is bichromatic.

Let Sa and Sb be the stars centered at the points a and b, respectively. Then len(Sa)+len(Sb)≥n.

By summing up we have

We next refine this algorithm to achieve an approximation ratio of 0.511. The technique uses two parameters x and y, introduced below. The smallest value of the ratio obtained over the entire range of admissible x and y is determined and output as the approximation ratio of Algorithm A2. For simplicity, we present the algorithm for the plane i.e., d=2; its extension to higher dimensions is straightforward, and is briefly discussed at the end.

Let o be the midpoint of ab, and ω be the disk centered at o, of minimum radius, say, x, containing at least ⌊n/2⌋ of the neighborhoods X3,…,Xn; in particular, this implies that we can consider ⌊n/2⌋ neighborhoods as contained in ω and ⌈n/2⌉ neighborhoods having points on the boundary ∂ω or in the exterior of ω. We can assume that x≤0.2; if x≥0.2, the result easily follows, since for each of the regions not contained in ω, one of the connections from an arbitrary point of the region to a or b is at least √14+x2. Let T be the spanning tree consisting of all such longer connections together with ab. Then

Let pq be a diameter pair of X. Let r be an arbitrary point of an arbitrary neighborhood Y∈N∖{X}. By the triangle inequality, we have |pq|≤|pr|+|rq|≤1+1=2, as required. ∎

As shown above a constant approximation ratio better than 1/2 can be obtained if x or y is sufficiently large. In the complementary case (both x and y are small), an upper bound of cn, for some constant c<1, on the length of TOPT can be derived. We continue with the technical details.

The algorithm computes one or two candidate solutions. The first candidate solution T1 for the spanning tree is only relevant for the range y≥0 (if y<0 its length could be smaller than n/2). Assume that one of the regions, say, X1 achieves a diameter pair: a1,b1∈X1. Choose an arbitrary point in every other region and connect it to a1 and b1. Let T1 be the longer of the two stars centered at a1 and b1. As such,

The second candidate solution T2 for the spanning tree connects each of the regions contained in ω with either a or b at a cost of at least 1/2 (based on the fact that max{|api|,|bpi|}≥|ab|/2=1/2). For each region Xi, i≥3, select the vertex of Xi that is farthest from o and connect it with a or b, whichever yields the longer connection. As such, if Xi is not contained in ω, the connection length is at least √14+x2. Finally add the unit segment ab. Then,

The above expression can be simplified as follows. If n is even, (3) yields

Consequently, for every n we have

Let Ω be be the disk of radius R(y) centered at o, where

V is contained in Ω.

Assume for contradiction that there exists a point pi∈Xi at distance larger than R(y) from o. By symmetry, we may assume that |api|≤|bpi| and that pi lies in the closed halfplane above the line containing ab.

First consider the case y≤0; it follows that |bpi|>√14+34=1. If i=2, then b,pi∈X2, which contradicts the definition of y; otherwise b∈X2 and pi∈Xi are points in different neighborhoods at distance larger than 1, in contradiction with the original assumption on the bichromatic diameter of V.

Next consider the case y≥0; it follows that |bpi|≥√14+(√32+2√3y)2>1+y. If i=2, then b,pi∈X2, which contradicts the definition of y; otherwise b∈X2 and pi∈Xi are points in different neighborhoods at distance larger than 1, in contradiction with the original assumption on the bichromatic diameter of V.

In either case (for any y) we have reached a contradiction, and this concludes the proof. ∎

Let N={X1,…,Xn} be a set of n neighborhoods and TOPT be an optimal spanning tree assumed to connect points (vertices) pi∈Xi for i=1,…,n. For every j∈[n], we have

Consider TOPT rooted at pj. Let π(v) denote the parent of a (non-root) vertex v. Uniquely assign each edge π(v)v of TOPT to vertex v. The inequality len(π(v)v)≤dmax(v) holds for each edge of the tree. By adding up the above inequalities, the lemma follows. ∎

By definition, dmax(p)≤1. By Lemma 3, the vertex set V is contained in Ω; equivalently, all neighborhoods in N are contained in Ω. By the triangle inequality, dmax(p)≤|po|+R(y)≤x+R(y), as claimed. ∎

If n is even, the above inequality yields

while if n is odd, it yields

Therefore len(TOPT)≤n−12(1+x+R(y)) in both cases. Then the lemma follows by adjoining the trivial upper bound in equation (1). ∎

3 Analysis of Algorithm A2

We start with a preliminary argument for ratio 0.506 that comes with a simpler proof. We then give a sharper analysis for ratio 0.511.

A first bound on the approximation ratio of A2.

We next obtain an improved lower bound on len(T2). Recall that Algorithm A2 selects the vertex of Xi that is farthest from o for every i≥3, and connects it with a or b, whichever yields the longer connection. In particular, the length of this connection is at least √14+x2i for i=3,…,m+2. Since the function √x is concave, Jensen’s inequality yields:

hence we obtain the following sharpening of the lower bound in (4):

To analyze the approximation ratio we distinguish two cases:

This concludes the proof for the first case.

so g(z,y) reaches its minimum value on the curve γ. On this curve, let

In region IV, g(z,y)=√1+4z2/2 which increases monotonically with respect to z. So the minimum value is again ρ and is achieved when z is minimized, i.e., z=z0.

Its partial derivative is negative, i.e.,

In summary, we showed that

establishing the approximation ratio in Theorem 1.

Time complexity of Algorithm A2.

It is straightforward to implement the algorithm to run in quadratic time for any fixed d. All interpoint distances can be easily computed in O(N2) time. Similarly the farthest point from o in each region (over all regions) can all be computed in O(N) time. Subquadratic algorithms for computing the diameter and farthest bichromatic pairs in higher dimensions can be found in [1, 6, 15, 16, 17]; see also the two survey articles [9, 11].

We gave two approximation algorithms for Max-St-N: a very simple one with ratio 1/2 and another simple one (with slightly more elaborate analysis but equally simple principles) with ratio 0.511. The following variants represent extensions of the Euclidean maximum TSP for the neighborhood setting.

In the Euclidean Maximum Traveling Salesman Problem, given a set of points in the Euclidean space Rd, d≥2, one seeks a cycle (a.k.a. tour) that visits these points (as vertices) and has maximum length; see [4]. In the Maximum Traveling Salesman Problem with Neighborhoods (Max-Tsp-N), each point is replaced by a point-set, called region or neighborhood, and the cycle must connect n representative points, one chosen from each region (duplicate representatives are allowed), and the cycle has maximum length. Since the original variant with points is NP-hard when d≥3 (as shown in [4]), the variant with neighborhoods is also NP-hard for d≥3. The complexity of the original problem in the plane is unsettled, although the problem is believed to be NP-hard [10]. In the path variant, one seeks a path of maximum length.

The following problems are proposed for future study: