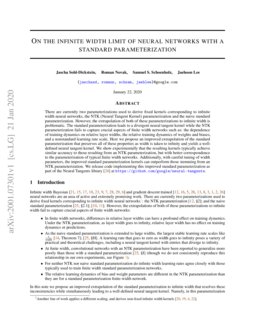 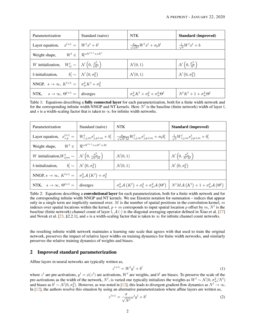 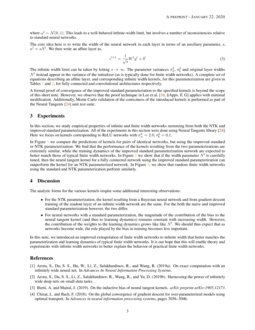 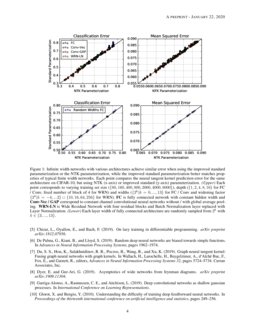 Wide neural networks have proven to be a rich class of architectures for...
Anders Andreassen, et al. ∙

In this note we propose an improved extrapolation of the standard parameterization to infinite width that resolves these inconsistencies while simultaneously leading to a well-defined neural tangent kernel. Namely, in this parameterization the resulting infinite width network maintains a learning rate scale that agrees with that used to train the original network, preserves the impact of relative layer widths on training dynamics for finite width networks, and similarly preserves the relative training dynamics of weights and biases.

Affine layers in neural networks are typically written as,

where zl are pre-activations, yl=ϕ(zl) are activations, Wl are weights, and bl are biases. To preserve the scale of the pre-activations as the width of the network, Nl, is varied one typically initializes the weights as Wl∼N(0,σ2w/Nl) and biases as bl∼N(0,σ2b). However, as was noted in [jacot2018neural], this leads to divergent gradient flow dynamics as Nl→∞. In [jacot2018neural], the authors resolve this situation by using an alternative parameterization where affine layers are written as,

where ωl∼N(0,1). This leads to a well-behaved infinite-width limit, but involves a number of inconsistencies relative to standard neural networks.

The core idea here is to write the width of the neural network in each layer in terms of an auxiliary parameter, s, nl=sNl. We then write an affine layer as,

The infinite width limit can be taken by letting s→∞

σ2w,σ2b and original layer widths Nl instead appear in the variance of the initializer (as is typically done for finite width networks). A complete set of equations describing an affine layer, and corresponding infinite width kernels, for this parameterization are given in Tables 1 and 2, for fully connected and convolutional architectures respectively.

A formal proof of convergence of the improved standard parameteriation to the specified kernels is beyond the scope of this short note. However, we observe that the proof technique in lee2019wide applies with minimal modification. Additionally, Monte Carlo validation of the correctness of the introduced kernels is performed as part of the Neural Tangents [novak2020neural] unit test suite.

In this section, we study empirical properties of infinite and finite width networks stemming from both the NTK and improved standard parameterization. All of the experiments in this section were done using Neural Tangents library [novak2020neural]. Here we focus on kernels corresponding to ReLU networks with σ2w=2.0,σ2b=0.1.

The analytic forms for the various kernels inspire some additional interesting observations: