On the Importance of Strong Baselines in Bayesian Deep Learning

Like all sub-fields of machine learning, Bayesian Deep Learning is driven by empirical validation of its theoretical proposals. Given the many aspects of an experiment, it is always possible that minor or even major experimental flaws can slip by both authors and reviewers. One of the most popular experiments used to evaluate approximate inference techniques is the regression experiment on UCI datasets. However, in this experiment, models which have been trained to convergence have often been compared with baselines trained only for a fixed number of iterations. What we find is that if we take a well-established baseline and evaluate it under the same experimental settings, it shows significant improvements in performance. In fact, it outperforms or performs competitively with numerous to several methods that when they were introduced claimed to be superior to the very same baseline method. Hence, by exposing this flaw in experimental procedure, we highlight the importance of using identical experimental setups to evaluate, compare and benchmark methods in Bayesian Deep Learning. 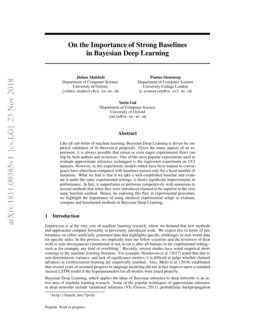 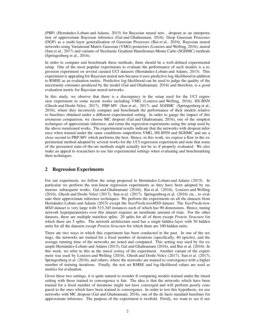 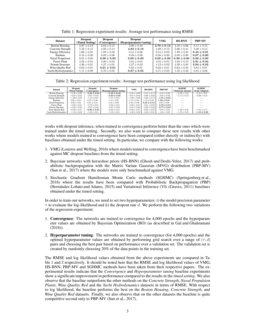 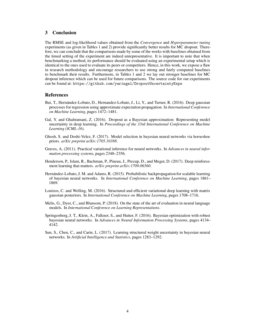 Empiricism is at the very core of machine learning research, where we demand that new methods and approaches compare favorably to previously introduced work. We expect this in terms of performance on either artificially generated data that highlights specific challenges and/or real-world data for specific tasks. In this process, we implicitly rely on fellow scientists and reviewers to note discrepancies (intentional or not, to err is after all human) in the experimental setting – such as for example, any kind of overfitting.111http://hunch.net/?p=22 Recently, several studies have noted empirical shortcomings in the machine learning literature. For example, Henderson et al. (2017)

observed that due to non-determinism, variance, and lack of significance metrics, it is difficult to judge whether claimed advances in reinforcement learning are empirically justified. Also,

established that several years of assumed progress in language modeling did not in fact improve upon a standard stacked LSTM model if the hyperparameters for all models were adequately tuned.

Bayesian Deep Learning applies the ideas of Bayesian inference to deep networks and is an active area of machine learning research. Popular techniques for approximate inference in deep networks include variational inference (VI)

A well-defined experimental setup is necessary to compare and benchmark these methods; one of the most popular setups is a regression experiment on a number of curated UCI datasets (Hernández-Lobato and Adams, 2015)

In this study, we observe a discrepancy in the setup used for the UCI regression experiment in some recent works, in that they compare their model to baselines obtained under a different experimental setting. Concretely, this applies to VMG (Louizos and Welling, 2016), HS-BNN (Ghosh and Doshi-Velez, 2017), PBP-MV, (Sun et al., 2017) and SGHMC (Springenberg et al., 2016). In order to gauge the impact of this erroneous comparison, we reevaluate the regression experiments of the above-mentioned works compared to MC dropout (Gal and Ghahramani, 2016) in the same setting. The experimental results indicate that the networks with dropout inference – when trained under the same conditions – outperform VMG, HS-BNN, and SGHMC; and they are a close second to PBP-MV. These results suggest that several methods, when introduced, erroneously claimed state of the art performance in their publications.

We perform the non-linear regression experiments proposed in

Hernández-Lobato and Adams (2015), which have been adopted to evaluate approximate inference techniques in numerous subsequent works: Gal and Ghahramani (2016), Bui et al. (2016), Louizos and Welling (2016), Ghosh and Doshi-Velez (2017), Sun et al. (2017), Springenberg et al. (2016) etc. All the datasets from Hernández-Lobato and Adams (2015) are used, apart from the YearPredictionMSD dataset. The YearPredictionMSD dataset is very large with 515,345 instances, each of which has 90 dimensions. Hence, tuning network hyperparameters over this dataset requires an inordinate amount of time. Our network architecture has a single hidden layer with 50 hidden units for all datasets, except for the Protein Structure dataset for which there are 100 hidden units.

There are two ways in which this experiment has been conducted in the past. In the first, the networks are trained for a fixed number of iterations (specifically, 40 epochs), and the average training time of the networks are noted and compared. This setting was used by

Hernández-Lobato and Adams (2015), Gal and Ghahramani (2016), and Bui et al. (2016). In this work, we refer to this as the timed setting of the experiment. In the second variant of the experiment, the networks are trained to convergence with a higher number of training iterations and was used by Louizos and Welling (2016), Ghosh and Doshi-Velez (2017), Sun et al. (2017), Springenberg et al. (2016), and others. For both variants, the test set RMSE and log-likelihood values are used as the evaluation metrics.

Given these two settings, it is a natural question to ask if models trained under the timed setting and those trained to convergence are comparable. One might argue that networks trained for a fixed number of iterations might not have converged and will thus perform poorly compared to those which have been trained to convergence. To test this hypothesis, we use networks with MC dropout (Gal and Ghahramani, 2016) – one of the de facto standard baselines for approximate inference.

We compare with the following works: VMG (Louizos and Welling, 2016)

, where models trained to convergence have been benchmarked against MC dropout baselines from the timed setting; Bayesian networks with horseshoe priors (HS-BNN)

(Ghosh and Doshi-Velez, 2017) and probabilistic backpropagation with the Matrix Variate Gaussian (MVG) distribution (PBP-MV) (Sun et al., 2017), where the models were only benchmarked against VMG; Stochastic Gradient Hamiltonian Monte Carlo methods (SGHMC) (Springenberg et al., 2016), where the results have been compared with Probabilistic Backpropagation (PBP) (Hernández-Lobato and Adams, 2015) and Variational Inference (VI) (Graves, 2011) baselines obtained under the timed setting.

There are two hyperparameters: i) the model precision parameter τ to evaluate the log-likelihood and ii) the dropout rate d. We perform the following two variations of the regression experiment:

The RMSE and log likelihood values obtained from the above experiments are compared in Table 1 and 2 respectively. It should be noted that the RMSE and log likelihood values of VMG, HS-BNN, PBP-MV, and SGHMC have been taken from their respective papers. The experimental results indicate that the Convergence and Hyperparameter tuning baseline experiments show a substantial improvement in performance compared to the results in the timed setting. We also observe that the baseline outperform the other methods on the Concrete Strength, Naval Propulsion Plants, Wine Quality Red, and Yacht Hydrodynamics datasets in terms of RMSE. With respect to log likelihood, the baseline performs best on the Boston Housing, Concrete Strength, and Wine Quality Red datasets. Finally, we also observe that on the other datasets the baseline is competitive – second only to PBP-MV (Sun et al., 2017).

The RMSE and log-likelihood values obtained from the Convergence and Hyperparameter tuning experiments (as given in Tables 1 and 2) provide substantially better results for MC dropout. We conclude that previous comparisons with baselines obtained from the timed setting are unrepresentative, as the models in one setting had not reached convergence. In summary, when benchmarking a method, its performance should always be evaluated using an experimental setup identical to the one used to evaluate its peers.

The source code for our experiments can be found at: https://github.com/yaringal/DropoutUncertaintyExps