X-ray security screening is in widespread use to maintain transportation security against a wide range of potential threat profiles. Of particular interest is the recent focus on the use of automated screening approaches, including the potential anomaly detection as a methodology for concealment detection within complex electronic items. Here we address this problem considering varying segmentation strategies to enable the use of both object level and sub-component level anomaly detection via the use of secondary convolutional neural network (CNN) architectures. Relative performance is evaluated over an extensive dataset of exemplar cluttered X-ray imagery, with a focus on consumer electronics items. We find that sub-component level segmentation produces marginally superior performance in the secondary anomaly detection via classification stage, with true positive of  98 with a  3 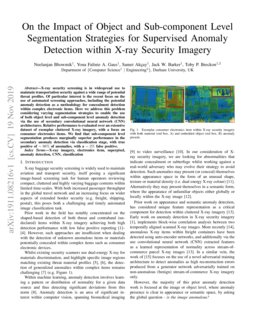 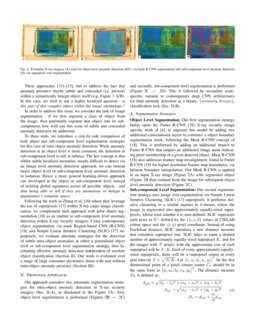 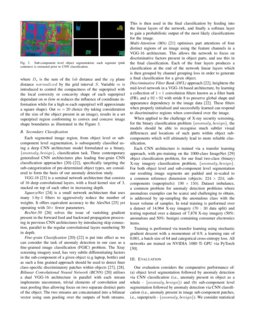 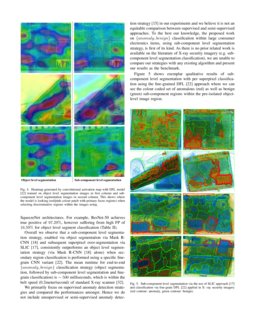 Prior work in the field has notably concentrated on the shaped-based detection of both threat and contraband (undeclared) items within X-ray imagery achieving both high detection performance with low false positive reporting [30, 15, 3, 4]. However, such approaches are insufficient when dealing with the detection of unknown anomalous items or materials potentially concealed within complex items such as consumer electronic devices.

Within machine learning, anomaly detection involves learning a pattern or distribution of normality for a given data source and thus detecting significant deviations from this norm

[23] to video surveillance [16]. In our consideration of X-ray security imagery, we are looking for abnormalities that indicate concealment or subterfuge whilst working against a real-world adversary who may evolve their strategy to avoid detection. Such anomalies may present (or conceal) themselves within appearance space in the form of an unusual shape, texture or material density (i.e. dual energy X-ray colour) [9]. Alternatively they may present themselves in a semantic form, where the appearance of unfamiliar objects either globally or locally within the X-ray image [6].

Prior work on appearance and semantic anomaly detection, has considered unique feature representation as a critical component for detection within cluttered X-ray imagery [10]. Early work on anomaly detection in X-ray security imagery [30], implements block-wise correlation analysis between two temporally aligned scanned X-ray images. More recently [5], anomalous X-ray items within freight containers have been detected using auto-encoder networks, and additionally via the use convolutional neural network (CNN) extracted features as a learned representation of normality across stream-of-commerce parcel X-ray images [10]. In a similar vein, the work of [2] focuses on the use of a novel adversarial training architecture to detect anomalies as high reconstruction errors produced from a generator network adversarially trained on non-anomalous (benign) stream-of-commerce X-ray imagery only.

However, the majority of this prior anomaly detection work is focused at the image or object level, where anomaly presence is clear in appearance or semantic space, by asking the global question - is the image anomalous?

These approaches [5, 10, 2], fail to address the fact that anomaly presence maybe subtle and concealed (i.e. present) within a semantically benign object itself (e.g. Figure 1 A/B). In this case, we wish to ask a highly localised question - is this part of this complex object within the image anomalous ?

In order to address this issue, we consider the task of image segmentation - if we first segment a class of object from the image, then potentially segment that object into its sub-components how well can this issue of subtle and concealed anomaly detection be addressed.

Following the work in Zhang et al, [31] where they leverage the use of superpixels [1] within X-ray cargo image classification, we complement such approach with prior object segmentation [11] as an enabler to sub-component level anomaly detection within X-ray security imagery. Using contemporary object segmentation via mask Region-based CNN (R-CNN) [11] and Simple Linear Iterative Clustering (SLIC) [1] superpixels, we evaluate alternate strategies for the detection of subtle intra-object anomalies at either a generalised object level or sub-component level segmentation strategy, thus facilitating effective anomaly detection independent of resolute object classification (Section II). Our work is evaluated over a range of large consumer electronics items with and without intra-object anomaly presence (Section III).

2A) with segmented object (Figure 2B then isolated from the image for subsequent object level anomaly detection (Figure 2C).

where Ds is the sum of the lab distance and the xy plane distance normalized by the grid interval S. Variable m is introduced to control the compactness of the superpixel with the local convexity or concavity shape of each superpixel dependant on m (low m reduces the influence of coordinate information while for a high m each superpixel will approximate a square shape). Our m=20 choice (by taking consideration of the size of the object present in an image), results in a set superpixel region conforming to convex and concave image shape boundaries as illustrated in the Figure 3.

VGG-16 [24] is a seminal network architecture that consists of 16 deep convolutional layers, with a fixed kernel size of 3, stacked on top of each other in increasing depth.

SqueezeNet [14] is a small network architecture that uses many 1-by-1 filters to aggressively reduce the number of weights. It offers equivalent accuracy to the AlexNet [17] yet operating with 50× fewer parameters.

ResNet-50 [12] solves the issue of vanishing gradient present in the forward feed and backward propagation processing in previous CNN architectures by introducing skip connection, parallel to the regular convolutional layers numbering 50 in depth.

Fine-grain Classification [18, 32, 27] is put into effect as we can consider the task of anomaly detection in our case as a fine-grained image classification (FGIC) problem. The Xray screening imagery used, has very subtle differentiating factors in the sub-component of a given object (e.g laptop, bottle) and as such a fine grained approach should be used to detect finer class-specific discriminatory patches within objects [13, 28]. Bilinear Convolutional Neural Network (BCNN) [18]

utilises a dual VGG-16 architecture in parallel with each stream implements uncommon, trivial elements of convolution and max pooling thus allowing focus on two separate distinct parts of the object. The two streams are concatenated into a bilinear vector using sum pooling over the outputs of both streams. This is then used in the final classification by feeding into the linear layers of the network, and finally a softmax layer to gain a probabilistic output of the most likely classifications for the image.

Multi-Attention (MA) [32] optimises part attentions of four distinct regions of an image using the feature channels in a VGG-16 architecture. This allows the network to focus on discriminative factors present in object parts, and use this in the final classification. Each of the four layers produces a classification at the end of the network linear layers which is then grouped by channel grouping loss in order to generate a final classification for a given object. Discriminative Filter Bank (DFL) approach [27], heightens the mid-level network in a VGG-16 based architecture, by learning a collection of 1×1 convolution filters known as a filter bank (FB), and a 92×92

[27]. These filters when properly initialised and successfully learned can respond to discriminative regions when convoluted over the image.

When applied to the challenge of X-ray security screening, for the binary classification problem {anomaly,benign}, the models should be able to recognise much subtler visual differences and locations of such parts within object sub-components which will ultimately lead to more reliable classification.

Each CNN architecture is trained via a transfer learning approach, with pre-training on the 1000-class ImageNet

. For both object level and sub-component level segmentation our resulting image segments are padded and re-scaled to a common reference dimension (objects:

224×224; sub-components (superpixels): 190×150). Dataset imbalance, a common problem for anomaly detection problems where anomalous examples can be scarce and challenging to obtain, is addressed by up-sampling the anomalous class with the lesser volume of samples. In total training is performed over a dataset of 14,964 X-ray imagery (70:30 data split) and testing reported over a dataset of 7,878 X-ray imagery (50%: anomalous and 50%: benign) containing consumer electronics items.

Training is performed via transfer learning using stochastic gradient descent with a momentum of 0.9, a learning rate of 0.001, a batch size of 64 and categorical cross-entropy loss. All networks are trained on NVIDIA 1080 Ti GPU via PyTorch

(F1), True Positive (TP) and False Positive (FP) as presented in Tables I and II.

Fine grain classification model (DFL [27]) offer the lowest false positive and maximal accuracy for both segmentation strategies (Table I). We can deduce that increased levels isolation via segmentation to the sub-component level improves the performance of the discriminative feature space learnt by the fine-grain technique [27, 32, 18] whilst more classical object classification CNN architectures perform only marginally better on objects than sub-components (Table II).

whilst trained on object-level and sub-component level segmentation data respectively. They are generated on the Rectified Linear Unit (ReLU) activations of the final layer before the fully connected layer in the VGG-16

[24] architecture of DFL. It is evident when inspecting these that the sub-level components (Figure 4 second column) show attention over the anomalous parts of the laptops in each image while the object-level analysis (Figure 4 first column) shows relatively sporadic sparse attention over the images. This provides qualitative visualization supporting the performance of the sub-component level segmentation strategy outperforming object level segmentation.

By enhancing the intermediate layer within the VGG-16 via a filter bank [27], we can hypothesise that this allows it to learn edge, corner and texture detail on specific sub-components at finer-level of the candidate region presented. As a result, the learned feature representation of anomaly against benign is highly discriminative leading to a significantly lower false positive than any other technique - at both the object and sub-component level (Tables I and II).

Binary classification via CNN using same VGG-16 architecture can achieve high true positive detection at the object level but at the expense of the highest false positive (TP: 94.25, FP: 39.47 - Table II). This can also be observed for the ResNet and SqueezeNet architectures. For example, ResNet-50 achieves true positive of 97.29%, however suffering from high FP of 16.59% for object level segment classification (Table II).

We primarily focus on supervised anomaly detection strategies and compared the performances amongst. Hence we do not include unsupervised or semi-supervised anomaly detection strategy [2] in our experiments and we believe it is not an equitable comparison between supervised and semi-supervised approaches. To the best our knowledge, the proposed work on {anomaly,benign} classification within large consumer electronics items, using sub-component level segmentation strategy, is first of its kind. As there is no prior related work is available on the literature of X-ray security imagery (e.g. sub-component level segmentation classification), we are unable to compare our strategies with any existing algorithm and present our results as the benchmark.

Figure 5 shows exemplar qualitative results of sub-component level segmentation with per superpixel classification using the fine-grained DFL [27] approach where we can see the colour coded set of anomalous (red) as well as benign (green) sub-component regions within the pre-isolated object-level image region.

We assess the performance impact of varying segmentation strategies, such as object level and sub-component level segmentation, for intra-object anomaly detection within the context of X-ray security imagery. Our experimental comparison demonstrates the superiority of a sub-component level segmentation approach in combination with a specific fine-grain CNN architecture achieving a performance accuracy of 97.91% with a notable 3.50% false positive rate for realistic anomaly concealment within representative consumer electronic items.