Identifiability is of fundamental importance in the statistical learning of dynamical systems of interacting particles. We prove that the interaction functions are identifiable for a class of first-order stochastic systems, including linear systems and a class of nonlinear systems with stationary distributions in the decentralized directions. We show that the identfiability is equivalent to strict positiveness of integral operators associated to integral kernels arisen from the nonparametric regression. We then prove the positiveness based on series representation of the integral kernels and a Müntz type theorem for the completeness of even polynomials. 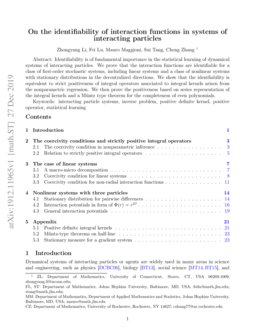 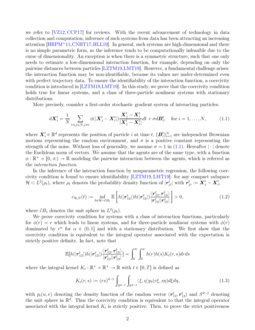 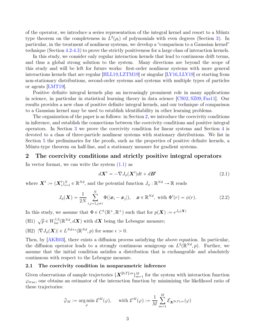 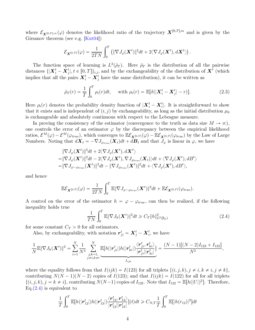 Dynamical systems of interacting particles or agents are widely used in many areas in science and engineering, such as physics [DCBC06], biology [BT13], social science [MT14, BT15], and we refer to [VZ12, CCP17] for reviews. With the recent advancement of technology in data collection and computation, inference of such systems from data has been attracting an increasing attention [HRPM+11, CNHT17, HLL19]

. In general, such systems are high-dimensional and there is no simple parametric form, so the inference tends to be computationally infeasible due to the curse of dimensionality. An exception is when there is a symmetric structure, such that one only needs to estimate a low-dimensional interaction function, for example, depending on only the pairwise distances between particles

[LZTM19, LMT19]. However, a fundamental challenge arises: the interaction function may be non-identifiable, because its values are under-determined even with perfect trajectory data. To ensure the identifiability of the interaction function, a coercivity condition is introduced in [LZTM19, LMT19]. In this study, we prove that the coercivity condition holds true for linear systems, and a class of three-particle nonlinear systems with stationary distributions.

where Xti∈Rd represents the position of particle i at time t, {Bti}Ni=1 are independent Brownian motions representing the random environment, and σ is a positive constant representing the strength of the noise. Without loss of generality, we assume σ=1 in (1.1). Hereafter |⋅|

denote the Euclidean norm of vectors. We assume that the agents are of the same type, with a function

ϕ:R+=[0,∞)→R modeling the pairwise interaction between the agents, which is referred as the interaction function.

In the inference of the interaction function by nonparametric regression, the following coercivity condition is found to ensure identifiability [LZTM19, LMT19]: for any compact subspace H⊂L2(ρt), where ρt

denotes the probability density function of

We prove coercivity condition for systems with a class of interaction functions, particularly for ϕ(r)=r which leads to linear systems, and for three-particle nonlinear systems with ϕ(r) dominated by rα for α∈(0,1] and with a stationary distribution. We first show that the coercivity condition is equivalent to the integral operator associated with the expectation is strictly positive definite. In fact, note that

with pt(u,v) denoting the density function of the random vector (rt12,rt13) and Sd−1 denoting the unit sphere in Rd. Thus the coercivity condition is equivalent to that the integral operator associated with the integral kernel Kt is strictly positive. Then, to prove the strict positiveness of the operator, we introduce a series representation of the integral kernel and resort to a Müntz type theorem on the completeness in L2(ρt) of polynomials with even degrees (Section 3). In particular, in the treatment of nonlinear systems, we develop a “comparison to a Gaussian kernel” technique (Section 4.2-4.3) to prove the strictly positiveness for a large class of interaction kernels.

In this study, we consider only regular interaction kernels that lead to continuous drift terms, and thus a global strong solution to the system. Many directions are beyond the scope of this study and will be left for future works: first-order nonlinear systems with more general interactions kernels that are regular [HLL19, LZTM19] or singular [LY16, LLY19] or starting from non-stationary distributions, second-order systems and systems with multiple types of particles or agents [LMT19].

Positive definite integral kernels play an increasingly prominent role in many applications in science, in particular in statistical learning theory in data science

[CS02, SZ09, Fas11]. Our results provides a new class of positive definite integral kernels, and our technique of comparison to a Gaussian kernel may be used to establish identifiability in other learning problems.

In vector format, we can write the system (1.1) as

Then, by [AKR03], there exists a diffusion process satisfying the above equation. In particular, the diffusion operator leads to a strongly continuous semigroup on L2(RNd,p). Further, we assume that the initial condition satisfies a distribution that is exchangeable and absolutely continuous with respect to the Lebesgue measure.

2.1 The coercivity condition in nonparametric inference

where EX[0,T],m(φ) denotes the likelihood ratio of the trajectory X[0,T],m and is given by the Girsanov theorem (see e.g. [Kut04])

Here ρt(r) denotes the probability density function of |Xti−Xti|. It is straightforward to show that it exists and is independent of (i,j) by exchangeability, as long as the initial distribution μ0 is exchangeable and absolutely continuous with respect to the Lebesgue measure.

In proving the consistency of the estimator (convergence to the truth as data size M→∞), one controls the error of an estimator φ by the discrepancy between the empirical likelihood ratios, EM(φ)−EM(φtrue), which converges to EEX[0,T](φ)−EEX[0,T](φtrue)

by the Law of Large Numbers. Noting that

dXt=−∇Jφtrue(Xt)dt+dBt and that Jφ is linear in φ, we have

A control on the error of the estimator h=φ−φtrue, can then be realized, if the following inequality holds true

for some constant CT>0 for all estimators.

Also, by exchangeability, with notation rtji=Xtj−Xti, we have

Since in practice the true interaction function and estimators are in a compact subspace H⊂L2(¯ρT), e.g. H=W1,∞loc(R+), the above inequality motivates the following coercivity condition, so as to ensure the convergence of the estimator.

The dynamical system (1.1) on [0,T] with initial condition X0 is said to satisfy the coercivity condition on a compact subspace H⊂L2(¯ρT), with ¯ρT defined in (2.3), if

The above coercivity condition involves the average-in-time density \widebarρT, which is difficult to track in general. It is more convenient to consider a single-time version.

The dynamical system (1.1) with initial condition X0 is said to satisfy the coercivity condition at time t on a compact subspace H⊂L2(ρt), where ρt is defined in (2.3), if

We show in this subsection that the coercivity condition is equivalent to the strictly positiveness of related integral operators on L2(\widebarρT) or L2(ρt).

Recall that a linear operator Q on a Hilbert space H is positive if ⟨Qf,f⟩≥0 for any f∈H. It is said to be strictly positive if it is positive and ⟨Qf,f⟩=0 implies that f=0.

The system (1.1) on [0,T] with initial condition X0 satisfies the coercivity condition if and only if the integral operator associated with the kernel

is strictly positive on L2(\widebarρT), where pt(u,v) denotes the probability density function of the random vector (rt12,rt13).

Note that for any h,g∈L2(\widebarρT),

Thus, \widebarQT is a symmetric bounded linear operator on L2(\widebarρT).

By definition, the coercivity condition is equivalent to that

for each compact subspace H⊂L2(\widebarρT).

Similarly, we have the following proposition for the coercivity condition at a single time.

The system (1.1) with initial condition X0 satisfies the coercivity conditions at time t if and only if the integral operator Qt on L2(ρt) associated with the kernel

The proof is similar to the proof of Proposition 2.3.

With these operators, we can revisit the question on the relation between the two types of coercivity conditions: whether it holds true on an interval if it holds true for each time in the interval. Equivalently, whether \widebarQT on L2(\widebarρT) in Proposition 2.3 is positive if Qt on L2(ρt) in Proposition 2.4 is positive for each time in [0,T]. Clearly, the question is subtle because these operators are defined on different spaces: L2(ρt) and L2(\widebarρT), and it requires additional constraints on ρt and \widebarρT, e.g. being equivalent. Instead of tackling operators on different spaces, we provide a firm answer to the question for slightly modified operators, all on the space L2(\widebarρT), in the following proposition.

Proof. Note that for any h∈L2(\widebarρT),

is continuous in t∈[0,T] since the diffusion operator of system (2.1) is a continuous semigroup. Also, since the operator ˜Qt is non-negative for all t and positive for some t, so is ⟨˜Qth,h⟩. Noting that

3 The case of linear systems

Consider first the simplest case ϕ(r)≡θr, or equivalently, Φ(r)=12θr2. The system (1.1) can be written as

where the matrix A∈RNd×Nd is given by (with Id

being the identity matrix on

It is straightforward to compute that A2=A, and that the matrix A

1 of multiplicity (N−1)d and eigenvalue 0 of multiplicity d. Note that the vector {x=c(v,v,⋯,v)} is a critical point of the deterministic system, for any constant c∈R and any vector v∈Rd.

By a macro-micro decomposition of the system as in [Mal03, CDP+18], the next lemma shows that the center of the particles moves like a Brownian motion, and the particles concentrates around the center with a Gaussian-like distribution.

(i) The solution Xt of Eq.(3.1) can be explicitly written as

is Gaussian and exchangeable with variance

Proof. Note first that vt:=1N∑Ni=1Xti=1N∑Ni=1(X0i+1Bti) follows from the equation

Next, note that Yt=Xt−Xtc=AXt and

where we used A2=A in the third equality. Therefore, (Yt) is an Ornstein-Uhlenbeck process

We can also directly integrate Eq.(3.1) and write

Now we are ready to prove the coercivity conditions. We begin with two technical lemmas. Here denote by cov(X,Y) the covariance of X and Y, with the convention that cov(X)=cov(X,X).

be exchangeable Gaussian random variables on

denote the joint distribution of

Proof. We first represent Kλ(r,s) in terms a series of polynomials. By exchangeability, the random vector (X−Y,X−Z) is centered Gaussian with covariance matrix λ(2IdIdId2Id), whose inverse is 13λ(2Id−Id−Id2Id). Thus, the joint distribution is pλ(u,v)=(2√3πλ)−de−13λ(|u|2+|v|2−⟨u,v⟩). Combining with the fact that

and the fact that

By Lemma 5.9, a variation of the Müntz Theorem, the space s<span