On the Identifiability of Finite Mixtures of Finite Product Measures 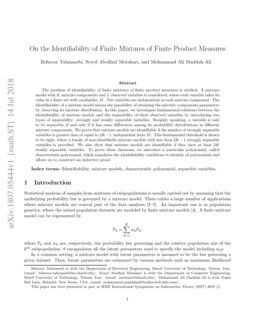 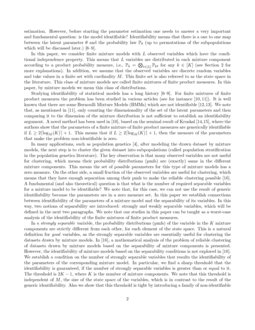 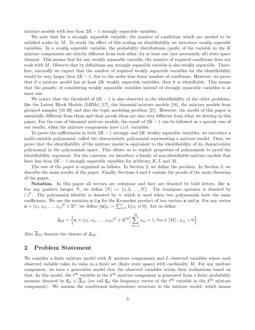 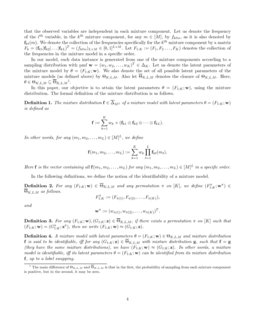 where Pk and wk are, respectively, the probability law governing and the relative population size of the kth subpopulation. θ encapsulates all the latent parameters used to specify the model including wks.

In a common setting, a mixture model with latent parameters is assumed to be the law governing a given dataset. Then, latent parameters are estimated by various methods such as maximum likelihood estimation. However, before starting the parameter estimation one needs to answer a very important and fundamental question: is the model identifiable? Identifiability means that there is a one to one map between the latent parameter

θ and the probability law Pθ (up to permutations of the subpopulations which will be discussed later.) [6, 7, 8, 9].

In this paper, we consider finite mixture models with L observed variables which have the conditional independence property. This means that L variables are distributed in each mixture component according to a product probability measure, i.e., Pk=⨂ℓ∈[L]Pkℓ for any k∈[K]

(see Section 2 for more explanations). In addition, we assume that the observed variables are discrete random variables and take values in a finite set with cardinality

M. This finite set is also refereed to as the state space in the literature. This class of mixture models are called finite mixtures of finite product measures. In this paper, by mixture models we mean this class of distributions.

Studying identifiability of statistical models has a long history [6, 7, 8, 9]. For finite mixtures of finite product measures the problem has been studied in various articles (see for instance [10, 11]). It is well known that there are some Bernoulli Mixture Models (BMMs) which are not identifiable [12, 13]. We note that, as mentioned in [11], only counting the dimensionality of the set of the latent parameters and then comparing it to the dimension of the mixture distribution is not sufficient to establish an identifiability argument. A novel method has been used in [10], based on the seminal result of Kruskal [14, 15], where the authors show that the parameters of a finite mixture of finite product measures are generically identifiable if L≥2⌈logM(K)⌉+1. This means that if L≥2⌈logM(K)⌉+1, then the measure of the parameters that make the problem non-identifiable is zero.

In many applications, such as population genetics [4], after modeling the drawn dataset by mixture models, the next step is to cluster the given dataset into subpopulations (called population stratification in the population genetics literature). The key observation is that many observed variables are not useful for clustering, which means their probability distributions (pmfs) are (exactly) same in the different mixture components. This means the set of possible parameters for this type of mixture models has a zero measure. On the other side, a small fraction of the observed variables are useful for clustering, which means that they have enough separation among their pmfs to make the reliable clustering possible [16]. A fundamental (and also theoretical) question is that what is the number of required separable variables for a mixture model to be identifiable? We note that, for this case, we can not use the result of generic identifiability because the parameters are in a zero measure set. In this paper we establish connections between identifiability of the parameters of a mixture model and the separability of its variables. In this way, two notions of separability are introduced: strongly and weakly separable variables, which will be defined in the next two paragraphs. We note that our studies in this paper can be taught as a worst-case analysis of the identifiability of the finite mixtures of finite product measures.

We notice that the threshold of 2K−1 is also observed in the identifiability of the other problems, like the Latent Block Models (LBMs) [17], the binomial mixture models [18], the mixture models from grouped samples [19, 20] and also the topic modeling problem [21]. However, the model of this paper is essentially different from them and their proofs ideas are also very different from what we develop in this paper. For the case of binomial mixture models, the result of 2K−1 can be followed as a special case of our results, when the mixture components have i.i.d. variables.

In this paper all vectors are columnar and they are denoted by bold letters, like

x. For any positive integer N, we define [N]:={1,2,…,N}. The transpose operator is denoted by (.)T. The polynomial identity is denoted by ≡ which is used when two polynomials have the same coefficients. We use the notation x⊗y for the Kronecker product of two vectors x and y. For any vector x=(x1,x2,…,xn)T∈Rn, we define ∥x∥0:=∑ni=11{xi≠0}. Let us define

In our model, each data instance is generated from one of the mixture components according to a sampling distribution with pmf w=(w1,w2,…,wK)T∈ΔK. Let us denote the latent parameters of the mixture model by θ=(F1:K;w). We also denote the set of all possible latent parameters of the mixture models (as defined above) by ΘK,L,M. Also let ¯¯¯¯ΘK,L,M denotes the closure of ΘK,L,M. Here, θ∈ΘK,L,M⊆¯¯¯¯ΘK,L,M111 The main difference of ΘK,L,M and ¯¯¯¯ΘK,L,M is that in the first, the probability of sampling from each mixture component is positive, but in the second, it may be zero..

The mixture distribution f∈¯¯¯¯¯ΔML of a mixture model with latent parameters θ=(F1:K;w) is defined as

In the following definitions, we define the notion of the identifiability of a mixture model.

In the next section, we analyze the problem of identifiability of the mixture models and its relation to the number of separable variables (strong or weak). In particular, we show that there is a sharp threshold on the number of separable variables (strongly or weak), that implies the identifiability of the corresponded mixture model.

The main result of this paper for the strongly separable variables is summarized in the following theorem.

For the proof of the theorem, first we introduce a multi-variable polynomial which is made up by the parameters of the problem. We show that the identifiability of a mixture model follows by the identifiability of its characteristic polynomial in the class of polynomials. Then, by exploiting the properties of the polynomials, we prove the sufficiency part of the theorem. For the necessary part, we introduce a family of non-identifiable mixture models that shows the necessity of the condition in the worst-case regime.

The result for the weakly separable variables is also provided in the next theorem.

(Sufficient condition for the identifiability based on the weakly separable variables) Any mixture model with latent variables θ=(F1:K;w)∈ΘK,L,M such that Lw(F1:K;w)≥2K is identifiable.

The theorem states that although the weakly separable variables satisfy order-wise less conditions, but to use them, it suffices to have just one extra variable, in comparison with the strong separability measure.

It is easy to see that in a more general model, if the observed variables have state spaces with (possibly) different sizes denoted by {Mℓ}ℓ∈[L], then the notion of weakly separable variables can be defined for them similarly and also the sufficiency of 2K weakly separable variables for the identifiability of them holds. For this matter, it just suffices to set M=maxℓ∈[L]Mℓ and then consider each observed variable as an instance with state apace of cardinality M, by setting M−Mℓ frequencies to be zero in the ℓth variable.

The proofs of the theorems are available in the next two sections.

4.1 Proof of the sufficiency part of Theorem 1 for M=2

In this part, we use the notation fkℓ instead of fkℓ1. Note that we have fkℓ1+fkℓ2=1 in the binary case. Also, we use ΘK,L and ¯¯¯¯ΘK,L instead of ΘK,L,2 and ¯¯¯¯ΘK,L,2, respectively. First we need to define the characteristic polynomial of the latent parameters.

The characteristic polynomial of latent parameters (F1:K;w)∈¯¯¯¯ΘK,L is an L-variable polynomial that is defined as follows.

We also denote the characteristic polynomials by C(F1:K;w)(x1:L) in a brief way.

For any (F1:K;w)∈ΘK,L, the following propositions are equivalent.

Now, we state the following theorem which concludes the proof of the sufficiency part of Theorem 1 for binary case.

Observe that the sufficiency part of Theorem 1 for binary state spaces follows by Theorem 3 and Lemma 1. Also, note that Theorem 3 establishes an identifiability argument for a class of multi-variable polynomials, named by characteristic polynomials.

To prove Theorem 3, we establish an stronger argument. We relax the condition w∈ΔK in the definition of ΘK,L to ∥w∥0=K and form a new set of latent parameters, denoted by Θ∗K,L. Note that we have ΘK,L⊆Θ∗K,L. Also ¯¯¯¯¯¯Θ∗K,L denotes the closure of Θ∗K,L. Now we prove the statement of the theorem, for the cases that (F1:K;w)∈Θ∗K,L and (G1:K;z)∈¯¯¯¯¯¯Θ∗K,L, which is stronger than the theorem333 Note that all of the prior definitions for (F1:K;w)∈ΘK,L naturally extend to the elements of Θ∗K,L. . The reason that we use this modification is that this allows us to establish an inductive proof.

Without loss of generality, assume that the variable ℓ=L is strongly separable in (F1:~K;w). Letting xL=f~KL in (1) results

Note that the term k=~K in LHS of (1) becomes zero by choosing xL=f~KL. Also notice that for any k∈[~K−1],f~KL≠fkL, because the variable ℓ=L is strongly separable. Now two cases may happen.

Case one. First assume that the RHS of the summation in (2) has less than ~K non-zero terms444 Note that the LHS of (2) contains ~K−1 terms, which means that the number of distinct non-zero polynomials in the summation is ~K−1. This is due to the strong separability of the the variable ℓ=1. , i.e., there is a k∈[~K], such that zk(f~KL−gkL)=0. Without loss of generality, assume that z~K(f~KL−g~KL)=0. In this case, we can use the induction hypothesis on the identity in (2). More precisely, since we have set z~K(f~KL−g~KL)=0, the identity (2) can be written as

We note that w′k≠0, since the variable ℓ=1 has been assumed to be strongly separable and wk≠0. Now we consider two sets of latent parameters corresponded to the two sides of (3). Observe that the number of strongly separable variables in the corresponding problem of the LHS of (3) is at least 2~K−2, which is greater than 2(~K−1)−1. This shows that we can use the induction hypothesis in this case.

By applying this fact to (4) and using the identity w′=z′, we conclude that that w~K=z~K. Hence, the term k=~K in the summation in (1) can be canceled from two sides. This yields that

4.2 Proof of the sufficiency part of Theorem 1 for M≥3

4.3 Proof of the necessary part of Theorem 1