On the Existence of the Augustin Mean

The existence of a unique Augustin mean and its invariance under the Augustin operator are established for arbitrary input distributions with finite Augustin information for channels with countably generated output σ-algebras. The existence is established by representing the conditional Rényi divergence as a lower semicontinuous and convex functional in an appropriately chosen uniformly convex space and then invoking the Banach–Saks property in conjunction with the lower semicontinuity and the convexity. A new family of operators is proposed to establish the invariance of the Augustin mean under the Augustin operator for orders greater than one. Some members of this new family strictly decrease the conditional Rényi divergence, when applied to the second argument of the divergence, unless the second argument is a fixed point of the Augustin operator. 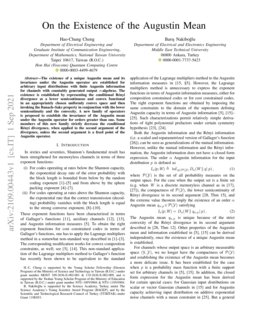 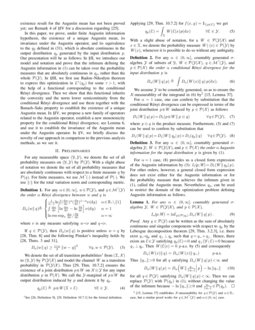 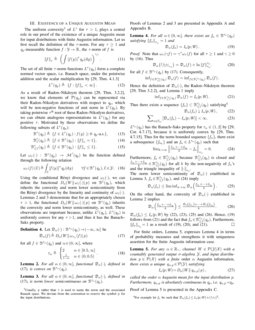 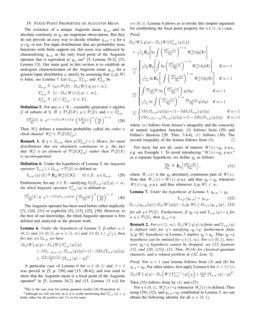 The Augustin Capacity and Center

The existence of a unique Augustin mean is established for any positive ...
Barış Nakiboğlu, et al. ∙

Fortin Operator for the Taylor-Hood Element

We design a Fortin operator for the lowest-order Taylor-Hood element in ...
Lars Diening, et al. ∙

In sixties and seventies, Shannon’s fundamental result has been strengthened for memoryless channels in terms of three exponent functions:

where P(Y) is the set of all probability measures on the output space. For the case when the output set is a finite set (e.g. when W is a discrete memoryless channel as in [17, 27]), the compactness of P(Y), the lower semicontinuity of Rényi divergence in its second argument [28, Thm 15], and the extreme value theorem imply the existence of an order α Augustin mean qα,p∈P(Y) satisfying

The Augustin mean qα,p is unique because of the strict convexity of the Rényi divergence in its second argument described in [28, Thm 12]. Other properties of the Augustin mean and information established in [5, 15] can be derived independently, once the existence of a unique Augustin mean is established.

For channels whose output space is an arbitrary measurable space (Y,Y), we no longer have the compactness of P(Y) and establishing the existence of the Augustin mean becomes a more delicate issue. It has been established for the case when p is a probability mass function with a finite support set for arbitrary channels in [5, 15]

. In addition, the closed form expression for the Augustin mean has been derived for certain special cases: for Gaussian input distributions on scalar or vector Gaussian channels in

[15] and for Augustin capacity achieving input distribution on additive exponential noise channels with a mean constraint in [25]. But a general existence result for the Augustin mean has not been proved yet; see Remark 4 of §IV for a discussion regarding [25].

In this paper, we prove, under finite Augustin information hypothesis, the existence of a unique Augustin mean, its invariance under the Augustin operator, and its equivalence to the q˜p defined in (31), which is absolute continuous in the output distribution qp generated by the input distribution p. Our presentation will be as follows: In §II, we introduce our model and notation and prove that the infimum defining the Augustin information in (1) can be taken over the probability measures that are absolutely continuous in qp, rather than the whole P(Y). In §III, we first use Radon–Nikodym theorem to express this optimization in Lτ(qp) for some τ>1, with the help of a functional corresponding to the conditional Rényi divergence. Then we show that this functional inherits the convexity and the norm lower semicontinuity from the conditional Rényi divergence and use them together with the Banach–Saks property to establish the existence of a unique Augustin mean. In §IV, we propose a new family of operators related to the Augustin operator, establish a new monotonicity property for the conditional Rényi divergence, see Lemma 6, and use it to establish the invariance of the Augustin mean under the Augustin operator. In §V, we briefly discuss the novelty of our approach in comparison to the previous analysis methods, as we see it.

ensures the existence of a joint distribution

With a slight abuse of notation, for a W∈P(Y|X) and x∈X, we denote the probability measure W(⋅|x)∈P(Y) by W(x), whenever it is possible to do so without any ambiguity.

For any α∈(0,∞], countably generated σ-algebra Y of subsets of Y, W∈P(Y|X), q∈M+(Y), and p∈P(X) the order α conditional Rényi divergence for the input distribution p is

For α=1 case, one can confirm by substitution that the conditional Rényi divergence can be expressed in terms of the joint distribution induced by p∈P(X) as follows

where p⊗q is the product measure. Furthermore, (5) and (7) can be used to confirm by substitution that

For any α∈(0,∞], countably generated σ-algebra Y, W∈P(Y|X), and p∈P(X) the order α Augustin information for the input distribution p is given by (1).

Any q∈P(Y) can be written as the sum of absolutely continuous and singular components with respect to qp by the Lebesgue decomposition theorem [29, Thm. 3.2.3], i.e. there exist q∼≺qp and q⊥⊥qp such that q=q∼+q⊥. Hence, there exists an E∈Y satisfying qp(E)=0 and q⊥(Y∖E)=0 because q⊥⊥qp. Then W(E|x)=0 p-a.s. by (5) and consequently

The uniform convexity333Usually, p rather than τ is used to name the norm and the associated Banach space. We deviate from the convention to reserve the symbol p for the input distributions. of Lτ for τ>1, plays a central role in our proof of the existence of a unique Augustin mean for input distributions with finite Augustin information. Let us first recall the definition of the τ-norm. For any τ≥1 and qp-measurable function f:Y→R, the τ-norm of f is

The set of all finite τ-norm functions Lτ(qp) form a complete normed vector space, i.e. Banach space, under the pointwise addition and the scalar multiplication by [29, Thm. 4.1.3]

As a result of Radon–Nikdoym theorem [29, Thm. 3.2.2], we know that elements of P(qp) can be represented via their Radon–Nikodym derivatives with respect to qp, which will be non-negative functions of unit norm in L1(qp). By taking pointwise τth root of these Radon–Nikodym derivatives, we can obtain analogous representations in Lτ(qp) for any positive τ. Motivated by these observations we define the following subsets of Lτ(qp):

Let ωτ(⋅):Bτ(qp)→M+(qp) be the function defined through the following relation

Using the conditional Rényi divergence and ω1(⋅), we can define the functional Dα(W∥ω1(⋅)|p) on B1(qp), which inherits the convexity and norm lower semicontinuity from the Rényi divergence by the linearity and continuity of ω1(⋅). Lemmas 2 and 3 demonstrate that for an appropriately chosen τ>1, the functional Dα(W∥ωτ(⋅)|p) on Bτ(qp) inherits the convexity and norm lower semicontinuity, as well. These observations are important because, unlike L1(qp), Lτ(qp) is uniformly convex for any τ>1, and thus it has the Banach–Saks property.

Proofs of Lemmas 2 and 3 are presented in Appendix -A and Appendix -B.

Furthermore, fα∈Bτα≤1(qp) because Bτα≤1(qp) is closed and fn1+⋯+fnkk∈Bτα≤1(qp) for all k by the non-negativity of fn’s and the triangle inequality of ∥⋅∥τα.

On the other hand, the convexity of Dα(⋅) established in Lemma 2 implies

For finite orders, Lemma 5, expresses Lemma 4 in terms of probability measures and strengthens it with uniqueness assertion for the finite Augustin information case.

For any α∈R+, channel W∈P(Y|X) with a countably generated output σ-algebra Y, and input distribution p∈P(X) with a finite order α Augustin information, there exists a unique qα,p∈P(Y) satisfying

Proof of Lemma 5 is presented in the Appendix -C.

The existence of a unique Augustin mean qα,p and its absolute continuity in qp are important observations. But they do not provide an easy way to decide whether qα,p=q for a q≺qp or not. For input distributions that are probability mass functions with finite support set, this issue was addressed by characterizing qα,p as the only fixed point of the Augustin operator that is equivalent to qp, see555This is the case even for certain quantum models [30, Proposition 4]. [5, Lemma 34.2], [15, Lemma 13]. Our main goal in this section is to establish an analogous characterization of the Augustin mean qα,p for a general input distribution p merely by assuming that Iα(p;W) is finite, see Lemma 7. Let Qα,p, Xqα,p, and Xqα,p be

If q∈Qα,p, then p(Xqα,p)=1. Hence, for input distributions that are absolutely continuous in p, the fact that Wqα is an element of P(Y|Xqα,p) rather than P(Y|X) is inconsequential.

Under the hypothesis of Lemma 5, the Augustin operator Tα,p(⋅):Qα,p→P(Y) is defined as