On the equivalence between multiclass PS-type scheduling policies

Consider a single server queue serving a multiclass population. Some popular scheduling policies for such a system (and of interest in this paper) are the discriminatory processor sharing (DPS), discriminatory random order service (DROS), generalized processor sharing (GPS) and weighted fair queueing (WFQ). The aim of this paper is to show a certain equivalence between these scheduling policies for the special case when the multiclass population have identical and exponential service requirements. In fact, we show the equivalence between two broader classes of policies that generalize the above mentioned four policies. We specifically show that the sojourn time distribution for a customer of a particular class in a system with the DPS (GPS) scheduling policy is a constant multiple of the waiting time distribution of a customer of the same class in a system with the DROS (respectively WFQ) policy. 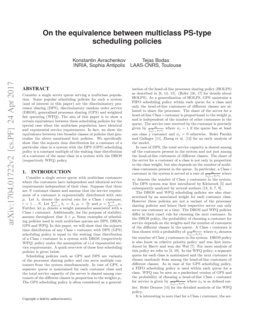 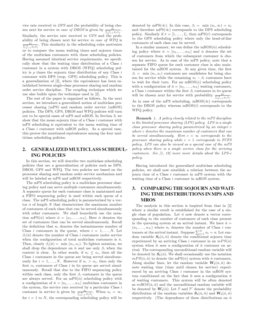 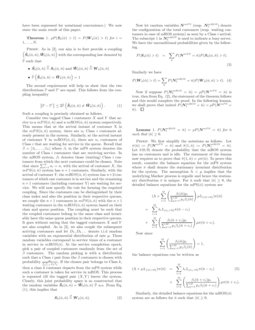 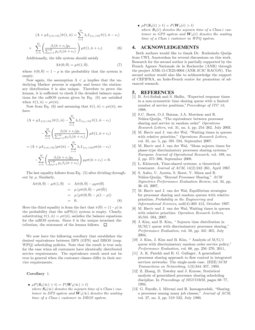 Consider a single server system with multiclass customers. Some commonly used scheduling policies in such multiclass system are DPS, DROS, GPS and WFQ. A quick overview of these policies is as follows. Policies like GPS and DPS are variants of the processor sharing policy where the server can serve multiple customers from the system simultaneously. In case of GPS, a separate queue is maintained for each customer class and the total service capacity of the server is shared among customers of the different classes in proportion to predefined weights pi. The GPS scheduling policy is often considered as a generalization of the head-of-line processor sharing policy (HOLPS) as described in [Aalto07, Demers90, KMK]. (Refer [Fayolle79, Morrison93] for details about HOLPS). As a generalization of HOLPS, GPS maintains a FIFO scheduling policy within the queue of each class and only the head-of-line customers of different classes are allowed to share the processor. The share of the server for a head-of-line Class i customer is proportional to the weight pi and is independent of the number of other customers in the queue. The service rate received by the customer is precisely given by pi∑Nj=1pjϕj where ϕj=1 if the queue has at least one class j customer and ϕj=0 otherwise. Refer Parekh and Gallager [Parekh93], Zhang et al. [Zhang94] for an early analysis of the model.

In case of DPS, the total service capacity is shared among all the customers present in the system and not just among the head-of-line customers of different classes. The share of the server for a customer of a class is not only in proportion to the class weight, but also depends on the number of multiclass customers present in the queue. In particular, a Class i customer in the system is served at a rate of pi∑Nj=1pjnj where nj denotes the number of Class j customers in the system. The DPS system was first introduced by Kleinrock [Kleinrock67-2] and subsequently analyzed by several authors [Aetal05, Fayolle80, Haviv07-2, Haviv97, Kim04]. See [AAA06] for a survey of various results on DPS.

The DROS and WFQ scheduling policies are also characterized by an associated weight for each customer class. However these policies are not a variant of the processor sharing policies and hence their respective server can only serve one customer at a time. The DROS and WFQ policies differ in their exact rule for choosing the next customer. In the DROS policy, the probability of choosing a customer for service depends on the weights and the number of customers of the different classes in the queue. A Class

i customer is thus chosen with a probability of pi∑Nj=1pjnj where nj denotes the number of Class j customers waiting in the system for service. DROS policy is also know as relative priority policy and was first introduced by Haviv and wan der Wal [Haviv97]. For more analysis of this policy we refer to [Haviv07, Kim11]. In the WFQ policy, a separate queue for each class is maintained and the next customer is chosen randomly from among the head-of-line customers of different classes. As in case of the GPS scheduling policy, a FIFO scheduling policy is used within each queue for a class. WFQ can be seen as a packetised version of GPS and the probability of choosing a head-of-line Class i customer for service is given by pi∑Nj=1pjϕj where ϕj is as defined earlier. Refer Demers [Demers90] for the detailed analysis of the WFQ policy.

Organization: In the next section, we introduce a generalized notion of multiclass processor sharing (MPS) and random order service (MROS) policies. The DPS, GPS, DROS and WFQ policies will turn out to be special cases of MPS and MROS. In Section 3, we show that the tail of the sojourn time distribution of a Class i customer with MPS scheduling is equivalent to the tail of the waiting time distribution of a Class i customer with MROS policy. As a special case, this proves the mentioned equivalences among the four multiclass scheduling policies.

μ. Thus the service requirements are independent of their class. We also assume that customers from different classes arrive according to independent Poisson processes. For the purpose of stability, we assume that Λ<μ.

In this section, we will describe two multiclass scheduling policies that are a generalization of policies such as DPS, DROS, GPS and WFQ. The two policies are based on the processor sharing and random order service mechanism and will be labeled as MPS and MROS respectively.

¯α=(α1,…,αN) that characterizes the maximum permisible number of customers of each class that can be served simultaneously with other customers. We shall henceforth use the notation MPS(¯α) when we talk about an MPS policy with parameter ¯α. Let ni denote the instantaneous number of Class i customers in the queue and ¯n:=(n1,…,nN) denotes the corresponding state in the MPS system. Let βi(¯n) denote the number of Class i customers under service when the state of the MPS system is ¯n. Then, clearly βi(¯n)=~{}min~{}(ni,αi). In other words, if ni≤αi, then all the Class i customers present in the queue are being served simultaneously for i=1,…,N. However if ni>αi, then only the first αi customers of Class i in its queue are served simultaneously. It should be noted that due to the FIFO policy within each queue of a class, only the first βi(¯n) customers in the queue are served at any time. To lighten some of the notation, we shall drop the dependence on ¯n and use only βi when the context is clear. For an MPS(¯α) scheduling policy in state ¯n, the service rate received by a particular Class i customer which is in service is given by pi∑Nj=1pjβj. When αi=∞, for i=1~{}to~{}N, the corresponding scheduling policy will be denoted by MPS(¯∞). In this case, βi=~{}min~{}(ni,∞)=ni and therefore MPS(¯∞) corresponds to the DPS scheduling policy. Similarly if ¯e=(1,…,1), then MPS(¯e) corresponds to the GPS scheduling policy where only the head-of-line customers of each class can be served.

In a similar manner, we can define the MROS(¯α) scheduling policy where ¯α=(α1,…,αN) denotes the vector of multiclass customers from which the subsequent customer is chosen for service. As in case of the MPS policy, note that a separate FIFO queue for each customer class is also maintained for the MROS system. At any given time, the first βi=~{}min~{}(ni,αi) customers are candidates for being chosen for service while the remaining ni−βi customers have to wait for their turn. Note that the state ¯n for an MROS(¯α) scheduling policy denotes the vector of waiting multiclass customers present in the system. In the MROS(¯α) system, a Class i customer within the first βi customers in its queue will be chosen next for service with probability pi∑Nj=1pjβj. As in case of the MPS scheduling, MROS(¯∞) corresponds to the DROS policy whereas MROS(¯e) corresponds to the WFQ policy.

The analysis in this section is inspired from that in [Borst03] where a similar result is established for the case of a single class of population. For a given state of ¯n=(n1,…,nN), define n:=∑Ni=1ni.

denote the probability distribution of the random variables

Si(¯α,¯n) and Wi(¯α,¯n) respectively. (The dependence of these distributions on ¯n have been suppressed for notational convenience.) We now state the main result of this paper.

Such a coupling is precisely obtained as follows.

At the service completion epoch, pick a pair of coupled customers randomly. This random picking is with a distribution such that the chosen pair is of Class

i with probability pi∑Nj=1pjβj. When the randomly chosen pair is of Class i, a class i customer departs from the MPS system while such a customer is taken for service in the MROS system. This process is repeated till the tagged pair (X,Y) leaves the system. Clearly, this joint probability space is so constructed that the random variables ^Si(¯α,¯n)=^Wi(¯α,¯n) ^P–a.s. From Eq. (1), this implies that

We first simplify the notations as follows. Let π(¯n):=P(NMPS=¯n) and ^π(1,¯n):=P(NMROS1=¯n). Let ^π(0,¯0) denote the probability that the MROS system has no customers and is idle. The statement of the lemma now requires us to prove that ^π(1,¯n)=ρπ(¯n). To prove this result, consider the balance equation for the MPS system where π shall denote the stationary invariant distribution for the system. The assumption Λ<μ implies that the underlying Markov process is ergodic and hence the stationary distribution π is unique. For ¯n such that |¯n|≥0, the global balance equations for the MPS(¯α) system are

Similarly, the global balance equations for the MROS(¯α) system are as follows for ¯n such that |¯n|≥0.

Additionally, the idle system should satisfy

where ^π(0,¯0)=1−ρ is the probability that the system is empty. Now again, the assumption Λ<μ implies that the underlying Markov process is ergodic and hence the stationary distribution ^π is also unique. Therefore to prove the lemma, it is sufficient to check if the global balance equations for the MROS system given by Eq. (6) are satisfied when ^π(1,¯n)=ρπ(¯n).

The last equality follows from Eq. (3) after dividing throughout by ρ. Similarly,

Here the third equality is from the fact that π(¯0)=(1−ρ) is the probability that the MPS(¯α) system is empty. Clearly, substituting ^π(1,¯n)=ρπ(¯n), satisfies the balance equations for the MROS system. Since ^π is the unique invariant distribution, the statement of the lemma follows.