The Fisher-Snedecor F distribution has been recently proposed as a more accurate and mathematically tractable composite fading model than traditional established models in some practical cases. In this paper, we firstly derive exact closed-form expressions for the main statistical characterizations of the ratio of products of F-distributed random variables, including the probability density function, the cumulative distribution function and the moment generating function. Secondly, simple and tight approximations to the distribution of products and ratio of products of F-distributed random variables are presented. These analytical results can be readily employed to evaluate the performance of several emerging system configurations, including full-duplex relaying systems operating in the presence of co-channel interference and wireless communication systems enhanced with physical-layer security. The proposed mathematical analysis is substantiated by numerically evaluated results, accompanied by equivalent ones obtained using Monte Carlo simulations. 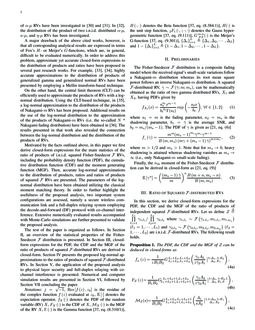 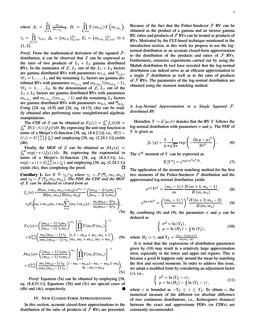 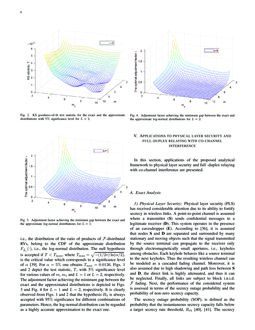 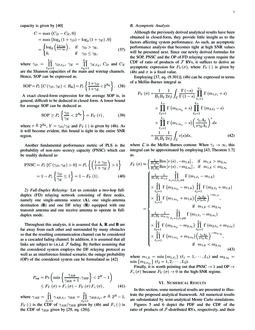 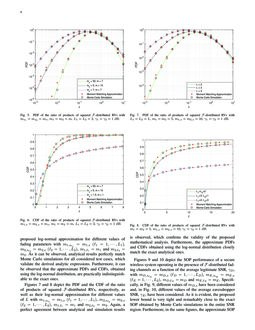 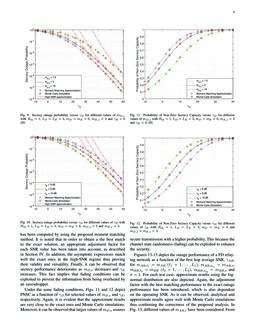 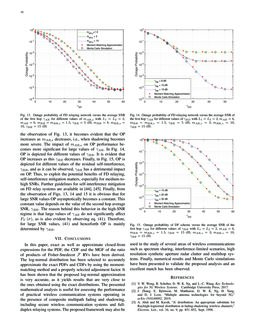 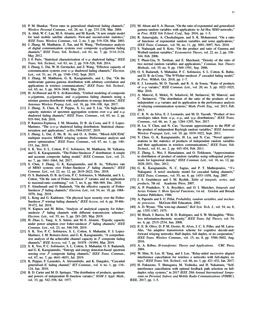 The performance of wireless communication systems is hampered by several factors, including multipath fading and shadowing. As such, accurate channel modeling of such phenomena is crucial for purposes of accurate performance analysis and design of wireless communications [1, 2]. In order to describe the statistics of the joint effect of multipath fading and simultaneous shadowing, various composite multipath/shadowing fading distributions have been proposed in the past decades, including the K [3] and the generalized-K distributions [4].

Recently, several generalized composite distributions have been presented in the open technical literatures which can better model the statistics of the mobile radio signal, such as the gamma shadowed Rician, κ-μ, η-μ, α-μ and α-κ-μ distributions [5, 6, 7, 8, 9, 10, 11, 12, 13]. Although these composite models can adequately characterize the incurred mobile signal fading phenomena, their mathematical representation is rather cumbersome or even intractable. The Fisher-Snedecor F distribution has been recently introduced as a mathematically tractable fading model that well describes the combined effects of multipath fading and shadowing, especially in the deep fading case [14]. This distribution can be reduced to some common fading models in some special parameter settings, such as Nakagami-m and Rayleigh fading channels. Furthermore, the F distribution can provide a better fit to experimental data obtained at device-to-device (D2D) communications with respect to the well established generalized-K distribution with lower computational complexity [14]. Because of its interesting properties, the performance analysis of digital wireless communication systems over F distributed channels has been analyzed in several recent research works, e.g. see [15, 16, 17, 18, 19, 20, 21, 22] and references therein.

On the other hand, for the performance analysis in many practical wireless applications, the statistics of the ratios and products of fading RVs is of significant importance. For example, the performance analysis of wireless communications systems operating in the presence of co-channel interference commonly involves the evaluation of the statistics of the ratio of signals’ powers, i.e., the signal-to-interference ratio (SIR). Moreover, the distribution of products of random variables is useful for the performance evaluation of multi-antenna systems operating in the presence of keyholes or relaying systems with non-regenerative relays [23].

The statistics of the ratio and products of fading random variables (RVs) have been extensively studied in several past research works. For example, a very generic analytical framework for the evaluation of the statistics of products and ratios of arbitrarily distributed RVs using the so-called H-function technique has first been proposed in [24]. The H-function distribution is a very generic statistical model that includes as special cases several well-known distributions, such as the gamma, the exponential, the Weibull and the generalized gamma (α-μ) distribution. Several results on the distribution of the ratio of gamma, exponential, Weibull, and normal RVs have been derived in [25, 26, 27, 28]. In a recent work [29], the so-called N∗ Fisher-Snedecor F distribution, obtained as the products of N statistically independent but not necessarily identically distributed (i.n.i.d.) F-distributed RVs, has been introduced. The statistical properties of the ratio of products of α-μ RVs have been investigated in [30] and [31]. In [32], the distribution of the product of two i.n.i.d. distributed α-μ, κ-μ, and η-μ RVs has been investigated.

A major drawback of the above cited works, however, is that all corresponding analytical results are expressed in terms of Fox’s H- or Meijer’s G-functions, which are, in general, difficult to be evaluated numerically. In order to address this problem, approximate yet accurate closed-form expressions to the distribution of products and ratios have been proposed in several past research works. For example, [33, 34], highly accurate approximations to the distribution of products of generalized gamma and generalized normal RVs have been presented by employing a Mellin transform-based technique.

On the other hand, the central limit theorem (CLT) can be efficiently used to approximate the products of RVs with a log-normal distribution. Using the CLT-based technique, in

Motivated by the facts outlined above, in this paper we first derive closed-form expressions for the main statistics of the ratio of products of i.n.i.d. squared Fisher-Snedecor F RVs, including the probability density function (PDF), the cumulative distribution function (CDF) and the moment generating function (MGF). Then, accurate log-normal approximations to the distribution of products, ratios and ratios of products of squared F RVs are presented. The parameters of the log-normal distribution have been obtained utilizing the classical moment matching theory. In order to further highlight the usefulness of the proposed analysis, two important system configurations are assessed, namely a secure wireless communication link and a full-duplex relaying system employing the decode-and-forward (DF) protocol with co-channel interference. Extensive numerically evaluated results accompanied with Monte-Carlo simulations are further presented to validate the proposed analysis.

The rest of the paper is organized as follows. In Section II, an overview of the statistical properties of the Fisher-Snedecor F distribution is presented. In Section III, closed-form expressions for the PDF, the CDF and the MGF of the ratio of products of squared F-distributed RVs are derived in closed-form. Section IV presents the proposed log-normal approximations to the ratios of products of squared F-distributed RVs. In Section V, the application of the proposed analysis to physical layer security and full-duplex relaying with co-channel interference is presented. Numerical and computer simulation results are presented in Section VI, followed by Section VII concluding the paper.

, can be mathematically obtained as the ratio of two gamma distributed RVs,

X1 and X2, having PDFs given by

where m>1/2 and ms>1. Note that for ms→0, heavy shadowing is attained whereas shadowing vanishes as ms→∞ (i.e., only Nakagami-m small-scale fading).

Finally, the nth moment of the Fisher-Snedecor F distribution can be derived in closed-form as [21, eq. (9)]

The PDF, the CDF and the MGF of Z can be deduced in closed-forms as

Hereafter, Y∼L(μ,σ) denotes that the RV Y follows the log-normal distribution with parameters σ and μ. The PDF of Y is given as

The nth moment of Y can be expressed as

It is noted that the expressions of distribution parameters given by (10) may result in a relatively large approximation error, especially in the lower and upper tail regions. This is because a good fit happens only around the mean by matching the first and second moments. In order to address this issue, we adopt a modified form by considering an adjustment factor (ε), i.e.,

where ε is bounded as −Yf≤ε≤Yf. To obtain ε, the numerical measure of the different (or absolute difference of two continuous distributions, i.e., Kolmogorov distance) between the exact and approximate PDFs (or CDFs) are commonly recommended.

In what follows, we propose to use the log-normal distribution as an accurate approximation to the statistics of the product of two F-distributed RVs. Let Z=XY, where X∼F(¯γx;mx;ms,x) and Y∼F(¯γy;my;ms,y). The first and second moments of Z is given by

respectively. Matching the first and second moments of Z yields the following system of equations

The adjusted forms of (16) can be written as

Note that the expressions in (18) can be extended to the products of N independent F-distributed RVs as (16), where

The parameter εi can be computed in a similar manner as the one proposed in Section IV-A.

Finally, assuming independent and identically (i.i.d.) factors with mx=my=m, ms,x=ms,y=ms and ¯¯¯γx=¯¯¯γy=¯¯¯γ, the above expressions simplify to

Hereafter, we use the moment matching method to approximate the statistics of the ratio Z=X/Y, where X∼F(¯γx;mx;ms,x) and Y∼F(¯γy;my;ms,y), with a log-normal distribution. The first and second moments of Z, can be expressed as

After considering the adjustment factor ε, eq. (25) can be rewritten as

The adjustment factor ε can be obtained as before.

The application of the moment matching method yields

The above equations can be written as

The adjusted forms of (32) can be deduced as

The accuracy of the proposed approximations can be measured by using the Kolmogorov-Smirnov (KS) goodness-of-fit statistical test [39]. The KS test is defined as the largest absolute difference between the two cumulative distribution functions. Mathematically speaking, the KS test is expressed as