We present some new results on the joint distribution of an arbitrary subset of the ordered eigenvalues of complex Wishart, double Wishart, and Gaussian hermitian random matrices of finite dimensions, using a tensor pseudo-determinant operator. Specifically, we derive compact expressions for the joint probability distribution function of the eigenvalues and the expectation of functions of the eigenvalues, including joint moments, for the case of both ordered and unordered eigenvalues. 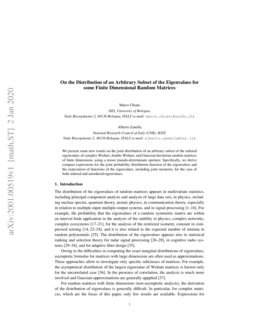 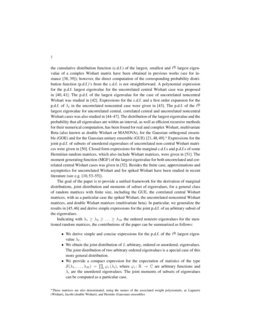 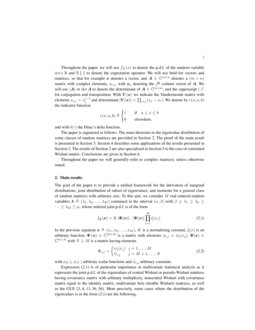 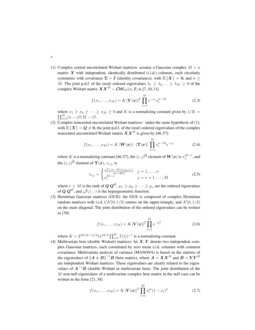 It is known that the generating function f of a sequence of Toeplitz mat...
Sven-Erik Ekström, et al. ∙

Sampling the eigenvalues of random orthogonal and unitary matrices

We develop an efficient algorithm for sampling the eigenvalues of random...
Massimiliano Fasi, et al. ∙

The distribution of the eigenvalues of random matrices appears in multivariate statistics, including principal component analysis and analysis of large data sets, in physics, including nuclear spectra, quantum theory, atomic physics, in communication theory, especially in relation to multiple-input multiple-output systems, and in signal processing

Owing to the difficulties in computing the exact marginal distributions of eigenvalues, asymptotic formulas for matrices with large dimensions are often used as approximations. These approaches allow to investigate only specific subclasses of matrices. For example, the asymptotical distribution of the largest eigenvalue of Wishart matrices is known only for the uncorrelated case [36]. In the presence of correlation, the analysis is much more involved and Gaussian approximations are generally appplied [37].

For random matrices with finite dimensions (non-asymptotic analysis), the derivation of the distribution of eigenvalues is generally difficult. In particular, for complex matrices, which are the focus of this paper, only few results are available. Expressions for the

The goal of the paper is to provide a unified framework for the derivation of marginal distributions, joint distribution and moments of subset of eigenvalues, for a general class of random matrices with finite size, including the GUE, the correlated central Wishart matrices, with as a particular case the spiked Wishart, the uncorrelated noncentral Wishart matrices, and double Wishart matrices (multivariate beta). In particular, we generalize the results in [46, 45] and derive simple expressions for the joint p.d.f. of an arbitrary subset of the eigenvalues.

Indicating with λ1≥λ2≥…≥λM the ordered nonzero eigenvalues for the mentioned random matrices, the contributions of the paper can be summarized as follows:

Throughout the paper, we will use fX(x) to denote the p.d.f. of the random variable (r.v.) X and E{⋅} to denote the expectation operator. We will use bold for vectors and matrices, so that for example x denotes a vector, and A∈Cm×n denotes a (m×n) matrix with complex elements, ai,j, with aj denoting the jth––– column vector of A. We will use |A| or detA to denote the determinant of A∈Cm×m, and the superscript (⋅)† for conjugation and transposition. With V(x) we indicate the Vandermonde matrix with elements vi,j=xi−1j and determinant |V(x)|=∏i<j(xj−xi). We denote by r(x;a,b) the indicator function

and with δ(⋅) the Dirac’s delta function.

Throughout the paper we will generally refer to complex matrices, unless otherwise stated.

The goal of the paper is to provide a unified framework for the derivation of marginal distributions, joint distribution of subset of eigenvalues, and moments for a general class of random matrices with arbitrary size. To this aim, we consider M real ordered random variables λ≜(λ1,λ2,…,λM) contained in the interval (α,β) with β≥λ1≥λ2≥⋯≥λM≥α, whose ordered joint p.d.f. is of the form

In the previous equation x≜(x1,x2,…,xM), K is a normalizing constant, ξ(x) is an arbitrary function, Φ(x)∈CM×M is a matrix with elements ϕi,j=ϕi(xj), Ψ(x)∈CN×N with N≥M is a matrix having elements

Expression (1) is of particular importance in multivariate statistical analysis as it represents the joint p.d.f.

In Theorem 2 we first generalise the result [11, Th. 2] to cover the case of matrices having different sizes.

The main result of the paper is then Theorem 2, which gives the marginal joint distribution of L arbitrary ordered r.v.s.

where the sums are over all possible permutations, μ and α, of the integers 1,…,N. It is worth noting that T(A) can be simplified as

where the (i,j)th––– element of the matrix A(μ) is aμi,j,i. Therefore, the computational complexity of the pseudo-determinant operator is equivalent to that of N! conventional determinant operators. In particular, if the matrix A(μ) remains the same for some permutations μ, the computational complexity of the operator T(A) can be strongly reduced. As a special case, when ai,j,k are independent of k, i.e., ai,j,k=ai,j,1, we have

Using the above definition, we have the following theorem, which represents the generalization of [11, Th. 2] when the integrand function is composed by the product of the determinants of two matrices having different sizes.

Given M arbitrary functions ξi(⋅) and two arbitrary matrices Φ(x)∈CM×M, with (i,j) elements Φi(xj), and Ψ(x)∈CN×N, N≥M, with elements as in (2), the following identity holds:

where the multiple integral is over the hypercube

dx=dx1dx2⋯dxM and the elements of the tensor C are

Since the integrand function in (11) does not depend on the specific values of the matrices but only on their determinants, Φ(x) in (11) can be replaced by an arbitrary matrix, say ^Φ(x), having the same determinant. A possible choice for the elements of ^Φ(x)∈CN×N is the following

Applying the definition (13), the integral in the left-hand side (LHS) of (11) becomes

The function ηk(x) in the previous equation is

The previous expression can be rewritten as

Now, due to the symmetry of the function in (1) we can also write

where c(ℓ) is defined in (19). To be able to use the T(⋅) operator we must integrate f(λ) with respect to all variables (this is hypercubical integration domain). To this aim, we use the indicator function r(x;a,b) defined in the introduction, that, together with the Dirac’s delta function δ(.), allows us to write

the N×N×N tensor A has elements

and ςi is defined in (21). For the proof we proceed as for Lemma 3 and obtain

For the proof of the general case of Theorem 2, that is, the marginal joint distribution of L arbitrary ordered eigenvalues, we follow the same approach used for the two previous Lemmas, generalizing (3) to the case of L variables kept fixed and integrating over the remaining M−L ones. In this way we obtain (15), (16), and (17)

4.1 Expected value of a function of the ℓth––– ordered eigenvalue

and aμk,αk,k(xℓ) are defined in (20). By direct substitution. By specializing the previous result to φ(x)=xm we obtain the moments of the distribution of an arbitrary ordered eigenvalue, with φ(x)=r(x;0,λℓ) we obtain the c.d.f., and with φ(x)=eνx we get the moment generating function (m.g.f.) of λℓ.

Note also that in many cases the evaluation of (32) does not require multidimensional numerical integration. For example, as shown by (49), for Wishart matrices the functions ai,j,k(xℓ) can be written in closed form.

4.2 Probability that all eigenvalues are within the interval [a,b]

The probability that all eigenvalues are within the interval [a,b] is given by

where the N×N×N tensor A has elements

For the proof we note that

Then, by applying Theorem 2 we get (33). As a special case, if Ψ(x)∈CM×M with Ψi,j=Ψi(xj),222This is the case, for instance, of the joint p.d.f. of the eigenvalues of central Wishart matrices the probability that all eigenvalues are within the interval [a,b] becomes

The joint p.d.f. of L arbitrary unordered eigenvalues λ1,λ2,…,λL (note that due to symmetry we can always assume the first L without loss in generality) is given by

where the N×N×N tensor A has elements

For the proof we proceed similarly to the previous cases. Note that some results for the unordered case can be also found in [58].

where the N×N×N tensor A has elements:

Immediate by Theorem 2. Special cases include the joint moments for unordered eigenvalues:

obtained with φℓ(λℓ)=λmℓℓ (by setting mℓ=0 for some ℓ we obtain the joint moments of the marginal eigenvalues).

The joint m.g.f. can be written as

which can be obtained from (41) with φℓ(λℓ)=eνℓλℓ.

As previously observed, the expression for the joint p.d.f. of the eigenvalues of complex central Wishart matrices has the same form as in (1). To apply the results of Sections 2 and 4 to the cases of Wishart and pseudo-Wishart matrices, the following Lemma can be used [56].

Denoting by X a complex Gaussian (p×n)random matrix with zero mean, unit variance, i.i.d. entries and by Σ an (n×n) positive definite matrix, the joint p.d.f. of the (real) nonzero ordered eigenvalues λ1≥λ2≥…≥λM≥0, with M=min(n,p), of the (p×p) quadratic form W=XΣX† is

where ξ(x)=xp−M, V(x) is the (M×M) Vandermonde matrix with elements vi,j=xi−1j. The constant K is given by

It can be checked that the uncorrelated case (3) is the special case of (45) for Σ=I.