On the digital homology groups of digital images 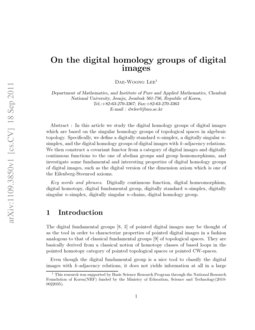 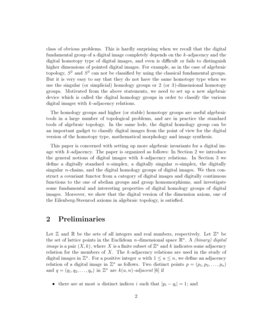 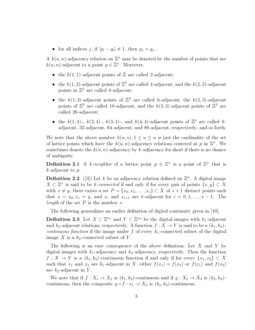 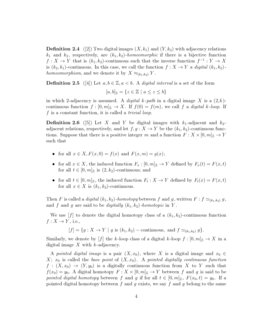 The digital fundamental groups [KO, LB1] of pointed digital images may be thought of as the tool in order to characterize properties of pointed digital images in a fashion analogous to that of classical fundamental groups [M] of topological spaces. They are basically derived from a classical notion of homotopy classes of based loops in the pointed homotopy category of pointed topological spaces or pointed CW-spaces.

k-adjacency relations, it does not yields information at all in a large class of obvious problems. This is hardly surprising when we recall that the digital fundamental group of a digital image completely depends on the k-adjacency and the digital homotopy type of digital images, and even is difficult or fails to distinguish higher dimensions of pointed digital images. For example, as in the case of algebraic topology, S2 and S3 can not be classified by using the classical fundamental groups. But it is very easy to say that they do not have the same homotopy type when we use the singular (or simplicial) homology groups or 2 (or 3)-dimensional homotopy groups. Motivated from the above statements, we need to set up a new algebraic device which is called the digital homology groups in order to classify the various digital images with k-adjacency relations.

The homology groups and higher (or stable) homotopy groups are useful algebraic tools in a large number of topological problems, and are in practice the standard tools of algebraic topology. In the same lode, the digital homology group can be an important gadget to classify digital images from the point of view for the digital version of the homotopy type, mathematical morphology and image synthesis.

Let Z and R be the sets of all integers and real numbers, respectively. Let Zn be the set of lattice points in the Euclidean n-dimensional space Rn. A (binary) digital image is a pair (X,k), where X is a finite subset of Zn and k indicates some adjacency relation for the members of X. The k-adjacency relations are used in the study of digital images in Zn. For a positive integer u with 1≤u≤n, we define an adjacency relation of a digital image in Zn as follows. Two distinct points p=(p1,p2,…,pn) and q=(q1,q2,…,qn) in Zn are k(u,n)-adjacent [BK] if

A k-neighbor of a lattice point p∈Zn is a point of Zn that is k-adjacent to p.

The following generalizes an earlier definition of digital continuity given in [R].

The following is an easy consequence of the above definition: Let X and Y be digital images with k1-adjacency and k2-adjacency, respectively. Then the function f:X→Y is a (k1,k2)-continuous function if and only if for every {x1,x2}⊂X such that x1 and x2 are k1-adjacent in X, either f(x1)=f(x2) or f(x1) and f(x2) are k2-adjacent in Y.

([LB3]) Let X and Y be digital images with k1-adjacent and k2-adjacent relations, respectively, and let f,g:X→Y be the (k1,k2)-continuous functions. Suppose that there is a positive integer m and a function F:X×[0,m]Z→Y such that

Similarly, we denote by [f] the k-loop class of a digital k-loop f:[0,m]Z→X in a digital image X with k-adjacency.

The following result shows that the ‘∗’ product operation of digital loop classes is well-defined.

We now describe the notion of trivial extension [BK] which is used to allow a loop to stretch and remain in the same pointed homotopy class.

Two digital loops f and g with the same base point x0∈X belong to the same digital loop class [f] (see [LB2]) if they have trivial extensions that can be joined by a homotopy that holds the endpoints fixed.

We end this section with the digital k-fundamental group originally derived from a classical notion of homotopy theory (see [S, W]). Let (X,x0) be a pointed digital image with k-adjacency. Consider the set πk1(X,x0) of digital k-loop classes [f] in (X,x0) with base point x0. By Proposition 2.7, the product operation

is well-defined on πk1(X,x0). One can see that πk1(X,x0) becomes a group under the ‘∗’ product operation which is called the digital k-fundamental group of (X,x0). As in the case of basic notions in algebraic topology, it is well known in [LB1, Theorem 4.14] that πk1 is a covariant functor from the category of pointed digital images and pointed digitally continuous functions to the category of groups and group homomorphisms.

A digitally convex combination of points e0,e1,…,en in Zn+1 is a point x with

By using the k(2,n+1)-adjacent relation in the digital image Δn={e0,e1,…,en}, we define an orientation of Δn by a linear ordering of its vertices, and call it a digitally standard n-simplex with a linear order for its orientation.

For each n and i, we define the ith face function

is called the digitally boundary operator of the digital image (X,k).

We note that ∂n:ˇSn(X,k)→ˇSn−1(X,k) is a homomorphism. We thus extend the above definition by linearity to the digitally singular n-chains. In particular, if X=Δn and I:Δn→Δn is the identity, then

For each n≥0, the nth digital homology group of a digital image (X,k) with k-adjacency is defined by

The coset [zn]=zn+ˇBn(X,k) is called the digital homology class of zn, where zn is a digitally singular n-cycle.