On the Degree of Boolean Functions as Polynomials over Z_m

Polynomial representations of Boolean functions over various rings such as Z and Z_m have been studied since Minsky and Papert (1969). From then on, they have been employed in a large variety of fields including communication complexity, circuit complexity, learning theory, coding theory and so on. For any integer m>2, each Boolean function has a unique multilinear polynomial representation over ring Z_m. The degree of such polynomial is called modulo-m degree, denoted as deg_m(·). In this paper, we discuss the lower bound of modulo-m degree of Boolean functions. When m=p^k (k> 1) for some prime p, we give a tight lower bound that deg_m(f)≥ k(p-1) for any non-degenerated function f:{0,1}^n→{0,1}, provided that n is sufficient large. When m contains two different prime factors p and q, we give a nearly optimal lower bound for any symmetric function f:{0,1}^n→{0,1} that deg_m(f) ≥n/2+1/p-1+1/q-1. The idea of the proof is as follows. First we investigate properties of polynomial representation of MOD function, then use it to span symmetric Boolean functions to prove the lower bound for symmetric functions, when m is a prime power. Afterwards, Ramsey Theory is applied in order to extend the bound from symmetric functions to non-degenerated ones. Finally, by showing that deg_p(f) and deg_q(f) cannot be small simultaneously, the lower bound for symmetric functions can be obtained when m is a composite but not prime power. 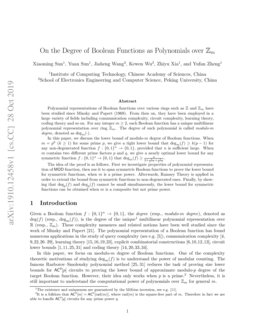 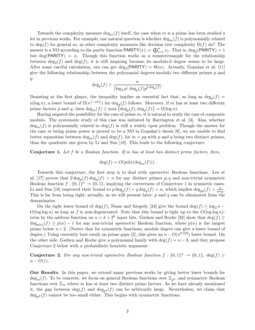 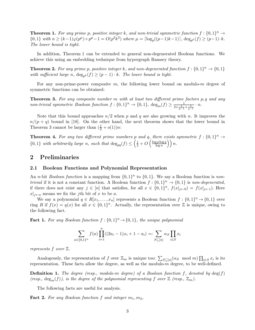 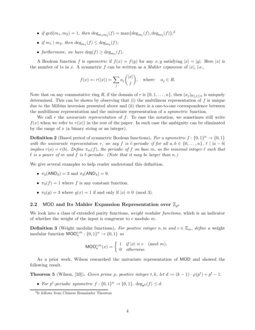 We study the rank of the Sum of Squares (SoS) hierarchy over the Boolean...
Adam Kurpisz, et al. ∙

On the Probabilistic Degrees of Symmetric Boolean functions

Several Separations Based on a Partial Boolean Function

To determine the dimension of null space of any given linearized polynom...
Sihem Mesnager, et al. ∙

In this paper, we prove that a degree d Boolean function depends on at m...
John Chiarelli, et al. ∙

Sufficient reasons for classifier decisions in the presence of constraints

Recent work has unveiled a theory for reasoning about the decisions made...
Niku Gorji, et al. ∙

In this paper, we focus on modulo-m degree of Boolean functions. One of the complexity theoretic motivations of studying degm(f) is to understand the power of modular counting. The famous Razborov–Smolensky polynomial method [25, 31] reduces the task of proving size lower bounds for AC0[p] circuits to proving the lower bound of approximate modulo-p degree of the target Boolean function. However, their idea only works when p is a prime.222It is a folklore that AC0[m]=AC0[rad(m)], where rad(m) is the square-free part of m. Therefore in fact we are able to handle AC0[q] circuits for any prime power q. Nevertheless, it is still important to understand the computational power of polynomials over Zm for general m.

Towards the complexity measure degm(f) itself, the case when m is a prime has been studied a lot in previous works. For example, one natural question is whether degm(f) is polynomially related to deg(f) for general m

D(f) do? The answer is a NO according to the parity function PARITY(x):=⨁ni=1xi. That is, deg2(PARITY)=1 but deg(PARITY)=n. Though this function works as a counterexample for the relationship between deg2(f) and deg(f), it is still inspiring because its modulo-3 degree seems to be large. After some careful calculation, one can get deg3(PARITY)=Θ(n). Actually, Gopalan et al. [11] give the following relationship between the polynomial degrees modulo two different primes p and q:

Daunting at the first glance, the inequality implies an essential fact that, as long as degp(f)=o(logn), a lower bound of Ω(n1−o(1)) for degq(f) follows. Moreover, if m has at least two different prime factors p and q, then degm(f)≥max{degp(f),degq(f)}=Ω(logn).

Having negated the possibility for the case of prime m, it is natural to study the case of composite modulo. The systematic study of this case was initiated by Barrington et al. [3]. Alas, whether degm(f) is polynomially related to deg(f) is still a widely open problem. Though the answer for the case m being prime power is proved to be a NO in Gopalan’s thesis [9], we are unable to find better separation between degm(f) and deg(f), for m=pq with p and q being two distinct primes, than the quadratic one given by Li and Sun [18]. This leads to the following conjecture:

Let f be a Boolean function. If m has at least two distinct prime factors, then,

Towards this conjecture, the first step is to deal with symmetric Boolean functions. Lee et al. [17] proves that 2degp(f)degq(f)>n for any distinct primes p,q and non-trivial symmetric Boolean function f:{0,1}n→{0,1}, implying the correctness of Conjecture 1 in symmetic cases. Li and Sun [18] improved their bound to pdegp(f)+qdegq(f)>n, which implies degpq(f)>np+q. This is far from being tight; actually, as we will present later, p and q can be eliminated from the denominator.

On the tight lower bound of deg(f), Nisan and Szegedy [24] give the bound deg(f)≥log2n−O(loglogn) as long as f is non-degenerated. Note that this bound is tight up to the O(loglogn)-term by the address function on n=k+2k input bits. Gathen and Roche [32] show that deg(f)≥degp(n)(f)≥p(n)−1 for any non-trivial symmetric Boolean function, where p(n) is the largest prime below n+2. (Notice that for symmetric functions, module degree can give a lower bound of degree.) Using currently best result on prime gaps [2], this gives an n−O(n0.525) lower bound. On the other side, Gathen and Roche give a polynomial family with deg(f)=n−3, and they propose Conjecture 2

below with a probabilistic heuristic argument:

In this paper, we extend many previous works by giving better lower bounds for degm(f). To be concrete, we focus on general Boolean functions over Zpk, and symmetric Boolean functions over Zm where m has at least two distinct prime factors. As we have already mentioned it, the gap between deg(f) and degpk(f) can be arbitrarily large. Nevertheless, we claim that degpk(f) cannot be too small either. This begins with symmetric functions:

In addition, Theorem 1 can be extended to general non-degenerated Boolean functions. We achieve this using an embedding technique from hypergraph Ramsey theory.

For any non-prime-power composite m, the following lower bound on modulo-m degree of symmetric functions can be obtained:

Note that this bound approaches n/2 when p and q are also growing with n. It improves the n/(p+q) bound in [18]. On the other hand, the next theorem shows that the lower bound in Theorem 3 cannot be larger than (12+o(1))n:

For any two different prime numbers p and q, there exists symmetric f:{0,1}n→{0,1} with arbitrarily large n, such that degpq(f)≤(12+O(logplogqlogn))n.

Analogously, the representation of f over Zm is unique too: ∑S⊆[n](αSmodm)∏i∈Sxi is its representation. These facts allow the degree, as well as the modulo-m degree, to be well-defined.

The degree (resp., modolo-m degree) of a Boolean function f, denoted by deg(f) (resp., degm(f)), is the degree of the polynomial representing f over Z (resp., Zm).

The following facts are useful for analysis.

For any Boolean function f and integer m1,m2,

We call r the univariate representation of f. To ease the notation, we sometimes still write f(x) when we refer to r(|x|) in the rest of the paper. In such case the ambiguity can be eliminated by the range of x (a binary string or an integer).

We give several examples to help reader understand this definition.

2.2 MOD and Its Mahler Expansion Representation over Zpk

We look into a class of extended parity functions, weight modular functions, which is an indicator of whether the weight of the input is congruent to c modulo m.

As a prior work, Wilson researched the univariate representation of MOD and showed the following result.

For all a∈Zpt, let ∑di=0α(a)i(|x|i) be the Mahler expansion of MODa,ptn(x). Obviously, it can also be represented by “shifted” Mahler expansion with coefficients of MOD0,ptn as ∑di=0α(0)i(|x|−ai). Thus, we get α(a)ℓ=∑d−ℓi=0(−ai)α(0)i+ℓ by Vandermonde convolution, which implies α(0)d=α(a)d for all a∈Zpt and leads to the following corollary.

Consider a special case over Fp. Assume n=pt−1 without loss of generality. Let Apt∈Fpt×ptp be the Mahler expansion coefficient matrix of MODs satisfying the condition that, for i∈Zpt and x∈{0,1}n,

Note that such Apt always exists since degp(MODj,ptn)=pt−1 holds for all j∈Zpt. It is feasible to set (Apt)i,j=(pt−1−jpt−1−i) for all i,j∈Zpt since

The selection of Apt is unique due to the uniqueness of Mahler expansion. According to Lucas’s Theorem, Apt=A⊗tp since

is the Mahler expansion coefficient vector of

f and v is the univariate representation such that f(x)=v|x|modpt for all x∈{0,1}n.

By identifying the degree of MODi,ptn over Zpk, we show that the degree of all pt-periodic functions is constantly small since they can be spanned by {MODj,ptn}pt−1j=0. In Section 3.1, we prove that the degree of any pt-periodic (but not pt−1-periodic) function will not decrease too much from (k−1)⋅φ(pt)+pt−1 during the spanning, despite the cancellation of the high-order coefficients. By a Ramsey-type argument in Section 3.2, we further extend our lower bound to all non-degenerated Boolean function with sufficiently many input bits.

Finally, when the p-period of f is so large that (k−1)⋅φ(pt)+pt−1 is larger than n, the fact that f is not pt−1-periodic implies a lower bound due to the counter-proposition of the following lemma.

We are ready to prove Theorem 1.

With the help of Ramsey theory on hypergraphs, the bound for symmetric functions can be applied to a wider class of Boolean functions — the non-degenerated functions.

where rk(⋅,⋅) is Ramsey number on k-uniform hypergraphs.

The theorem indicates the following property: any 2-edge-colored k-uniform hypergraph on n vertices has a monochromatic clique of size Ω(log∘k(n)),444log∘k(n):=loglog⋯logkn. log∗(n):=min{k:log∘k(n)≤1}. where all hyperedges within have the same color. This property allows us to embed an ω(1)-size symmetric function into any non-degenerated function f:{0,1}n→{0,1}, provided n sufficiently large. Before continuing, we need to introduce the sensitivity of a Boolean function.

Here, x⊕T is the string which only differs from x on all the ith (i∈T) bits.

Construct an edge-coloring for complete t-hypergraph with the vertex set St−1. For all input x∈DOWN(St−1,~x,t), color supp(x⊕~x) in black if f(x)=1. The other edges are colored in white. Let St be the maximum monochromatic clique. According to Theorem 6,

Note that the inputs in DOWN(St,~x,t) have the same f value, since it corresponds to a monochromatic clique. ∎

Suppose m contains at least two different prime factors p and q. To prove Theorem 3, the simple fact that degpq(f)=max{degp(f),degq(f)} will become crucial. To be concrete, degp(f) and degq(f) cannot be small simultaneously, due to the following two lemmas.

For any non-trivial symmetric Boolean function f:{0,1}n→{0,1} and two different primes p and q, if max{degp(f),degq(f)}≥n2, then the theorem is self-evident; otherwise, by Lemma 6, we have

The only thing left here is why Lemma 6 holds. Before continuing, we need the following two lemmas.

For any prime p, integers j,k with j+k<p and distinct a0,…,ak∈Fp satisfying a0,…,ak≥j, the following matrix is non-singular over Fp,

where S is the second Stirling number matrix, i.e., Sij=Stirling2(i,j<