On the Decidability of the Ordered Structures of Numbers 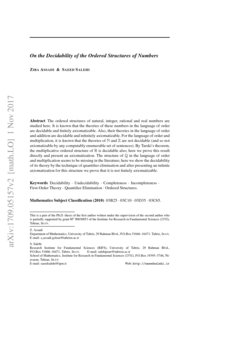 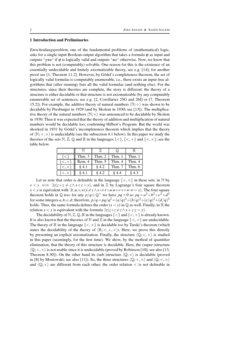 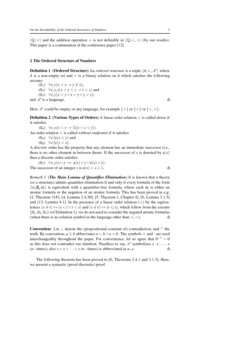 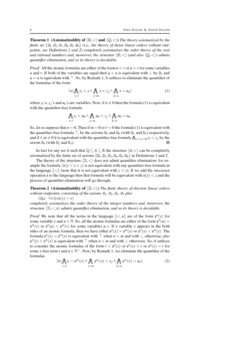 Entscheidungsproblem, one of the fundamental problems of (mathematical) logic, asks for a single-input Boolean-output algorithm that takes a formula φ as input and outputs ‘yes’ if φ is logically valid and outputs ‘no’ otherwise. Now, we know that this problem is not (computably) solvable. One reason for this is the existence of an essentially undecidable and finitely axiomatizable theory, see e.g. visser ; for another proof see (bbj, , Theorem 11.2). However, by Gödel’s completeness theorem, the set of logically valid formulas is computably enumerable, i.e., there exists an input-free algorithms that (after running) lists all the valid formulas (and nothing else). For the structures, since their theories are complete, the story is different: the theory of a structure is either decidable or that structure is not axiomatizable (by any computably enumerable set of sentences; see e.g. (enderton, , Corollaries 25G and 26I) or (monk, , Theorem 15.2)). For example, the additive theory of natural numbers ⟨N;+⟩ was shown to be decidable by Presburger in 1929 (and by Skolem in 1930; see smorynski ). The multiplicative theory of the natural numbers ⟨N;×⟩ was announced to be decidable by Skolem in 1930. Then it was expected that the theory of addition and multiplication of natural numbers would be decidable too; confirming Hilbert’s Program. But the world was shocked in 1931 by Gödel’s incompleteness theorem which implies that the theory of ⟨N;+,×⟩ is undecidable (see the subsection 4.1 below). In this paper we study the theories of the sets N, Z, Q and R in the languages {<}, {<,+} and {<,×}; see the table below.

The decidability of N,Z,Q,R in the languages {<} and {<,+} is already known. It is also known that the theories of N and Z in the language {<,×} are undecidable. The theory of R in the language {<,×} is decidable too by Tarski’s theorem (which states the decidability of the theory of ⟨R;<,+,×⟩). Here, we prove this directly by presenting an explicit axiomatization. Finally, the structure ⟨Q;<,×⟩ is studied in this paper (seemingly, for the first time). We show, by the method of quantifier elimination, that the theory of this structure is decidable. Here, the (super-)structure ⟨Q;+,×⟩ is not usable since it is undecidable (proved by Robinson robinson ; see also (smorynski, , Theorem 8.30)). On the other hand its (sub-)structure ⟨Q;×⟩ is decidable (proved in mostowski by Mostowski; see also salehi-m ). So, the three structures ⟨Q;+,×⟩ and ⟨Q;<,×⟩ and ⟨Q;×⟩ are different from each other; the order relation < is not definable in ⟨Q;×⟩ and the addition operation + is not definable in ⟨Q;<,×⟩ (by our results). This paper is a continuation of the conference paper salehi-mo .

2 The Ordered Structure of Numbers

An ordered structure is a triple ⟨A;<,L⟩ where A is a non-empty set and < is a binary relation on A which satisfies the following axioms:

and L is a language. △⋄

A linear order relation < is called dense if it satisfies

An order relation < is called without endpoints if it satisfies

It is known that a theory (or a structure) admits quantifier elimination if and only if every formula of the form ∃x(⋀⋀iαi) is equivalent with a quantifier-free formula, where each αi is either an atomic formula or the negation of an atomic formula. This has been proved in e.g. (enderton, , Theorem 31F), (hinman, , Lemma 2.4.30), (kk, , Theorem 1, Chapter 4), (marker, , Lemma 3.1.5) and (smorynski, , Lemma 4.1). In the presence of a linear order relation (<) by the equivalences (s≠t)↔(s<t∨t<s) and (s≮t)↔(t⩽s), which follow from the axioms {O1,O2,O3} (of Definition 1), we do not need to consider the negated atomic formulas (when there is no relation symbol in the language other than <,=). △⋄

Let ⊥ denote the (propositional constant of) contradiction, and ⊤ the truth. By convention, a⩽b abbreviates a<b∨a=b. The symbols × and ⋅ are used interchangeably throughout the paper. For convenience, let us agree that 0−1=0 as this does not contradict our intuition. Needless to say, xn symbolizes x⋅x⋅…⋅x (n−times); also x+x+⋯+x (n−times) is abbreviated as n⋅x. △⋄

The following theorem has been proved in (marker, , Theorems 2.4.1 and 3.1.3). Here, we present a syntactic (proof-theoretic) proof.

The theory axiomatized by the finite set {O1,O2,O3,O4,O5,O6} (i.e., the theory of dense linear orders without endpoints, see Definitions 1 and 2) completely axiomatizes the order theory of the real and rational numbers and, moreover, the structure ⟨R;<⟩ (and also ⟨Q;<⟩) admits quantifier elimination, and so its theory is decidable.

where yi’s, zj’s and uk’s are variables. Now, if n≠0 then the formula (1) is equivalent with the quantifier-free formula

In fact for any set A such that Q⊆A⊆R the structure ⟨A;<⟩ can be completely axiomatized by the finite set of axioms {O1,O2,O3,O4,O5,O6} in Definitions 1 and 2.

The finite theory of discrete linear orders without endpoints, consisting of the axioms O1, O2, O3, O7 plus

completely axiomatizes the order theory of the integer numbers and, moreover, the structure ⟨Z;<,s⟩ admits quantifier elimination, and so its theory is decidable.

We note that all the terms in the language {<,s} are of the form sn(y) for some variable y and n∈N. So, all the atomic formulas are either of the form sn(u)=sm(v) or sn(u)<sm(v) for some variables u,v. If a variable x appears in the both sides of an atomic formula, then we have either sn(x)=sm(x) or sn(x)<sm(x). The formula sn(x)=sm(x) is equivalent with ⊤ when n=m and with ⊥ otherwise; also sn(x)<sm(x) is equivalent with ⊤ when n<m and with ⊥ otherwise. So, it suffices to consider the atomic formulas of the form t<sn(x) or sn(x)<t or sn(x)=t for some x-free term t and n∈N+. Now, by Remark 1, we eliminate the quantifier of the formulas

for some (possibly new) terms t′i,s′j,u′k (and y=sα(x)). Now, if n≠0 then the formula (3) is equivalent with the quantifier-free formula

Let us then assume that n=0. The formula

is equivalent with the quantifier-free formula ⋀⋀i<ℓ,j<ms(ti)<sj by the axiom O7 (in Definition 2). ⊠⊞

The structure ⟨N;<⟩ can also be finitely axiomatized. The following theorem has been proved in (enderton, , Theorem 32A) so we do not present its proof here.

The finite theory consisting of the axioms {O1,O2,O3,O7} (in Definitions 1 and 2) and also the following two axioms

completely axiomatizes the order theory of the natural numbers and, moreover, the structure ⟨N;<,s,0⟩ admits quantifier elimination, and so its theory is decidable. ⊠⊞

3 The Additive Ordered Structures of Numbers

Here we study the structures of the sets N,Z,Q,R over the language {+,<}.

It is called an abelian group when it also satisfies

A group is called non-trivial when

and it is called divisible when for n∈N we have

An ordered group is a group equipped with an order relation < (which satisfies O1,O2,O3) such that also the axiom

is satisfied in it. △⋄

The following infinite theory (of non-trivial ordered divisible abelian groups) completely axiomatizes the order and additive theory of the real and rational numbers and, moreover, the structure ⟨R;<,+,−,0⟩ (and also ⟨Q;<,+,−,0⟩) admits quantifier elimination, and so its theory is decidable.

Firstly, let us note that O4, O5 and O6 can be proved from the presented axioms: if a<b then by A7 there exists some c such that c+c=a+b; one can easily show that a<c<b holds. Thus O4 is proved; for O5 note that for any 0<a we have a<a+a by A5. A dual argument can prove the axiom O6. Also, the equivalences

with a quantifier-free formula. By the equivalences (i) and (ii) above we can assume that pi’s and qj’s and rk’s in the formula (5) are equal to each other, say to α. Then by A7 the formula (5) is equivalent with

For eliminating the quantifiers of the formulas of the structure ⟨Z;<,+⟩ we add the (binary) congruence relations {≡n}n⩾2 (modulo standard natural numbers) to the language; let us note that a≡nb is equivalent with ∃x(a+n⋅x=b). About these congruence relations the following Generalized Chinese Remainder Theorem will be useful later; below we present a proof of this theorem from frankel .

The infinite theory of non-trivial discretely ordered abelian groups with the division algorithm, that is O1, O2, O3, A1, A2, A3, A4, A5 and

completely axiomatizes the order and additive theory of the integer numbers and, moreover, the (theory of the) structure ⟨Z;<,+,−,0,1,{≡n}n⩾2⟩ admits quantifier elimination, so has a decidable theory.

The axiom A∘7 is equivalent with ∀x⋁⋁i<n(x≡n¯i∧⋀⋀i≠j<nx≢n¯j), and so the negation signs behind the congruences can be eliminated by the following equivalence: (a≢nb)↔⋁⋁0<i<n(a≡nb+¯i). Whence, by Remark 1, it suffices to show the equivalence of the formula

with some quantifier-free formula, where ai’s, bj’s, ck’s and dℓ’s are natural numbers and ti’s, uj’s, vk’s and wℓ’s are x-free terms. By the equivalences

which are provable from the axioms, we can assume that ai’s, bj’s, ck’s and dℓ’s in the formula (7) are equal to each other, say to α. Now, (7) is equivalent with

for y=α⋅x and some (possibly new) terms t′i’s, u′j’s, v′k’s and w′ℓ’s. If r≠0 then (8) is readily equivalent with the quantifier-free formula which results from substituting w′0 with y. So, it suffices to eliminate the quantifier of

The theory of the structure ⟨Z;<,+⟩ cannot be axiomatized finitely, because O1, O2, O3, A1, A2, A3, A4, A5, O∘7 and any finite number of the instances of A∘7 cannot prove all the instances of A∘7. To see this take p to be a sufficiently large prime number and put N=(p−1)!. Let us recall that the set Q/N={m/Nk∣m∈Z,k∈N} of rational numbers is closed under addition and the operation x↦x/n for any 1<n<p. Let A=(Q/N)×Z and define the structure by the following:

4 The Multiplicative Ordered Structures of Numbers

In this final section we consider the theories of the number sets N,Z,R and Q in the language {<,×}.

4.1 Natural Numbers with Order and Multiplication

The theory of the structure ⟨N;<,×⟩ is not decidable (and so no computably enumerable set of sentences can axiomatize this structure). This is because:

4.2 Integer Numbers with Order and Multiplication

4.3 Real Numbers with Order and Multiplication

The structure ⟨R;<,×⟩ is decidable, since by a theorem of Tarski the (theory of the) structure ⟨R;<,+,×⟩ can be completely axiomatized by the theory of real closed ordered fields, and so has a decidable theory; see e.g. (kk, , Theorem 7, Chapter 4), (marker, , Theorem 3.3.15) or (monk, , Theorem 21.36). Here, we prove the decidability of the theory of ⟨R;<,×⟩ directly (without using Tarski’s theorem) and provide an explicit axiomatization for it. Before that let us make a little note about the theory ⟨R+;<,×⟩ (of the positive real numbers) which is isomorphic to ⟨R;<,+⟩ by the mapping x↦log(x). Thus, we have the following immediate corollary of Theorem 3.1:

The following infinite theory (of non-trivial ordered divisible abelian groups) completely axiomatizes the order and multiplicative theory of the positive real numbers and, moreover, ⟨R+;<,×,□−1,1⟩ admits quantifier elimination, and so its theory is decidable.

The following infinite theory completely axiomatizes the order and multiplicative theory of the real numbers and, moreover, the structure ⟨R;<,×,□−1,−1,0,1⟩ admits quantifier elimination, and so its theory is decidable.