In this work, we analyze the properties of the solution to the covariance steering problem for discrete time Gaussian linear systems with a squared Wasserstein distance terminal cost. In our previous work, we have shown that by utilizing the state feedback control policy parametrization, this stochastic optimal control problem can be associated with a difference of convex functions program. Here, we revisit the same covariance control problem but this time we focus on the analysis of the problem. Specifically, we establish the existence of solutions to the optimization problem and derive the first and second order conditions for optimality. We provide analytic expressions for the gradient and the Hessian of the performance index by utilizing specialized tools from matrix calculus. Subsequently, we prove that the optimization problem always admits a global minimizer, and finally, we provide a sufficient condition for the performance index to be a strictly convex function (under the latter condition, the problem admits a unique global minimizer). In particular, we show that when the terminal state covariance is upper bounded, with respect to the Löwner partial order, by the covariance matrix of the desired terminal normal distribution, then our problem admits a unique global minimizing state feedback gain. The results of this paper set the stage for the development of specialized control design tools that exploit the structure of the solution to the covariance steering problem with a squared Wasserstein distance terminal cost. 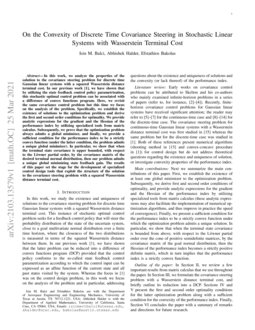 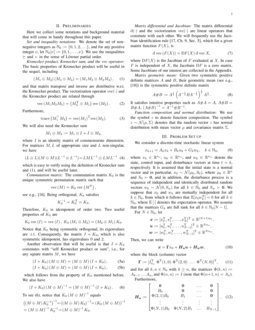 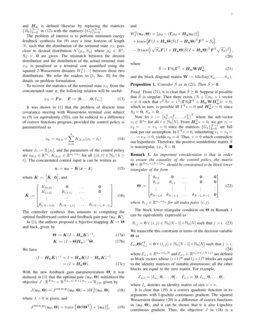 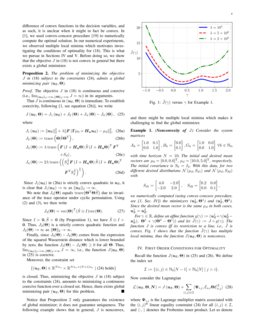 In this work, we study the existence and uniqueness of solutions to the covariance steering problem for discrete time Gaussian linear systems with a squared Wasserstein distance terminal cost. This instance of stochastic optimal control problem seeks for a feedback control policy that will steer the probability distribution of the state of the uncertain system, close to a goal multivariate normal distribution over a finite time horizon, where the closeness of the two distributions is measured in terms of the squared Wasserstein distance between them. In our previous work

[1], we have shown that the latter problem can be reduced into a difference of convex functions program (DCP) provided that the control policy conforms to the so-called state feedback control parametrization according to which the control input can be expressed as an affine function of the current state and all past states visited by the system. Whereas the focus in [1] was on the control design problem, in this work we focus on the analysis of the problem and in particular, addressing questions about the existence and uniqueness of solutions and the convexity (or lack thereof) of the performance index.

Literature review: Early works on covariance control problems can be attributed to Skelton and his co-authors who mainly examined infinite-horizon problems in a series of papers (refer to, for instance, [2, 3, 4]). Recently, finite-horizon covariance control problems for Gaussian linear systems have received significant attention; the reader may refer to [5, 6, 7] for the continuous-time case and [8, 9, 10, 11, 12, 13, 14] for the discrete-time case. The covariance steering problem for continuous-time Gaussian linear systems with a Wasserstein distance terminal cost was first studied in [15] whereas the same problem but for the discrete-time case was studied in [1]. Both of these references present numerical algorithms (shooting method in [15] and convex-concave procedure in [1]) for control design but do not address theoretical questions regarding the existence and uniqueness of solution, or investigate convexity properties of the performance index.

Main contributions: Next we summarize the main contributions of this paper. First, we establish the existence of at least one global minimizer to the optimization problem. Subsequently, we derive first and second order conditions of optimality, and provide analytic expressions for the gradient and the Hessian of the performance index by utilizing specialized tools from matrix calculus (these analytic expressions may also facilitate the implementation of numerical optimization algorithms, and thus improve in practice the speed of convergence). Finally, we present a sufficient condition for the performance index to be a strictly convex function under which the optimization problem admits a unique solution. In particular, we show that when the terminal state covariance is bounded from above, with respect to the Löwner partial order over the cone of positive semidefinite matrices, by the covariance matrix of the goal normal distribution, then the Hessian of the performance index becomes a strictly positive definite matrix, which in turn implies that the performance index is a strictly convex function.

Outline of the paper: In Section II, we review a few important results from matrix calculus that we use throughout the paper. In Section III, we formulate the covariance steering problem with a Wasserstein distance terminal cost, and briefly outline its reduction into a DCP. Sections IV and V present the first and second order optimality conditions for the latter optimization problem along with a sufficient condition for the convexity of the performance index. Finally, Section VI concludes the paper with a summary of remarks and directions for future research.

Here we collect some notations and background material that will come in handy throughout this paper.

The basic properties of Kronecker product will be useful in the sequel, including

and that matrix transpose and inverse are distributive w.r.t. the Kronecker product. The vectorization operator

vec(⋅) and the Kronecker product are related through

We will also need the Kronecker sum

is an identity matrix of commensurate dimension. For matrices

M,L of appropriate size and L non-singular, we have

which is easy to verify using the definition of Kronecker sum and (1), and will be useful later.

Therefore, K0 is idempotent of order two. Two useful properties of K0 are

being symmetric orthogonal, its eigenvalues are

±1. Consequently, the matrix I+K0, which is also symmetric idempotent, has eigenvalues 0 and 2.

Another observation that will be useful is that I+K0 commutes with “self Kronecker product or sum”, i.e., for any square matrix M, we have

which follows from the property of K0 mentioned before. We also have

The matrix differential d(⋅) and the vectorization vec(⋅) are linear operators that commute with each other. We will frequently use the Jacobian identification rule [17, Ch. 9, Sec. 5], which for a given matrix function F(X), is

where DF(X) is the Jacobian of F evaluated at X. In case F is independent of X, the Jacobain DF

is a zero matrix. Some Jacobians of our interest are collected in the Appendix.

Given two symmetric positive definite matrices A and B

[18]) is the symmetric positive definite matrix

We use the symbol ∘ to denote function composition. The symbol z∼N(μ,Σ) denotes that the random vector z has normal distribution with mean vector μ and covariance matrix Σ.

where xk∈Rnx, uk∈Rnu, and wk∈Rnw denote the state, control input, and disturbance vectors at time t=k, respectively. It is assumed that the initial state is a normal vector and in particular, x0∼N(μ0,S0), where μ0∈Rn and S0≻0, and in addition, the disturbance process is a sequence of independent and identically distributed random vectors wk∼N(0,Sw) for all k∈N0 and Sw≻0. We suppose that x0 and wk are mutually independent for all k∈N0, from which it follows that E[x0wTk]=0 for all k∈N0, where E[⋅] denotes the expectation operator. We assume that the matrices Gk are full rank for all k∈N0[N−1].

Then, we can write

where the block (column) vector

To recover the statistics of the terminal state xN from the concatenated state x, the following relation will be useful:

It was shown in [1] that the problem of discrete time covariance steering with Wasserstein terminal cost subject to (9) (or equivalently (10)), can be reduced to a difference of convex functions program, provided the control policy is parameterized as

where ¯xt:=E[xt], and the parameters of the control policy are uff,k∈Rnx, K(k,t)∈Rnu×nx for all {(k,t)∈N0∣k≥t}. The concatenated control input u can be written as

In [1], the authors proposed a bijective mapping K↦Θ and back, given by

With the new feedback gain parameterization Θ, it was deduced in [1] that the optimal pair (uff,Θ) minimizes the objective J:RNnu×RNnu×(N+1)nx↦R≥0, given by

and the block diagonal matrix W:=blkdiag(Sw,…,Sw).

An important consideration is that in order to ensure the causality of the control policy, the matrix Θ∈RNnu×(N+1)nx should be constrained to be block lower triangular of the form

where θi,j∈Rnu×nx for all index pairs (i,j).

It is clear that (19) is a convex quadratic function in its arguments with Lipschitz continuous gradient. The squared Wasserstein distance (III) is a difference of convex functions in (uff,Θ), and it can be shown that it is also Lipschitz continuous gradient. Thus, the objective J in (18) is a difference of convex functions in the decision variables, and as such, it is unclear when it might in fact be convex. In [1], we used convex-concave procedure [19] to numerically compute the optimal solution. In our numerical experiments, we observed multiple local minima which motivates investigating the conditions of optimality for (18). This is what we pursue in Sections IV and V. Before doing so, we show that the objective J in (18) is not convex in general but there exists a global minimizer.

The problem of minimizing the objective J in (18) subject to the constraints (24), admits a global minimizing pair (uff,Θ).

That J is continuous in (uff,Θ) is immediate. To establish coercivity, following [1, see equation (26)], we write

We note that J2(Θ) equals trace(ΘTΘ~S) due to invariance of the trace operator under cyclic permutation. Using (2) and (3), we then write

is closed. Thus, minimizing the objective J in (18) subject to the constraints (24), amounts to minimizing a continuous coercive function over a closed set. Hence, there exists global minimizing pair (uff,Θ) for this problem. ∎

Notice that Proposition 2 only guarantees the existence of global minimizer; it does not guarantee uniqueness. The following example shows that in general, J is nonconvex, and there might be multiple local minima which makes it challenging to find the global minimizer.

we numerically computed (using convex-concave procedure, see [1, Sec. IV]) the minimizers (u1ff,Θ1) and (u1ff,Θ2). Since the desired mean vector is the same μd in both cases, u1ff=u2ff.

where Ψi,j is the Lagrange multiplier matrix associated with the (i,j)th linear equality constraint (24) for all (i,j)∈I, and ⟨⋅,⋅⟩ denotes the Frobenius inner product. Let us denote the optimal pair as (u⋆ff,Θ⋆). The first order necessary conditions for optimality are

We next compute the gradients of L w.r.t. the vector variable uff and the matrix variable Θ, respectively, and use them to determine the pair (u⋆ff,Θ⋆).

and therefore, the condition ∂L∂uff∣∣∣(u⋆ff,Θ⋆)=0 yields a linear matrix-vector equation

The matrix I+λHuTFTFHu in (29) is positive definite (thus non-singular), and the optimal feedforward control is

Notice that u⋆ff is unique.

which follows from the invariance of trace under cyclic permutation, and the from the fact that the directional derivative (in the matricial direction Z)

From the chain rule of Jacobians, we have

wherein using Lemma 1 and 2 from Appendix, we get

and notice that ∂J4∂Θ=2λY4. Therefore, writing

To proceed further, we utilize the following results: