On the convergence of maximum variance unfolding

Maximum Variance Unfolding is one of the main methods for (nonlinear) dimensionality reduction. We study its large sample limit, providing specific rates of convergence under standard assumptions. We find that it is consistent when the underlying submanifold is isometric to a convex subset, and we provide some simple examples where it fails to be consistent. 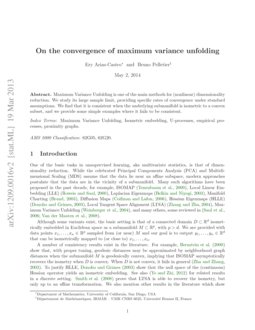 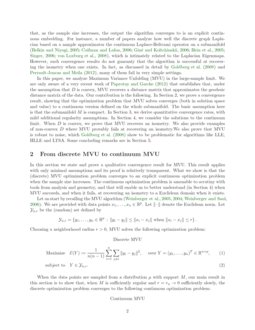 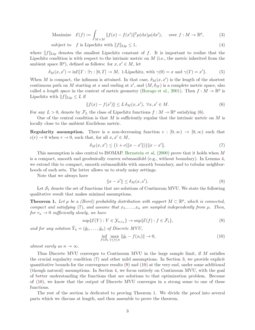 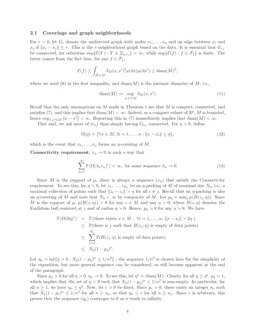 One of the basic tasks in unsupervised learning, aka multivariate statistics, is that of dimensionality reduction. While the celebrated Principal Components Analysis (PCA) and Multidimensional Scaling (MDS) assume that the data lie near an affine subspace, modern approaches postulate that the data are in the vicinity of a submanifold. Many such algorithms have been proposed in the past decade, for example, ISOMAP

Although some variants exist, the basic setting is that of a connected domain D⊂Rd isometrically embedded in Euclidean space as a submanifold M⊂Rp, with p>d. We are provided with data points x1,…,xn∈Rp sampled from (or near) M and our goal is to output y1,…,yn∈Rd that can be isometrically mapped to (or close to) x1,…,xn.

A number of consistency results exist in the literature. For example, Bernstein et al. (2000) show that, with proper tuning, geodesic distances may be approximated by neighborhood graph distances when the submanifold M is geodesically convex, implying that ISOMAP asymptotically recovers the isometry when D is convex. When D is not convex, it fails in general (Zha and Zhang, 2003). To justify HLLE, Donoho and Grimes (2003) show that the null space of the (continuous) Hessian operator yields an isometric embedding. See also (Ye and Zhi, 2012) for related results in a discrete setting. Smith et al. (2008) prove that LTSA is able to recover the isometry, but only up to an affine transformation. We also mention other results in the literature which show that, as the sample size increases, the output the algorithm converges to is an explicit continuous embedding. For instance, a number of papers analyze how well the discrete graph Laplacian based on a sample approximates the continuous Laplace-Beltrami operator on a submanifold (Belkin and Niyogi, 2005; von Luxburg et al., 2008; Singer, 2006; Hein et al., 2005; Giné and Koltchinskii, 2006; Coifman and Lafon, 2006), which is intimately related to the Laplacian Eigenmaps. However, such convergence results do not guaranty that the algorithm is successful at recovering the isometry when one exists. In fact, as discussed in detail by Goldberg et al. (2008) and Perrault-Joncas and Meila (2012), many of them fail in very simple settings.

In this paper, we analyze Maximum Variance Unfolding (MVU) in the large-sample limit. We are only aware of a very recent work of Paprotny and Garcke (2012) that establishes that, under the assumption that D is convex, MVU recovers a distance matrix that approximates the geodesic distance matrix of the data. Our contribution is the following. In Section 2, we prove a convergence result, showing that the optimization problem that MVU solves converges (both in solution space and value) to a continuous version defined on the whole submanifold. The basic assumption here is that the submanifold M is compact. In Section 3, we derive quantitative convergence rates, with mild additional regularity assumptions. In Section 4, we consider the solutions to the continuum limit. When D is convex, we prove that MVU recovers an isometry. We also provide examples of non-convex D where MVU provably fails at recovering an isometry.We also prove that MVU is robust to noise, which Goldberg et al. (2008) show to be problematic for algorithms like LLE, HLLE and LTSA. Some concluding remarks are in Section 5.

2 From discrete MVU to continuum MVU

where ∥f∥Lip denotes the smallest Lipschitz constant of f. It is important to realize that the Lipschitz condition is with respect to the intrinsic metric on M (i.e., the metric inherited from the ambient space Rp), defined as follows: for x,x′∈M, let

When M is compact, the infimum is attained. In that case, δM(x,x′) is the length of the shortest continuous path on M starting at x and ending at x′, and (M,δM) is a complete metric space, also called a length space in the context of metric geometry (Burago et al., 2001). Then f:M→Rp is Lipschitz with ∥f∥Lip≤L if

For any L>0, denote by FL the class of Lipschitz functions f:M→Rp satisfying (6).

One of the central condition is that M is sufficiently regular that the intrinsic metric on M is locally close to the ambient Euclidean metric.

This assumption is also central to ISOMAP. Bernstein et al. (2000) prove that it holds when M is a compact, smooth and geodesically convex submanifold (e.g., without boundary). In Lemma 4, we extend this to compact, smooth submanifolds with smooth boundary, and to tubular neighborhoods of such sets. The latter allows us to study noisy settings.

Note that we always have

Let S1 denote the set of functions that are solutions of Continuum MVU. We state the following qualitative result that makes minimal assumptions.

be a (Borel) probability distribution with support

M⊂Rp, which is connected, compact and satisfying (7), and assume that x1,…,xn are sampled independently from μ. Then, for rn→0 sufficiently slowly, we have

Thus Discrete MVU converges to Continuum MVU in the large sample limit, if M satisfies the crucial regularity condition (7) and other mild assumptions. In Section 3, we provide explicit quantitative bounds for the convergence results (9) and (10) at the very end, under some additional (though natural) assumptions. In Section 4, we focus entirely on Continuum MVU, with the goal of better understanding the functions that are solutions to that optimization problem. Because of (10), we know that the output of Discrete MVU converges in a strong sense to one of these functions.

The rest of the section is dedicated to proving Theorem 1. We divide the proof into several parts which we discuss at length, and then assemble to prove the theorem.

For r>0, let Gr denote the undirected graph with nodes x1,…,xn and an edge between xi and xj if ∥xi−xj∥≤r. This is the r-neighborhood graph based on the data. It is essential that Grn be connected, for otherwise sup{E(Y):Y∈Yn,rn}=∞, while sup{E(f):f∈F1} is finite. The latter comes from the fact that, for any f∈F1,

where we used (6) in the first inequality, and diam(M) is the intrinsic diameter of M, i.e.,

That said, we ask more of (rn) than simply having Grn connected. For η>0, define

which is the event that x1,…,xn forms an η-covering of M.

Connectivity requirement. rn→0 in such a way that

Since M is the support of μ, there is always a sequence (rn) that satisfy the Connectivity requirement. To see this, for η>0, let z1,…,zNη be an η-packing of M of maximal size Nη, i.e., a maximal collection of points such that ∥zi−zj∥>η for all i≠j. Recall that an η-packing is also an η-covering of M and note that Nη<∞ by compacity of M. Let pη=minjμ(B(zj,η)). Since M is the support of μ, μ(B(z,η))>0 for any z∈M and any η>0, where B(z,η) denotes the Euclidean ball centered at z and of radius η>0. Hence, pη>0 for any η>0. We have

Let ηn=inf{η>0:Nη(1−pη)n≤1/n2} ; the sequence 1/n2 is chosen here for the simplicity of the exposition, but more general sequence can be considered, as will become apparent at the end of the paragraph.

With such a choice of (ηn), we have ∑n≥1P(Ω(2ηn)c)≤∑n≥11/n2<∞. Therefore, if we take rn=√ηn, it satisfies the Connectivity requirement. In Section 3.2 we derive a quantitative bound on rn that guaranty (13) under additional assumptions. Note that the sequence (1/n2) in the definition of ηn can be replaced by any summable decreasing sequence.

The rationale behind the requirement on (rn) is the same as in (Bernstein et al., 2000): it allows to approximate each curve on M with a path in Grn of nearly the same length. We utilize this in the following subsection.

Assuming that the sampling is dense enough that Ω(η)

holds, we interpolate a set of vectors

Y∈Yn,r with a Lipschitz function f∈F1+O(η/r). Formally, we have the following.

We prove this result. The first step is to show that this is at all possible in the sense that

Now suppose that δM(xi,xj)>r. Let γ be a path in M connecting xi to xj of minimal length l=δM(xi,xj). Split γ into N arcs of lengths l1=r/2 plus one arc of length lN+1<l1, so that

Similarly, for the last arc, recalling that xtN+1=xj, we have δM(xj,xtN)=lN+1+η<l1+η<r, and therefore

2.3 Bounds on the energy

Since the function c is non-decreasing, c(∥xi−xj∥)≤c(r), and so

and applying the triangle inequality, we arrive at

Finally, we show that E is continuous (in fact Lipschitz) on F1 for the supnorm. For any f and g in F1, and any x and x′ in M, we have:

The first inequality is that of Cauchy-Schwarz. Hence,

2.4 More coverings and the Law of Large Numbers

The last step is to show that the supremum of the empirical process (18) converges to zero. For this, we use a packing (covering) to reduce the supremum over F1

to a maximum over a finite set of functions. We then apply the Law of Large Numbers to each difference in the maximization.

The reason to use F01 is that it is bounded in supnorm. Indeed, for f∈F01, we have

by the LLN applied to each term. Therefore, when ε>0 is fixed, the second term in (22) tends to zero almost surely, and since ε>0 is arbitrary, we conclude that

2.5 Large deviations of the sample energy

be a sequence of i.i.d. random variables with values in

Clearly, the RHS is summable for every ε>0 fixed, so the convergence in (23) happens in fact with probability one, that is,

Assume rn satisfies the Connectivity requirement, and that n is large enough that max(c(rn),6λn)<1. When Ω(λnrn) holds, by (19), we have

while when Ω(λnrn) does not hold, since the energies are bounded by diam(M)2, we have

Combining these inequalities, we deduce that

Almost surely, the sum of the first two terms on the RHS tends to 0 by the fact that c(r)→0 when r→0, and (13) since rn satisfies the Connectivity requirement. The third term tends to 0 by (23). Hence, (9) is established.

Assume rn satisfies the Connectivity requirement, and that n is large enough that λn≤1/2. Let ^Yn denote any solution of Discrete MVU. When Ω(λnrn) holds, there is ^fn∈F1+6λn such that ^Yn=Yn(^fn). Note that the existence of the interpolating function ^fn holds on Ω(λnrn) for each fixed n, and that this does not imply the existence of an interpolating sequence (^fn)n≥1. That said, for each ω in the event liminfnΩ(λnrn), there exists a sequence ^fn(.;ω) and an integer n0(ω) such that ^Yn=Yn(^fn) for all n≥n0(ω), i.e., the sequence is interpolating a solution of Discrete MVU for all n large enough. In addition, when rn satisfies the Connectivity requirement, then P(limsupnΩ(λnrn)c)=0 by the Borel-Cantelli lemma. Hence the event liminfnΩ(λnrn) holds with probability one.

In fact, without loss of generality, we may assume that ^fn∈F01+6λn⊂F04. Since F04 is equicontinuous and bounded, it is compact for the topology of the supnorm by the Arzelà-Ascoli Theorem. Hence, any subsequence of ^fn admits a subsequence that converges in supnorm. And since F0L increases with L and F01=∩L>1F0L, any accumulation point of (^fn) is in F01.