On the Convergence of AdaBound and its Connection to SGD

Adaptive gradient methods such as Adam have gained extreme popularity due to their success in training complex neural networks and less sensitivity to hyperparameter tuning compared to SGD. However, it has been recently shown that Adam can fail to converge and might cause poor generalization -- this lead to the design of new, sophisticated adaptive methods which attempt to generalize well while being theoretically reliable. In this technical report we focus on AdaBound, a promising, recently proposed optimizer. We present a stochastic convex problem for which AdaBound can provably take arbitrarily long to converge in terms of a factor which is not accounted for in the convergence rate guarantee of Luo et al. (2019). We present a new $O(\sqrt T)$ regret guarantee under different assumptions on the bound functions, and provide empirical results on CIFAR suggesting that a specific form of momentum SGD can match AdaBound's performance while having less hyperparameters and lower computational costs. 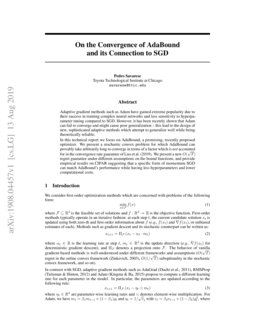 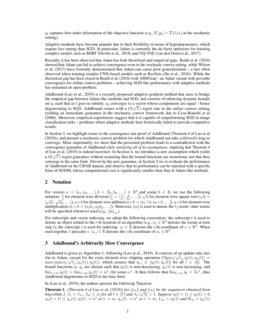 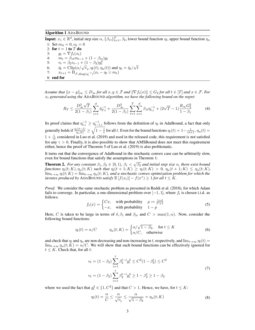 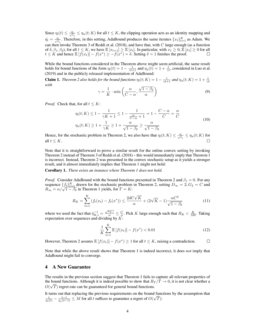 We consider first-order optimization methods which are concerned with problems of the following form:

where F⊆Rd is the feasible set of solutions and f:Rd→R is the objective function. First-order methods typically operate in an iterative fashion: at each step t, the current candidate solution xt is updated using both zero-th and first-order information about f (e.g., f(xt) and ∇f(xt)

, or unbiased estimates of each). Methods such as gradient descent and its stochastic counterpart can be written as:

where αt∈R is the learning rate at step t, mt∈Rd is the update direction (e.g., ∇f(xt) for deterministic gradient descent), and ΠF denotes a projection onto F. The behavior of vanilla gradient-based methods is well-understood under different frameworks and assumptions (O(√T) regret in the online convex framework (Zinkevich, 2003), O(1/√T) suboptimality in the stochastic convex framework, and so on).

In contrast with SGD, adaptive gradient methods such as AdaGrad (Duchi et al., 2011)

(Tieleman and Hinton, 2012) and Adam (Kingma and Ba, 2015) propose to compute a different learning rate for each parameter in the model. In particular, the parameters are updated according to the following rule:

where ηt∈Rd are parameter-wise learning rates and ⊙ denotes element-wise multiplication. For Adam, we have mt=β1mt−1+(1−β1)gt and ηt=1/√vt with vt=β2vt−1+(1−β2)g2t, where gt captures first-order information of the objective function (e.g., E[gt]=∇f(xt) in the stochastic setting).

Adaptive methods have become popular due to their flexibility in terms of hyperparameters, which require less tuning than SGD. In particular, Adam is currently the de-facto optimizer for training complex models such as BERT (Devlin et al., 2018) and VQ-VAE (van den Oord et al., 2017).

Recently, it has been observed that Adam has both theoretical and empirical gaps. Reddi et al. (2018) showed that Adam can fail to achieve convergence even in the stochastic convex setting, while Wilson et al. (2017) have formally demonstrated that Adam can cause poor generalization – a fact often observed when training simpler CNN-based models such as ResNets (He et al., 2016). While the theoretical gap has been closed in Reddi et al. (2018) with AMSGrad – an Adam variant with provable convergence for online convex problems – achieving SGD-like performance with adaptive methods has remained an open-problem.

AdaBound (Luo et al., 2019) is a recently proposed adaptive gradient method that aims to bridge the empirical gap between Adam-like methods and SGD, and consists of enforcing dynamic bounds on ηt such that as t goes to infinity, ηt

converges to a vector whose components are equal – hence degenerating to SGD. AdaBound comes with a

O(√T) regret rate in the online convex setting, yielding an immediate guarantee in the stochastic convex framework due to Cesa-Bianchi et al. (2006). Moreover, empirical experiments suggest that it is capable of outperforming SGD in image classification tasks – problems where adaptive methods have historically failed to provide competitive results.

In Section 3, we highlight issues in the convergence rate proof of AdaBound (Theorem 4 of Luo et al. (2019)), and present a stochastic convex problem for which AdaBound can take arbitrarily long to converge. More importantly, we show that the presented problem leads to a contradiction with the convergence guarantee of AdaBound while satisfying all of its assumptions, implying that Theorem 4 of Luo et al. (2019) is indeed incorrect. In Section 4, we introduce a new assumption which yields a O(√T) regret guarantee without assuming that the bound functions are monotonic nor that they converge to the same limit. Driven by the new guarantee, in Section 5 we re-evaluate the performance of AdaBound on the CIFAR dataset, and observe that its performance can be matched with a specific form of SGDM, whose computational cost is significantly smaller than that of Adam-like methods.

AdaBound is given as Algorithm 1, following (Luo et al., 2019). It consists of an update rule similar to Adam, except for the extra element-wise clipping operation Clip(α/√vt,ηl(t),ηu(t))=max(min(α/√vt,ηu(t)),ηl(t)), which assures that ^ηt,i∈[ηl(t),ηu(t)] for all i∈[d]. The bound functions ηl,ηu are chosen such that ηl(t) is non-decreasing, ηu(t) is non-increasing, and limt→∞ηl(t)=limt→∞ηu(t)=α⋆, for some α⋆. It then follows that limt→∞^ηt=→1α⋆, thus AdaBound degenerates to SGD in the time limit.

Its proof claims that η−1t,i≥η−1t−1,i follows from the definition of ηt in AdaBound, a fact that only generally holds if ηl(t−1)ηu(t)≥√1−1t for all t. Even for the bound functions ηl(t)=1−1γt+1,ηu(t)=1+1γt considered in Luo et al. (2019) and used in the released code, this requirement is not satisfied for any γ>0. Finally, it is also possible to show that AMSBound does not meet this requirement either, hence the proof of Theorem 5 of Luo et al. (2019) is also problematic.

It turns out that the convergence of AdaBound in the stochastic convex case can be arbitrarily slow, even for bound functions that satisfy the assumptions in Theorem 1:

We consider the same stochastic problem as presented in Reddi et al. (2018), for which Adam fails to converge. In particular, a one-dimensional problem over [−1,1], where ft is chosen i.i.d. as follows:

Here, C is taken to be large in terms of δ,β1 and β2, and C>max(1,α). Now, consider the following bound functions:

and check that ηl and ηu are non-decreasing and non-increasing in t, respectively, and limt→∞ηl(t)=limt→∞ηu(t;K)=α/C. We will show that such bound functions can be effectively ignored for t≤K. Check that, for all t:

Check that, for all t≤K:

Hence, for the stochastic problem in Theorem 2, we also have that ηl(t;K)≤α√vt≤ηu(t;K) for all t≤K. ∎

Note that it is straightforward to prove a similar result for the online convex setting by invoking Theorem 2 instead of Theorem 3 of Reddi et al. (2018) – this would immediately imply that Theorem 1 is incorrect. Instead, Theorem 2 was presented in the convex stochastic setup as it yields a stronger result, and it almost immediately implies that Theorem 1 might not hold:

There exists an instance where Theorem 1 does not hold.

Consider AdaBound with the bound functions presented in Theorem 2 and β1=0. For any sequence {ft}Kt=1 drawn for the stochastic problem in Theorem 2, setting D∞=2,G2=C and R∞=α/√1−β2 in Theorem 1 yields, for T=K:

where we used the fact that ^η−1K,i=√vK,iα≤Cα. Pick K large enough such that RK<K100. Taking expectation over sequences and dividing by K:

Note that while the above result shows that Theorem 1 is indeed incorrect, it does not imply that AdaBound might fail to converge.

The results in the previous section suggest that Theorem 1 fails to capture all relevant properties of the bound functions. Although it is indeed possible to show that RT/T→0, it is not clear whether a O(√T) regret rate can be guaranteed for general bound functions.

It turns out that replacing the previous requirements on the bound functions by the assumption that tηl(t)−t−1ηu(t−1)≤M for all t suffices to guarantee a regret of O(√T):

We start from an intermediate result of the original proof of Theorem 4 of Luo et al. (2019):

For the setting in Theorem 3, we have:

We will proceed to bound S1 and S2 from the above Lemma. Starting with S1:

where we used the D∞ bound on the feasible region, and the fact that β1t≤β1 for all t.

The above regret guarantee is similar to the one in Theorem 4 of Luo et al. (2019), except for the term M which accounts for assumption introduced. Note that Theorem 3 does not require ηu(t) to be non-increasing, ηl(t) to be non-decreasing, nor that limt→∞ηu(t)=limt→∞ηl(t).

It is easy to see that the assumption indeed holds for the bound functions in Luo et al. (2019):

For the bound functions

With this in hand, we have the following regret bound for AdaBound:

From the bound in Theorem 3, it follows that:

It is easy to check that the previous results also hold for AMSBound (Algorithm 3 in Luo et al. (2019)), since no assumptions were made on the point-wise behavior of vt.

5 Experiments on AdaBound and SGD

Unfortunately, the regret bound in Corollary 2 is minimized in the limit γ→∞, where AdaBound immediately degenerates to SGD. To inspect whether this fact has empirical value or is just an artifact of the presented analysis, we evaluate the performance of AdaBound when training neural networks on the CIFAR dataset (Krizhevsky, 2009) with an extremely small value for γ parameter.

391 iterations per epoch for a batch size of 128), hence we believe results with considerably smaller/larger values for γ are required to understand its impact on the performance of AdaBound.

. Experiments were done in PyTorch.

Our preliminary results suggest that the final test performance of AdaBound is monotonically increasing with γ – more interestingly, there is no significant difference throughout training between γ=0.001 and γ=100 (for the latter, we have ηl(1)≥0.99 and ηu(1)≤1.01).

To see why AdaBound with γ=100 behaves so differently than SGDM, check that the momentum updates slightly differ between the two: for AdaBound, we have:

where κ∈[0,1) is the dampening factor. The results in Luo et al. (2019) use κ=0, which can cause mt to be larger by a factor of 11−β1=10 compared to AdaBound. In principle, setting κ=β1 in SGDM should yield dynamics similar to AdaBound’s as long as γ is not extremely small.

Figure 1 presents our main empirical results: setting γ=10−10 causes noticeable performance degradation compared to γ=0.001 in AdaBound, as Corollary 2 might suggest. Moreover, setting κ=β1 in SGDM causes a dramatic performance increase throughout training. In particular, it slightly outperforms AdaBound in terms of final test accuracy (94.01% against 93.90%, average over 5 runs), while being comparably fast and consistent in terms of progress during optimization.

We believe SGDM with κ=β1 (which is currently not

the default in either PyTorch or Tensorflow) might be a reasonable alternative to adaptive gradient methods in some settings, as it also requires less computational resources: AdaBound, Adam and SGDM’s updates cost

11d, 9d and 5d float operations, respectively, and their memory costs are 3d, 3d and 2d. Moreover, AdaBound has 5 hyperparameters (α,α∗,β1,β2,γ), while SGDM with κ=β1 has only 2 (α,β1). Studying the effectiveness of ‘dampened’ SGDM, however, requires extensive experiments which are out of the scope of this technical report.

Lastly, we evaluated whether performing bias correction on the κ=β1 form of SGDM affects its performance. More specifically, we divide the learning rate at step t by a factor of 1−βt1

. We observed that bias correction has no significant effect on the average performance, but yields smaller variance: the standard deviation of the final test accuracy over 5 runs decreased from

In this technical report, we identified issues in the proof of the main Theorem of Luo et al. (2019), which presents a regret rate guarantee for AdaBound. We presented an instance where the statement does not hold, and provided a O(√T) regret guarantee under different – and arguably less restrictive – assumptions. Finally, we observed empirically that AdaBound with a theoretically optimal γ indeed yields superior performance, although it degenerates to a specific form of momentum SGD. Our experiments suggest that this form of SGDM (with a dampening factor equal to its momentum) performs competitively to AdaBound on CIFAR.

We are in debt to Rachit Nimavat for proofreading the manuscript and the extensive discussion, and thank Sudarshan Babu and Liangchen Luo for helpful comments.