On the Construction of Knockoffs in Case-Control Studies

Consider a case-control study in which we have a random sample, constructed in such a way that the proportion of cases in our sample is different from that in the general population---for instance, the sample is constructed to achieve a fixed ratio of cases to controls. Imagine that we wish to determine which of the potentially many covariates under study truly influence the response by applying the new model-X knockoffs approach. This paper demonstrates that it suffices to design knockoff variables using data that may have a different ratio of cases to controls. For example, the knockoff variables can be constructed using the distribution of the original variables under any of the following scenarios: (1) a population of controls only; (2) a population of cases only; (3) a population of cases and controls mixed in an arbitrary proportion (irrespective of the fraction of cases in the sample at hand). The consequence is that knockoff variables may be constructed using unlabeled data, which is often available more easily than labeled data, while maintaining Type-I error guarantees. 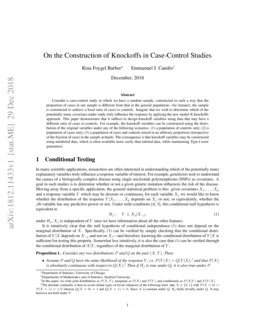 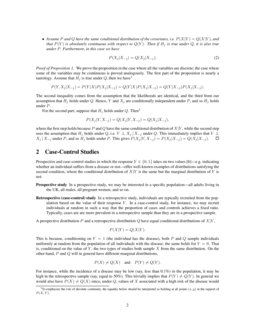 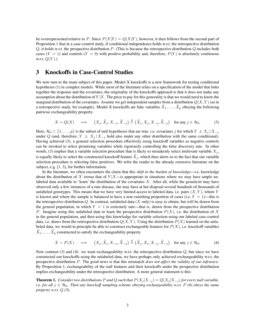 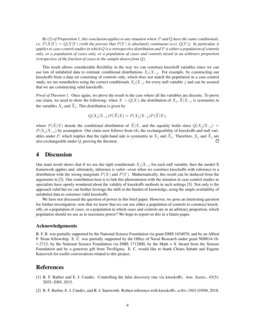 In many scientific applications, researchers are often interested in understanding which of the potentially many explanatory variables truly influence a response variable of interest. For example, geneticists seek to understand the causes of a biologically complex disease using single nucleotide polymorphisms (SNPs) as covariates. A goal in such studies is to determine whether or not a given genetic mutation influences the risk of the disease. Moving away from a specific application, the general statistical problem is this: given covariates

X1,…,Xp and a response variable Y which may be discrete or continuous, for each variable Xj we would like to know whether the distribution of the response Y|X1,…,Xp depends on Xj or not; or equivalently, whether the jth variable has any predictive power or not. Under mild conditions [4, 3]

, this conditional null hypothesis is equivalent to

under Hj, Xj is independent of Y once we have information about all the other features.

Consider any two distributions P and Q on the pair (X,Y). Then:

We prove the proposition in the case where all the variables are discrete; the case where some of the variables may be continuous is proved analogously. The first part of the proposition is nearly a tautology. Assume that Hj is true under Q, then we have333To emphasize the role of absolute continuity, the equality below should be interpreted as holding at all points (x,y) in the support of P(X,Y).

For the second part, suppose that Hj holds under Q. Then3

where the first step holds because P and Q have the same conditional distribution of X|Y, while the second step uses the assumption that Hj holds under Q, i.e.  under Q. This immediately implies that under P, and so Hj holds under P. This gives P(Xj|Y,X−j)=P(Xj|X−j)=Q(Xj|X−j). ∎

Prospective and case-control studies in which the response Y∈{0,1} takes on two values [6]—e.g. indicating whether an individual suffers from a disease or not—offer well-known examples of distributions satisfying the second condition, where the conditional distribution of X|Y is the same but the marginal distribution of Y is not.

In a prospective study, we may be interested in a specific population—all adults living in the UK, all males, all pregnant women, and so on.

This is because, conditioning on Y=1 (the individual has the disease), both P and Q sample individuals uniformly at random from the population of all individuals with the disease; the same holds for Y=0. That is, conditioned on the value of Y, the two types of studies both sample X from the same distribution. On the other hand, P and Q will in general have different marginal distributions,

) with positive probability and, therefore,

We now turn to the main subject of this paper. Model-X knockoffs is a new framework for testing conditional hypotheses (1) in complex models. While most of the literature relies on a specification of the model that links together the response and the covariates, the originality of the knockoffs approach is that it does not make any assumption about the distribution of Y|X. The price to pay for this generality is that we would need to know the marginal distribution of the covariates. Assume we get independent samples from a distribution Q(X,Y) (as in a retrospective study, for example). Model-X knockoffs are fake variables ~X1,…,~Xp obeying the following pairwise exchangeability property:

Here, H0⊂{1,…,p} is the subset of null hypotheses that are true, i.e. covariates j for which under Q (and, therefore, hold also under any other distribution with the same conditional). Having achieved (3), a general selection procedure effectively using knockoff variables as negative controls can be invoked to select promising variables while rigorously controlling the false discovery rate. In other words, (3) implies that a variable selection procedure that is likely to mistakenly select irrelevant variable Xj, is equally likely to select the constructed knockoff feature ˜Xj, which then alerts us to the fact that our variable selection procedure is selecting false positives. We refer the reader to the already extensive literature on the subject, e.g. [1, 3], for further information.

Consider two distributions P and Q such that P(Xj|X−j)=Q(Xj|X−j) for every null variable, i.e. for all j∈H0. Then any knockoff sampling scheme obeying exchangeability w.r.t. P (4) obeys the same property w.r.t. Q (3).

Xj|X−j. For example, by constructing our knockoffs from a data set consisting of controls only, which does not match the population in a case-control study, we are nonetheless using the correct conditionals Xj|X−j for every null variable j and can be assured that we are constructing valid knockoffs.

Once again, we prove the result in the case where all the variables are discrete. To prove our claim, we need to show the following: when X∼Q(X), the distribution of Xj,˜X|X−j is symmetric in the variables Xj and ˜Xj. This distribution is given by

where P(~X|X) denote the conditional distribution of ˜X|X, and the equality holds since Q(Xj|X−j)=P(Xj|X−j) by assumption. Our claim now follows from (4), the exchangeability of knockoffs and null variables under P, which implies that the right-hand side is symmetric in Xj and ˜Xj. Therefore, Xj and ˜Xj are also exchangeable under Q, proving the theorem. ∎

Our main result shows that if we use the right conditionals Xj|X−j for each null variable, then the model-X framework applies and, ultimately, inference is valid—even when we construct knockoffs with reference to a distribution with the wrong marginals P(X) and P(Y). Mathematically, this result can be deduced from the arguments in [2]. Our contribution here is to link this phenomenon with the situation in case-control studies as specialists have openly wondered about the validity of knockoffs methods in such settings [5]. Not only is the approach valid but we can further leverage the shift in the burden of knowledge, using the ample availability of unlabeled data to construct valid knockoffs.

R. F. B. was partially supported by the National Science Foundation via grant DMS 1654076, and by an Alfred P. Sloan fellowship. E. C. was partially supported by the Office of Naval Research under grant N00014-16-1-2712, by the National Science Foundation via DMS 1712800, by the Math + X Award from the Simons Foundation and by a generous gift from TwoSigma. E. C. would like to thank Chiara Sabatti and Eugene Katsevich for useful conversations related to this project.