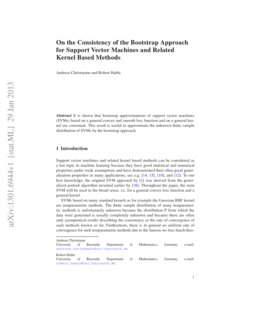 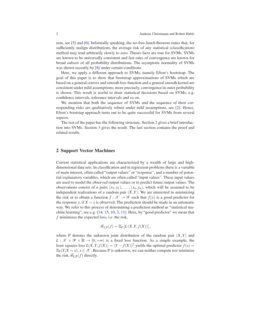 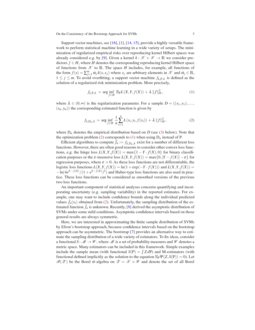 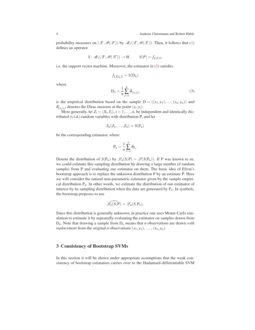 On the stability of bootstrap estimators

It is shown that bootstrap approximations of an estimator which is based...
Andreas Christmann, et al. ∙

On the consistency of Multithreshold Entropy Linear Classifier

Support vector machines and related kernel based methods can be considered as a hot topic in machine learning because they have good statistical and numerical properties under weak assumptions and have demonstrated their often good generalization properties in many applications, see e.g.

Vapnik1995 ; Vapnik1998 , ScSm2002 , and SteinwartChristmann2008a . To our best knowledge, the original SVM approach by BoserGuyonVapnik1992 was derived from the generalized portrait algorithm invented earlier by VapnikLerner1963 . Throughout the paper, the term SVM will be used in the broad sense, i.e. for a general convex loss function and a general kernel.

. Informally speaking, the no-free-lunch theorem states that, for sufficiently malign distributions, the average risk of any statistical (classification) method may tend arbitrarily slowly to zero. Theses facts are true for SVMs. SVMs are known to be universally consistent and fast rates of convergence are known for broad

of all probability distributions. The asymptotic normality of SVMs was shown recently by

Here, we apply a different approach to SVMs, namely Efron’s bootstrap. The goal of this paper is to show that bootstrap approximations of SVMs which are based on a general convex and smooth loss function and a general smooth kernel are consistent under mild assumptions; more precisely, convergence in outer probability is shown. This result is useful to draw statistical decisions based on SVMs, e.g. confidence intervals, tolerance intervals and so on.

We mention that both the sequence of SVMs and the sequence of their corresponding risks are qualitatively robust under mild assumptions, see ChristmannSalibianBarreraVanAelst2013 . Hence, Efron’s bootstap approach turns out to be quite successful for SVMs from several aspects.

The rest of the paper has the following structure. Section 2 gives a brief introduction into SVMs. Section 3 gives the result. The last section contains the proof and related results.

Current statistical applications are characterized by a wealth of large and high-dimensional data sets. In classification and in regression problems there is a variable of main interest, often called “output values” or “response”, and a number of potential explanatory variables, which are often called “input values”. These input values are used to model the observed output values or to predict future output values. The observations consist of

n pairs (x1,y1), …, (xn,yn), which will be assumed to be independent realizations of a random pair (X,Y). We are interested in minimizing the risk or to obtain a function f:X→Y such that f(x) is a good predictor for the response y, if X=x is observed. The prediction should be made in an automatic way. We refer to this process of determining a prediction method as “statistical machine learning”, see e.g. Vapnik1995 ; Vapnik1998 ; ScSm2002 ; CuckerZhou2007 ; SmaleZhou2007 . Here, by “good predictor” we mean that f minimizes the expected loss, i.e. the risk,

denotes the unknown joint distribution of the random pair

Support vector machines, see VapnikLerner1963 , BoserGuyonVapnik1992 , Vapnik1995 ; Vapnik1998 , provide a highly versatile framework to perform statistical machine learning in a wide variety of setups. The minimization of regularized empirical risks over reproducing kernel Hilbert spaces was already considered e.g. by PoggioGirosi1990 . Given a kernel k:X×X→R we consider predictors f∈H, where H denotes the corresponding reproducing kernel Hilbert space of functions from X to R. The space H includes, for example, all functions of the form f(x)=∑mj=1αjk(x,xj) where xj are arbitrary elements in X and αj∈R, 1≤j≤m. To avoid overfitting, a support vector machine fL,P,λ is defined as the solution of a regularized risk minimization problem. More precisely,

the corresponding estimated function is given by

where Dn denotes the empirical distribution based on D (see (2.3) below). Note that the optimization problem (2.2) corresponds to (2.1) when using Dn instead of P.

An important component of statistical analyses concerns quantifying and incorporating uncertainty (e.g. sampling variability) in the reported estimates. For example, one may want to include confidence bounds along the individual predicted values ^fn(xi) obtained from (2.2). Unfortunately, the sampling distribution of the estimated function ^fn is unknown. Recently, Hable2012 derived the asymptotic distribution of SVMs under some mild conditions. Asymptotic confidence intervals based on those general results are always symmetric.

Here, we are interested in approximating the finite sample distribution of SVMs by Efron’s bootstrap approach, because confidence intervals based on the bootstrap approach can be asymmetric. The bootstrap Efron1979 provides an alternative way to estimate the sampling distribution of a wide variety of estimators. To fix ideas, consider a functional S:M→W, where M is a set of probability measures and W denotes a metric space. Many estimators can be included in this framework. Simple examples include the sample mean (with functional S(P)=∫ZdP) and M-estimators (with functional defined implicitly as the solution to the equation EPΨ(Z,S(P))=0). Let B(Z) be the Borel σ-algebra on Z=X×Y and denote the set of all Borel probability measures on (Z,B(Z)) by M1(Z,B(Z)). Then, it follows that (2.1) defines an operator

i.e. the support vector machine. Moreover, the estimator in (2.2) satisfies

is the empirical distribution based on the sample D=((x1,y1),…,(xn,yn)) and δ(xi,yi) denotes the Dirac measure at the point (xi,yi).

, be independent and identically distributed (i.i.d.) random variables with distribution

be the corresponding estimator, where

Since this distribution is generally unknown, in practice one uses Monte Carlo simulation to estimate it by repeatedly evaluating the estimator on samples drawn from Dn. Note that drawing a sample from Dn means that n observations are drawn with replacement from the original n observations (x1,y1), …, (xn,yn).

In this section it will be shown under appropriate assumptions that the weak consistency of bootstrap estimators carries over to the Hadamard-differentiable SVM functional in the sense that the sequence of “conditional random laws” (given (X1,Y1),(X2,Y2),…) of √n(fL,^Pn,λ−fL,Pn,λ) is asymptotically consistent in probability for estimating the laws of the random elements √n(fL,Pn,λ−fL,P,λ). In other words, if n is large, the ”random distribution”

Let X⊂Rd be closed and bounded and let Y⊂R be closed. Assume that k:X×X→R is the restriction of an m-times continuously differentiable kernel ~k:Rd×Rd→R such that m>d/2 and k≠0. Let H be the RKHS of k and let P be a probability distribution on (X×Y,B(X×Y)). Let L:X×Y×R→[0,∞) be a convex, P-square-integrable Nemitski loss function of order p∈[1,∞) such that the partial derivatives

exist for every (x,y,t)∈X×Y×R. Assume that the maps

The conditions on the kernel k in Assumption 3.1 are satisfied for many common kernels, e.g., Gaussian RBF kernel, exponential kernel, polynomial kernel, and linear kernel, but also Wendland kernels kd,ℓ based on certain univariate polynomials pd,ℓ of degree ⌊d/2⌋+3ℓ+1 for ℓ∈N such that ℓ>d/4, see Wendland2005 .

We can now state our result on the consistency of the bootstrap approach for SVMs.

converge in outer probability, where G is a tight Borel-measurable Gaussian process, S′P is a continuous linear operator with

is a continuous linear operator which is invertible.

where Mni is the number of times that Zi is “redrawn” from the original sample Z1,…Zn, M:=(Mn1,…,Mnn) is stochastically independent of Z1,…,Zn and multinomially distributed with parameters n and probabilities 1n,…,1n. If outer expectations are computed, stochastic independence is understood in terms of a product probability space. Let Z1,Z2,… be the coordinate projections on the first ∞ coordinates of the product space (Z∞,B(Z),P∞)×(˜Z,C,Q) and let the multinomial vectors M depend on the last factor only, see (VandervaartWeller1996, , p. 345f).

The following theorem shows (conditional) weak convergence for the empirical bootstrap, where the symbol ⇝ denotes the weak convergence of finite measures. We will need only the equivalence between (i) and (iii) from this theorem and list part (ii) only for the sake of completeness.

Let F be a class of measurable functions with finite envelope function. Define Yn:=n−1/2∑ni=1(MNn,i−1)(δZi−P). The following statements are equivalent:

Here the asterisks denote the measurable cover functions with respect to M, N, and Z1,Z2,… jointly.

in outer probability, with h ranging over the bounded Lipschitz functions, see (VandervaartWeller1996, , p. 378, Formula (3.9.9)). The next theorem shows that under appropriate assumptions, weak consistency of the bootstrap estimators carries over to any Hadamard-differentiable functional in the sense that the sequence of “conditional random laws” (given Z1,Z2,…) of √n(ϕ(^Pn)−ϕ(Pn)) is asymptotically consistent in probability for estimating the laws of the random elements √n(ϕ(Pn)−ϕ(P)), see (VandervaartWeller1996, , p.378).

(Delta-method for bootstrap in probability) Let D and E be normed spaces. Let ϕ:Dϕ⊂D→E be Hadamard-differentiable at P tangentially to a subspace D0. Let Pn and ^Pn be maps as indicated previously with values in Dϕ such that Gn:=√n(Pn−P)⇝G and that (4.11)-(4.12) holds in outer probability, where G is separable and takes its values in D0. Then

As was pointed out by (VandervaartWeller1996, , p. 378), consistency in probability appears to be sufficient for (many) statistical purposes and the theorem above shows this is retained under Hadamard differentiability at the single distribution P.

We now list some results from Hable2012 , which will also be essential for the proof of Theorem 3.2.

Let Assumption 3.1 be satisfied. Then, for every regularizing parameter λ0∈(0,∞), there is a tight, Borel-measurable Gaussian process H:Ω→H, ω→H(ω), such that

is a continuous linear operator which is invertible.

The proof relies on the application of Theorem 4.2. Hence, we have to show the following steps:

Step 1.  To apply Theorem 4.2, we first have to specify the considered spaces D, E, Dϕ, D0 and the map ϕ. As in Hable2012 we use the following notations. Because L is a P-square-integrable Nemitski loss function of order p∈[1,∞), there is a function b∈L2(P) such that

is the set of all indicator functions I(−∞,z],

Now let ℓ∞(G) be the set of all bounded functions F:G→R with norm ∥F∥∞=supg∈G|F(g)|. Define

the closed linear span of BS in ℓ∞(G). That is, BS is a subset of ℓ∞(G) whose elements correspond to finite measures. Hence probability measures are covered as special cases. The elements of BS can be interpreted as some kind of generalized distributions functions, because G1⊂G. The assumptions on L and P imply that G→R, g↦∫gdP is a well-defined element of BS. For every F∈BS, let ι(F) denote the corresponding finite measure on (X×Y,B(X×Y)) such that F(g)=∫gdμ for all g∈G. Note that the map ι is well-defined, because by definition of BS, ι(F) uniquely exists for every F∈BS.

With these notations, we will apply Theorem 4.2 for

At first glance this definition of S seems to be somewhat technical. However, this will allow us to use a functional delta method for bootstrap estimators of SVMs with regularization parameter λ=λ0∈(0,∞).

Since a σ-compact set in a metric space is separable, separability of a random variable is slightly weaker than tightness, see (VandervaartWeller1996, , p. 17). Therefore, G in our Theorem 3.2 is indeed separable.

Step 2.  Theorem 4.4 showed that the map S indeed satisfies the necessary Hadamard-differentiability in the point P:=ι−1(F).

converges in outer probability to zero and ^Gn is asymptotically measurable.

However, we will prove a somewhat stronger result, namely that G is a P-Donsker class and P∗∥g−Pg∥2G<∞, which is part (i) of Theorem 4.1, and then part (iii) of Theorem 4.1 yields, that the term in (4.28) converges even outer almost surely to zero and the sequence

converges almost surely to zero for every h∈BL1.

Because G is a P-Donsker class, it remains to show that P∗∥g−Pg∥2G<∞. Due to

and G=G1∪G2∪G3, we obtain the inequality

Therefore, the sum on the right hand side in (4.31) is finite and thus the assumption P∗∥g−Pg∥2G<∞ is satisfied. This yields by part (iii) of Theorem 4.1 that suph∈BL1∣∣EMh(^Gn)−Eh(G)∣∣ converges outer almost surely to zero and the sequence

converges almost surely to zero for every h∈BL1, where the asterisks denote the measurable cover functions with respect to M and Z1,Z2,… jointly.