On the complexity of structure and substructure connectivity of graphs 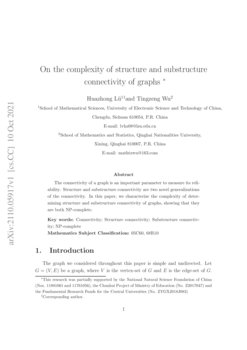 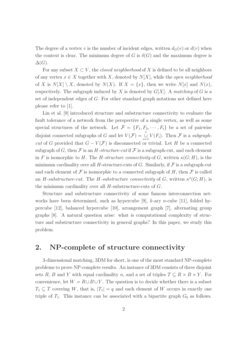 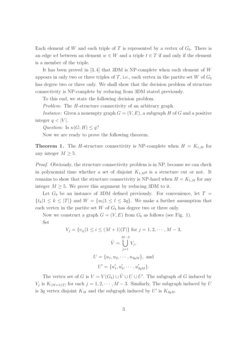 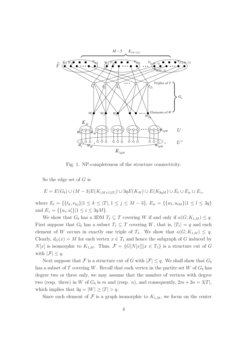 The graph we considered throughout this paper is simple and undirected. Let G=(V,E) be a graph, where V is the vertex-set of G and E is the edge-set of G. The degree of a vertex v is the number of incident edges, written dG(v) or d(v) when the context is clear. The minimum degree of G is δ(G) and the maximum degree is Δ(G).

Lin et al. [9] introduced structure and substructure connectivity to evaluate the fault tolerance of a network from the perspective of a single vertex, as well as some special structures of the network. Let F={F1,F2,⋯,Ft} be a set of pairwise disjoint connected subgraphs of G and let V(F)=t∪i=1V(Fi). Then F is a subgraph-cut of G provided that G−V(F) is disconnected or trivial. Let H be a connected subgraph of G, then F is an H-structure-cut if F is a subgraph-cut, and each element in F is isomorphic to H. The H-structure connectivity of G, written κ(G;H), is the minimum cardinality over all H-structure-cuts of G. Similarly, if F is a subgraph-cut and each element of F is isomorphic to a connected subgraph of H, then F is called an H-substructure-cut. The H-substructure connectivity of G, written κs(G;H), is the minimum cardinality over all H-substructure-cuts of G.

3-dimensional matching, 3DM for short, is one of the most standard NP-complete problems to prove NP-complete results. An instance of 3DM consists of three disjoint sets R, B and Y with equal cardinality n, and a set of triples T⊆R×B×Y. For convenience, let W=R∪B∪Y. The question is to decide whether there is a subset T1⊆T covering W, that is, |T1|=q and each element of W occurs in exactly one triple of T1. This instance can be associated with a bipartite graph Gb as follows. Each element of W and each triple of T is represented by a vertex of Gb. There is an edge wt between an element w∈W and a triple t∈T if and only if the element is a member of the triple.

It has been proved in [3, 4] that 3DM is NP-complete when each element of W appears in only two or three triples of T, i.e., each vertex in the partite set W of Gb has degree two or three only. We shall show that the decision problem of structure connectivity is NP-complete by reducing from 3DM stated previously.

To this end, we state the following decision problem.

Problem: The H-structure connectivity of an arbitrary graph.

Instance: Given a nonempty graph G=(V,E), a subgraph H of G and a positive integer q<|V|.

Now we are ready to prove the following theorem.

. The H-structure connectivity is NP-complete when H=K1,M for any integer M≥5.

Let Gb be an instance of 3DM defined previously. For convenience, let T={tk|1≤k≤|T|} and W={wl|1≤l≤3q}. We make a further assumption that each vertex in the partite set W of Gb has degree two or three only.

So the edge set of G is

Next suppose that F is a structure cut of G with |F|≤q. We shall show that Gb has a subset of T covering W. Recall that each vertex in the partite set W of Gb has degree two or three only, we may assume that the number of vertices with degree two (resp. three) in W of Gb is m and (resp. n), and consequently, 2m+3n=3|T|, which implies that 3q=|W|≥|T|>q.

Since each element of F is a graph isomorphic to K1,M, we focus on the center vertex of K1,M∈F. Let S be the the set of center vertices of all K1,M∈F, and let S∩Gb=S′ and S′′=S∩(^V∪U∪U′). Since each vertex in W has degree less than M, any vertex in W can not be center vertices of K1,M∈F that is, S∩W=∅. We claim that F covers W. Suppose on the contrary that F does not cover W, we shall show that G−V(F) is connected. Thus, two cases arise.

Case 1. S′′=∅. So S=S′. If there exists an edge wt∈E(G−V(F)) such that w∈W and t∈T, then it is not hard to see that G−V(F) is connected, contradicting that F is a structure cut of G. Hence, all vertices in W are covered by V(F). Clearly, components in F restricted on Gb form a 3-dimensional matching of Gb.

Since S′′≠∅, we have |S′|<q<|T|. This implies that there exists an edge ab∈E(G−V(F)) such that a∈T and b∈W. Obviously, after subverting vertices in ^V, each clique K(M+1)|T| either joins to a or disappears, and similarly clique K3qM is decidedly joined to b via one clique KM that b joins. So G−V(F) is connected, a contradiction again.

This complete the proof. ∎

We present the decision problem of the substructure connectivity as follows.

Problem: The substructure connectivity of an arbitrary graph.

Instance: Given a nonempty graph G=(V,E) with Δ(G)=M, a subgraph H of G and a positive integer k<|V|.

The following lemma will be used later.

So the edge set of G is

Since each element of F is a subgraph of K1,M, we focus on the center vertex of Fi∈F for 1≤i≤k (since each center vertex of K1,M covers all its neighbors). Let S be the set of center vertices of Fi∈F, 1≤i≤k, and let S∩V=S′. Thus, two cases arise.

Case 2. V⊈V(F). Then V′=V∖V(F)≠∅. Since there are k+2 disjoint cliques of size k+2 in G′, each Fi (1≤i≤k) with center vertices in S′ could subvert at most |S′| vertices in each K|V|. Thus, the remaining subgraph of G′−V(F) consists of at least two cliques of size at least |V|−|S′| and the vertices in separate cliques are not adjacent. It implies that G′−V(F) is connected and not a complete graph, which is a contradiction.