On the complexity of convex inertial proximal algorithms

The inertial proximal gradient algorithm is efficient for the composite optimization problem. Recently, the convergence of a special inertial proximal gradient algorithm under strong convexity has been also studied. In this paper, we present more novel convergence complexity results, especially on the convergence rates of the function values. The non-ergodic O(1/k) rate is proved for inertial proximal gradient algorithm with constant stepzise when the objective function is coercive. When the objective function fails to promise coercivity, we prove the sublinear rate with diminishing inertial parameters. When the function satisfies some condition (which is much weaker than the strong convexity), the linear convergence is proved with much larger and general stepsize than previous literature. We also extend our results to the multi-block version and present the computational complexity. Both cyclic and stochastic index selection strategies are considered. 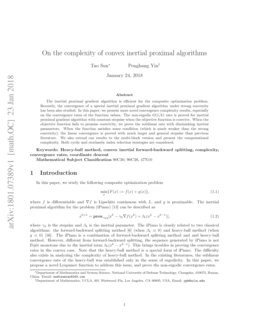 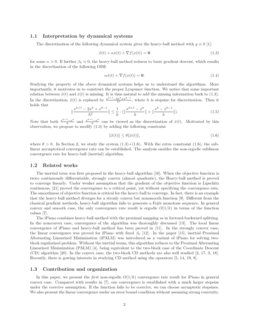 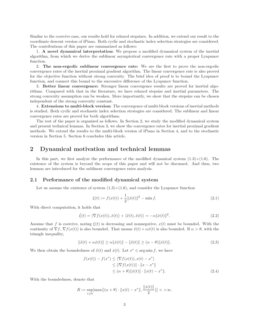 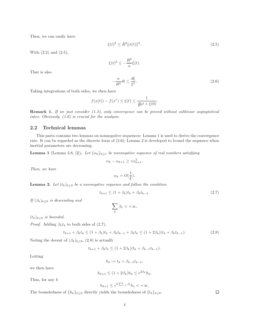 On the Proximal Gradient Algorithm with Alternated Inertia

In this paper, we investigate the attractive properties of the proximal ...
Franck Iutzeler, et al. ∙

In this paper, we characterize data-time tradeoffs of the proximal-gradi...
Xiao Lv, et al. ∙

In this paper, we study the following composite optimization problem

where f is differentiable and ∇f is Lipschitz continuous with L, and g is proximable. The inertial proximal algorithm for the problem (iPiano) [13] can be described as

The discretization of the following dynamical system gives the heavy-ball method with g≡0 [1]:

for some α>0. If further βk≡0, the heavy-ball method reduces to basic gradient descent, which results in the discretization of the following ODE

Studying the property of the above dynamical systems helps us to understand the algorithms. More importantly, it motivates us to construct the proper Lyapunov function. We notice that some important relation between ¨x(t) and ˙x(t) is missing. It is thus natural to add the missing information back to (1.3). In the discretization, ¨x(t) is replaced by xk+1−2xk+xk−1h2, where h is stepsize for discretization. Then it holds that

Note that both xk+1−xkh and xk+1−xkh can be viewed as the discretization of ˙x(t). Motivated by this observation, we propose to modify (1.3) by adding the following constraint

where θ>0. In Section 2, we study the system (1.3)+(1.6). With the extra constraint (1.6), the sublinear asymptotical convergence rate can be established. The analysis enables the non-ergodic sublinear convergence rate for heavy-ball (inertial) algorithm.

The iPiano combines heavy-ball method with the proximal mapping as in forward-backward splitting. In the nonconvex case, convergence of the algorithm was thoroughly discussed [13]. The local linear convergence of iPiano and heavy-ball method has been proved in [11]. In the strongly convex case, the linear convergence was proved for iPiano with fixed βk [12]. In the paper [15], inertial Proximal Alternating Linearized Minimization (iPALM) was introduced as a variant of iPiano for solving two-block regularized problem. Without the inertial terms, this algorithm reduces to the Proximal Alternating Linearized Minimization (PALM) [4], being equivalent to the two-block case of the Coordinate Descent (CD) algorithm [20]. In the convex case, the two-block CD methods are also well studied [2, 17, 3, 18]. Recently, there is gowing interests in studying CD method using the operators [5, 14, 19, 8].

In this paper, we present the first non-ergodic O(1/k) convergence rate result for iPiano in general convex case. Compared with results in [7], our convergence is established with a much larger stepsize under the coercive assumption. If the function fails to be coercive, we can choose asymptotic stepsizes. We also present the linear convergence under an error bound condition without assuming strong convexity. Similar to the coercive case, our results hold for relaxed stepsizes. In addition, we extend our result to the coordinate descent version of iPiano. Both cyclic and stochastic index selection strategies are considered. The contributions of this paper are summarized as follows:

1. A novel dynamical interpretation: We propose a modified dynamical system of the inertial algorithm, from which we derive the sublinear asymptotical convergence rate with a proper Lyapunov function.

The rest of the paper is organized as follows. In Section 2, we study the modified dynamical system and present technical lemmas. In Section 3, we show the convergence rates for inertial proximal gradient methods. We extend the results to the multi-block version of iPiano in Section 4, and to the stochastic version in Section 5. Section 6 concludes this article.

In this part, we first analyze the performance of the modified dynamical system (1.3)+(1.6). The existence of the system is beyond the scope of this paper and will not be discussed. And then, two lemmas are introduced for the sublinear convergence rates analysis.

2.1 Performance of the modified dynamical system

Let us assume the existence of system (1.3)+(1.6), and consider the Lyapunov function

With direct computation, it holds that

Assume that f is coercive, noting ξ(t) is decreasing and nonnegative, x(t) must be bounded. With the continuity of ∇f, ∇f(x(t)) is also bounded. That means ¨x(t)+α˙x(t) is also bounded. If α>θ, with the triangle inequality,

We then obtain the boundedness of ¨x(t) and ˙x(t). Let x∗∈argminf, we have

With the boundedness, denote that

Then, we can easily have

Taking integrations of both sides, we then have

If we just consider (1.3), only convergence can be proved without sublinear asymptotical rates. Obviously, (1.6) is crucial for the analysis.

This parts contains two lemmas on nonnegative sequences: Lemma 1 is used to derive the convergence rate. It can be regarded as the discrete form of (2.6); Lemma 2 is developed to bound the sequence when inertial parameters are decreasing.

If (βk)k≥0 is descending and

Thus, for any k

In this section, we prove convergence rates of iPiano. The core of the proof is to construct a proper Lyapunov function.

Suppose f is a convex function with L-Lipschitz gradient and g is convex, and minF>−∞. Let (xk)k≥0 be generated by the inertial proximal gradient algorithm with non-increasing (βk)k≥0⊆[0,1). Choosing the step size

for arbitrary fixed 0<c<1, we have

With the convexity of g, we have

With Lipschitz continuity of ∇f,

where a) uses the Schwarz inequality ⟨xk−xk−1,xk+1−xk⟩≤12∥xk−xk−1∥2+12∥xk+1−xk∥2. With direct calculations, we then obtain

We employ the following Lyapunov function

Function (3.7) can be regarded as the discretization of (2.1). We present a very useful technique lemma which is the key to results.

Suppose the conditions of Lemma 3 hold. Let ¯¯¯¯¯xk denote the projection of xk onto \emphargminF, assumed to exist, and define

With direct computation and Lemma 3, we have

The convexity of g yields

In this subsection, we present the sublinear of the convex iPiano. The coercivity of the function is critical for the analysis. If F is coercive, the parameter βk can be bounded from 0; however, if F fails to be promised to be coercive, βk must be descending to zero. Thus, this subsection will be divided into two parts in term of the coercivity.

First, we present the non-ergodic O(1k) convergence rate of the function value. The rate can be derived if (βk)k≥0 is bounded from 0 and 1.

Assume the conditions of Lemma 3 hold, and

By Lemma 4, we then have

Using the fact F(xk)−minF≤ξk, we then prove the result. ∎

To the best of our knowledge, this is the first time to prove the non-ergodic O(1k) convergence rate in the perspective of function values for iPiano and heavy-ball method in the convex case.

In this case, to obtain the boundedness of the sequence (xk)k≥0, we must employ diminishing βk, i.e., limkβk=0. The following lemma can derive the needed boundedness.

Suppose the conditions of Lemma 3 hold, and

where θ>1. Let (xk)k≥0 be generated by the inertial proximal gradient algorithm algorithm, then, (xk)k≥0 is bounded.

First, we prove that ⋅−γk∇f(⋅) is a contractive operator. For any x,y,

Let x∗ be a minimizer of F. Obviously, it holds

With Lemma 2, we then prove the result. ∎

Now, we are prepared to present the O(1/k) rate of the function values when F is not coercive.

Suppose the conditions of Lemma 5 hold. Let (xk)k≥0 be generated by the inertial proximal gradient algorithm algorithm, then we have

We say that the function F satisfies the optimal strong convexity condition, if

where ¯¯¯x is the projection of x onto the set argminF, and ν>0. This condition is much weaker than the strong convexity.

Suppose the conditions of Theorem 1 hold, and F satisfies (3.19). Then we have

With Lemma 4, we then derive

With the assumption, supk{εk(1δk+2ν)}<+∞, and the bound is assumed as ℓ>0. And then, we have the following result,

This part analyzes the cyclic coordinate inertial proximal algorithm. The two-block version is proposed in [15], which focuses on the nonconvex case. Here, we consider the multi-block version and prove its convergence rate under convexity assumption. The minimization problem can be described as

The cyclic coordinate descent inertial algorithm runs as: for i from 1 to m,

where γk,i,βk,i>0. The iPALM can be regarded as the two-block case of this algorithm. The function H is assumed to satisfy

The proof is similar to [Lemma 1.2.3,[10]] and will not be reproduced. In the following part of this paper, we use the following assumption

for arbitrary fixed 0<c<1. Then, we can obtain

With the convexity of gi, we have