On the CNF encoding of cardinality constraints and beyond

In this report, we propose a quick survey of the currently known techniques for encoding a Boolean cardinality constraint into a CNF formula, and we discuss about the relevance of these encodings. We also propose models to facilitate analysis and design of CNF encodings for Boolean constraints. 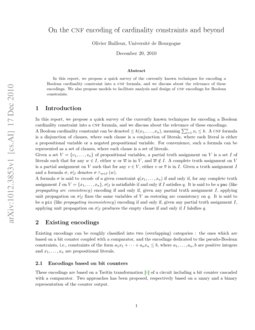 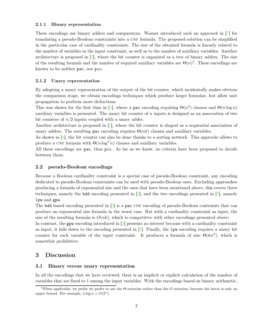 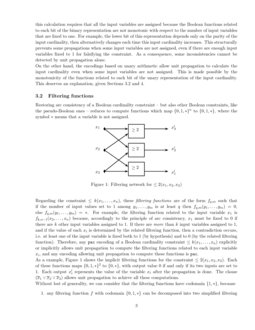 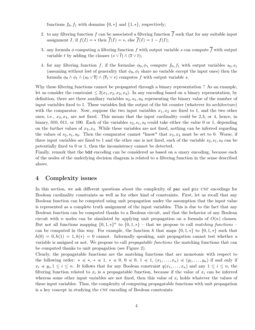 In this report, we propose a quick survey of the currently known techniques for encoding a Boolean cardinality constraint into a cnf formula, and we discuss about the relevance of these encodings.

Existing encodings can be roughly classified into two (overlapping) categories : the ones which are based on a bit counter coupled with a comparator, and the encodings dedicated to the pseudo-Boolean constraints, i.e., constraints of the form

2.1 Encodings based on bit counters

These encodings are based on a Tseitin transformation [6] of a circuit including a bit counter cascaded with a comparator. Two approaches has been proposed, respectively based on a unary and a binary representation of the counter output.

These encodings use binary adders and comparators. Warner introduced such an approach in [7] for translating a pseudo-Boolean constraints into a cnf formula. The proposed solution can be simplified in the particular case of cardinality constraints. The size of the obtained formula is linearly related to the number of variables in the input constraint, as well as to the number of auxiliary variables. Another architecture is proposed in [5], where the bit counter is organized as a tree of binary adders. The size of the resulting formula and the number of required auxiliary variables are Θ(n)111 When applicable, we prefer we prefer to use the Θ notation rather than the O notation, because the latter is only an upper bound. For example, nlogn=O(2n).. These encodings are known to be neither pac, nor pic.

By adopting a unary representation of the output of the bit counter, which incidentally makes obvious the comparison stage, we obtain encodings techniques which produce larger formulae, but allow unit propagation to perform more deductions.

This was shown for the first time in [1], where a pac encoding requiring Θ(n2) clauses and Θ(nlogn) auxiliary variables is presented. The unary bit counter of n inputs is designed as an association of two bit counters of n/2 inputs coupled with a unary adder.

Another architecture is proposed in [5], where the bit counter is shaped as a sequential association of unary adders. The resulting pac encoding requires Θ(nk) clauses and auxiliary variables.

As shown in [4], the bit counter can also be done thanks to a sorting network. This approche allows to produce a cnf formula with Θ(nlog2n) clauses and auxiliary variables.

All these encodings are pac, then pic. As far as we know, no criteria have been proposed to decide between them.

The bdd based encoding presented in [2] is a pac cnf encoding of pseudo-Boolean contraints that can produce an exponential size formula in the worst case. But with a cardinality constraint as input, the size of the resulting formula is O(nk), which is competitive with other encodings presented above.

In contrast, the gpw encoding introduced in [3] presents no interest because with a cardinality constraint as input, it falls down to the encoding presented in [1]. Finally, the lpw encoding requires a unary bit counter for each variable of the input constraint. It produces a formula of size Θ(kn2), which is somewhat prohibitive.

In all the encodings that we have reviewed, there is an implicit or explicit calculation of the number of variables that are fixed to 1 among the input variables. With the encodings based on binary arithmetic, this calculation requires that all the input variables are assigned because the Boolean functions related to each bit of the binary representation are not monotonic with respect to the number of input variables that are fixed to one. For example, the lower bit of this representation depends only on the parity of the input cardinality, then alternatively changes each time this input cardinality increases. This structurally prevents some propagations when some input variables are not assigned, even if there are enough input variables fixed to 1 for falsifying the constraint. As a consequence, some inconsistencies cannot be detected by unit propagation alone.

On the other hand, the encodings based on unary arithmetic allow unit propagation to calculate the input cardinality even when some input variables are not assigned. This is made possible by the monotonicity of the functions related to each bit of the unary representation of the input cardinality. This deserves an explanation, given Sections 3.2 and 4.

Restoring arc consistency of a Boolean cardinality constraint – but also other Boolean constraints, like the pseudo-Boolean ones – reduces to compute functions which map {0,1,∗}n to {0,1,∗}, where the symbol ∗ means that a variable is not assigned.

As a example, Figure 1 shows the implicit filtering functions for the constraint ≤2(x1,x2,x3). Each of these functions maps {0,1,∗}2 to {0,∗}, with output value 0 if and only if its two inputs are set to 1. Each output x′i represents the value of the variable xi after the propagation is done. The clause (¯¯¯x1∨¯¯¯x2∨¯¯¯x3) allows unit propagation to achieve all these computations.

Without lost of generality, we can consider that the filtering functions have codomain {1,∗}, because

Why these filtering functions cannot be propagated through a binary representation ? As an example, let us consider the constraint ≤2(x1,x2,x3,x4). In any encoding based on a binary representation, by definition, there are three auxiliary variables u2,u1,u0 representing the binary value of the number of input variables fixed to 1. These variables link the output of the bit counter (whatever its architecture) with the comparator. Now, suppose the two input variables x1,x2 are fixed to 1, and the two other ones, i.e., x3,x4, are not fixed. This means that the input cardinality could be 2,3, or 4, hence, in binary, 010, 011, or 100. Each of the variables s2,s1,s0 could take either the value 0 or 1, depending on the further values of x3,x4. While these variables are not fixed, nothing can be inferred regarding the values of s2,s1,s0. Then the comparator cannot "know" that x3,x4 must be set to 0. Worse, if three input variables are fixed to 1 and the other one is not fixed, each of the variable s2,s1,s0 can be potentially fixed to 0 or 1, then the inconsistency cannot be detected.

Finally, remark that the bdd encoding can be considered as based on a unary encoding, because each of the nodes of the underlying decision diagram is related to a filtering function in the sense described above.

In this section, we ask different questions about the complexity of pac and pic cnf encodings for Boolean cardinality constraints as well as for other kind of constraints. First, let us recall that any Boolean function can be computed using unit propagation under the assumption that the input value is represented as a complete truth assignment of the input variables. This is due to the fact that any Boolean function can be computed thanks to a Boolean circuit, and that the behavior of any Boolean circuit with n nodes can be simulated by applying unit propagation on a formula of O(n) clauses. But not all functions mapping {0,1,∗}n to {0,1,∗} – that we propose to call matching functions – can be computed in this way. For example, the function h that maps {0,1,∗} to {0,1,∗} such that h(0)=0,h(1)=1,h(∗)=0 cannot. Informally speaking, unit propagation cannot test whether a variable is assigned or not. We propose to call propagatable functions the matching functions that can be computed thanks to unit propagation (see Figure 2).

Clearly, the propagatable functions are the matching functions that are monotonic with respect to the following order: ∗≼∗, ∗≼1, ∗≼0, 0≼0, 1≼1, (x1,…,xn)≼(y1,…,yn) if and only if xi≼yi,1≤i≤n. It follows that for any Boolean constraint q(x1,…,xn) and any 1≤i≤n, the filtering function related to xi is a propagatable function, because if the value of xi can be inferred whereas some other input variables are not fixed, then this value of xi holds whatever the values of these input variables. Thus, the complexity of computing propagatable functions with unit propagation is a key concept in studying the cnf encoding of Boolean constraints.

Now, let us present the critical issues regarding the search for efficient encodings. The following questions are relevant for Boolean cardinality constraints, but can be generalized to other constraints on Boolean variables, such as pseudo-Boolean constraints.

There are at least three research ways in the field of cnf encoding of Boolean (including cardinality) constraints. The first direction is the research for theoretical models that would facilitate the design and the analysis of encodings. The second one concerns the research for inference rules and filtering techniques that would allow sat solvers to achieve the same deductions with binary encodings as the current solvers do with unary encodings. And the last research area is a fine study of the respective inference powers and efficiencies of sat and pseudo-Boolean solvers regarding the problems which can be represented with the two formalisms.

A way to design propositional encodings is to start from a Boolean circuit, then use a Tseitin transformation to produce the corresponding formula. Indeed, all the encodings presented in section 2 can be represented as Boolean circuits. This representation is suitable for designing correct encodings and for proving the correctness of encodings. But it does not model the behavior of unit propagation alone, especially when some variables are not assigned.

With this simple modification, which supposes to inform the sat solver of the default values of the involved variables, the binary based encodings for cardinality constraints become pic, allowing to increase the amount of deductions performed by the solver. Thanks to such an informed unit propagation rule, we can expect more compact pic and pac encodings.

The question deserves a comparative study of existing sat and pseudo-Boolean solvers, with the same problem instances and all the known encodings of pseudo-Boolean and cardinality constraints. If it turns out that in some cases sat

solvers are better, it will be relevant to investigate the reason for such a difference: learning strategy, branching heuristic, filtering efficiency… in order to be able to design a pseudo-Boolean solver which covers efficiently the scope of the

Appendix A Reducing a cnf formula to a monotone circuit

To each filtering function f(x1,…,xn) with domain {1,∗} can be associated a Boolean function fB(x+1,x−1,…,x+n,x−n) with the convention introduced Section 5.1. Our aim is to prove that if f can be computed using unit propagation on a satisfiable formula ϕ of size m, then fB can be computed by a monotone Boolean circuit of size O(m).

Without lost of generality, we want to prove that for any function f mapping {0,1,∗}n to {1,∗}, if there is a cnf formula ϕ allowing unit propagation to compute f, then there is a monotone circuit which computes fB.

Such a circuit can be built based on the following principle: all the deductions unit propagations can do regarding a given literal w, and then the corresponding Boolean variable δ(w), involve only the clauses containing w. Let Q be the set of these clauses.

Clearly, the following part of circuit Cw computes the value of δ(w) with respect to the variables which it depends.

Bringing together the circuit parts Cw, for any literal w occurring in ϕ, produces a monotone circuit with loops. These loops (if applicable) are not involved during the unit propagation process because the only deductions they allow can only fix a literal to a value it has already. They can therefore be suppressed by removing the links between any output u of a or gate and any input of a and gate involved in the computation of u.

The resulting circuit, which can include unnecessary parts, can simulate any deduction performed by unit propagation on ϕ with respect to the values of the input variables x1,…,xn.