We define a novel class of distances between statistical multivariate distributions by solving an optimal transportation problem on their marginal densities with respect to a ground distance defined on their conditional densities. By using the chain rule factorization of probabilities, we show how to perform optimal transport on a ground space being an information-geometric manifold of conditional probabilities. We prove that this new distance is a metric whenever the chosen ground distance is a metric. Our distance generalizes both the Wasserstein distances between point sets and a recently introduced metric distance between statistical mixtures. As a first application of this Chain Rule Optimal Transport (CROT) distance, we show that the ground distance between statistical mixtures is upper bounded by this optimal transport distance, whenever the ground distance is joint convex. We report on our experiments which quantify the tightness of the CROT distance for the total variation distance and a square root generalization of the Jensen-Shannon divergence between mixtures. 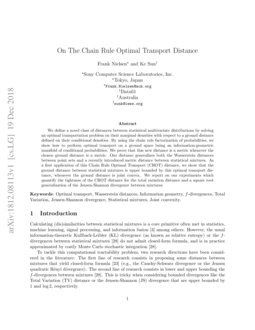 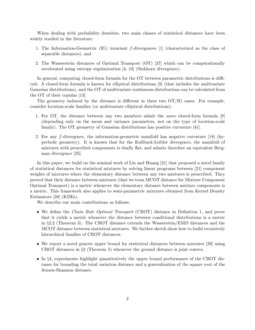 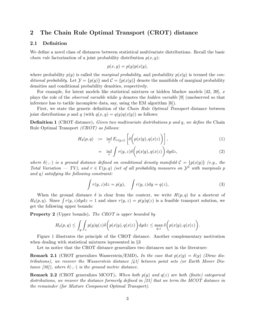 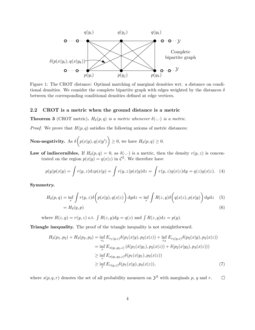 [3] among others. However, the usual information-theoretic Kullback-Leibler (KL) divergence (as known as relative entropy) or the f-divergences between statistical mixtures [28] do not admit closed-form formula, and is in practice approximated by costly Monte Carlo stochastic integration [28].

To tackle this computational tractability problem, two research directions have been considered in the literature: The first line of research consists in proposing some distances between mixtures that yield closed-form formula [23] (e.g., the Cauchy-Schwarz divergence or the Jensen quadratic Rényi divergence). The second line of research consists in lower and upper bounding the f-divergences between mixtures [28]. This is tricky when considering bounded divergences like the Total Variation (TV) distance or the Jensen-Shannon (JS) divergence that are upper bounded by 1 and log2, respectively.

When dealing with probability densities, two main classes of statistical distances have been widely studied in the literature:

The geometry induced by the distance is different in these two OT/IG cases. For example, consider location-scale families (or multivariate elliptical distributions):

In this paper, we build on the seminal work of Liu and Huang [21]

We describe our main contributions as follows:

We define a novel class of distances between statistical multivariate distributions. Recall the basic chain rule

factorization of a joint probability distribution

For example, for latent models like statistical mixtures or hidden Markov models

[42, 39], x plays the role of the observed variable while y denotes the hidden variable [9] (unobserved so that inference has to tackle incomplete data, say, using the EM algorithm [6]).

First, we state the generic definition of the Chain Rule Optimal Transport

where δ(⋅,⋅) is a ground distance defined on conditional density manifold C={p(x|y)} (e.g., the Total Variation — TV), and r∈Γ(p,q) (set of all probability measures on Y2 with marginals p and q) satisfying the following constraint:

When the ground distance δ is clear from the context, we write H(p,q) for a shortcut of Hδ(p,q). Since ∫r(y,z)dydz=1 and since r(y,z)=p(y)q(z) is a feasible transport solution, we get the following upper bounds:

The CROT is upper bounded by

Figure 1 illustrates the principle of the CROT distance. Another complementary motivation when dealing with statistical mixtures ispresented in §3

Let us notice that the CROT distance generalizes two distances met in the literature:

In the case that p(x|y)=δ(y) (Dirac distributions), we recover the Wasserstein distance [41] between point sets (or Earth Mover Distance [36]), where δ(⋅,⋅) is the ground metric distance.

When both p(y) and q(z) are both (finite) categorical distributions, we recover the distance formerly defined in [21] that we term the MCOT distance in the remainder (for Mixture Component Optimal Transport).

We prove that H(p,q) satisfies the following axioms of metric distances:

The proof of the triangle inequality is not straightforward.

where s(p,q,r) denotes the set of all probability measures on Y3 with marginals p, q and r. ∎

When the ground distance δ is asymmetric, we shall use the ’:’ notation instead of the ’,’ notation for separating arguments.

In general, the LP problem (with k1×k2 variables and inequalities, k1+k2 equalities whom k1+k2−1 are independent) delivers an optimal soft assignment of mixture components with exactly k1+k2−1 nonzero coefficients111A LP in d-dimensions has its solution located at a vertex of a polytope, described by the intersection of d+1hyperplanes (linear constraints). in matrix W=[wij]. The complexity of linear programming in n variables with b bits using Karmarkar’s interior point methods is polynomial, in O(n72b2) [19].

Observe that we necessarily have:

We can interpret MCOT as a discrete optimal transport between (non-embedded) histograms. When k1=k2=d, the transport polytope is the polyhedral set of non-negative d× matrices:

where ⟨A,B⟩=tr(A⊤B) is the Fröbenius inner product of matrices, and tr(A) the matrix trace. This OT can be calculated using the network simplex in O(d3logd) time.

Cuturi [5] showed how to relax the objective function in order to get fast calculation using the Sinkhorn divergence:

Because the minimization is performed on Uλ(α,β)⊂U(α,β), we have

First, let us report the basic upper bounds for MCOT mentioned earlier in Property 2. The objective function is upper bounded by:

Now, when the conditional density distance δ is separate convex (i.e., meaning convex in both arguments), we get the following Separate Convexity Upper Bound (SCUB):

For example, norm-induced distances or f-divergences [26] are separate convex distances.

For the particular KL divergence

Since this holds for any permutation of σ of mixture components, we can tight this upper bound by minimizing over all permutations:

Then it follows that

In fact, the CROT distance provides a good upper bound on the distance between mixtures provided the base distance δ is joint convex [2, 33].

A distance D(⋅:⋅) is joint convex if and only if

The f-divergences If(p:q)=∫p(x)f(q(x)/p(x))dx (for a convex generator f(u) satisfying f(1)=0) are joint convex distances [31]. For mixtures with same weights but different component basis and a joint convex distance D (e.g., KL), we get D(∑ki=1wipi:∑ki=1wiqi)≤∑ki=1αiD(pi:qi).

Notice that Hδ(m1,m2)≠Hδ(m2,m1) for asymmetric base distance δ.

Figure 2 illustrates the CROT distance between statistical mixtures (not having the same number of components).

Since TV is a metric f-divergence [17] bounded in [0,1], so is MCOT. The closed-form formula for the total variation between univariate Gaussian distributions is reported in [24]

(using the erf function), and the other formula for the total variation between Rayleigh distributions and Gamma distributions is given in

Figure 2(a) illustrates the performances of the various lower/upper bounds on the total variation between mixtures of Gaussian, Gamma, and Rayleigh distributions with respect to the true value which is estimated using Monte Carlo samplings.

The acronyms of the various bounds are as follows:

. We used the Expectation-Maximization (EM) algorithm implementation of

We approximate the TV between D-dimensional GMMs using Monte Carlo by performing stochastic integration of the following integrals: Let r(x)=p(x)+q(x)2,

Our experiments yield the following observations: As the sample size τ decreases, the TV distances between GMMs turn larger because the GMMs are pulled towards the two different empirical distributions. As the dimension D increases, TV increases because in a high dimensional space the GMM components are less likely to overlap. We check that CROT-TV is an upper bound of TV. We verify that Sinkhorn divergences are upper bounds of CROT.

TV is bounded in [0,1] which makes it difficult to appreciate the quality of the CROT upper bounds in general. We shall consider a different parametric distance Dα that is upper bounded by an arbitrary bound: Dα(p,q)≤Cα.

. A nice property is that the skew

K-divergence is upper bounded as follows:

Thus, we have the square root of the symmetrized α-divergence that is upper bounded by

However, √JSα[p:q] is not a metric in general [31]. Indeed, in the extreme case of α=1, it is known that any positive power of the Jeffreys divergence does not yield a metric.

Figure 2(b) displays the experimental results obtained for the α-JS divergences.

In this work, we defined the generic Chain Rule Optimal Transport (CROT) distance (Definition 1) Hδ for a ground distance δ that encompasses the Wasserstein distance between point sets (Earth Mover Distance [36]) and the Mixture Component Optimal Transport (MCOT) distance [21], and proved that Hδ is a metric whenever δ is a metric (Theorem 3). We then dealt with statistical mixtures, and showed that Hδ(m1:m2)≥δ(m1:m2) (Theorem 5) whenever δ is joint convex. This holds in particular for statistical f-divergences If(p:q)=∫p(x)f(q(x)/p(x))dx:

There are many venues to explore for further research. For example, we may consider infinite Gaussian mixtures [34], the chain rule factorization for d

-variate densities: This gives rise to a hierarchy of CROT distances. Another direction is to explore the use of the CROT distance in deep learning.

The smooth (dual) Sinkhorn divergence has also been shown experimentally (MNIST classification) to improve over the EMD in applications [5]. It would be also interesting to consider the Sinkhorn CROT vs CROT in applications [21] that deal with mixtures of features.

Frank Nielsen thanks Steve Huntsman for pointing out reference [21] to his attention.