On the Broadcast Routing Problem

Given an undirected graph G = (V, E), and a vertex r∈ V, an r-acyclic orientation of G is an orientation OE of the edges of G such that the digraph OG = (V, OE) is acyclic and r is the unique vertex with indegree equal to 0. For w∈^E_+, k(G, w) is the w-maximum packing of r-arborescences for all r∈ V and all r-acyclic orientations OE of G. In this case, the Broadcast Routing (in Computers Networks) Problem (BRP) is to compute k(G, w), by finding an optimal r and an optimal r-acyclic orientation. BRP is a mathematical formulation of multipath broadcast routing in computer networks. In this paper, we provide a polynomial time algorithm to solve BRP in outerplanar graphs. Outerplanar graphs are encountered in many applications such computational geometry, robotics, etc. 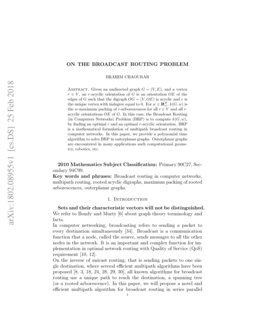 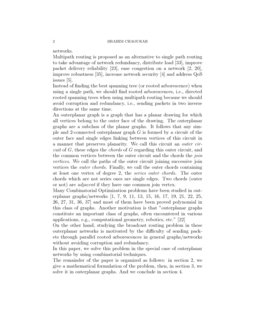 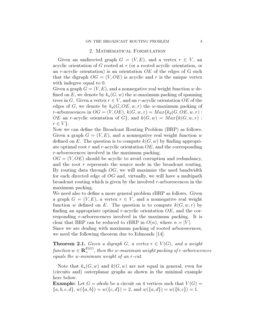 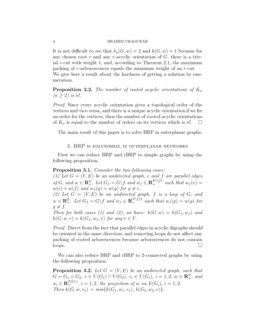 On the Broadcast Routing Problem in Computer Networks

On the complexity of Broadcast Domination and Multipacking in digraphs

Broadcasting in a computer network is a method of transferring a message...
Cristina G. Fernandes, et al. ∙

Broadcasts on Paths and Cycles

On the Broadcast Independence Number of Circulant Graphs

A novel evolutionary formulation of the maximum independent set problem

Sets and their characteristic vectors will not be distinguished.

We refer to Bondy and Murty [6] about graph theory terminology and facts. In computer networking, broadcasting refers to sending a packet to every destination simultaneously [34]. Broadcast is a communication function that a node, called the source, sends messages to all the other nodes in the network. It is an important and complex function for implementation in optimal network routing with Quality of Service (QoS) requirement [10, 12]. On the inverse of unicast routing, that is sending packets to one single destination, where several efficient multipath algorithms have been proposed [8, 3, 18, 24, 28, 29, 30], all known algorithms for broadcast routing use a unique path to reach the destination, a spanning tree (or a rooted arborescence). In this paper, we will propose a novel and efficient multipath algorithm for broadcast routing in outerplanar networks. Multipath routing is proposed as an alternative to single path routing to take advantage of network redundancy, distribute load [33], improve packet delivery reliability [23], ease congestion on a network [2, 20], improve robustness [35], increase network security [4] and address QoS issues [5]. Instead of finding the best spanning tree (or rooted arborescence) when using a single path, we should find rooted arborescences, i.e., directed rooted spanning trees when using multipath routing because we should avoid corruption and redundancy, i.e., sending packets in two inverse directions at the same time. An outerplanar graph is a graph that has a planar drawing for which all vertices belong to the outer face of the drawing. The outerplanar graphs are a subclass of the planar graphs. It follows that any simple and 2-connected outerplanar graph G is formed by a circuit of the outer face and single edges linking between vertices of this circuit in a manner that preserves planarity. We call this circuit an outer circuit of G, these edges the chords of G regarding this outer circuit, and the common vertices between the outer circuit and the chords the join vertices. We call the paths of the outer circuit joining successive join vertices the outer chords. Finally, we call the outer chords containing at least one vertex of degree 2, the series outer chords. The outer chords which are not series ones are single edges. Two chords (outer or not) are adjacent if they have one common join vertex.

Many Combinatorial Optimization problems have been studied in outerplanar graphs/networks

[1, 7, 9, 11, 13, 15, 16, 17, 19, 21, 22, 25, 26, 27, 31, 36, 37] and most of them have been proved polynomial in this class of graphs. Another motivation is that ”outerplanar graphs constitute an important class of graphs, often encountered in various applications, e.g., computational geometry, robotics, etc.” [22] On the other hand, studying the broadcast routing problem in these outerplanar networks is motivated by the difficulty of sending packets through parallel rooted arborescences in general graphs/networks without avoiding corruption and redundancy. In this paper, we solve this problem in the special case of outerplanar networks by using combinatorial techniques. The remainder of the paper is organized as follows: in section 2, we give a mathematical formulation of the problem, then, in section 3, we solve it in outerplanar graphs. And we conclude in section 4.

Note that ku(G,w) and k(G,w) are not equal in general, even for (circuits and) outerplanar graphs as shown in the minimal example here below. Example: Let G=abcda be a circuit on 4 vertices such that V(G)={a,b,c,d}, w({a,b})=w({c,d})=2, and w({a,d})=w({b,c})=1. It is not difficult to see that ku(G,w)=2 and k(G,w)=1 because for any chosen root r and any r-acyclic orientation of G, there is a trivial r-cut with weight 1, and, according to Theorem 2.1, the maximum packing of r-arborescences equals the minimum weight of an r-cut. We give here a result about the hardness of getting a solution by enumeration.

The number of rooted acyclic orientations of Kn (n≥2) is n!.

The main result of this paper is to solve BRP in outerplanar graphs.

3. BRP is polynomial in outerplanar networks

First we can reduce BRP and rBRP to simple graphs by using the following proposition.

Direct from the fact that parallel edges in acyclic digraphs should be oriented in the same direction, and removing loops do not affect any packing of rooted arborescences because arborescences do not contain loops. ∎

We can also reduce BRP and rBRP to 2-connected graphs by using the following proposition.

We need the following lemma for solving BRP and rBRP in any kind of graphs.

Given an acyclic digraph G, a vertex r∈V(G), and a weight function w∈RE(G)+, then the w-minimum r-cut is reached at a (single vertex) trivial r-cut.

Let U⊂V(G) such that r∉U and U is not empty. Then the subgraph G[U] induced by U is also acyclic and contains at least one (root) vertex v∈U such that the indegree of v in G[U] is zero. It follows that δ−(v)⊆δ−(U) and w(δ−(v))≤w(δ−(U)) because the weights are nonegative. We can conclude by taking the minimum of both sides of the later inequality. ∎

In this case, we denote by δr,w the w-minimum trivial r-cut for a given weight function w∈RE(G)+. We can deduce here below how to compute the maximum packing of arborescences in acyclic digraphs.

Given an acyclic digraph G rooted at the vertex r∈V(G), and a weight function w∈RE(G)+, then the w-maximum packing of r-arborescences can be computed in O(m2) where m=|E(G)|.

First, we solve BCNP and rBCNP in circuits.

BCNP and rBCNP can be solved in Cn, the circuit on n vertices, with n≥2, in linear time (O(n)).

For simple and 2-connected outerplanar graphs, we need the following results.

Let G be a simple and 2-connected outerplanar graph with k chords. If S2(G) is the maximum number of sinks with degree 2, for all r∈V and all r-acyclic orientations of G, then S2(G)≤k+1.

Let r∈V and OG=(OE,V) be root and acyclic orientation for which the number of sinks with degree 2 is maximum, i.e., equals S2(G). We will prove that S2(G)≤k+1 by induction on k. If k=0 then G is a circuit and trivially any acyclic orientation contains exactly one sink. Suppose now that k≥1. Note that all chords of G do not contain sinks of degree 2 in OG. Let C be an outer circuit of G and s∈V(C) a sink of degree 2 in OG. It follows that there is a directed rs-path in OG passing through at least one chord e (Otherwise if no chord is used in any rs-path, for all sinks s∈V of degree 2, we can remove this chord and, by induction on G∖e, we get the inequality). We choose e as the last chord in that rs-path. Let v be the last join vertex of e in that rs-path. Let now O′G be the r-acyclic orientation of G obtained from OG by reversing the orientation of all edges of the unique vs-path and maintaining the orientation of all remaining edges. Case 1: v is a sink in O′G. It follows that the pair (r, O′G∖e) is optimal for G∖e because, otherwise, we will get a better maximum for G. Thus S2(G)=S2(G∖e)≤k≤k+1. Case 2: v is not a sink in O′G. It follows that the number of sinks of degree 2 in O′G∖e is S2(G)−1. Thus S2(G)−1≤S2(G∖e)≤k, and then, S2(G)≤k+1. ∎

then all edges of Eu are forced.

The subgraph formed by all forced chords is a rooted arborescence.

Direct from the fact that there is no contribution induced by forced edges, so all vertices incident to them should have indegree 1 in the (full) acyclic orientation (at the end). ∎

Now, we solve BRP and rBRP in simple and 2-connected outerplanar graphs.

BCNP and rBCNP can be solved in simple and 2-connected outerplanar graphs in polynomial time.

We have given a new and the first multipath algorithm for broadcast routing (in computer networks). We have introduced a mathematical formulation for this problem and called it BRP. Then we have solved BRP in outerplanar graphs. Future investigations can be trying to prove the NP-hardness of BRP in general graphs and solve it in larger classes than outerplanar graphs.

Acknowledgements The author is grateful to the deanship of Scientific Research at Al Imam Mohammad Ibn Saud Islamic University (IMSIU) for supporting financially this research under the grant No 351223.