We consider the problem of sampling from a target distribution which is not necessarily logconcave. Non-asymptotic analysis results are established in a suitable Wasserstein-type distance of the Stochastic Gradient Langevin Dynamics (SGLD) algorithm, when the gradient is driven by even dependent data streams. Our estimates are sharper and uniform in the number of iterations, in contrast to those in previous studies. 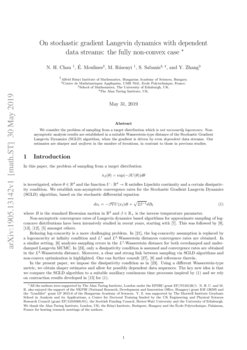 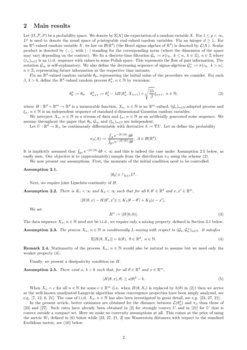 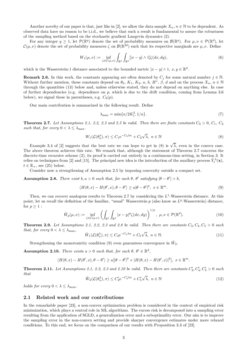 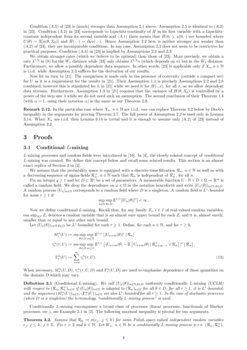 In this paper, the problem of sampling from a target distribution

is investigated, where θ∈Rd and the function U:Rd→R satisfies Lipschitz continuity and a certain dissipativity condition. We establish non-asymptotic convergence rates for the Stochastic Gradient Langevin Dynamics (SGLD) algorithm, based on the stochastic differential equation

where B is the standard Brownian motion in Rd and β∈R+ is the inverse temperature parameter.

Non-asymptotic convergence rates of Langevin dynamics based algorithms for approximate sampling of log-concave distributions have been intensively studied in recent years, starting with [7]. This was followed by [9], [13], [12], [5] amongst others.

Relaxing log-concavity is a more challenging problem. In [21], the log-concavity assumption is replaced by a logconcavity at infinity condition and L1 and L2-Wasserstein distances convergence rates are obtained. In a similar setting, [6] analyzes sampling errors in the L1-Wasserstein distance for both overdamped and underdamped Langevin MCMC. In [23], only a dissipativity condition is assumed and convergence rates are obtained in the L2-Wasserstein distance. Moreover, a clear and strong link between sampling via SGLD algorithms and non-convex optimization is highlighted. One can further consult [27], [8] and references therein.

In the present paper, we impose the dissipativity condition as in [23]. Using a different Wasserstein-type metric, we obtain shaper estimates and allow for possibly dependent data sequences. The key new idea is that we compare the SGLD algorithm to a suitable auxiliary continuous time processes inspired by (1) and we rely on contraction results developed in [15] for (1).

be a probability space. We denote by

the expectation of a random variable

X. For 1≤p<∞, Lp is used to denote the usual space of p-integrable real-valued random variables. Fix an integer d≥1. For an Rd-valued random variable X, its law on B(Rd) (the Borel sigma-algebra of Rd) is denoted by L(X). Scalar product is denoted by ⟨⋅,⋅⟩, with |⋅| standing for the corresponding norm (where the dimension of the space may vary depending on the context). We fix a discrete-time filtration Gn:=σ(εk, k≤n, k∈Z), n∈Z where (εn)n∈Z is an i.i.d. sequence with values in some Polish space. This represents the flow of past information. The notation G∞ is self-explanatory. We also define the decreasing sequence of sigma-algebras G+n:=σ(εk, k>n), n∈Z, representing future information at the respective time instants.

We interpret Xn, n∈N as a stream of data and ξn, n∈N as an artificially generated noise sequence. We assume throughout the paper that θ0, G∞ and (ξn)n∈N are independent.

Let U:Rd→R+ be continuously differentiable with derivative h:=∇U. Let us define the probability

It is implicitly assumed that ∫Rde−βU(θ)dθ<∞ and this is indeed the case under Assumption 2.5 below, as easily seen. Our objective is to (approximately) sample from the distribution πβ using the scheme (2).

We now present our assumptions. First, the moments of the initial condition need to be controlled.

Next, we require joint Lipschitz-continuity of H.

The data sequence Xn, n∈N need not be i.i.d., we require only a mixing property, defined in Section 3.1 below.

Stationarity of the process Xn, n∈N would also be natural to assume but we need only the weaker property (4).

Finally, we present a dissipativity condition on H.

In the present article, better estimates are obtained for the distance between L(θλn) and πβ than those of [23] and [27]. Such rates have already been obtained in [2] for strongly convex U and in [21] for U that is convex outside a compact set. Here we make no convexity assumptions at all. This comes at the price of using the metric W1 defined in (6) below while [23, 27, 21, 2] use Wasserstein distances with respect to the standard Euclidean metric, see (10) below.

Another novelty of our paper is that, just like in [2], we allow the data sample Xn, n∈N to be dependent. As observed data have no reason to be i.i.d., we believe that such a result is fundamental to assure the robustness of the sampling method based on the stochastic gradient Langevin dynamics (2).

which is the Wasserstein-1 distance associated to the bounded metric |x−y|∧1, x,y∈Rd.

In this work, the constants appearing are often denoted by Cj for some natural number j∈N. Without further mention, these constants depend on θ0, K1, K2, a, b, H∗, β, d and on the process Xn, n∈N through the quantities (13) below and, unless otherwise stated, they do not depend on anything else. In case of further dependencies (e.g. dependence on p, which is due to the drift condition, coming from Lemma 3.6 below), we signal these in parentheses, e.g. C6(p).

Our main contribution is summarized in the following result. Define

Example 3.4 of [2] suggests that the best rate we can hope to get in (8) is √λ, even in the convex case. The above theorem achieves this rate. We remark that, although the statement of Theorem 2.7 concerns the discrete-time recursive scheme (2), its proof is carried out entirely in a continuous-time setting, in Section 3. It relies on techniques from [2] and [15]. The principal new idea is the introduction of the auxiliary process ~Yλt(x), t∈R+, see (25) below.

Consider now a strengthening of Assumption 2.5 by imposing convexity outside a compact set.

Then, we can recover analogous results to Theorem 2.7 by considering the L1-Wasserstein distance. At this point, let us recall the definition of the familiar, “usual” Wasserstein-p (also know as Lp-Wasserstein) distance, for p≥1 :

Strengthening the monotonicity condition (9) even guarantees convergence in ~W2.

2.1 Related work and our contributions

In the remarkable paper [23], a non-convex optimization problem is considered in the context of empirical risk minimization, which plays a central role in ML algorithms. The excess risk is decomposed into a sampling error resulting from the application of SGLD, a generalization error and a suboptimality error. Our aim is to improve the sampling error in the non-convex setting and provide sharper convergence estimates under more relaxed conditions. To this end, we focus on the comparison of our results with Proposition 3.3 of [23].

We obtain stronger rates (which we believe to be optimal) than those of [23]. More precisely, we obtain a rate λ1/2 in (8) for the W1 distance while [23] only obtains λ5/4n (which depends on n) but in the ~W2 distance. Furthermore, we allow a possibly dependent data sequence. In other words, [23] is applicable only if Xn,n∈N is i.i.d. while Assumption 2.3 suffices for the derivation of our results.

Now let us turn to [21]. The comparison is made only in the presence of convexity (outside a compact set) for U as it is a requirement for the results in [21]. Their Assumption 1.1 is precisely Assumptions 2.2 and 2.8 combined, however this is stipulated for h in [21] while we need it for H(⋅,x), for all x, as we allow dependent data streams. Furthermore, Assumption 1.3 in [21]

requires that the variance of

H(θ,X0) is controlled by a power of the step size λ while we do not need such an assumption. The second conclusion of their Theorem 1.4 (with α=1, using their notation α) is the same as our Theorem 2.9.

L-mixing processes and random fields were introduced in [16]. In [4], the closely related concept of conditional L-mixing was created. We define this concept below and recall some related results. This section is an almost exact replica of Section 2 in [2].

We assume that the probability space is equipped with a discrete-time filtration Rn, n∈N as well as with a decreasing sequence of sigma-fields R+n, n∈N such that Rn is independent of R+n, for all n.

Fix an integer q≥1 and let D⊂Rq be a set of parameters. A measurable function U:N×D×Ω→Rm is called a random field. We drop the dependence on ω∈Ω in the notation henceforth and write (Un(θ))n∈N,θ∈D. A random process (Un)n∈N corresponds to a random field where D is a singleton. A random field is Lr-bounded for some r≥1 if

Now we define conditional L-mixing. Recall that, for any family Zi, i∈I of real-valued random variables, ess.supi∈IZi denotes a random variable that is an almost sure upper bound for each Zi and it is, almost surely, smaller than or equal to any other such bound.

When necessary, Mnr(U,D), γnr(τ,U,D) and Γnr(U,D) are used to emphasize dependence of these quantities on the domain D which may vary.

almost surely, where C(r) is a deterministic constant depending only on r but independent of k,m.

The proof is identical to that of Lemma 6.3 of [4], noting the Lipschitz continuity. ∎

Throughout this section we assume that the hypotheses of Theorem 2.7 are valid. Note that Assumption 2.2 implies

with the constant H∗ defined in (3). We will employ a family of Lyapunov-functions in the sequel. For this purpose, let us define, for each p≥2, vp(x):=(1+x2)p/2, for any real x≥0, and similarly

Notice that these functions are twice continuously differentiable and

For μ∈P(Rd) and for a non-negative measurable f:Rd→R, the notation

is used. The following functional is pivotal in our arguments as it is used to measure the distance between probability measures. We define, for any p≥1 and μ,ν∈PVp,

Though w1,p is not a metric, it satisfies trivially

Our estimations are carried out in a continuous-time setting, so we define and discuss a number of auxiliary continuous-time processes below. First, consider Lt, t∈R+ defined by the stochastic differential equation (SDE)

where B is standard Brownian motion on (Ω,F,P), independent of G∞∨σ(θ0). Its natural filtration is denoted by Ft, t∈R+ henceforth. The meaning of F∞ is clear. Equation (23) has a unique solution on R+ adapted to (Ft)t∈R+ since h is Lipschitz-continuous by (17). We proceed by defining, for each λ>0,

Notice that ~Bλt:=Bλt/√λ, t∈R+ is also a Brownian motion and

with initial condition ~Yλ0(x)=θ0. Due to Assumption 2.2, there is a unique solution to (25) which is adapted to (Fλt)t∈R+. Moreover, for any given s≥0 and t≥s, consider the following auxiliary process, which plays an important role in the derivation of our results,

Let us now define the continuously interpolated Euler-Maruyama approximation of

with initial condition Yλ0(x)=θ0. Notice at this point that (27), can be solved by a simple recursion. In addition, if one considers Yλt(X), t∈R+, where X is a random element in (Rm)N defined by Xi:=Xi, i∈N, then for each integer n∈N,

The next lemma shows that the SDEs (25) and (23) satisfy standard drift conditions involving the functions Vp. Note that, on the left-hand side of (29) below, the infinitesimal generator of the diffusion process L appears which is applied to the function Vp.

By direct calculation, the left-hand side of (29) equals

Take into consideration of the two cases, we have for all θ∈Rd,

The statement (30) follows in an identical way, noting that the constants which appear do not depend on x. ∎

Now, we proceed with the required moment estimates which play a crucial role in the derivation of the main results as given in Theorems 2.7, 2.9 and 2.11.

where the expectation of the stochastic integral disappears since sup0≤s≤tE(∇Vp)2(~ζλ(t,s;x,~θ))<∞ by ~θ∈L2p−2. Differentiating both sides and using Lemma 3.6, one obtains