Recommender systems have relied on many intelligent technologies (e.g. machine learning) which have procured credibility issues due to several concerns ranging from lack of privacy and accountability, biases and their inherent design complexity. Given this lack of understanding of how recommender systems work, users strategically interact with such systems via accepting any information with a grain of salt. Furthermore, the recommender system evaluates choices based on a different utilitarian framework, which can be fundamentally different from the user's rationality. Therefore, in this paper, we model such an interaction between the recommender system and a human user as a Stackelberg signaling game, where both the agents are modeled as expected-utility maximizers with non-identical prior beliefs about the choice rewards. We compute the equilibrium strategies at both the system and the user, and investigate conditions under which (i) the recommender system reveals manipulated information, and (ii) trust regarding the recommender system deteriorates when the true rewards are realized at the user. 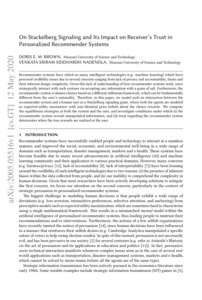 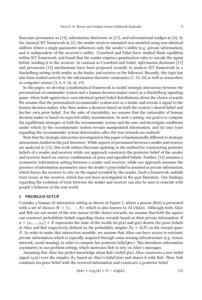 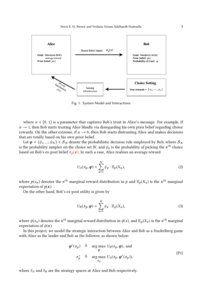 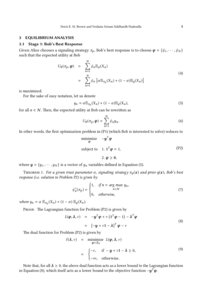 How does the User's Knowledge of the Recommender Influence their Behavior?

The global infrastructure of the Web, designed as an open and transparen...
Jesse Josua Benjamin, et al. ∙

Despite the overwhelming quantity of health information that is availabl...
Prakruthi Karuna, et al. ∙

A Distributed and Accountable Approach to Offline Recommender Systems Evaluation

Different software tools have been developed with the purpose of perform...
Diego Monti, et al. ∙

Recommender systems have successfully enabled people and technology to interact in a seamless manner, and improved the social, economic, and environmental well-being in a wide range of domains such as transportation, disaster management, markets and e-health. These systems have become feasible due to many recent advancements in artificial intelligence (AI) and machine learning community and their application to various practical domains. However, many concerns (e.g. fairness/privacy

(ProPublica2016, ), lack of accountability (Doshi2017, ), lack of interpretability (Doshi2017b, )) have been looming around the credibility of such intelligent technologies due to two reasons: (i) the presence of inherent biases within the data collected from people, and (ii) our inability to comprehend the complexity in human decisions. Given that most researchers have been actively developing solutions to mitigate the first concern, we focus our attention on the second concern, particularly in the context of strategic persuasion in personalized recommender systems.

The biggest challenge in modeling human decisions is that people exhibit a wide range of deviations (e.g. loss aversion, intransitive preferences, selective attention, and anchoring) from prescriptive models such as expected utility maximization, which are sometimes hard to characterize using a single mathematical framework. This results in a mismatched mental model within the artificial intelligence of personalized recommender systems, thus leading people to mistrust their recommendations and/or interventions. Furthermore, the actions of a few selfish organizations have recently tainted the notion of persuasion (Lawler2018, ), since human decisions have been influenced in a manner that reinforces their selfish desires (e.g. Cambridge Analytica manipulated a specific subset of voters to help swing election results). In spite of this turmoil, persuasion is not necessarily evil, and has been pervasive in our society (Antioch2013, ) for several centuries (e.g. refer to Aristotle’s Rhetoric on the art of persuasion and its applications in education and politics (Higgins2012, )). In fact, persuasive socio-technical interaction manifests whenever complex issues arise as in the case of several real-world applications such as transportation, disaster management systems, markets and e-health, which cannot be solved by mono-teams (where all the agents are of the same type).

Strategic information transmission has been actively pursued in the economics literature since early 1980s. Some notable examples include strategic information transmission (SIT) games in (Crawford1982, ), Bayesian persuasion in (Kamenica2011, ), information disclosure in (Rayo2010, ), and informational nudges in (Coffman2015, ). In the classical SIT framework in (Crawford1982, ), the sender-receiver mismatch was modeled using non-identical utilities where a single parameter influences only the sender’s utility (e.g. private information), and is independent of the receiver’s utility. Crawford and Sobel have studied Nash equilibria within SIT framework, and found that the sender employs quantization rules to encode the signal before sending it to the receiver. In contrast to Crawford and Sobel, information disclosure (Rayo2010, ) and persuasion (Kamenica2011, ) mechanisms have been proposed recently to analyze SIT framework in a Stackelberg setting (with sender as the leader, and receiver as the follower). Recently, this topic has also been studied actively by the information-theoretic community (Akyol2017b, ; Saritas2016, ; Nadendla2018, ) as well as researchers in computer science (Fogg2002, ; Babichenko2016, ; Xu2016, ; Dughmi2017, ; Das2017, ; Oudah2018, ).

Consider a human-AI interaction setting as shown in Figure 1, where a person (Bob) is presented with a set of choices N={1,⋯,N} which is also known to AI (Alice). Although both Alice and Bob are not aware of the true nature of the choice rewards, we assume that both the agents can construct probabilistic beliefs regarding choice rewards based on their private information. If x={x1,...,xN}∈X represents the state of the world, let p(x) and q(x)

SX=Δ(X) on the reward space X. In order to make this interaction sensible, we assume that Alice can have access to extrinsic private information which is typically acquired through some sensing infrastructure (e.g. sensor network, social sensing), in order to compute her posterior belief p(x). This introduces information asymmetry in our problem setting, which motivates Bob to rely on Alice’s messages.

Assuming that Alice has perfect knowledge about Bob’s belief q(x), Alice constructs a new belief signal πp(x) over the simplex SX based on Alice’s belief p(x) and shares it with Bob. Then, Bob combines his prior belief with the received information and constructs a posterior belief

On the other hand, Bob’s ex-post utility is given by

In this project, we model the strategic interaction between Alice and Bob as a Stackelberg game with Alice as the leader and Bob as the follower, as shown below:

where SA and SB are the strategy spaces at Alice and Bob respectively.

Given Alice chooses a signaling strategy πp, Bob’s best response is to choose ψ={ψ1,⋯,ψN} such that the expected utility at Bob

For the sake of easy notation, let us denote

for all n∈N. Then, the expected utility at Bob can be rewritten as

In other words, the first optimization problem in (P1) (which Bob is interested to solve) reduces to

is a vector of

For a given trust parameter α, signaling strategy πp(x) and prior q(x), Bob’s best response (i.e. solution to Problem P2) is given by

The Lagrangian function for Problem (P2) is given by

The dual function for Problem (P2) is given by

Therefore, the dual problem to Problem P2 is given as follows:

Without any loss of generality, Constraint 1 in Problem (P3) can be equivalently replaced with the statement

Since the objective of Problem (P3) is equivalent to minimizing ν, the optimal choice of ν reduces to

Since the duality gap in a linear program is zero, the optimal value of the primal problem in (

P2) is also equal to ν∗, which can be obtained with Bob’s best response shown in Equation (7). ∎

Alice’s optimal signal strategy is to choose the maximum entry ψn in the vector v={v1,⋯,vN} such that

is maximized. For the sake of easy notation, let us denote

for all n∈N. Then, the expected utility at Alice can be rewritten as

If we denote z={z1,⋯,zN} as a vector of zn variables defined in Equation (13), the second optimization problem in (P1), which Alice wishes to solve, reduces to

If we denote average rewards as μ=Eπp(X), then Problem P5 reduces to the following:

Since Bob chooses ψ∗(πp) according to Equation (7), it is natural to identify n∗=arg maxz and maximize yn∗ via choosing μ such that

holds true for all n∈N.

Revealing the average rewards Eπp(X) as opposed to signaling the distribution πp does not have any effect on the utilities at both Alice and Bob.

Before we analyze the effects of trust parameter α on Alice’s signaling, we first define strategic manipulation formally in the following definition.

In other words, if we replace Ep(Xn∗) in the Alice’s optimal signaling condition in Equation (15), we can find settings in which Alice employs strategic manipulation. We state this condition formally in the following corollary.

(to Theorem 2) Alice adopts strategic manipulation if there exists at least one n∈N such that the following condition holds true.

Note that, when α=1, Condition (17) does not hold true, since n∗=arg maxEp(X). In other words, when Bob trusts Alice, Alice naturally has the incentive to reveal truthful information to Bob. We state this result formally in the following corollary.

(to Theorem 2) When α=1, Alice has no incentive to share manipulated information to Bob.

Although Alice may reveal truthful information to Bob, he cannot observe if Alice’s signaling strategy is congruent with her prior belief p. This lack of information regarding Alice’s prior belief p can lead to distrust at Bob regarding Alice, especially when Bob does not obtain the desired outcomes. Therefore, in this paper, we model Bob’s trust dynamics in the following manner:

where ϵ>0 is the default step size, and RB=UB(π∗p,f∗)−U∗B is Bob’s regret for not obtaining the utility U∗B, which he would have obtained if he did not interact with Alice. In other words, U∗B can be computed by substituting α=0 in Equation (7).

denote the choice picked by Bob after interacting with Alice, as pointed in Theorem 1. In such a case, Bob’s regret can be computed as

where is the choice that Bob would have picked if he did not interact with Alice. Obviously, if Bob does not participate in this interaction, then α=0 and his regret will continue to remain zero. Therefore, we henceforth ignore this trivial case, and always assume that Bob interacts with Alice with α>0.

As our final result, we show that the dynamical model defined in Equations (18) and (20) can potentially deteriorate Bob’s trust even though Alice is revealing information truthfully.

Bob’s trust deteriorates even though Alice reveals truthful signals, whenever

If Alice is truthful, then πp=p. Therefore, we replace πp with p in the definition of RB, and obtain Bob’s regret under the condition when Alice reveals its prior information truthfully regarding the choice rewards. Note that Bob’s trust deteriorates whenever RB<0. Rearranging the terms, we obtain the claimed result. ∎

In this project, we modeled the strategic interaction between a recommender system, Alice, and a human agent, Bob, as a Stackelberg game with Alice as the leader and Bob as the follower. We computed the equilibrium strategy at Bob, and presented sufficient conditions for Alice’s equilibrium strategy. By analyzing dynamics of Bob’s trust, we found that Alice will employ strategic manipulation if her signalling strategy does not match her posterior belief, but Alice has no incentive to employ strategic manipulation if Bob does not distrust her. We also showed that Bob’s trust may deteriorate even when Alice is revealing information truthfully, if he does not obtain a desired outcome after interacting with Alice. In our future work, we will extend these results by considering the evolution of Bob’s trust towards Alice when Bob’s rationality are characterized by human decision models as opposed to expected utility maximization.