A stabilizing/penalty term is often used in finite element methods with discontinuous approximations to enforce connection of discontinuous functions across element boundaries. Removing stabilizers from discontinuous finite element methods will simplify the formulations and reduce programming complexity significantly. The goal of this paper is to introduce a stabilizer free weak Galerkin finite element method for second order elliptic equations on polytopal meshes in 2D or 3D. This new WG method keeps a simple symmetric positive definite form and can work on polygonal/polyheral meshes. Optimal order error estimates are established for the corresponding WG approximations in both a discrete H^1 norm and the L^2 norm. Numerical results are presented verifying the theorem. 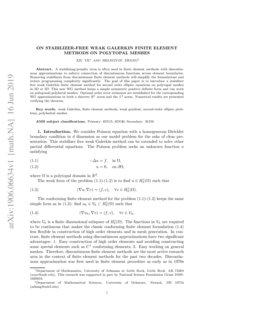 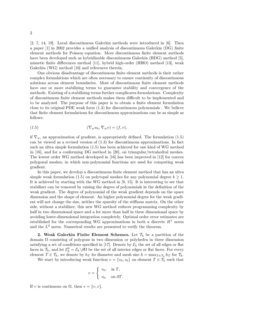 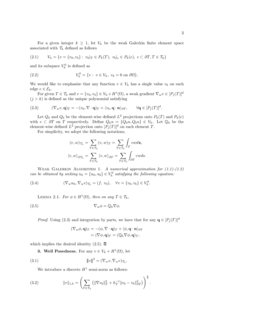 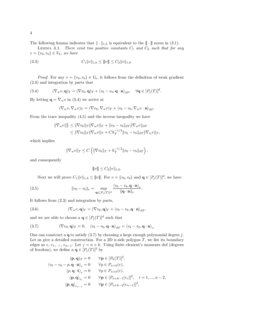 Hybrid high-order and weak Galerkin methods for the biharmonic problem

Projection in negative norms and the regularization of rough linear functionals

In this paper, we take a fresh look at using spectral analysis for asses...
Thi-Hoa Nguyen, et al. ∙

dimension as our model problem for the sake of clear presentation. This stabilizer free weak Galerkin method can be extended to solve other partial differential equations. The Poisson problem seeks an unknown function

where Ω is a polytopal domain in Rd.

The conforming finite element method for the problem (1)-(2) keeps the same simple form as in (3): find uh∈Vh⊂H10(Ω) such that

if ∇w, an approximation of gradient, is appropriately defined. The formulation (5) can be viewed as a revised version of (3) for discontinuous approximations. In fact such an ultra simple formulation (5) has been achieved for one kind of WG method in [17], and for a conforming DG method in [21], on triangular/tetrahedral meshes. The lowest order WG method developed in [17] has been improved in [12] for convex polygonal meshes, in which non-polynomial functions are used for computing weak gradient.

In this paper, we develop a discontinuous finite element method that has an ultra simple weak formulation (5) on polytopal meshes for any polynomial degree k≥1. It is achieved by starting with the WG method in [9, 16]. It is interesting to see that stabilizer can be removed by raising the degree of polynomials in the definition of the weak gradient. The degree of polynomial of the weak gradient depends on the space dimension and the shape of element. An higher polynomial degree for the weak gradient will not change the size, neither the sparsity of the stiffness matrix. On the other side, without a stabilizer, this new WG method reduces programming complexity by half in two dimensional space and a lot more than half in three dimensional space by avoiding lower-dimensional integration completely. Optimal order error estimates are established for the corresponding WG approximations in both a discrete H1 norm and the L2 norm. Numerical results are presented to verify the theorem.

We start by introducing weak function v={v0,vb} on element T∈Th such that

For a given integer k≥1, let Vh be the weak Galerkin finite element space associated with Th defined as follows

and its subspace V0h is defined as

We would like to emphasize that any function v∈Vh has a single value vb on each edge e∈Eh.

A numerical approximation for (1)-(2) can be obtained by seeking uh={u0,ub}∈V0h satisfying the following equation:

Using (8) and integration by parts, we have that for any q∈[Pj(T)]d

which implies the desired identity (10).

We introduce a discrete H1 semi-norm as follows:

There exist two positive constants C1 and C2 such that for any v={v0,vb}∈Vh, we have

For any v={v0,vb}∈Vh, it follows from the definition of weak gradient (8) and integration by parts that

One can construct such q satisfying (16) by choosing a large enough polynomial degree j. Let us give a detailed construction. For a 2D n-side polygon T, we list its boundary edges as e, e1, …, en−1. Let j=k+n−1

is a tangent vector to edge

The proof of uniqueness is identical to the proof above for the 2D case.

Substituting the above solution q into (15), we get

It follows from Cauchy-Schwarz inequality that

On the reference element ^T, as all norms are equivalent on a finite dimensional vector space

with an absolute constant C independent of ^T but depending on the worst shape of ^T, cf. Stenberg [15] and Wang-Ye [18]. After an affine mapping, it follows

where ΠPk(e) is the L2 orthogonal projection to Pk(e) on the edge or polygon e. Thus, we rewrite (26) as

Repeating (27) on all boundary edges/polygons, we have

It follows from the trace inequality, the inverse inequality and (28),

Combining the above estimate and (28), by the definition (12), we prove the lower bound of (13) and complete the proof of the lemma.

The weak Galerkin finite element scheme (9) has a unique solution.

Note that εh∈V0h. Then by letting v=εh in the above equation we arrive at

Let eh=u−uh and ϵh=Qhu−uh. Next we derive an error equation that eh satisfies.

The error equation follows from subtracting (9) from (32),

This completes the proof of the lemma.

For any function φ∈H1(T), the following trace inequality holds true (see [18] for details):

Using the Cauchy-Schwarz inequality, the trace inequality (33) and (13), we have

which proves the lemma.

Let uh∈Vh be the weak Galerkin finite element solution of (9). Assume the exact solution u∈Hk+1(Ω). Then, there exists a constant C such that

It is straightforward to obtain

We will bound each terms in (4). It follows from (8), integration by parts and the trace inequality,

Letting q=∇w(u−Qhu) in the above equation and taking summation over T, we have

Assume that the following H2-regularity holds

Let uh∈Vh be the weak Galerkin finite element solution of (9). Assume that the exact solution u∈Hk+1(Ω) and (41) holds true. Then, there exists a constant C such that

Next we will estimate all the terms on the right hand side of (45). Using the Cauchy-Schwarz inequality, the trace inequality (33) and the definitions of Qh and Πh we obtain

Combining all the estimates above with (45) yields

The estimate (42) follows from the above inequality and the regularity assumption (41). We have completed the proof.

We solve the following Poisson equation on the unit square:

with the boundary condition u=0 on ∂Ω.

In the first computation, the level one grid consists of two unit right triangles cutting from the unit square by a forward slash. The high level grids are the half-size refinements of the previous grid. The first levels of grids are plotted in Figure 1. We apply Pk finite element methods Vh and list the error and the order of convergence in the following table, Table 1. The numerical results confirm the convergence theory.

In the next computation, we use a family of polygonal grids (with 12-side polygons) shown in Figure 2. We can see, from Table 2 that the polynomial degree j for the weak gradient must be a little bigger, as indicated in the proof of (16). The convergence history confirms the theory.