On some interrelations of generalized q-entropies and a generalized Fisher information, including a Cramér-Rao inequality 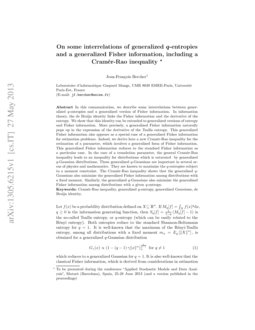 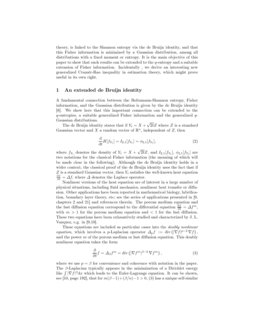 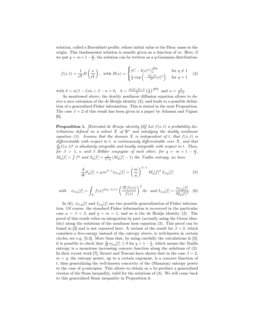 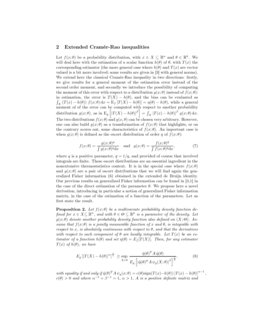 We propose a modified χ^β-divergence, give some of its properties, and s...
Jean-François Bercher, et al. ∙

Fisher Information of a Family of Generalized Normal Distributions

In this brief note we compute the Fisher information of a family of gene...
Precious Ugo Abara, et al. ∙

We establish lower bounds on the volume and the surface area of a geomet...
Jing Hao, et al. ∙

is a standard Gaussian vector and

X a random vector of Rn, independent of Z, then

where fYt denotes the density of Yt=X+√2tZ, and I2,1[fYt], ϕ2,1[fYt] are two notations for the classical Fisher information (the meaning of which will be made clear in the following). Although the de Bruijn identity holds in a wider context, the classical proof of the de Bruijn identity uses the fact that if Z is a standard Gaussian vector, then Yt satisfies the well-known heat equation ∂f∂t=Δf, where Δ denotes the Laplace operator.

Nonlinear versions of the heat equation are of interest in a large number of physical situations, including fluid mechanics, nonlinear heat transfer or diffusion. Other applications have been reported in mathematical biology, lubrification, boundary layer theory, etc; see the series of applications presented in [9, chapters 2 and 21] and references therein. The porous medium equation and the fast diffusion equation correspond to the differential equation ∂f∂t=Δfm, with m>1 for the porous medium equation and <1 for the fast diffusion. These two equations have been exhaustively studied and characterized by J. L. Vazquez, e.g. in [9, 10].

where we use p=β for convenience and coherence with notation in the paper. The β-Laplacian typically appears in the minimization of a Dirichlet energy like ∫|∇f|βdx which leads to the Euler-Lagrange equation. It can be shown, see [10, page 192], that for m(β−1)+(β/n)−1>0, (3) has a unique self-similar solution, called a Barenblatt profile, whose initial value is the Dirac mass at the origin. This fundamental solution is usually given as a function of m. Here, if we put q=m+1−αβ, the solution can be written as a q-Gaussian distribution:

As mentioned above, the doubly nonlinear diffusion equation allows to derive a nice extension of the de Bruijn identity (2), and leads to a possible definition of a generalized Fisher information. This is stated in the next Proposition. The case β=2 of this result has been given in a paper by Johnson and Vignat [6].

[Extended de Bruijn identity [2]] Let f(x,t) a probability distributions defined on a subset X of Rn and satisfying the doubly nonlinear equation (3). Assume that the domain X is independent of t, that f(x,t) is differentiable with respect to t, is continuously differentiable over X, and that ∂∂tf(x,t)q is absolutely integrable and locally integrable with respect to t. Then, for β>1, α and β Hölder conjugate of each other, for q=m+1−αβ, Mq[f]=∫fq and Sq[f]=11−q(Mq[f]−1) the Tsallis entropy, we have

In (6), ϕβ,q[f] and Iβ,q[f] are two possible generalization of Fisher information. Of course, the standard Fisher information is recovered in the particular case α=β=2, and q=m=1, and so is the de Bruijn identity (2). The proof of this result relies on integration by part (actually using the Green identity) along the solutions of the nonlinear heat equation (3). This proof can be found in [2] and is not repeated here. A variant of the result for β=2, which considers a free-energy instead of the entropy above, is well-known in certain circles, see e.g. [5, 4]. More than that, by using carefully the calculations in [5], it is possible to check that ddtϕ2,q[f]≤0 for q>1−1n, which means the Tsallis entropy is a monotone increasing concave function along the solutions of (3). In their recent work [7], Savaré and Toscani have shown that in the case β=2, m=q, the entropy power, up to a certain exponent, is a concave function of t, thus generalizing the well-known concavity of the (Shannon) entropy power to the case of q-entropies. This allows to obtain as a by-product a generalized version of the Stam inequality, valid for the solutions of (3). We will come back to this generalized Stam inequality in Proposition 6.

Let f(x;θ) be a probability distribution, with x∈X⊆Rn and θ∈Rk. We will deal here with the estimation of a scalar function h(θ) of θ, with T(x) the corresponding estimator (the more general case where h(θ) and T(x) are vector valued is a bit more involved; some results are given in [3] with general norms). We extend here the classical Cramér-Rao inequality in two directions: firstly, we give results for a general moment of the estimation error instead of the second order moment, and secondly we introduce the possibility of computing the moment of this error with respect to a distribution g(x;θ) instead of f(x;θ): in estimation, the error is T(X)−h(θ), and the bias can be evaluated as ∫X(T(x)−h(θ))f(x;θ)dx=Ef[T(X)−h(θ)]=η(θ)−h(θ), while a general moment of of the error can be computed with respect to another probability distribution g(x;θ), as in Eg[|T(X)−h(θ)|β]=∫X|T(x)−h(θ)|βg(x;θ)dx. The two distributions f(x;θ) and g(x,θ) can be chosen very arbitrary. However, one can also build g(x;θ) as a transformation of f(x;θ) that highlights, or on the contrary scores out, some characteristics of f(x;θ). An important case is when g(x;θ) is defined as the escort distribution of order q of f(x;θ):

be a multivariate probability density function defined for

x∈X⊆Rn, and with θ∈Θ⊆Rk is a parameter of the density. Let g(x;θ) denote another probability density function also defined on (X;Θ). Assume that f(x;θ) is a jointly measurable function of x and θ, is integrable with respect to x, is absolutely continuous with respect to θ, and that the derivatives with respect to each component of θ are locally integrable. Let T(x) be an estimator of a function h(θ) and set η(θ)=Ef[T(X)]. Then, for any estimator T(x) of h(θ), we have

For any positive definite matrix A, multiplying on the left by ˙η(θ)TA gives

and by the Hölder inequality, we obtain

The inverse of the matrix A which maximizes the right hand side is the Fisher information matrix of order β. Unfortunately, we do not have a closed-form expression for this matrix in the general case. Two particular cases are of interest.

[Scalar extended Cramér-Rao inequality] In the scalar case (or the case of a single component of θ), the following inequality holds

In the simple scalar case, we see that A>0 can be simplified in (8) and thus that (10) follows. Note that for α=2, the equality case implies that Eg[ψg]=0=Eg[T(X)−h(θ)], which means that Eg[T(X)]=η(θ)=h(θ), i.e. the estimator is unbiased (with respect to both f and g). Actually, this inequality recovers at once the generalized Cramér-Rao inequality we presented in the univariate case [1] . The denominator plays the role of the Fisher information in the classical case, which corresponds to the case g(x;θ)=f(x;θ), β=2. As mentioned above, an extension of this result to the multidimensional case and arbitrary norms has been presented in [3] but it does not seem possible to obtain it here as particular case of (8).

A second interesting case is the multivariate case α=β=2. Indeed, in that case, we get an explicit form for the generalized Fisher information matrix and an inequality which looks like the classical one.

The denominator of (8) is a quadratic form and we have

Since it can be readily checked that the upper bound is attained with A=Jg(θ)−1, we finally end with (11). Of course, for g=f, the inequality (11) reduces to the classical multivariate Cramér-Rao inequality. ∎

An important consequence of these results is obtained in the case of a translation parameter, where the generalized Cramér-Rao inequality induces a new class of inequalities. Let θ∈R be a scalar location parameter, x∈X⊆Rn, and define by f(x;θ) the family of density f(x;θ)=f(x−θ1), where 1 is a a vector of ones. In this case, we have ∇θf(x;θ)=−1T∇xf(x−θ1), provided that f is differentiable at x−θ1, and the Fisher information becomes a characteristic of the information in the distribution. If X is a bounded subset, we will assume that f(x) vanishes and is differentiable on the boundary ∂X. Without loss of generality, we will assume that the mean of f(x) is zero. Set h(θ)=θ and take T(X)=1TX/n, with of course η(θ)=E[T(X)]=θ and ˙η(θ)=1. Finally, let us choose the particular value θ=0. In these conditions, the generalized Cramér-Rao inequality (10) becomes

with equality if and only if 1T∇xf(x)g(x)=c(θ)sign(1TX)∣∣1TX∣∣α−1. In[3] , we have a slightly more general result in the multivariate case:

where ∥.∥ is a norm, and the corresponding dual norm is denoted by ∥.∥∗. Finally, let f(x) and g(x) be a pair of escort distributions as in (7). In such a case, the following recovers the generalized Fisher information (6) and yields a new characterization of q-Gaussian distributions.

The case of equality is obtained by solving the general equality conditions in the special case where f(x) and g(x) form a pair of escort distributions. ∎

To sum up and emphasize the main results, let us point out that we have exhibited a generalized Fisher information, both as a by-product of a generalization of de Bruijn identity and as a fundamental measure of information in estimation theory. We have shown that this allows to draw a nice interplay between q-entropies, generalized q-Gaussians and the generalized Fisher information. These interrelations yield the generalized q-Gaussians as minimizers of the (β,q)-Fisher’s information under adequate constraints, or as minimizers of functionals involving q-entropies, (β,q)-Fisher’s information and/or moments. This is shown through inequalities and identities involving these quantities and generalizing classical information relations (Cramér-Rao’s inequality, Stam’s inequality, De Bruijn’s identity).