On sets of terms with a given intersection type 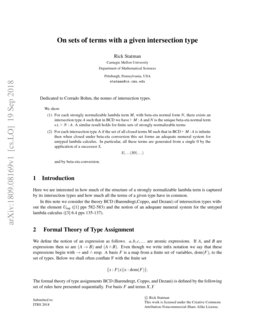 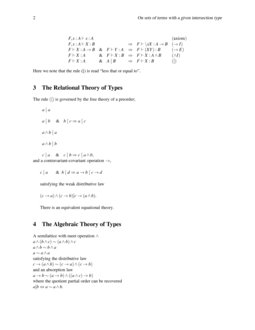 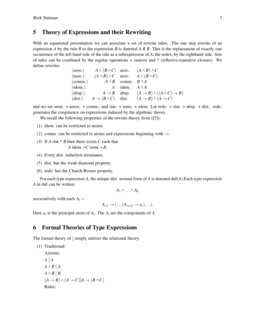 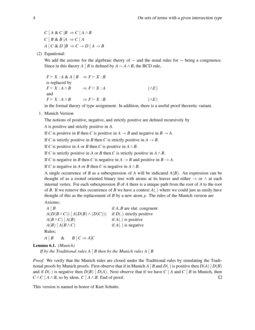 Here we are interested in how much of the structure of a strongly normalizable lambda term is captured by its intersection types and how much all the terms of a given type have in common.

In this note we consider the theory BCD (Barendregt,Coppo, and Dezani) of intersection types without the element Utop ([1] pps 582-583) and the notion of an adequate numeral system for the untyped lambda calculus ([3] 6.4 pps 135-137).

We define the notion of an expression as follows. a,b,c,… are atomic expressions. If A, and B are expressions then so are (A→B) and (A∧B). Even though we write infix notation we say that these expressions begin with → and ∧ resp. A basis F is a map from a finite set of variables, dom(F), to the set of types. Below we shall often conflate F with the finite set

The formal theory of type assignments BCD (Barendregt, Coppo, and Dezani) is defined by the following set of rules here presented sequentially. For basis F and terms X,Y

3 The Relational Theory of Types

The rule ([) is governed by the free theory of a preorder;

There is an equivalent equational theory.

4 The Algebraic Theory of Types

5 Theory of Expressions and their Rewriting

With an equational presentation we can associate a set of rewrite rules. The one step rewrite of an expression A by the rule R to the expression B is denoted A R B. This is the replacement of exactly one occurrence of the left hand side of the rule as a subexpression of A, the redex, by the righthand side. Sets of rules can be combined by the regular operations + (union) and * (reflexive-transitive closure). We define rewrites

We recall the following properties of the rewrite theory from ([5]).

associatively with each Ai=

Here ai is the principal atom of Ai. The Ai are the components of A.

The formal theory of [ simply mirrors the relational theory.

We verify that the Munich rules are closed under the Traditional rules by simulating the Traditional proofs by Munich proofs. First observe that if in Munich A [ B and D(.) is positive then D(A) [ D(B) and if D(.) is negative then D(B) [ D(A). Next observe that if we have C [ A and C [ B in Munich, then C∧C [ A∧B, so by idem. C [ A∧B. End of proof. ∎

This version is named in honor of Kurt Schutte.

7 Evaluating Types in the Tropical Semiring

The dual of e, denoted ∼e, is obtained from e by interchanging max and min.

Facts; (tropical) For all natural number values of the variables x

¿From these facts we conclude the

By the Munich axioms and rules. End of proof. ∎

Here we need to strengthen several of the derived rules for BCD stated in ([3]) chapter 14 to proof theoretic statements. For this it is convenient to write proofs in tree form. Indeed, we shall implicitly adopt the natural deduction form of the rules of BCD using the left hand side of sequences to indicate active assumptions. We denote proofs P,P′,Q,Q′ etc.

(dnf) Suppose that for each x:dom(F) F(x) and A are in dnf, and F⊢X:A is provable. Then there is a proof where every type expression is in dnf.

Case 2: P ends in the BCD rule ∧I. Since dnf(B∧V)=dnf(B)∧ dnf(C) this case is obvious. Remark; the case ∧E is similar and could be included here.

Let dnf(C)=C1∧…∧Cn where each Ci is dnf and does not begin with ∧. By induction hypothesis there exist proofs Q′, Q′′ of

Case 4; P ends in the BCD rule →I. Again we may suppose that A=B→C,X has the form uU and P has the form

Now if dnf(C)=C1∧…∧Cn, where each Ci is dnf and does not begin with ∧, then

By induction hypothesis there exists a proof of

which after applications of ∧E yields a proof Qi of

These can be combined by ∧I for the desired result. End of proof. ∎

(predicate reduction)        Suppose P is a proof of F⊢X:A where every type expression is in dnf. Then there exists a similar proof where every application of the BCD rule [ is to a variable as the subject.

Next we consider an application of the BCD rule ([) in P immediately following the application of a different rule, and we show how the ([) can be promoted (if you like, permuted).

which can be combined by ∧I.

Replacing axioms G,u:C⊢u:C in P′ by

which can be combined by ∧I.

and these can all be combined with ∧I. End of proof. ∎

A sequence of inferences

is said to be “intemperate” and can be replaced by

Suppose that for each x:dom(F) F(x) and A are in dnf, and F⊢X:A is provable. Then there is a proof of F⊢X:A such that

Definition 8.5 We define the notion of a oscillation in the Bohm tree of a beta normal term X as follows. An oscillation is a sequence of pairs of nodes which descend in the tree such that the node

is paired with one of the arguments of this occurrence of x which has a non-empty lambda prefix, and the next pair (if it exists) has the head variable of its first coordinate bound by this lambda prefix.

Definition 8.6 We say that the closed term X=

in beta normal form is of class n if

(iii) every oscillation in the Bohm tree of X has at most length n.

w.l.o.g we may assume that A and all F(x) are in dnf. The proof is by induction on an am proof P of F⊢X:A

Basis; P is an axiom. Obvious.

Case 1; P ends in ∧I. Then A=B∧C and e(A)=min{e(B),e(C)}. By induction hypothesis applied to the premise of minimum e.

Case 3; P ends in →E Now consider the leftmost path of P proceeding up P′; i.e. we take left premises of →E’s as often as possible, and then possibly the premise of an ([) inference with a variable subject, and end at an axiom for a variable x. This is all that is possible since P is am. Let the axiom for x be

For each type A there exists an integer n s.t. for any closed beta normal M such that ⊢M:A in BCD M has class n.

by induction on the length of an am proof of F⊢X:A using the class lemma. End of proof. ∎

(thinning) Suppose that P is an am proof of F,x:B⊢X:A where X is in beta normal form and the principal atoms of B do not occur in either A or any F(y) for y:dom(F). Then x does not occur in P.

By induction on P. End of proof. ∎

Defintion 8.12 If A is dnf and S is a subset of hc(A) then A−S is obtained by deleting the members of S from A and the corresponding arrows if entire lhs’s are deleted.

by induction on the length of an am proof P. let

and suppose that y=∖z1…zm. zZ1…Zi. W.l.o.g and may assume P does to end in ∧ and Bi does not begin with ∧. Suppose that Y is not yi. We then consider the left most path of P. Beginning at the top this path consists of 0 or 1 application [, followed by 1 application of →E followed by m applications of →I. Now write Bi=

Now since Ai [ Bi, by functionality, Ai has a unique component

with principal type b. This accounts for the two possible occurrences of b so z=y1, and we have for i=1,…,q Ei [ Di Le G=

Then the axiom at the top of the leftmost path is

Construction; Suppose that X is in beta normal form with free variables x1,…,xk. We construct co-functional types A1,…,Ak, and a functional type A such that if F is the basis such that F(xi)=Ai then F⊢X:A. We construct the types by recursion; it will be convenient not to identify different free occurrences of each variable xi until xi becomes bound, so that the Ai do not have strictly positive occurrences of ∧ until binding. Thus, in F,xi may have several types not beginning with ∧. This is only a convenience.

then X is unique.

where m<l+1. There are two cases which are determined by A alone.

where B(i) [ B′(i) and the conclusion of the [ on the leftmost path of P (if it exists, otherwise Ai=C) is G⊢z:C. Now the lemma applies, and if

by shorter am proofs than P, and

is functional so our induction hppothesis applies.

by the construction of a functional type above and the uniqueness lemma, the theorem follows for M already beta normal. We must show that this extends to all strongly normalizable M. To this end we will consider a standard reduction from a strongly normalizable Y to its beta normal form X. This is sufficient by eta postponement and the construction above. For one step Y→Z↠X we will have as an induction hypothesis F⊢Z:A where for each x:dom(F), F(x) is co functional, A is functional,and if range(F)= B1,…,Bl then

is functional. We will show that there exists G, B such that G⊢Y:B, where for each x:dom(G),G(x) is co functional, B is functional and if range(G)=C1,…,Cm then C1→(…(Cm→B)…) is functional.Indeed F,G,A,B will be related in the following way