On sets of linear forms of maximal complexity

We present a uniform description of sets of m linear forms in n variables over the field of rational numbers whose computation requires m(n - 1) additions. 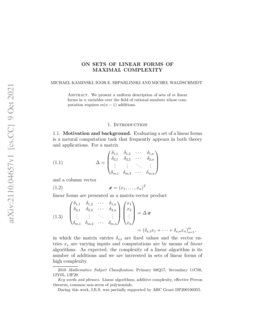 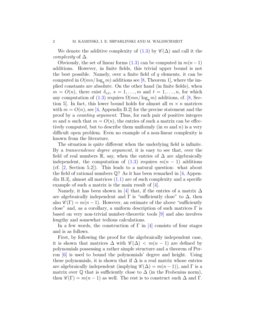 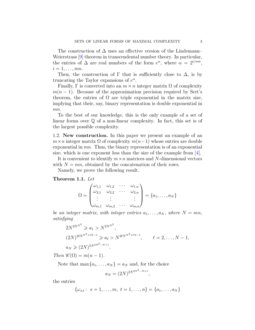 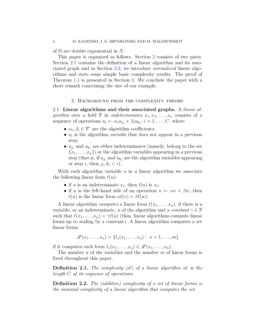 Explicit Bounds for Linear Forms in the Exponentials of Algebraic Numbers

Coloured Graphical Models and their Symmetries

Derandomization and absolute reconstruction for sums of powers of linear forms

We study the decomposition of multivariate polynomials as sums of powers...
Pascal Koiran, et al. ∙

Working times in atypical forms of employment: the special case of part-time work

In the present article, we attempt to devise a typology of forms of part...
Patrick Letrémy, et al. ∙

Approximation of subsets of natural numbers by c.e. sets

The approximation of natural numbers subsets has always been one of the ...
Mohsen Mansouri, et al. ∙

This research suggests an add-on to empower Google Forms to be an automa...
Pornpat Sirithumgul, et al. ∙

Characterizations of Two-Points and Other Related Distributions

Evaluating a set of a linear forms is a natural computation task that frequently appears in both theory and applications. For a matrix

and a column vector

linear forms are presented as a matrix-vector product

in which the matrix entries δs,t are fixed values and the vector entries xs are varying inputs and computations are by means of linear algorithms. As expected, the complexity of a linear algorithm is its number of additions and we are interested in sets of linear forms of high complexity.

Obviously, the set of linear forms (1.3) can be computed in m(n−1) additions. However, in finite fields, this trivial upper bound is not the best possible. Namely, over a finite field of q elements, it can be computed in O(mn/logqm) additions see [8, Theorem 1], where the implied constants are absolute. On the other hand (in finite fields), when m=O(n), there exist δs,t, s=1,…,m and t=1,…,n, for which any computation of (1.3) requires Ω(mn/logqm) additions, cf. [8, Section 5]. In fact, this lower bound holds for almost all m×n matrices with m=O(n), see [4, Appendix B.2] for the precise statement and the proof by a counting argument. Thus, for each pair of positive integers m and n such that m=O(n), the entries of such a matrix can be effectively computed, but to describe them uniformly (in m and n) is a very difficult open problem. Even no example of a non-linear complexity is known from the literature.

The situation is quite different when the underlying field is infinite. By a transcendence degree argument, it is easy to see that, over the field of real numbers R, say, when the entries of Δ are algebraically independent, the computation of (1.3) requires m(n−1) additions (cf. [2, Section 5.2]). This leads to a natural question: what about the field of rational numbers Q? As it has been remarked in [4, Appendix B.3], almost all matrices (1.1) are of such complexity and a specific example of such a matrix is the main result of [4].

Namely, it has been shown in [4] that, if the entries of a matrix Δ are algebraically independent and Γ is “sufficiently close” to Δ, then also C(Γ)=m(n−1)

. However, an estimate of the above “sufficiently close” and, as a corollary, a uniform description of such matrices

Γ is based on very non-trivial number-theoretic tools [9] and also involves lengthy and somewhat tedious calculations.

In a few words, the construction of Γ in [4] consists of four stages and is as follows.

First, by following the proof for the algebraically independent case, it is shown that matrices Δ with C(Δ)<m(n−1) are defined by polynomials possessing a rather simple structure and a theorem of Perron [6] is used to bound the polynomials’ degree and height. Using these polynomials, it is shown that if Δ is a real matrix whose entries are algebraically independent (implying C(Δ)=m(n−1)), and Γ is a matrix over Q that is sufficiently close to Δ (in the Frobenius norm), then C(Γ)=m(n−1) as well. The rest is to construct such Δ and Γ.

The construction of Δ uses an effective version of the Lindemann–Weierstrass [9] theorem in transcendental number theory. In particular, the entries of Δ are real numbers of the form eα, where α=2i/mn, i=1,…,mn.

Then, the construction of Γ that is sufficiently close to Δ, is by truncating the Taylor expansions of eα.

Finally, Γ is converted into an m×n integer matrix Ω of complexity m(n−1). Because of the approximation precision required by Sert’s theorem, the entries of Ω are triple exponential in the matrix size, implying that their, say, binary representation is double exponential in mn.

To the best of our knowledge, this is the only example of a set of linear forms over Q of a non-linear complexity. In fact, this set is of the largest possible complexity.

In this paper we present an example of an m×n integer matrix Ω of complexity m(n−1) whose entries are double exponential in mn. Thus, the binary representation is of an exponential size, which is one exponent less than the size of the example from [4].

It is convenient to identify m×n matrices and N-dimensional vectors with N=mn, obtained by the concatenation of their rows.

Namely, we prove the following result.

be an integer matrix, with integer entries a1,…,aN, where N=mn, satisfying

of Ω are double exponential in N.

This paper is organized as follows. Section 2 consists of two parts. Section 2.1 contains the definition of a linear algorithm and its associated graph and in Section 2.2, we introduce normalized linear algorithms and state some simple basic complexity results. The proof of Theorem 1.1 is presented in Section 3. We conclude the paper with a short remark concerning the size of our example.

2. Background from the complexity theory

2.1. Linear algorithms and their associated graphs

A linear algorithm over a field F in indeterminates x1,x2,…,xn consists of a sequence of operations ui←αiuji+βiuki, i=1,…,C, where

With each algorithm variable u in a linear algorithm we associate the following linear form ℓ(u):

The number n of the variables and the number m of linear forms is fixed throughout this paper.

The complexity |A| of a linear algorithm A is the length C of its sequence of operations.

With a linear algorithm A we associate a labelled directed acyclic graph GA(VA,EA), whose set of vertices is the union of {x1,…,xn} and the set of the variables of A and there is an edge from vertex v to vertex u, if there is an operation of the form u←αv+βw or the form u←αw+βv. In the former case, the edge is labelled α and, in the latter case, it is labelled β, see Figure 2.1 below.

We denote the label of edge e by λ(e).

The following correspondence between linear algorithms and their associated graphs is well-known from the literature, see, for example, [2, Remark 13.19].

be a linear algorithm and let ΠA(xt,ui) denote the set of all paths of edges from the indeterminate xt to the algorithm variable ui in GA. Then

A linear algorithm is normalized if in each its operation

We say that a label is proper if it is a proper coefficient of the algorithm.

The result below immediately follows from Definition 2.4 and the definition of the associated graph GA of an algorithm A.

The additive complexity of a normalized linear algorithm A equals to the number of proper labels of its associated graph GA.

Furthermore, we also have the following result, given in [4, Proposition 6].

From now on, by Lemma 2.6, we assume that all linear algorithms under consideration are normalized.

The proof is based on

To formulate a fully explicit form of the Perron theorem [6] we introduce the following definition below.

We start with the following result, that is essentially due to Perron [6], (see also [7, Theorem 1.1] for a self-contained proof).

We also use H(P) for the naive height of a polynomial P over C (in one or several variables), that is, the largest absolute value of ist coefficients.

We recall the following result given in [4, Proposition 23].

There exists another annihilating polynomial

of P1,…,PN of degree and height

3.3. Complexity of linear forms and vanishing of polynomials

The first step in the proof of Theorem 1.1 is similar to that in [4]. It also resembles some previous results of this type, see, for example, [2, Lemma 9.28], however it seems to be new.

If C(Δ)<m(n−1), then for some nonzero polynomial with integer coefficients P(Z1,1,…,Zm,n) of degree and height

Recall that we represent a linear from ℓ(x1,…,xn)=∑nt=1δtxt by the product (δ1,…,δn)\boldmathx, where x is the (column) vector of the indeterminates x1,…,xn as in (1.2). Similarly, we represent a set of linear forms

Let A be a linear algorithm that computes (1.3) and let GA=(VA,EA) be its associated labelled graph.

Let uis and γs, s=1,…,m, be the algorithm variables and the respective constants such that

If the number |A| of the proper labels is less than m(n−1), then the total number of β and γ variables is less than mn — see Lemma 2.5, implying that these mn polynomials are algebraically dependent.

Let P(Z1,1,…,Zm,n) be a polynomial with integer coefficient such that

Thus, using simple estimates of binomials coefficients, we derive from Lemmas 3.2 and 3.3, that we may assume that

(we also refer to [4, Corollary 24] for the detailed calculations).

which concludes the proof. ∎

3.4. Zeros and non-zeros of polynomials

The following bound on zeros of polynomials is very well known, see, for example, [5, Theorem 4.2].

We now establish our main technical tool. We note that results of similar flavour about non-vanishing of polynomials can be found in [3], but the result below seems to be new.

Let P(Z1,…,ZN) be a polynomial with integer coefficients of degree d⩾3 and height H. Then, for integers

The proof is by induction on N. The case N=1 plainly follows from the Lemma 3.5, since a1⩾H+1. Assume that N⩾2 and that the result holds for N−1.

The polynomials Pj(X1,…,XN−1)∈Z[X1,…,XN−1] have degree at most d and height at most H. One of them is not zero. From the induction hypothesis, we deduce that the integers Pj(a1,…,aN−1) with 0⩽j⩽d are not all 0. Hence the polynomial

is not zero. Its degree is at most d. We claim that the height of Q is strictly less than 2HadN−1.

which proves the claim on the height of Q.

From a1⩾2 and from aℓ⩾2adℓ−1, by a straightforward induction we conclude that

As a consequence, we have

Using the assumption aN⩾2HadN−1 together with the Lemma 3.5, we conclude Q(aN)≠0 and the result follows. ∎

We just checks that the conditions of Lemma 3.6 are satisfied if one selects the integers a1,…,ad satisfying

as for the polynomial P of Lemma 3.4 we conclude the proof.

Even though, if the degree and the height of the “annihilating” polynomial P from the proof of Lemma 3.4 can be reduced, the entries of Ω in Theorem 1.1 remain double exponential in N. Of course it would be interesting to find an example, it it exists, that is only polynomial in the matrix size. However, it is to be expected that this challenge requires a different approach.