On robust stopping times for detecting changes in distribution

Let X_1,X_2,... be independent random variables observed sequentially and such that X_1,...,X_θ-1 have a common probability density p_0, while X_θ,X_θ+1,... are all distributed according to p_1≠ p_0. It is assumed that p_0 and p_1 are known, but the time change θ∈Z^+ is unknown and the goal is to construct a stopping time τ that detects the change-point θ as soon as possible. The existing approaches to this problem rely essentially on some a priori information about θ. For instance, in Bayes approaches, it is assumed that θ is a random variable with a known probability distribution. In methods related to hypothesis testing, this a priori information is hidden in the so-called average run length. The main goal in this paper is to construct stopping times which do not make use of a priori information about θ, but have nearly Bayesian detection delays. More precisely, we propose stopping times solving approximately the following problem: & Δ(θ;τ^α)→_τ^α subject to α(θ;τ^α)<α for any θ>1, where α(θ;τ)=P_θ{τ<θ} is the false alarm probability and Δ(θ;τ)=E_θ(τ-θ)_+ is the average detection delay, that and (1+o(1))(θ/α), as θ/α and explain why such stopping times are robust w.r.t. a priori information about θ. 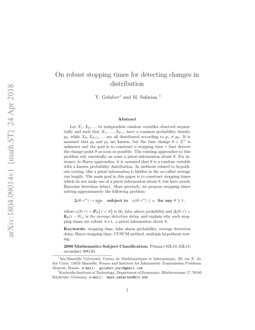 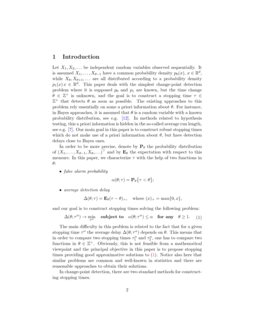 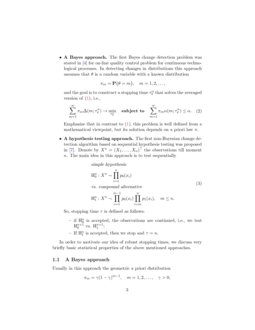 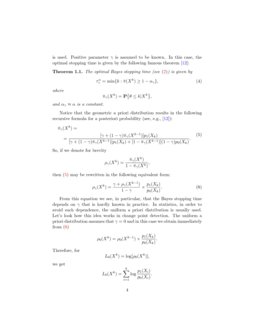 Let X1,X2,… be independent random variables observed sequentially. It is assumed X1,…,Xθ−1 have a common probability density p0(x),x∈Rd, while Xθ,Xθ+1,… are all distributed according to a probability density p1(x)x∈Rd. This paper deals with the simplest change-point detection problem where it is supposed p0 and p1 are known, but the time change θ∈Z+ is unknown, and the goal is to construct a stopping time τ∈Z+ that detects θ as soon as possible. The existing approaches to this problem rely essentially on some a priori information about θ. For instance, in Bayes approaches, it is assumed that θ is a random variable with a known probability distribution, see e.g. [12]. In methods related to hypothesis testing, this a priori information is hidden in the so-called average run length, see e.g. [7]. Our main goal in this paper is to construct robust stopping times which do not make use of a priori information about θ, but have detection delays close to Bayes ones.

In order to be more precise, denote by Pθ the probability distribution of (X1,…,Xθ−1,Xθ,…)⊤ and by Eθ the expectation with respect to this measure. In this paper, we characterize τ with the help of two functions in θ:

and our goal is to construct stopping times solving the following problem:

The main difficulty in this problem is related to the fact that for a given stopping time τα the average delay Δ(θ;τα) depends on θ. This means that in order to compare two stopping times τα1 and τα2, one has to compare two functions in θ∈Z+. Obviously, this is not feasible from a mathematical viewpoint and the principal objective in this paper is to propose stopping times providing good approximative solutions to (1). Notice also here that similar problems are common and well-known in statistics and there are reasonable approaches to obtain their solutions.

In change-point detection, there are two standard methods for constructing stopping times.

In order to motivate our idea of robust stopping times, we discuss very briefly basic statistical properties of the above mentioned approaches.

Usually in this approach the geometric a priori distribution

is used. Positive parameter γ is assumed to be known. In this case, the optimal stopping time is given by the following famous theorem [12]:

The optimal Bayes stopping time (see (2)) is given by

and αγ≈α is a constant.

Notice that the geometric a priori distribution results in the following recursive formula for a posteriori probability (see, e.g., [12]):

So, if we denote for brevity

then (5) may be rewritten in the following equivalent form:

From this equation we see, in particular, that the Bayes stopping time depends on γ that is hardly known in practice. In statistics, in order to avoid such dependence, the uniform a priori distribution is usually used. Let’s look how this idea works in change point detection. The uniform a priori distribution assumes that γ=0 and in this case we obtain immediately from (6)

Hence, the optimal stopping time in the case of the uniform a priori distribution is given by

, in detecting change in the Gaussian distribution with

Computing the false alarm probability for this stopping time is not difficult and based on the following simple fact. Let

It follows immediately from the definition of ϕ(λ) that if λ=1, then ϕ(λ)=1. So, by this Lemma we get

As to the average detection delay, it can be easily computed with the help of the famous Wald identity [14, 2]. The next theorem summarizes principal properties of τα∘. Let us assume that

Fig. 1 illustrates this theorem showing L0(Xk),k=1,…,200, in the case of the change in the mean of the Gaussian distribution with θ=80.

We would like to emphasize that the fact that Δ(θ;τα∘) is linear in θ is not good from practical and theoretical viewpoints. In order to understand why it is so, let us now turn back to the Bayes setting assuming that γ>0. In this case the following theorem holds true.

This theorem may be proved with the help of the standard techniques described, e.g., in [1].

Fig. 2 illustrates typical behavior of log[ργ(Xk)] with γ>0. Notice that if τα∘ is used in the considered case, then we obtain by (8)

So, we see that this mean detection delay is far away from the optimal Bayes one given by

In view of these facts it is clear that the standard Bayes technique cannot provide reasonable solutions to (1).

The idea of this approach is based on the well-known sequential testing of two simple hypothesis [15]. However, we would like to emphasize that in contrast to the standard setting in [15]

, in the change-point detection, this approach has a rather heuristic character since here we test a simple hypothesis versus a compound alternative whose complexity grows with the observations volume.

In sequential hypothesis testing there are two common methods

The threshold tα is computed as follows

where α is the first type error probability. Notice that by Lemma 1.1

This method is usually called CUSUM algorithm. It is well known that it is optimal in Lorden [5] sense, i.e., for properly chosen α, ταml minimizes

However, with this method cannot control the false alarm probability as shows the following theorem.

The Bayesian test is based on the assumption that θ

the test statistics in (

So, the corresponding stopping time is given by

In the literature, this method is known as Shirayev-Roberts (SR) algorithm. It was firstly proposed in [11] and [10]. In [8] and [3] it was shown that it minimizes the integral average delay

over all stopping times τ with E∞τ≥T. More detailed statistical properties of SR procedure can be found in [9].

As one can see on Fig. 3, in practice, there is no significant difference between CUSUM and SR algorithms.

The main idea in this paper is to make use of multiple hypothesis testing methods for constructing stopping times. This can be done very easily by replacing the constant threshold in the ML test (9) by one depending on k. So, we define the stopping time

In order to control the false alarm probability and to obtain a nearly minimal average detection delay, we are looking for a minimal function tα(k), k=1,2,…, such that

We begin our construction of tα(k) with the following function:

and define m-iterated φ(⋅) by

The next theorem plays a cornerstone role in our construction of robust stopping times.

Therefore we can define the quantile of order

Fig. 4 shows the distribution functions and quantiles of ζ1,ϵ for ϵ={0.01,0.2,1} computed with the help of Monte-Carlo method.

The next theorem describes principal properties of the stopping time

where dαm,ϵ(θ) is a solution to

Remark. It is easy to check with a simple algebra that for any given θ>1

w.r.t. a priori geometric distribution of

Then, averaging (14) w.r.t. this distribution, we obtain

where ταγ is the optimal Bayesian stopping time (see Theorem 1.1).

is a martingale with E∞Yk=1, we have

In what follows we denote by ek be i.i.d. standard exponential random variables.

It is easy to check with a simple algebra that for any u∈[0,1)

Therefore with this inequality we obtain

It follows immediately from the definition of bm,ϵ, see (12), that

Therefore, substituting the above equations in (15), we complete the proof. ∎

are independent. Since bm,ϵ(k) is non-decreasing in k and obviously κk≥k, we get

Therefore, to finish the proof, it suffices to notice that by (10) and Lemma 1.1

Theorem 2.1 follows now immediately from Lemmas A.1, A.2.

Next, we obtain by Wald’s identity

It follows immediately from Theorem 2.1 that as α→0

So, our next step is to upper bound bm,ϵ(⋅). First, notice that

It is also easy to check that