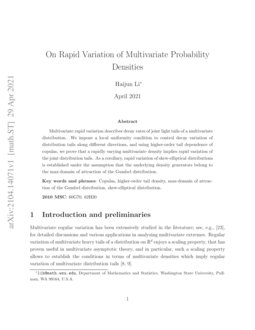 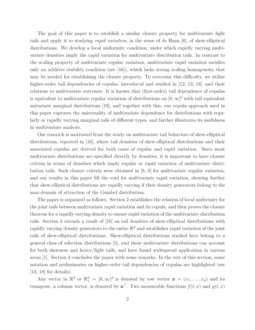 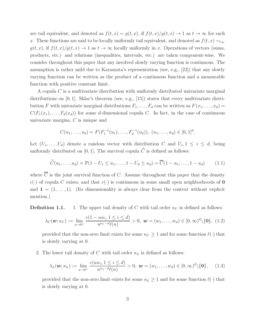 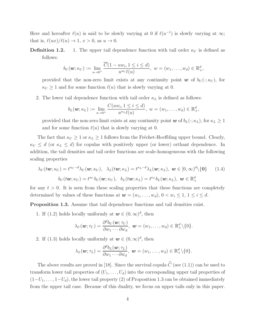 Connections between representations for multivariate extremes

In this short note, we develop a local approximation for the log-ratio o...
Frédéric Ouimet, et al. ∙

We derive the asymptotic rate of decay to zero of the tail dependence of...
Thomas Fung, et al. ∙

We introduce some new indexes to measure the departure of any multivaria...
Célestin C. Kokonendji, et al. ∙

The basic goal of computer engineering is the analysis of data. Such dat...
Krzysztof Domino, et al. ∙

, and together with this, our copula approach used in this paper captures the universality of multivariate dependence for distributions with regularly or rapidly varying marginal tails of different types, and further illustrates its usefulness in multivariate analysis.

Rd or Rd+=[0,∞)d is denoted by row vector x=(x1,…,xd) and its transpose, a column vector, is denoted by x⊤. Two measurable functions f(t,x) and g(t,x) are tail equivalent, and denoted as f(t,x)∼g(t,x), if f(t,x)/g(t,x)→1 as t→∞ for each x. These functions are said to be locally uniformly tail equivalent, and denoted as f(t,x)∼l.u.g(t,x), if f(t,x)/g(t,x)→1 as t→∞ locally uniformly in x. Operations of vectors (sums, products, etc.) and relations (inequalities, intervals, etc.) are taken component-wise. We consider throughout this paper that any involved slowly varying function is continuous. The assumption is rather mild due to Karamata’s representation (see, e.g., [23]) that any slowly varying function can be written as the product of a continuous function and a measurable function with positive constant limit.

[0,1]. Sklar’s theorem (see, e.g., [15]) states that every multivariate distribution F with univariate marginal distributions F1,…,Fd can be written as F(x1,…,xd)=C(F1(x1),…,Fd(xd)) for some d-dimensional copula C. In fact, in the case of continuous univariate margins, C is unique and

Let (U1,…,Ud) denote a random vector with distribution C and Ui,1≤i≤d, being uniformly distributed on [0,1]. The survival copula ˆC is defined as follows:

where ¯¯¯¯C is the joint survival function of C. Assume throughout this paper that the density c(⋅) of copula C exists, and that c(⋅) is continuous in some small open neighborhoods of 0 and 1=(1,…,1). (Its dimensionality is always clear from the context without explicit mention.)

The fact that κU≥1 or κL≥1 follows from the Fréchet-Hoeffding upper bound. Clearly, κU≤d (or κL≤d) for copulas with positively upper (or lower) orthant dependence. In addition, the tail densities and tail order functions are scale-homogeneous with the following scaling properties

where fi is the density of the i-th marginal distribution Fi, and 0<ai<∞ is a constant, 1≤i≤d, with a1=1. Note that (2.1) implies the usual tail equivalence of the marginal survival functions,

Assume now that the marginal density fi, 1≤i≤d, is continuous and satisfies

where the self-neglecting function mi(⋅) can be taken to be a differentiable function for which its derivative converges to 0 ([3, 7]). According to Bloom’s theorem (see [4]),

The following two results, obtained in [20], are used in deriving our main results.

It is worth mentioning that Omey in [20] obtained the stronger results, but the descriptions in Lemmas 2.1 and 2.2 suit our purpose.

Lemma 2.1 implies that the convergences

The following result is needed in analyzing multivariate tails of F via our copula approach.

This result was obtained in [18] on [0,∞)d∖{0}, but can be extended to Rd using the same proof. In fact, a stronger result in which the convergence for a tail density holds locally uniformly on Rd can be obtained as follows.

converge locally uniformly in x∈Rd. Since c(⋅) is ultimately continuous at 1, the Heine-Cantor theorem implies that for any small ϵ>0, there exists an N1 such that when t>N1, for all x∈B⊂Rd, where B is compact,

It follows from the tail equivalency and Lemma 2.1 that

converge locally uniformly in x∈Rd. Since c(⋅) is ultimately continuous at 1, the Heine-Cantor theorem implies that for any small ϵ>0, there exists an N1 such that when t>N1, for all x∈B⊂Rd, where B is compact,

The other ingredient of our copula method is the integration form of Proposition 1.3.

Assume that tail dependence functions and tail densities of a copula C exist.

The local uniformity of (1.2) implies that the tail density λU(⋅;τU) is integrable on the compact subset {x≤w:∧di=1xi≥ϵ} for any fixed small ϵ>0 and any fixed w∈Rd+∖{0}, where ∧di=1xi=min{xi,1≤i≤d}. Since (1.2) converges locally uniformly and c(⋅) is ultimately continuous at 1, ∂|S|bU(w;τU)/∂wS is continuous in w, for any subset S⊆{1,…,d}. Because Rd is locally compact, the Heine-Cantor theorem implies that ∂|S|bU(w;τU)/∂wS is locally uniformly continuous in w, for any subset S⊆{1,…,d}, which further implies via differentiablity of local uniform convergence that

It follows from Fatou’s lemma that