On Ramsey numbers of hedgehogs 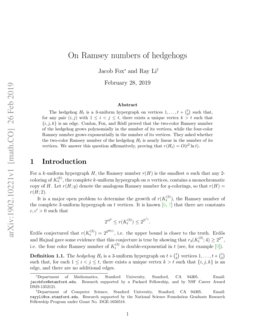 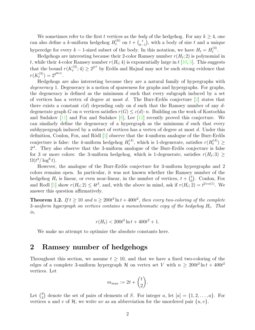 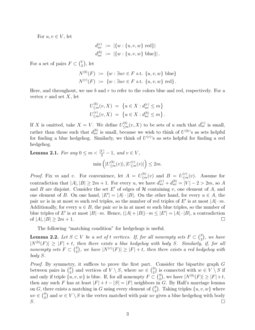 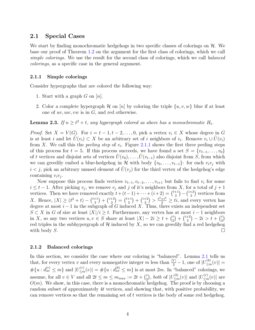 It is a major open problem to determine the growth of r(K(3)t), the Ramsey number of the complete 3-uniform hypergraph on t vertices. It is known [6, 7] that there are constants c,c′>0 such that

Erdős conjectured that r(K(3)t)=22Θ(t), i.e. the upper bound is closer to the truth. Erdős and Hajnal gave some evidence that this conjecture is true by showing that r3(K(3)t;4)≥22ct, i.e. the four color Ramsey number of K(3)t is double-exponential in t (see, for example [9]).

We sometimes refer to the first t vertices as the body of the hedgehog. For any k≥4, one can also define a k-uniform hedgehog H(k)t on t+(tk−1), with a body of size t and a unique hyperedge for every k−1-sized subset of the body. In this notation, we have Ht=H(3)t.

However, the analogue of the Burr-Erdős conjecture for 3-uniform hypergraphs and 2 colors remains open. In particular, it was not known whether the Ramsey number of the hedgehog Ht is linear, or even near-linear, in the number of vertices, t+(t2). Conlon, Fox and Rodl [5] show r(Ht;2)≤4t3, and, with the above in mind, ask if r(Ht;2)=t2+o(1). We answer this question affirmatively.

If t≥10 and n≥200t2lnt+400t2, then every two-coloring of the complete 3-uniform hypergraph on vertices contains a monochromatic copy of the hedgehog Ht. That is,

We make no attempt to optimize the absolute constants here.

Throughout this section, we assume t≥10, and that we have a fixed two-coloring of the edges of a complete 3-uniform hypergraph H on vertex set V with n≥200t2lnt+400t2 vertices. Let

Here, and throughout, we use b and r to refer to the colors blue and red, respectively. For a vertex v and set X, let

The following “matching condition” for hedgehogs is useful.

By symmetry, it suffices to prove the first part. Consider the bipartite graph G between pairs in (S2) and vertices of V∖S, where uv∈(S2) is connected with w∈V∖S if and only if triple {u,v,w} is blue. If, for all nonempty F⊂(S2), we have |N(b)(F)|≥|F|+t, then any such F has at least |F|+t−|S|=|F| neighbors in G. By Hall’s marriage lemma on G, there exists a matching in G using every element of (S2). Taking triples {u,v,w} where uv∈(S2) and w∈V∖S is the vertex matched with pair uv gives a blue hedgehog with body S. ∎

Consider hypergraphs that are colored the following way:

If n≥t2+t, any hypergraph colored as above has a monochromatic Ht.

Set X=V(G). For i=t−1,t−2,…,0, pick a vertex vi∈X whose degree in G is at least i and let ^U(vi)⊂X be an arbitrary set of i neighbors of vi. Remove vi∪^U(vi) from X. We call this the peeling step of vi. Figure 1 shows the first three peeling steps of this process for t=5. If this process succeeds, we have found a set S={vt−1,…,v0} of t vertices and disjoint sets of vertices ^U(v0),…,^U(vt−1) also disjoint from S, from which we can greedily embed a blue-hedgehog in H with body {v0,…,vt−1}: for each vivj with i<j, pick an arbitrary unused element of ^U(vj) for the third vertex of the hedgehog’s edge containing vivj.

vertices, and showing that, with positive probability, we can remove vertices so that the remaining set of

t vertices is the body of some red hedgehog.

Then H has a red hedgehog Ht.

It suffices to prove for n=40ct2, so assume without loss of generality that n=40ct2. Pick a random set S by including each vertex of V in S independently with probability 4t/n. By the Chernoff bound, Pr\/[|S|≤3t]≤e−t/8.

the indicator random variables for these pairs being in

The first inequality is by (8) and the second is by Chebyshev’s inequality. By the union bound over the multiples of t in [2t,mmax], of which there are less than t, the probability there exists some m∈[2t,mmax] a multiple of t with

Then, for all m with 2t≤m≤mmax−t, set m′ to be the smallest multiple of t larger than m, so that

To prove Theorem 1.2, we follow the proof of Lemma 2.3. First, “peel off” vertices v into a set S to try to find a blue or red hedgehog.111 For technical reasons, we peel vertices to find both blue and red hedgehogs, as opposed to Lemma 2.3 where we only peeled vertices to find a blue hedgehog. If we succeed, we are done. If we fail, we end up with an induced two-colored hypergraph that is “balanced” in the sense of Lemma 2.4. In this case, we simply apply Lemma 2.4.

In the proof of Lemma 2.3, we started with X=V and iteratively removed from X a vertex v and a set ^U(v) of size t such that, for all u∈^U(v), vertices u and v share many blue triples. This deletes O(t) vertices per round, which is small enough for the argument to succeed. For general hypergraphs, we peel off vertices v with many “blue-heavy neighbors”, meaning there exists some m such that |U(b)≤m(v,X)|≥10m.222 For technical reasons, we peel vertices v in increasing order of the corresponding m. However, m can be Θ(t2), so if we simply deleted v along with 10m of its blue-heavy neighbors ^U(b)(v)⊂U(b)≤m(v,X), we could delete Θ(t2) vertices for every v, which is too many. Instead, when we peel off v, we delete v from X, add a penalty of t/m to each u∈^U(b)(v), accumulated as α(b)(u), and delete from X every vertex u with α(b)(u)≥1/2. With these penalties, we guarantee that, on average, we delete O(t) vertices from X per peeled vertex v.

To finish the proof, we show, if our peeling produces a set S(b)={v1,…,vt} (where vi is chosen before vi+1), then, because we track the penalties α(b)(u) and β(b)(w) carefully, the matching condition of Lemma 2.2 holds. On the other hand, if the peeling procedure fails, the subhypergraph induced by X is large and balanced, in which case we apply Lemma 2.4.

We first establish the following facts about the procedure.

2.2.4 Bounding the number of deleted vertices

where, for the last inequality, we used mv≤t2 and t≥10. This is what we wanted to show. ∎

The total number of vertices deleted from X in the peeling procedure is at most 200t2lnt.

We conclude that, at the end of the procedure,