The purposes of this note are the following two; we first generalize Okada-Takeuti's well quasi ordinal diagram theory, utilizing the recent result of Dershowitz-Tzameret's version of tree embedding theorem with gap conditions. Second, we discuss possible use of such strong ordinal notation systems for the purpose of a typical traditional termination proof method for term rewriting systems, especially for second-order (pattern-matching-based) rewriting systems including a rewrite-theoretic version of Buchholz's hydra game. 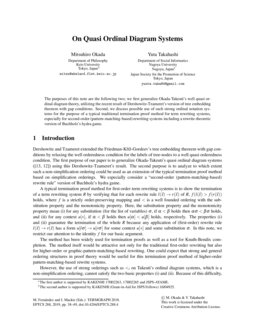 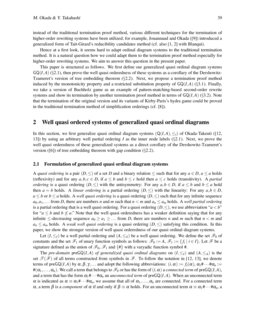 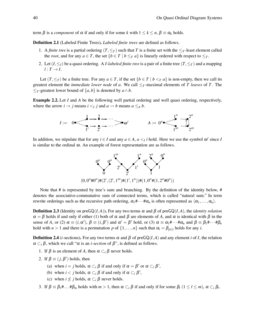 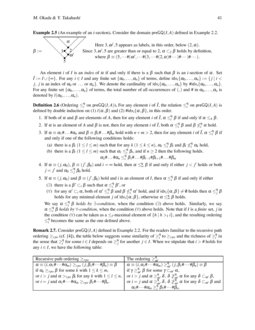 Dershowitz and Tzameret extended the Friedman-Kříž-Gordeev’s tree embedding theorem with gap conditions by relaxing the well orderedness condition for the labels of tree-nodes to a well quasi orderedness condition. The first purpose of our paper is to generalize Okada-Takeuti’s quasi ordinal diagram systems ([14, 13]) using this Dershowitz-Tzameret’s result. The second purpose is to analyze to which extent such a non-simplification ordering could be used as an extension of the typical termination proof method based on simplification orderings. We especially consider a “second-order (pattern-matching-based) rewrite rule” version of Buchholz’s hydra game.

A typical termination proof method for first-order term rewriting systems is to show the termination of a term rewriting system R by verifying that for each rewrite rule l(→x)→r(→x) of R, f(l(→x)>f(r(→x)) holds, where f is a strictly order-preserving mapping and < is a well founded ordering with the substitution property and the monotonicity property. Here, the substitution property and the monotonicity property mean (i) for any substitution (for the list of variables) σ, if α<β holds then ασ<βσ holds, and (ii) for any context u[∗], if α<β holds then u[α]<u[β] holds, respectively. The properties (i) and (ii) guarantee the termination of the whole R because any application of (first-order) rewrite rule l(→x)→r(→x) has a form u[lσ]→u[rσ] for some context u[∗] and some substitution σ. In this note, we restrict our attention to the identity f for our basic argument.

The method has been widely used for termination proofs as well as a tool for Knuth-Bendix completion. The method itself would be attractive not only for the traditional first-order rewriting but also for higher-order or graphic-pattern-matching-based rewriting. One could expect that strong and general ordering structures in proof theory would be useful for this termination proof method of higher-order pattern-matching-based rewrite systems.

However, the use of strong orderings such as <_i on Takeuti’s ordinal diagram systems, which is a non-simplification ordering, cannot satisfy the two basic properties (i) and (ii). Because of this difficulty, instead of the traditional termination proof method, various different techniques for the termination of higher-order rewriting systems have been utilized; for example, Jouannaud and Okada ([10]) introduced a generalized form of Tait-Girard’s reducibility candidates method (cf. also [2, 3] with Blanqui).

Hence at a first look, it seems hard to adapt ordinal diagram systems to the traditional termination method. It is a natural question how we could adapt them to the termination proof method especially for higher-order rewriting systems. We aim to answer this question in the present paper.

This paper is structured as follows. We first define our generalized quasi ordinal diagram systems GQ(I,A) (§2.1), then prove the well quasi orderedness of these systems as a corollary of the Dershowitz-Tzameret’s version of tree embedding theorem (§2.2). Next, we propose a termination proof method induced by the monotonicity property and a restricted substitution property of GQ(I,A) (§3.1). Finally, we take a version of Buchholz game as an example of pattern-matching-based second-order rewrite systems and show its termination by another termination proof method in terms of GQ(I,A) (§3.2). Note that the termination of the original version and its variants of Kirby-Paris’s hydra game could be proved in the traditional termination method of simplification orderings (cf. [9]).

In this section, we first generalize quasi ordinal diagram systems (Q(I,A),≤_i) of Okada-Takeuti ([13, 14]) by using an arbitrary well partial ordering I as the inner node labels (§2.1). Next, we prove the well quasi orderedness of these generalized systems as a direct corollary of the Dershowitz-Tzameret’s version ([7]) of tree embedding theorem with gap condition (§2.2).

Let (T,≤_T) be a finite tree. For any a∈T, if the set {b∈T∣b<_Ta} is non-empty, then we call its greatest element the immediate lower node of a. We call ≤_T-maximal elements of T leaves of T. The ≤_T-greatest lower bound of {a,b} is denoted by a∧b.

Let I and A be the following well partial ordering and well quasi ordering, respectively, where the arrow i→j means i<_Ij and a⇝b means a≤_Ab.

In addition, we stipulate that for any i∈I and any a∈A, a<_Ii hold. Here we use the symbol ω′ since I is similar to the ordinal ω. An example of forest representation are as follows.

Note that # is represented by tree’s sum and branching. By the definition of the identity below, # denotes the associative-commutative sum of connected terms, which is called “natural sum.” In term rewrite orderings such as the recursive path ordering, α_1#⋯#α_n is often represented as ⟨α_1,…,α_n⟩.

For any two terms α and β of preGQ(I,A) and any element i of I, the relation α⊂_iβ, which we call “α is an i-section of β”, is defined as follows.

Consider preGQ(I,A) defined in Example 2.2. For the readers familiar to the recursive path ordering ≥_rpo (cf. [5]), the table below suggests some similarity of ≥_iq to ≥_rpo and the richness of ≥_iq in the sense that ≥_iq for some i∈I depends on ≥_jq for another j∈I. When we stipulate that i># holds for any i∈I, we have the following table:

For any well partial ordering I, any well quasi ordering A and any element i of ~I,

For any two terms α,β of preGQ(I,A), α⋘β holds if and only if α<q_iβ holds for any element i of ~I.

Let ⋘= be the reflexive closure of ⋘. It is obvious that (preGQ(I,A),⋘=) is a quasi ordering and that for any α and β, α⋘β holds if and only if both α⋘=β and β⋘/=α holds.

This kind of counterexamples is blocked if we restrict the pre-domains preGQ(I,A) to the path comparable tree-domains GQ(I,A). In the rest of this subsection and the next subsection, we assume that pre-domains preGQ(I,A) satisfy the following conditions: I∩A=∅ and a<_Ii holds for any i∈I and any a∈A. In addition, we identify a connected term α of preGQ(I,A) with a labeled finite tree ((T,≤_T),l_T) in the manner of Example 2.2. For any quasi ordering (A,≤_A) and any two elements a_1,a_2 of A, we say a_1 is comparable with a_2 if and only if a_1≤_Aa_2 or a_2≤_Aa_1 holds.

The following is an example of Dershowitz-Tzameret’s tree embedding (cf. [7, p.87]).

Next, we extend this tree embedding to forests, namely, unconnected gqod’s and show that α⋘=β holds whenever α is embedded into β in the sense of this forest embedding.

We prove Proposition 2.18 by induction on l(α). The base case is obvious. If α is unconnected, then the proposition immediately follows from IH. Suppose that α≡(i_1,α′) holds. By the definition of ↪#, it suffices to prove the proposition when β is a connected gqod (i_2,β′). In this case, the proposition follows from the following two claims: For any i∈I and any δ⊂_iα, δ<q_iβ holds, and α≤q_∞β holds.