On quadratic variations of the fractional-white wave equation

This paper studies the behaviour of quadratic variations of a stochastic wave equation driven by a noise that is white in space and fractional in time. Complementing the analysis of quadratic variations in the space component carried out by M. Khalil and C. A. Tudor (2018) and by R. Shevchenko, M. Slaoui and C. A. Tudor (2020), it focuses on the time component of the solution process. For different values of the Hurst parameter a central and a noncentral limit theorems are proved, allowing to construct consistent parameter estimators and compare them to the finding in the space-dependent case. Finally, rectangular quadratic variations in the white noise case are studied and a central limit theorem is demonstrated. 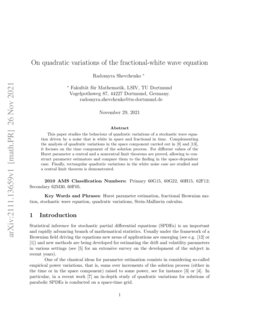 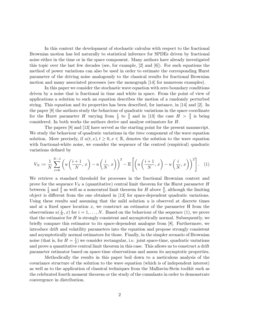 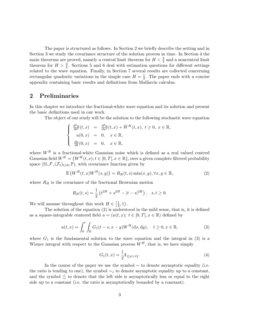 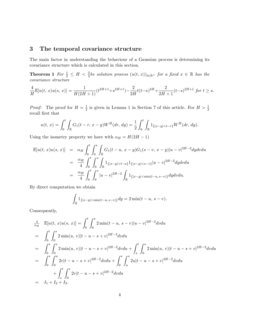 We analyze the generalized k-variations for the solution to the wave equ...
Radomyra Shevchenko, et al. ∙

Statistical inference for stochastic partial differential equations (SPDEs) is an important and rapidly advancing branch of mathematical statistics. Usually under the framework of a Brownian field driving the equations new areas of applications are emerging (see e.g.

[12] or [1]) and new methods are being developed for estimating the drift and volatility parameters in various settings (see [5] for an extensive survey on the development of the subject in recent years).

One of the classical ideas for parameter estimation consists in considering so-called empirical power variations, that is, sums over increments of the solution process (either in the time or in the space component) raised to some power, see for instance [3] or [4]. In particular, in a recent work [7] an in-depth study of quadratic variations for solutions of parabolic SPDEs is conducted on a space-time grid.

In this context the development of stochastic calculus with respect to the fractional Brownian motion has led naturally to statistical inference for SPDEs driven by fractional noise either in the time or in the space component. Many authors have already investigated this topic over the last few decades (see, for example, [2] and [6]). For such equations the method of power variations can also be used in order to estimate the corresponding Hurst parameter of the driving noise analogously to the classical results for fractional Brownian motion and many associated processes (see the monograph [14] for numerous examples).

In this paper we consider the stochastic wave equation with zero boundary conditions driven by a noise that is fractional in time and white in space. From the point of view of applications a solution to such an equation describes the motion of a randomly perturbed string. This equation and its properties has been described, for instance, in [14] and [2]. In the paper [9] the authors study the behaviour of quadratic variations in the space coordinate for the Hurst parameter H varying from 12 to 34 and in [13] the case H>34 is being considered. In both works the authors derive and analyse estimators for H.

The papers [9] and [13] have served as the starting point for the present manuscript. We study the behaviour of quadratic variations in the time component of the wave equation solution. More precisely, if u(t,x),t≥0,x∈R, denotes the solution to the wave equation with fractional-white noise, we consider the sequence of the centred (empirical) quadratic variations defined by

We retrieve a standard threshold for processes in the fractional Brownian context and prove for the sequence VN a (quantitative) central limit theorem for the Hurst parameter H between 12 and 34 as well as a noncentral limit theorem for H above 34, although the limiting object is different from the one obtained in [13] for space-dependent quadratic variations. Using these results and assuming that the mild solution u is observed at discrete times and at a fixed space location x, we construct an estimator of the parameter H from the observations u(iN,x) for i=1,…,N. Based on the behaviour of the sequence (1), we prove that the estimator for H is strongly consistent and asymptotically normal. Subsequently, we briefly compare this estimator to its space-dependent analogue from [9]. Furthermore, we introduce drift and volatility parameters into the equation and propose strongly consistent and asymptotically normal estimators for those. Finally, in the simpler scenario of Brownian noise (that is, for H=12) we consider rectangular, i.e. joint space-time, quadratic variations and prove a quantitative central limit theorem in this case. This allows us to construct a drift parameter estimator based on space-time observations and assess its asymptotic properties.

Methodically the results in this paper boil down to a meticulous analysis of the covariance structure of the solution to the wave equation (which is of independent interest) as well as to the application of classical techniques from the Malliavin-Stein toolkit such as the celebrated fourth moment theorem or the study of the cumulants in order to demonstrate convergence in distribution.

The paper is structured as follows. In Section 2 we briefly describe the setting and in Section 3 we study the covariance structure of the solution process in time. In Section 4 the main theorems are proved, namely a central limit theorem for H<34 and a noncentral limit theorem for H>34. Sections 5 and 6 deal with estimation questions for different settings related to the wave equation. Finally, in Section 7 several results are collected concerning rectangular quadratic variations in the simple case H=12. The paper ends with a concise appendix containing basic results and definitions from Malliavin calculus.

In this chapter we introduce the fractional-white wave equation and its solution and present the basic definitions used in our work.

where WH is a fractional-white Gaussian noise which is defined as a real valued centred Gaussian field WH={WH(t,x);t∈[0,T],x∈R}

, over a given complete filtered probability space

(Ω,F,(Ft)t⩾0,P), with covariance function given by

where RH is the covariance of the fractional Brownian motion

The solution of the equation (2) is understood in the mild sense, that is, it is defined as a square-integrable centered field u=(u(t,x);t∈[0,T],x∈R) defined by

where G1 is the fundamental solution to the wave equation and the integral in (3) is a Wiener integral with respect to the Gaussian process WH, that is, we have simply

The main factor in understanding the behaviour of a Gaussian process is determining its covariance structure which is calculated in this section.

For 12≤H<34he solution process (u(t,x))t∈R+ for a fixed x∈R has the covariance structure

Using the isometry property we have with αH=H(2H−1)

By direct computation we obtain

Let us assume 2s−t<0 and analyse the three summands separately.

For the second summand we obtain

Finally, for the third summand we have

Adding up the summands we obtain the result. Let us turn to the case 2s−t≥0. The first summand is

The second summand is the same as above, and for the third summand we obtain

Summing up I1, I2 and I3 yields the same result.

There are several remarks to be made concerning this result. First, the covariance is independent of space. Moreover, since the solution is Gaussian it follows directly from the covariance formula that it is a self-similar process in time. It can also be concluded from the formula that the process u(⋅,x) has a version with continuous paths with Hölder index below H, since

for m∈N. The statement now follows by Kolmogorov’s continuity criterion.

Next statements are concerned with the asymptotics of the covariance.

In particular, we obtain for covariance of the increments:

Note that for i>j we can write the covariance function as follows:

with the following asymptotics for large k:

For the solution u of the wave equation we define its quadratic variation in time,

For simplicity let us denote ui:=u(iN,x) for some fixed x∈R.

Proof:   We have by reordering the sum and putting together the non-diagonal summands that appear twice

The non-diagonal summands with |i−j| less than a certain constant are at most of order N−4H−2 and can therefore be ignored in the asymptotics up to constants. We obtain

If H<34, k4H−4 is summable. To obtain the precise constant we recall that

One can easily see with Corollary 1 that the first two summands are of order N−4 while the third one is of order N−4H−1 and dominates the other two. Therefore, we have

Finally, for the diagonal we calculate

For H>34 the term N−4 is slower than N−4H−1, and the claim follows with nonzero limiting constants. More precisely, for H<34 we obtain

which defines the normalising constant.

Note that with the notation from [9], namely

Now we know which normalisation is needed to prove limit theorems. We consider FN:=VN√E[V2N]. For H<34 we have FN∼cN2H+12VN pointwise.

To establish the central limit theorem of the quadratic variations, we will use tools from the Malliavin-Stein framework. A short introduction of the necessary terminology and classical identities can be found in the Appendix. The principal statement necessary for the proof of the theorem is Theorem 5.2.6 in [10], which is a version of the fourth moment theorem. For convenience of the reader we recall it in the following.

, be a sequence of random variables belonging to the

qth Wiener chaos such that

From now on, fix x∈R and denote by H the Hilbert space associated to the Gaussian solution process (u(t,x))t∈[0,1]. This Hilbert space is defined as the closure of the set of indicator functions {1[0,t],t∈[0,1]} with respect to the inner product

using the product rule (7). Now we can formulate the central limit theorem for FN, the normalised version of VN.