An initial-boundary value problem for the n-dimensional wave equation is considered. A three-level explicit in time and conditionally stable 4th-order compact scheme constructed recently for n=2 and the square mesh is generalized to the case of any n≥ 1 and the rectangular uniform mesh. Another approach to approximate the solution at the first time level (not exploiting high-order derivatives of the initial functions) is suggested. New stability bounds in the mesh energy norms and the discrete energy conservation laws are given, and the 4th order error bound is rigorously proved. Generalizations to the cases of the non-uniform meshes in space and time as well as of the wave equation with variable coefficients are suggested. 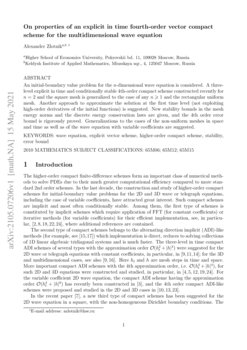 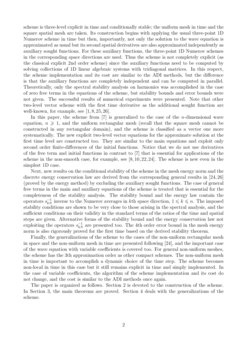 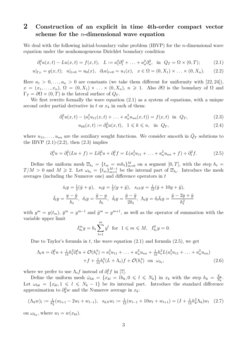 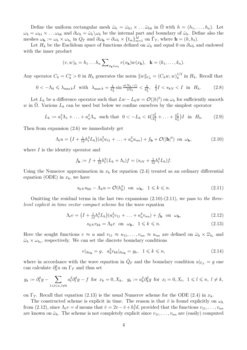 On compact 4th order finite-difference schemes for the wave equation

On the numerical approximations of the periodic Schrödinger equation

Uniform observability of the one-dimensional wave equation for non-cylindrical domains. Application to the control's support optimization

This work is concerned with the distributed controllability of the one-d...
Arthur Bottois, et al. ∙

The higher-order compact finite-difference schemes form an important class of numerical methods to solve PDEs due to their much greater computational efficiency compared to more standard 2nd order schemes. In the last decade, the construction and study of higher-order compact schemes for initial-boundary value problems for the 2D and 3D wave or telegraph equations, including the case of variable coefficients, have attracted great interest. Such compact schemes are implicit and most often conditionally stable. Among them, the first type of schemes is constituted by implicit schemes which require application of FFT (for constant coefficients) or iterative methods (for variable coefficients) for their efficient implementation, see, in particular, [2, 8, 18, 24, 22], where additional references are contained.

The second type of compact schemes belongs to the alternating direction implicit (ADI)-like methods (for example, see [15, 17]) which implementation is direct, reduces to solving collections of 1D linear algebraic tridiagonal systems and is much faster. The three-level in time compact ADI schemes of several types with the approximation order O(h2t+|h|4) were suggested for the 2D wave or telegraph equations with constant coefficients, in particular, in [9, 11, 14]; for the 3D and multidimensional cases, see also [9, 16]. Here ht and h are mesh steps in time and space. More important compact ADI schemes with the 4th approximation order, i.e. O(h4t+|h|4), for such 2D and 3D equations were constructed and studied, in particular, in [4, 5, 12, 19, 24]. For the variable coefficient 2D wave equation, the compact ADI scheme having the approximation order O(h2t+|h|6) has recently been constructed in [3], and the 4th order compact ADI-like schemes were proposed and studied in the 2D and 3D cases in [10, 13, 23].

In the recent paper [7], a new third type of compact schemes has been suggested for the 2D wave equation in a square, with the non-homogeneous Dirichlet boundary conditions. The scheme is three-level explicit in time and conditionally stable; the uniform mesh in time and the square spatial mesh are taken. Its construction begins with applying the usual three-point 1D Numerov scheme in time but then, importantly, not only the solution to the wave equation is approximated as usual but its second spatial derivatives are also approximated independently as auxiliary sought functions. For these auxiliary functions, the three-point 1D Numerov schemes in the corresponding space directions are used. Thus the scheme is not completely explicit (as the classical explicit 2nd order scheme) since the auxiliary functions need to be computed by solving collections of 1D linear algebraic systems with tridiagonal matrices. In this respect, the scheme implementation and its cost are similar to the ADI methods, but the difference is that the auxiliary functions are completely independent and can be computed in parallel. Theoretically, only the spectral stability analysis on harmonics was accomplished in the case of zero free terms in the equations of the scheme, but stability bounds and error bounds were not given. The successful results of numerical experiments were presented. Note that other two-level vector scheme with the first time derivative as the additional sought function are well-known, for example, see [1, 8, 25, 26].

In this paper, the scheme from [7] is generalized to the case of the n-dimensional wave equation, n⩾1

, and the uniform rectangular mesh (recall that the square mesh cannot be constructed in any rectangular domain), and the scheme is classified as a vector one more systematically. The new explicit two-level vector equations for the approximate solution at the first time level are constructed too. They are similar to the main equations and exploit only second order finite-differences of the initial functions. Notice that we do not use derivatives of the free term and initial functions in contrast to

Next, new results on the conditional stability of the scheme in the mesh energy norm and the discrete energy conservation law are derived from the corresponding general results in [24, 26] (proved by the energy method) by excluding the auxiliary sought functions. The case of general free terms in the main and auxiliary equations of the scheme is treated that is essential for the completeness of the stability analysis. The stability bound and the energy law contain the operators s−1kN inverse to the Numerov averages in kth space direction, 1⩽k⩽n. The imposed stability conditions are shown to be very close to those arising in the spectral analysis, and the sufficient conditions on their validity in the standard terms of the ratios of the time and spatial steps are given. Alternative forms of the stability bound and the energy conservation law not exploiting the operators s−1kN are presented too. The 4th order error bound in the mesh energy norm is also rigorously proved for the first time based on the derived stability theorem.

Finally, the generalizations of the scheme to the cases of the non-uniform rectangular mesh in space and the non-uniform mesh in time are presented following [24], and the important case of the wave equation with variable coefficients is covered too. For general non-uniform meshes, the scheme has the 3th approximation order as other compact schemes. The non-uniform mesh in time is important to accomplish a dynamic choice of the time step. The scheme becomes non-local in time in this case but it still remains explicit in time and simply implemented. In the case of variable coefficients, the algorithm of the scheme implementation and its cost do not change, and the cost is similar to the ADI methods once again.

The paper is organized as follows. Section 2 is devoted to the construction of the scheme. In Section 3, the main theorems are proved. Section 4 deals with the generalizations of the scheme.

We first rewrite formally the wave equation (2.1) as a system of equations, with a unique second order partial derivative in t or xk in each of them:

Define the uniform mesh ¯¯¯ωht={tm=mht}Mm=0 on a segment [0,T], with the step ht=T/M>0 and M⩾2. Let ωht={tm}M−1m=1 be the internal part of ¯¯¯ωht. Introduce the mesh averages (including the Numerov one) and difference operators in t

with ym=y(tm), ˇym=ym−1 and ^ym=ym+1, as well as the operator of summation with the variable upper limit

where we prefer to use Λtf instead of ∂2tf in [7].

Define the uniform mesh ¯ωhk={xkl=lhk,0⩽l⩽Nk} in xk with the step hk=XkNk. Let ωhk={xkl,1⩽l⩽Nk−1} be its internal part. Introduce the standard difference approximation to ∂2kw and the Numerov average in xk:

Any operator Ch=C∗h>0 in Hh generates the norm ∥w∥Ch=(Chw,w)1/2h in Hh. Recall that

Let Lh be a difference operator such that Lw−Lhw=O(|h|2) on ωh for sufficiently smooth w in ¯Ω. Various Lh can be used but below we confine ourselves by the simplest operator

Then from expansion (2.6) we immediately get

where I is the identity operator and

Using the Numerov approximation in xk for equation (2.4

) treated as an ordinary differential equation (ODE) in

Omitting the residual terms in the last two expansions (2.10)-(2.11), we pass to the three-level explicit in time vector compact scheme for the wave equation

Here the sought functions v≈u and v11≈u11,…,vnn≈unn are defined on ¯ωh×¯¯¯ωht and ¯ωh×ωht, respectively. We can set the discrete boundary conditions

The constructed scheme is explicit in time. The reason is that ^v is found explicitly on ωh from (2.12), since Λtv=d means that ^v=2v−ˇv+h2td, provided that the functions v11,…,vnn are known on ¯ωh. The scheme is not completely explicit since v11,…,vnn are (easily) computed from 1D difference equations (2.13) with the boundary conditions from (2.14) by solving the collections of corresponding linear algebraic systems with tridiagonal matrices. In this respect, the implementation is similar to the ADI methods. But the difference is that the functions vm11,…,vmnn are independent and can be computed not sequentially but in parallel when vm is known. Moreover, there is no need to store all of them simultaneously since only their weighted sum is used to compute vm+1, for m=0,…,M−1.

We need also to define v1 at the first time level t=ht with the 4th order of accuracy. This can be done explicitly by using Taylor’s formula and the wave equation, for example, see [2, 5, 7, 18]. But these formulas involve higher-order derivatives (or differences) of the initial functions u0 and u1 that is inconvenient in the non-smooth case. We prefer to avoid this and proceed alternatively following [24, 25] and construct the explicit equation for v1 in the form close to (2.12)-(2.13):

with suitable u1h≈u1 and f0h≈f|t=0. The values of v0kk on ∂ωh can be taken as in (2.14) (or according to the values of ∂2ku0 on ∂Ω). See additional arguments in favor of these equations for v1 after the proof of Theorem 3.2 below.

For the given functions

below), the following estimate for the approximation error of equation (

If u0 is smooth and known analytically, then equation (2.15) can be simplified as

To study stability in more detail, we need to take the inhomogeneous version of equations (2.13) and (2.16):

where b1,…,bn are given functions. Note that in practice these functions are never identically zero due to the round-off errors in computations, so their influence on the solution have to be studied. This is also necessary to derive an error bound below.

To state the stability theorem, we introduce the following self-adjoint operator

for 1⩽m⩽M, are valid. Here

Then the following stability bound

and the discrete energy conservation law (that entails the stability bound)

as well). In this method, one can consider the system of eigenvectors of the operator

are the corresponding eigenvalues of the operator