We present a new class of binary words: the prefix normal words. They are defined by the property that for any given length k, no factor of length k has more a's than the prefix of the same length. These words arise in the context of indexing for jumbled pattern matching (a.k.a. permutation matching or Parikh vector matching), where the aim is to decide whether a string has a factor with a given multiplicity of characters, i.e., with a given Parikh vector. Using prefix normal words, we give the first non-trivial characterization of binary words having the same set of Parikh vectors of factors. We prove that the language of prefix normal words is not context-free and is strictly contained in the language of pre-necklaces, which are prefixes of powers of Lyndon words. We discuss further properties and state open problems. 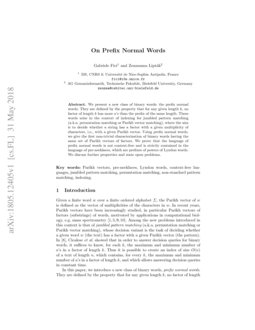 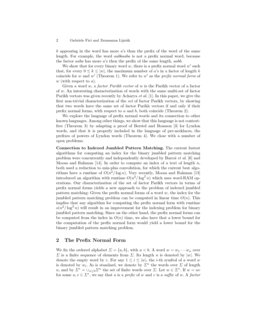 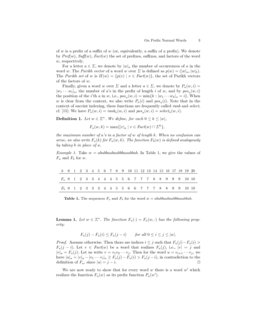 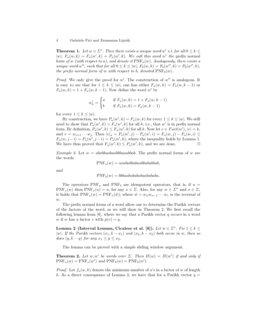 A prefix normal word is a binary word with the property that no substrin...
Péter Burcsi, et al. ∙

A flip-swap language is a set S of binary strings of length n such that ...
Joe Sawada, et al. ∙

An n-length binary word is q-decreasing, q≥ 1, if every of its length ma...
Jean-Luc Baril, et al. ∙

We construct an infinite word w over the 5-letter alphabet such that for...
Golnaz Badkobeh, et al. ∙

In this paper, we introduce a new class of binary words, prefix normal words. They are defined by the property that for any given length k, no factor of length k appearing in the word has more a’s than the prefix of the word of the same length. For example, the word aabbaaba is not a prefix normal word, because the factor aaba has more a’s then the prefix of the same length, aabb.

We show that for every binary word w, there is a prefix normal word w′ such that, for every 0≤k≤|w|, the maximum number of a’s in a factor of length k coincide for w and w′ (Theorem 2.1). We refer to w′ as the prefix normal form of w (with respect to a).

We explore the language of prefix normal words and its connection to other known languages. Among other things, we show that this language is not context-free (Theorem 3.1) by adapting a proof of Berstel and Boasson [3] for Lyndon words, and that it is properly included in the language of pre-necklaces, the prefixes of powers of Lyndon words (Theorem 4.1). We close with a number of open problems.

We fix the ordered alphabet Σ={a,b}, with a<b. A word w=w1⋯wn over Σ is a finite sequence of elements from Σ. Its length n is denoted by |w|. We denote the empty word by ε. For any 1≤i≤|w|, the i-th symbol of a word w is denoted by wi. As is standard, we denote by Σn the words over Σ of length n, and by Σ∗=∪n≥0Σn the set of finite words over Σ. Let w∈Σ∗. If w=uv for some u,v∈Σ∗, we say that u is a prefix of w and v is a suffix of w. A factor of w is a prefix of a suffix of w (or, equivalently, a suffix of a prefix). We denote by Pref(w), Suff(w), Fact(w) the set of prefixes, suffixes, and factors of the word w, respectively.

the maximum number of a’s in a factor of w of length k. When no confusion can arise, we also write Fa(k) for Fa(w,k). The function Fb(w) is defined analogously by taking b in place of a.

Take w=ababbaabaabbbaaabbab. In Table 1, we give the values of Fa and Fb for w.

We are now ready to show that for every word w there is a word w′ which realizes the function Fa(w) as its prefix function Pa(w′).

Let w=ababbaabaabbbaaabbab. The prefix normal forms of w are the words

The prefix normal forms of a word allow one to determine the Parikh vectors of the factors of the word, as we will show in Theorem 2.2. We first recall the following lemma from [8], where we say that a Parikh vector q occurs in a word w if w has a factor v with p(v)=q.

The lemma can be proved with a simple sliding window argument.

There is a simple geometrical construction for computing the prefix normal forms of a word w, and hence, by Theorem 2.2, the set Π(w) of Parikh vectors occurring in w. An example of this construction is given in Fig. 1.

The region is connected by Lemma 2, in the sense that all internal points belong to Π(w). The prefix normal forms PNFa(w) and PNFb(w) are obtained by connecting the upper and the lower points of the region, respectively.

3 The Language of Prefix Normal Words

In this section, we take a closer look at those words which are in prefix normal form, which we refer to as prefix normal words. For simplicity of exposition, from now on we only refer to prefix normality with respect to the letter a.

The following proposition gives some characterizations of prefix normal words. Recall that Pa(w,i)=|w1⋯wi|a is the number of a’s in the prefix of length i, and posa(w,i)=min{k:|w1⋯wk|a=i} is the position of the i’th a. When no confusion can arise, we write simply Pa(i) and posa(i). In particular, we have Pa(posa(i))=i and posa(Pa(i))≤i.

We now give some simple facts about the language La.

Let La be the language of prefix normal words. .

La is not context-free.

Recall that Ogden’s iteration lemma (see e.g. [2]) states that, for every context-free language L there exists an integer N such that, for any word w∈L and for any choice of at least N distinguished positions in w, there exists a factorization w=xuyvz such that

Now, assume that the language La is context-free, and consider the word w=aN+1baNbaN+1 where N is the constant of Ogden’s Lemma. It is easy to see that w∈La. Distinguish the central run of N letters a. We claim that for every factorization w=xuyvz of w, pumping u and v eventually results in a word in which the first run of a’s is not the longest one. Such a word cannot belong to La.

If x,u,y each contain at least one distinguished position, then u is non-empty and it is contained in the central run of a’s. Now observe that every word obtained by pumping u and v is prefixed by aN+1b. Pumping u and v, we then get a word aN+1bams, for some word s, where m>N+1. This word is not in La.

Suppose now that y,v,z each contain at least one distinguished position. Then v is non-empty and it is contained in the central run of a’s.

In this section, we explore the relationship between the language La of prefix normal words and some known classes of words defined by means of lexicographic properties.

A power of a Lyndon word is called a prime word [11] or necklace (see [4] for more details and references on this definition).

The next proposition shows that any prefix normal word different form a power of the letter b is a prefix of a Lyndon word.

We have to prove that any non-empty suffix of wb|w| is greater than wb|w|. Suppose by contradiction that there exists a non-empty suffix v of wb|w| that is smaller than wb|w|, and let u be the longest common prefix between v and wb|w|. This implies that u is followed by different letters when it appears as prefix of v and as prefix of wb|w|. Since we supposed that v is smaller than wb|w|, we conclude that ub is prefix of wb|w| and ua is prefix of v. Since ua is a factor of wb|w| ending with a, ua must be a factor of w and therefore ub is a prefix of w. Thus the factor ua of w has one more a than the prefix ub of w, contradicting the fact that w is a prefix normal word. ∎

We can now state the following result.

Every prefix normal word is a pre-necklace. That is, La⊂PL.

If w is of the form bn, n≥1, then w is a power of the Lyndon word b. Otherwise, w contains at least one a and the claim follows by Proposition 3. ∎

The languages La and PL, however, do not coincide. The shortest word in PL that does not belong to La is w=aabbabaa. Below we give the table of the number of words in La of each length, up to 16, compared with that of pre-necklaces. This latter sequence is listed in Neil Sloane’s On-Line Encyclopedia of Integer Sequences [17].

An interesting question is how to characterize two words that have the same prefix normal form. The classes of this equivalence do not seem to follow regular patterns. For example, the words aabababa, aabbaaba, abaababa, abaabbaa, ababaaba, abababaa all have the same prefix normal form aabababa, so that no simple statement about the lengths of the runs of the two letters seems to provide a characterization of the classes. This example also shows that the prefix normal form of a word w is in general more complicated that just a rotation of w or of its reversal (which is in fact the case for small lengths).

Many open problems remain. Among these, the questions regarding the prefix normal equivalence were explored in Section 5: How can we characterize two words that have the same prefix normal form? Can we say anything about the number or the size of equivalence classes for a given word length?

Another open problem is to find an algorithm for testing whether a word is in prefix normal form. The best offline algorithms at the moment are the ones for computing an index for the jumbled pattern matching problem, and thus the prefix normal form

[6, 14, 13]; these have running time O(n2/logn) for a word of length n, or O(n2/log2n) in the word-RAM model. However, testing may be easier than actually computing the PNF. Note also that Lemma 3 gives us an online testing algorithm, with time complexity O(n2). Another, similar, online testing algorithm is provided by condition 4. of Proposition 1, with running time O(|w|2a), which is, of course, again O(n2) in general.

We would like to thank Bill Smyth for interesting discussions on prefix normal words. We are also grateful to an anonymous referee who helped us improve the proof of Theorem 3.