On point estimators for Gamma and Beta distributions

Let X_1,…,X_n be a random sample from the Gamma distribution with density f(x)=λ^αx^α-1e^-λ x/Γ(α), x>0, where both α>0 (the shape parameter) and λ>0 (the reciprocal scale parameter) are unknown. The main result shows that the uniformly minimum variance unbiased estimator (UMVUE) of the shape parameter, α, exists if and only if n≥ 4; moreover, it has finite variance if and only if n≥ 6. More precisely, the form of the UMVUE is given for all parametric functions α, λ, 1/α and 1/λ. Furthermore, a highly efficient estimating procedure for the two-parameter Beta distribution is also given. This is based on a Stein-type covariance identity for the Beta distribution, followed by an application of the theory of U-statistics and the delta-method. MSC: Primary 62F10; 62F12; Secondary 62E15. Key words and phrases: unbiased estimation; Gamma distribution; Beta distribution; Ye-Chen-type closed-form estimators; asymptotic efficiency; U-statistics; Stein-type covariance identity; delta-method. 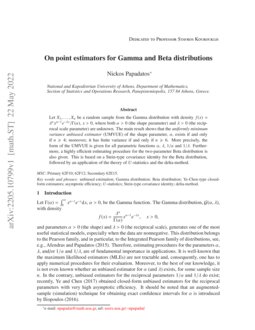 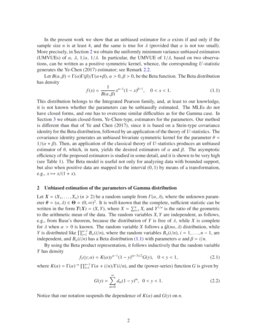 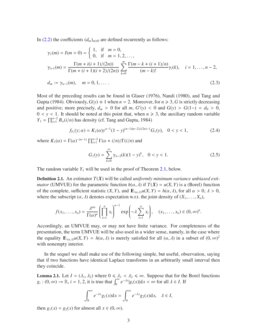 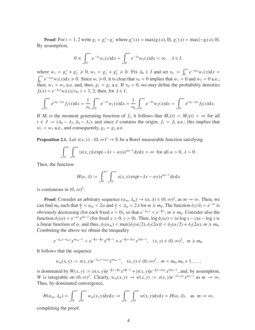 The statistical properties of RCTs and a proposal for shrinkage

We abstract the concept of a randomized controlled trial (RCT) as a trip...
Erik van Zwet, et al. ∙

Predicting the scoring time in hockey

Relation between Blomqvist's beta and other measures of concordance of copulas

An investigation is presented of how a comprehensive choice of four most...
Damjana Kokol Bukovšek, et al. ∙

and parameters α>0 (the shape) and λ>0 (the reciprocal scale), generates one of the most useful statistical models, especially when the data are nonnegative. This distribution belongs to the Pearson family, and in particular, to the Integrated Pearson family of distributions, see, e.g., Afendras and Papadatos (2015). Therefore, estimating procedures for the parameters α, λ, and/or 1/α and 1/λ, are of fundamental importance in applications. It is well-known that the maximum likelihood estimators (MLEs) are not tractable and, consequently, one has to apply numerical procedures for their evaluation. Moreover, to the best of our knowledge, it is not even known whether an unbiased estimator for α (and λ) exists, for some sample size n. In the contrary, unbiased estimators for the reciprocal parameters 1/α and 1/λ

do exist; recently, Ye and Chen (2017) obtained closed-form unbiased estimators for the reciprocal parameters with very high asymptotic efficiency. It should be noted that an augmented-sample (simulation) technique for obtaining exact confidence intervals for

In the present work we show that an unbiased estimator for α exists if and only if the sample size n is at least 4, and the same is true for λ (provided that α is not too small). More precisely, in Section 2 we obtain the uniformly minimum variance unbiased estimators (UMVUEs) of α, λ, 1/α, 1/λ. In particular, the UMVUE of 1/λ, based on two observations, can be written as a positive symmetric kernel, whence, the corresponding U-statistic generates the Ye-Chen (2017) estimator; see Remark 2.2.

This distribution belongs to the Integrated Pearson family, and, at least to our knowledge, it is not known whether the parameters can be unbiasedly estimated. The MLEs do not have closed forms, and one has to overcome similar difficulties as for the Gamma case. In Section 3 we obtain closed-form, Ye-Chen-type, estimators for the parameters. Our method is different than that of Ye and Chen (2017), since it is based on a Stein-type covariance identity for the Beta distribution, followed by an application of the theory of U-statistics. The covariance identity generates an unbiased bivariate symmetric kernel for the parameter θ=1/(α+β). Then, an application of the classical theory of U-statistics produces an unbiased estimator of θ, which, in turn, yields the desired estimators of α and β. The asymptotic efficiency of the proposed estimators is studied in some detail, and it is shown to be very high (see Table 1). The Beta model is useful not only for analyzing data with bounded support, but also when positive data are mapped to the interval (0,1) by means of a transformation, e.g., x↦x/(1+x).

2 Unbiased estimation of the parameters of Gamma distribution

Let \boldmathX=(X1,…,Xn) (n≥2) be a random sample from Γ(α,λ), where the unknown parameter \boldmathθ=(α,λ)∈\boldmathΘ=(0,∞)2. It is well-known that the complete, sufficient statistic can be written in the form \boldmathT(\boldmathX)=(X,Y), where X=∑ni=1Xi and Y1/n

is the ratio of the geometric to the arithmetic mean of the data. The random variables

By using the Beta product representation, it follows inductively that the random variable Y has density

Notice that our notation suspends the dependence of K(α) and G(y) on n.

In (2.2) the coefficients (dm)m≥0 are defined recurrently as follows:

The random variable Y1 will be used in the proof of Theorem 2.1, below.

An estimator T(\boldmathX) will be called uniformly minimum variance unbiased estimator (UMVUE) for the parametric function h(α,λ) if T(\boldmathX)=u(X,Y) is a (Borel) function of the complete, sufficient statistic (X,Y), and \rm IE (α,λ)u(X,Y)=h(α,λ), for all α>0, λ>0, where the subscript (α,λ) denotes expectation w.r.t. the joint density of (X1,…,Xn),

Accordingly, an UMVUE may, or may not have finite variance. For completeness of the presentation, the term UMVUE will be also used in a wider sense, namely, in the case where the equality \rm IE (α,λ)u(X,Y)=h(α,λ) is merely satisfied for all (α,λ) in a subset of (0,∞)2 with nonempty interior.

In the sequel we shall make use of the following simple, but useful, observation, saying that if two functions have identical Laplace transforms in an arbitrarily small interval then they coincide.

, we may define the probability densities

is the moment generating function of

It follows that the sequence

Let h(α):(0,∞)→R be a parametric function of the shape parameter. If there exists an unbiased estimator U1=U1(\boldmathX) for h, then the UMVUE of h(α) is a function of Y, alone.

for all α>0, λ>0. This relation can be rewritten in the form

The right-hand side of (2.7) defines a continuous function of α>0, because

(A consequence to the Cramér-Rao bound). The Fisher information matrix based on a single observation from G(α,λ) is given by

where ψ1(α)=(logΓ(α))′′>1/α. The Cramér-Rao (CR) bound says that for any unbiased estimator T=T(\boldmathX) of the parametric function h(α,λ), n\rm Var T≥(∇h(α,λ))TJ−1∇h(α,λ). Hence, in the particular case where h=h(α) is a parametric function of the shape parameter alone (i.e., h does not depend on λ), the CR bound takes the form

We shall now show that Proposition 2.2 yields a better lower bound. Indeed, since the UMVUE of h(α) is a Borel function of Y, say u=u(Y), we can apply the CR bound, \rm Var u(Y)≥h′(α)2/JY, where JY is the Fisher information of Y. From (2.1), the density of Y is given by

It follows that for any unbiased estimator T(\boldmathX) of h(α),

Thus, excluding the trivial case where h(α) is the constant function, the lower bound in (2.9) is strictly larger than the CR bound of (2.8). This means that, for any given non-constant parametric function h(α), no efficient estimator exists, when efficiency is defined in the traditional way, i.e., in terms of attainability of the bound in (2.8). In the contrary, there are functions of the shape parameter that can be efficiently estimated in the sense of (2.9). More precisely, it can be checked that for any constants c1,c2, the parametric function , where ψ(α)=Γ′(α)/Γ(α), is efficiently estimated by T(\boldmathX)=u(Y)=(c1/n)logY+c2, in the sense that \rm IE (α,λ)T(\boldmathX)=h(α) for all α,λ, and n\rm Var T(\boldmathX)=c21(ψ1(α)−n−1∑n−1i=1ψ1(α+i/n)), which is equal to the lower bound given by (2.9). Finally, it can be easily verified that all efficiently estimated functions are of the above form. Notice, however, that asymptotically the lower bounds do coincide, since, by the Riemann integral, limn→∞n−1∑n−1i=1ψ1(α+i/n)=∫α+1αψ1(t)dt=1/α.

We now state the main result of this section. To the best of our knowledge, this result, as well as the existence of u0, below, is new.

Proof: According to Proposition 2.2, if an unbiased estimator (of α) exists, the UMVUE must be a function of Y, say u(Y). Then, the relation \rm IE αu(Y)=α can be written as

for all α>0. Since we have assumed that \rm IE α|u(Y)|<∞ for all α>0, we may apply Fubini’s theorem to the right-hand side of the above equation, obtaining

since the left-hand side of the above equation approaches 1 as y→1−.

where, since dm>0, the interchanging of summation and integration is justified by Beppo Levi’s theorem. It remains to verify that